Hope you guys don’t mind me doing a bit of bragging. Our combined AMPS IPMS group did well at Nationals… We were entered in several aircraft categories (1/48 single engine prop) several armor categories (1/72 and 1/35) two auto categories, and figures/busts. Our lone aircraft entrant came away with 3 1st and 1 2nd. Our 1/72 armor guy also did exceptionally well with 3 1st and 1 3rd. Including on in the scratchbuilt/conversion category. In 1/35 I received a 1st and our car and figures entrants each came away with a 3rd.

Here’s my winning entry along with the award. 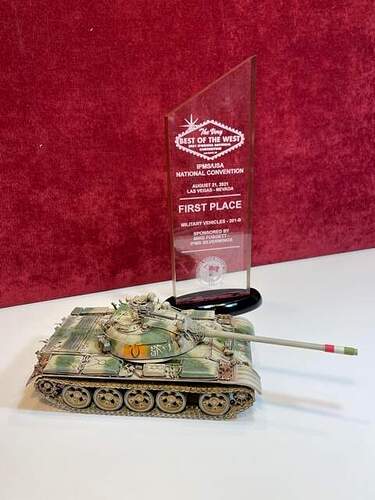 The specific category was non NATO/Warsaw Pact/Russian by markings. Posted this build a while back. It’s a MiniArt kit of Polish production T55A used by the Iraqi’s and subsequently captured and used by the Iranians during their war with Iraq.

Thanks for looking and letting me brag a bit.

Anybody else go and have anything to show. Would love to see your builds.

Congratulations on the award and your clubs good showing.

Three of my entries appear in Andy’s video, including my winning entry.

What mark in the video? Any photos you can post?