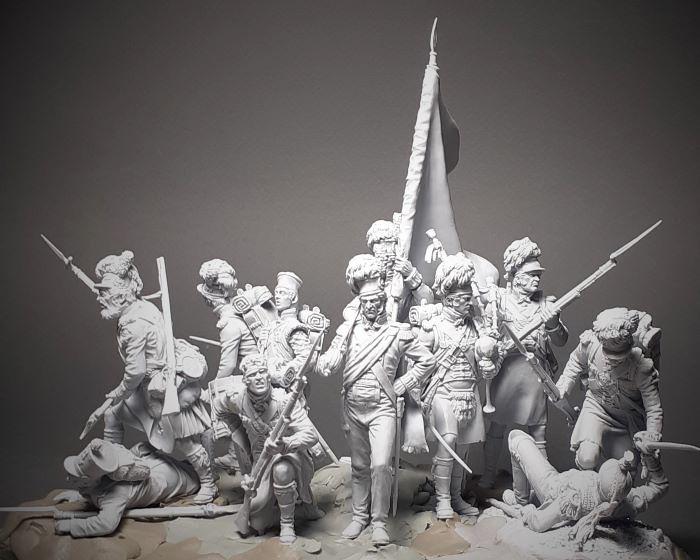 Like a fish out of water I am completely out of my element starting this set. The Battle of Waterloo is not my normal area of study, nor are the bright and brilliant colors something I’m use to painting. In fact, I’ve never done anything so elaborate or complex as this set of figures in such tight proximity to each other, or this color scheme. The sculpting is really impressive, to say the least. I can only hope I do it justice in the end.

So, rather than dip my big toe in the pool, I dove right into the deep end, head first. What else was I gonna do? I felt drawn to this set as soon as I saw it offered. It was a serious toss up over a few days of angst as to whether I would build a 1/35th scale UH-1N with a weapons load crew or this set of “Black Watch” figures at Waterloo. I had both scenarios laid out on the bench as I pondered each. Once my mind was made up it was straight off to research, and thankfully, Alexandre Khokhriakov and Castle Miniatures themselves provided plenty of study material.

I figured if I could knock out a decent rendition of a Denison Smock camo pattern, I should be able to handle the Black Watch Campbell tartan, and the battle flag, and socks. Well, we’ll soon find out, won’t we? HA! I’ve watched a few gals paint flags for miniatures on YT, they’re incredible. These gals got talent, so I will be using their work as reference material on that portion of this build. This is all new to me! 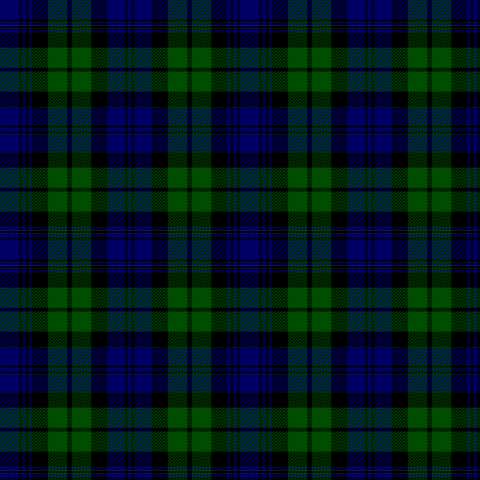 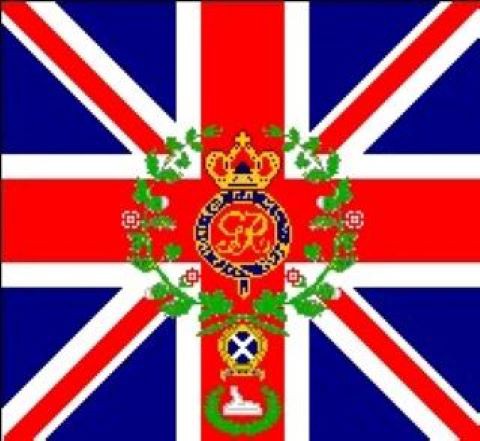 Eleven figures complete this dynamic battle scene, all cast in resin. I was impressed with how clean these figures were and the lack of any major issues to deal with. A little time spent carefully removing any seem lines or slag is all I’m finding necessary to get these figures ready for the brush. I decided to keep some kind of order with all these little parts by using a half pint mason jar crate with some added foam padding at the bottom of each divided section. I numbered these guys as they were being cleaned up and worked, just to keep track of who gets what part. So far, so good. After cleaning three figures I decided to get started on the flag. I wanted to work the emblems and details in between the figure clean-up, (oils take time to dry), so I can spend as much time needed to get this flag correct. There’s going to be a lot of freehand work here and quite a bit of trial and error as well. I’ll seal the oils on this flag in a few days when it’s complete, then start laying out the emblems on both sides. This is gonna be a hoot, I can already tell. Wish me luck!

The basic layout of the colors was not too difficult, but only a matter of keeping every section in proper proportion. Tamiya’s model tape really helped work around those curves. I used Vallejo’s Model Colors; Red, Blue, and White acrylics for the base tones. Next was the standard oil applications of shadows and highlights. There are still a few areas of the white stripes that need attention, but this first side is pretty much complete. You can see the new palette of colors I have spread out for this project, mostly Windsor Newton oils. 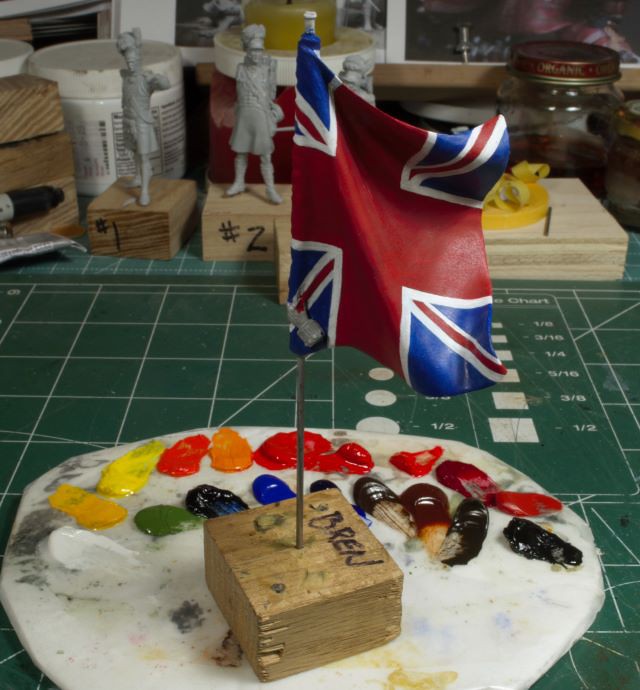 I’m actually pretty excited to be working this set, it’s a challenge. How do we expand our talent, challenge the norm, work it and keep learning? And there you have it, and therefore,………… I forge onward😉

More to follow soon and thanks for watchin. Cheers, Ski.

Oh man…. That is one serious collection of figures. I’ll be sticking around for this one for sure.

Oh. these are lovely. Can’t see them on Castle miniature website though.

Pedantic pants on: the 42nd didn’t take part in the Waterloo battle, they were so badly mauled two days before at Quatre Bras. Actually, My pedantic pants are not totally sure of this.

Oh man…. That is one serious collection of figures. I’ll be sticking around for this one for sure.

Thanks, my Canadian Brother! This will be a fun run, I can tell already, lol.

Thanks for stopping in, Tank

Oh. these are lovely. Can’t see them on Castle miniature website though.

Pedantic pants on: the 42nd didn’t take part in the Waterloo battle, they were so badly mauled two days before at Quatre Bras. Actually, My pedantic pants are not totally sure of this.

I hear what you’re saying, Mouse. You are more than likely spot on. There’s been a lot of discussion on Planetfigure about this very thing. I am only running with the sculptor’s impression and how he labelled the set.

This is a monumental undertaking as far as I’m concerned. Not my era either but those uniforms can’t be easy to paint. I’ll be following this

Thanks MH, gonna be a real hoot, but a fun hootin ditty ta boot, HA! Thanks for watching.

This is a monumental undertaking as far as I’m concerned. Not my era either but those uniforms can’t be easy to paint. I’ll be following this

those uniforms can’t be easy to paint.

And he is not taking the easy way out with the big scale but small with 54mm/ 1/35 scale.

My buddy, Steve Reedees sent me a pair of #8 reading glasses from England, couldn’t find any better than a #6 here in the states. My nose will really be into my work, HA! I’ll keep yall posted as I go along

Epic project!I’m curious how your kilt will come out …

Epic project!I’m curious how your kilt will come out …

Me too, HA! Thanks for watchin

Yall got some funky terms for common things. Does bonnet ring a bell, or the boot? Two cousin nations divided by a common language,

P.S. I just printed up the emblems/cyphers on a word doc, shrink to fit, then I will do an overlay and see how that works. that circle is a doozy!

Does bonnet ring a bell, or the boot?

Aye, a bonnet is a hat, but not the same as the Ostrich feather ones your figures are wearing. Looks more like a beret type thing.

Only boots I know are the ones on your feet.

Kilt bits all have a name too

Lol, but when we were in Oxford, England in '02 wo got a learnin of what things are really called.

I finished oiling the other side of the flag. It’s not real clear, but the shadows and highlights have been completed. I gave the flag three days to dry, then applied a dull coat to seal the work. I will begin playing with how to paint the emblems on the flag today. This is going to stretch my abilities, but I’m game. 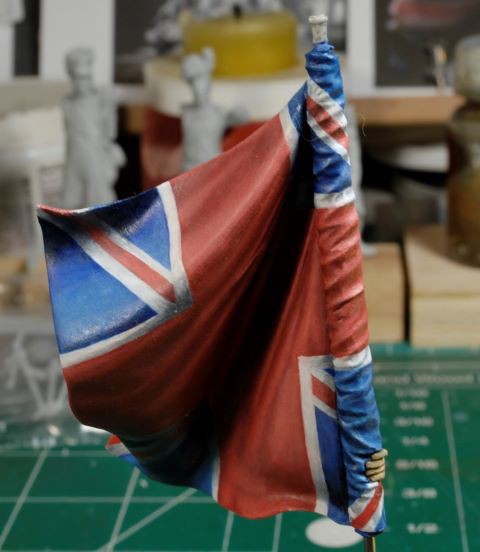 While waiting for the flag to dry completely I continued with prepping the figures. Next up, the Bag Piper, oh boy! There are so many delicate parts on that pipe I really have to take my time. This is gonna be a hoot, cause I’m really not into replacing broken parts. 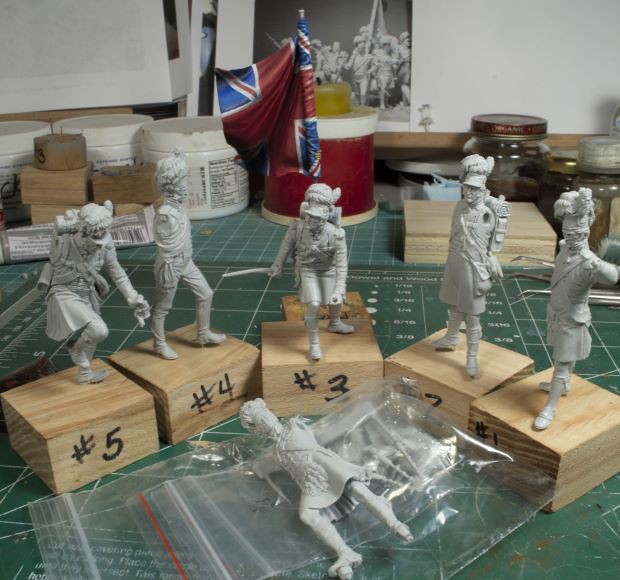 I’ve decided to try and place a printed decal over the flag and mark the key points for reference. Not sure how this will work, but I’m going to get it figured out. If you’ve ever watched these gals paint flags, you’ll be amazed.

My wife watched these videos and said “Women put on war-paint every day, of course they can paint like this.”
I recon she’s right, HA! These gals have an incredible talent, to say the least.

Not hardly, are ya kidin me??? I’m going to see firsthand how tough this paint job really is. Maybe I should take a nap first, lol I’m exhausted thinking about it

Oh-that was a joke !! Full respect for painting - I can’t do it!

I knew that Bro, just messin with ya, lol. I’ve heard the suggestion of using a silk flag, but that wouldn’t be as much fun. I wouldn’t be throwing stuff around the model bunker in frustration, how boring.HA!