Hi,
still working on vegetation. I put all the experimentations on this base to see what happens. As the vegetation stuff for making dios is hard to get from here we must “shop” from the nature once again. Using a small base we put some garden (or aquarium) rocks to assemble the wall. Moss for the high grass and aspargus fern for the lower one (mixed with static grass). Acryllic paint with sand and glue for the soil and small things collected from the garden for details. The tree is a root from a local plant with leaves I have from a friend that brought to me from abroad. Adjust some infantry guys from 43th Wessex to add some life to the work. Hope you like it. 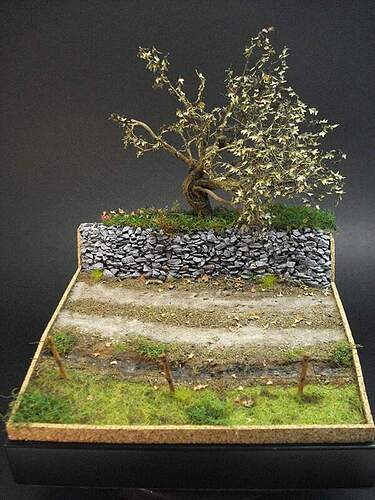 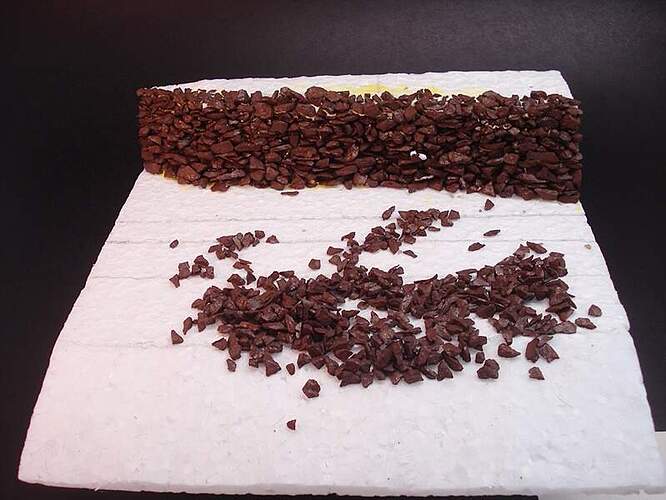 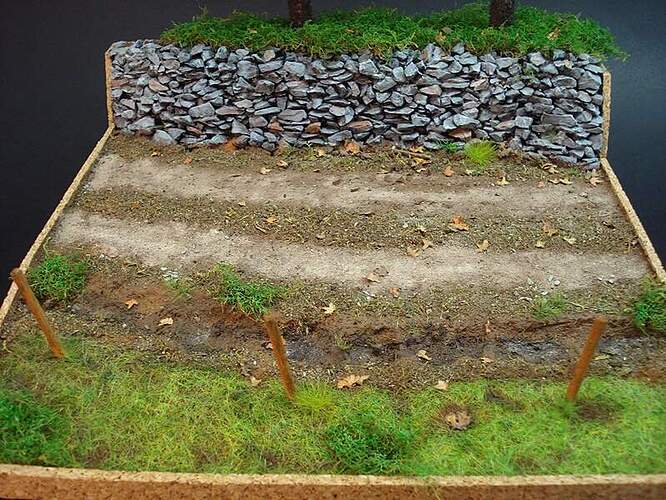 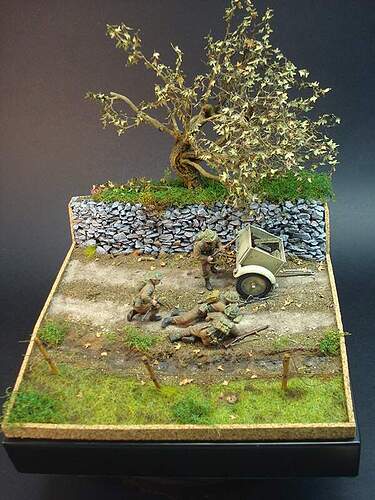 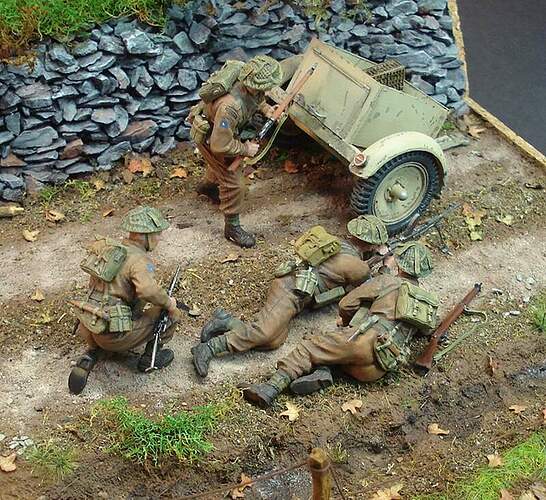 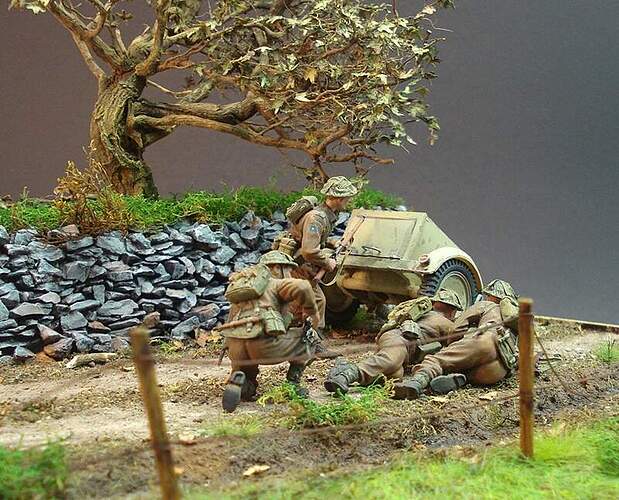 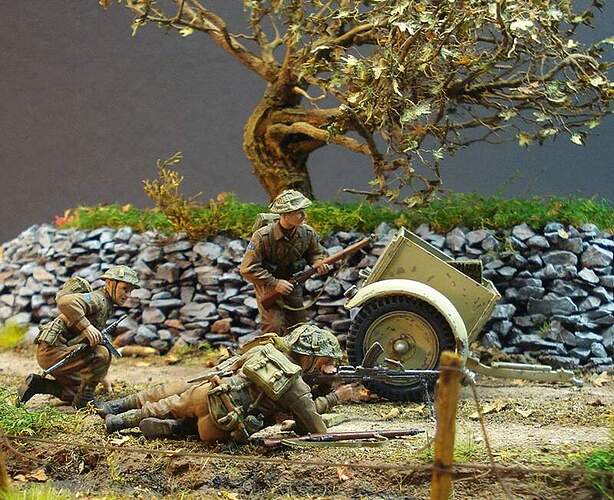 Some more details to be added, but…

Brilliant idea to use the aquarium rocks … They look the perfect scale … Add to shopping list !!

Lovely stuff- the wall really does set the scene superbly because as @Johnnych01 mentioned the material is just the right scale to create a realistic stone wall. The soldiers are well laid out in the display too with excellent painting.

But, just one thing : it’s a strange idea to put the riffle behind the Tommy on the right side.
Instinctively I’ll let my riffle in front of me , so I could pick it up fast if I should move quickly.
I’m in Army, so I look that with an “soldier’s eye” !

Gelson, a nice little scene; if I may though, a few queries/points: the small packs on the figures don’t appear to have the “L” straps (that actually support the pack and clip on to the front top of the ammo pouches. The end of the “L” straps are fastened on to 2 buckles on the bottom of the small pack. I don’t think you’ve depicted these.

I can’t quite discern the badges on the uniforms but in addition to the divisional flash, (and unit title which I think you’ve displayed) there should be some seniority stripes in red which would depict the unit’s position within the Brigade/Division. You may well have depicted them but I can’t quite see on the pictures given their size (and my dwindling eyesight!).

You have modelled some slings on the rifles but perhaps the NCO with the Sten should also have one fitted?

I hope you don’t think this is mere carping and no admonishment is intended at all; British '37 pattern webbing is tricky to model if one is unfamiliar with it.

Overall though, as I say, a lovely little model.

creading, Johnnych01 and Karl187!
Thank you for the kind comments.

Hi MaquetteGarden,
thanks to point this. My inttention was to put an assistant gunner on the bren gunner side but it lacks of the proper magazines. I will put some on the scene and reposition the rifle. You should excuse me because I’m not an infrantyman but a flak gunner.

Hi, BootsDMS!
Thank you to point all the issues on my british army 37 pattern webbing and badges approach. This four guys were not supposed to have the backpacks on. I should have done those straps you’e mentioned.
I’m sorry I can’t met the minimun standards required.
Best Regards

Gelson, honestly, no criticism - just an aknowledgement that British Army personal equipment is fiendishly difficult to get right; I am in no position to dictate any standards whatsoever and I hope that did not come across in my post.

As I also said, a superb, well constructed vignette; I always love the addition of abandoned German equipment. If I can ever help in clarifying some of the more complicated aspects of '37 Pattern webbing please let me know.

Please keep up the good work.

Hi, BootsDMS! I should have used some other figures to depict a scene like this. Germans probably will fit better. My try with British was not the best option of course due to my low knoledges about infantry equipment. I apologize to make such basic errors and would like to thank you to point them out.
Better look next time! And better research too!

Well notwithstanding the above well-made points I feel moved to let you know my first impressions were “wow that’s really, really good”, particularly in terms of constructional & painting skills. I’d only make the (excellent) dry-stone wall a bit more compacted, it looks slightly too coarse & clean but probably a sandy-ish powdery filler into the deeper gaps would nail it. Great scene all the same

Well you know I have to like this subject! LoL Nice work and great start! The basics are all loking very nice so far.
J

Good morning, Sirs!
Well, as we can see there’s still a lot of improvements to be done. As soon as I can make I will post the new pics. Thanks a lot for the nice feedback.
Gelson

Good evening!
After some minor improvements here there are the new pictures. I made the straps of the backpacks, the Sten bandolier, Bren magazines, give some more lights to the badges and added the stripes to the NCO. The empty cartridges are barely visible. 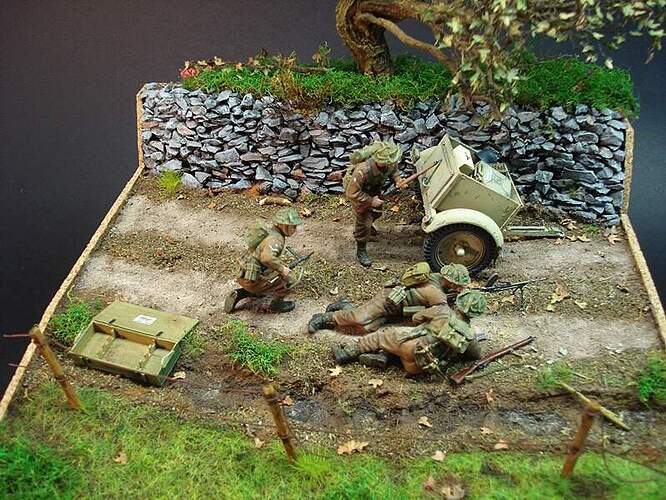 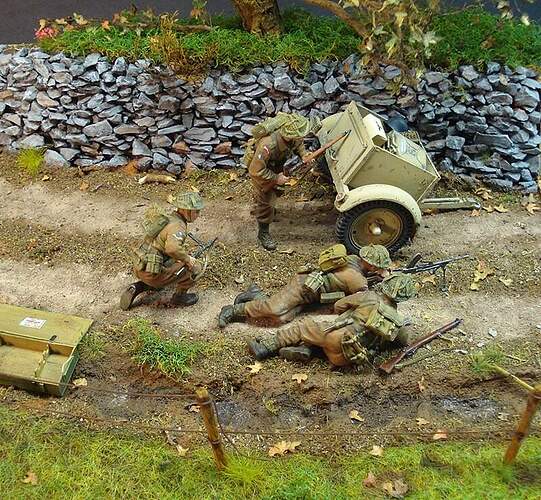 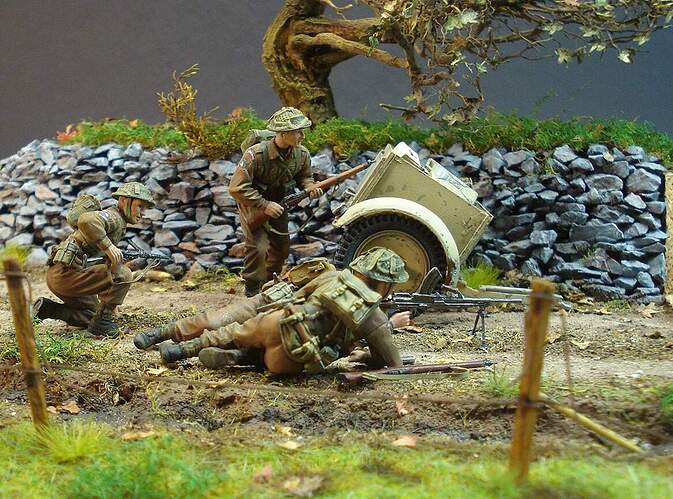 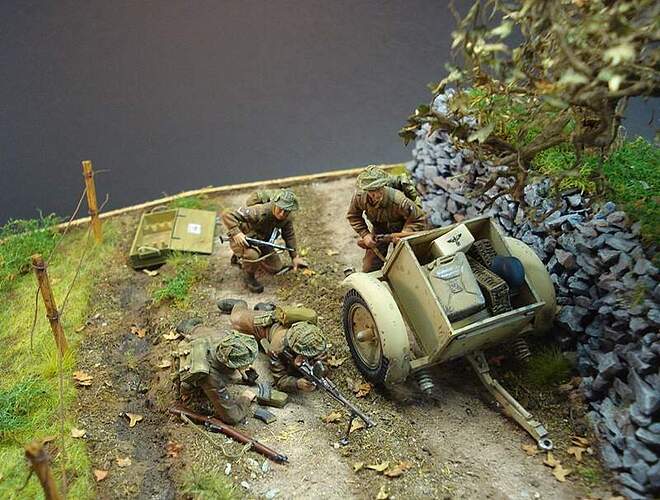 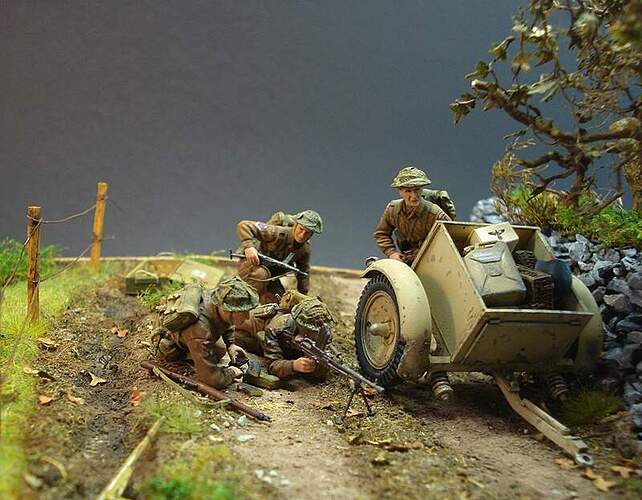 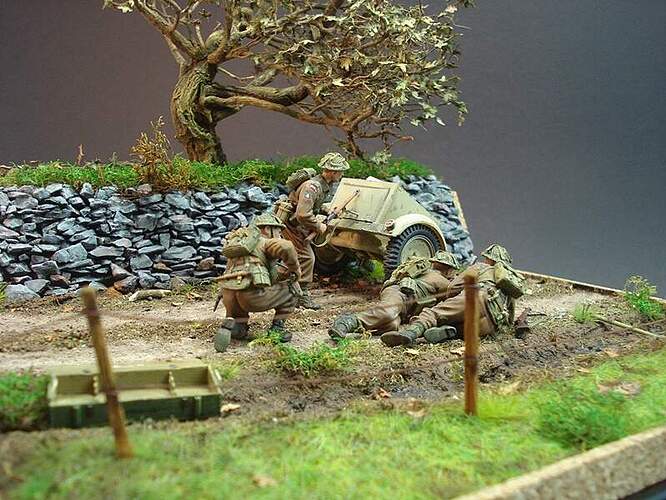 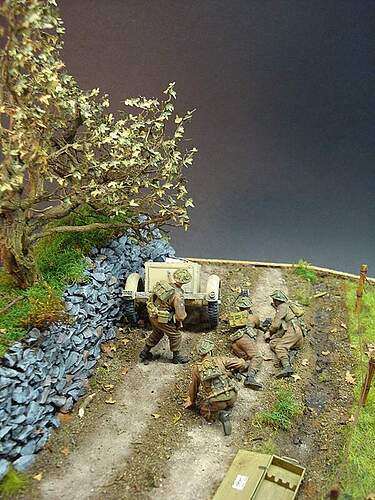 Thanks a lot for the feedback.
Best Regards.

Very , very cool . I like the individual leaf placement on the tree . They appear to be Birch tree seed pod flecks .