I am working on building a collection of the artillery pieces used by the US American Expeditionary Force in the Great War. This is the 75mm Gun Model 1917. The US decided to standardize on the French 75mm ammunition. However, they had lots of problems getting the French 75 into production in the US and even more problems with their own Model 1916 gun. Bethlehem Steel in the US had been building 18 pounders for the British. So, it was decided to modify that design to fire the French 75 ammo and make a few other modifications.

There is no kit or conversion kit for this piece available in any scale. I started with the Resicast 18 pounder with limber in resin. To turn it into a US 75mm, I cut down the barrel and recuperator, modified the breach ring, built all new straight shields, built shield mounts, and added the US sight, tool, and spares boxes to the inside of the shield. 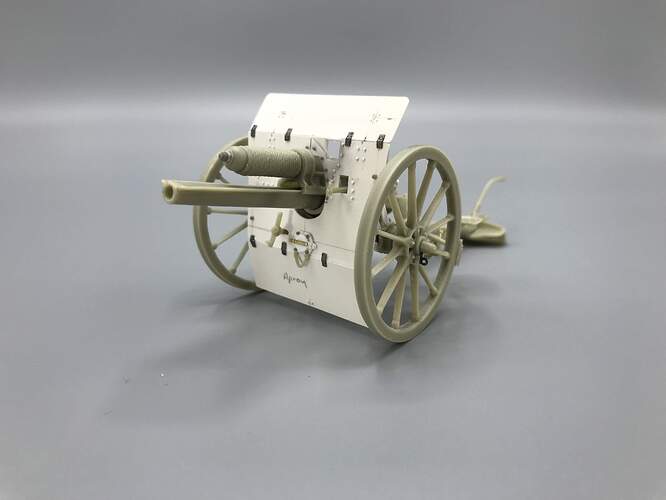 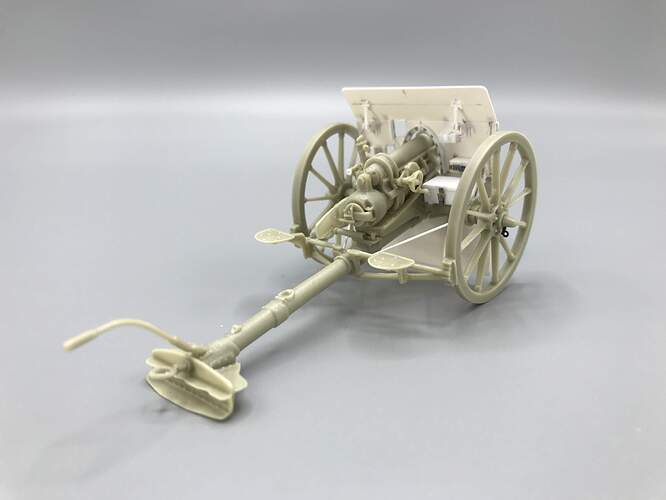 The Resicast British limber was also modified to reduce the profile and accommodate the 75mm ammo, I had to saw off the top row of shells, create the drawers in the center of the ammo box, scratch new ammo box top, lid, and apron, and add all of the US pioneer tools and footman loops. 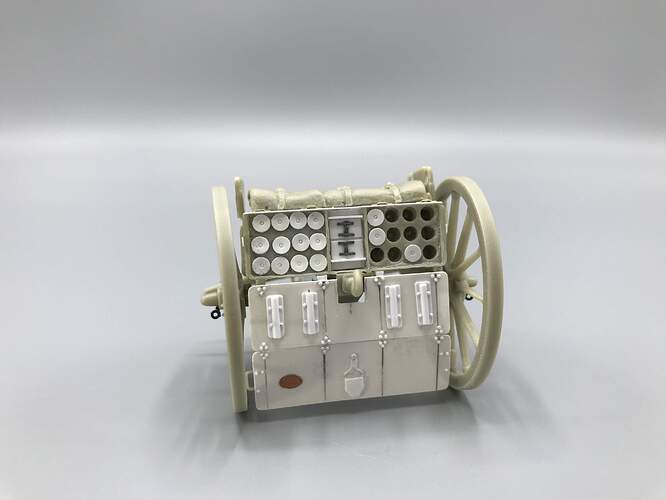 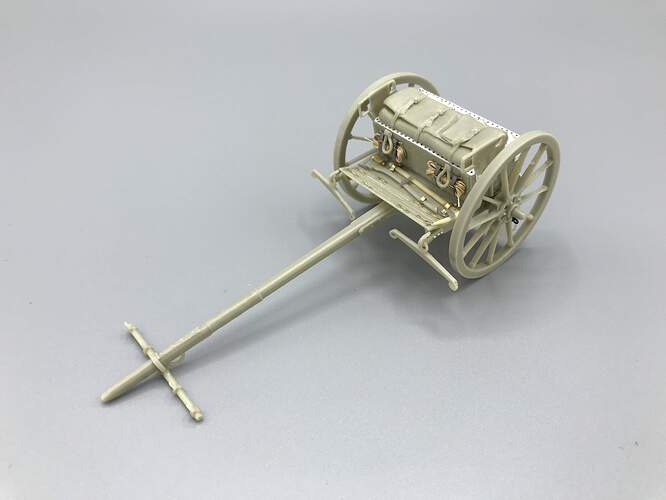 I finished the gun and limber with AK Real Colors, various Tamiya colors, AK weathering products, and Winsor and Newton oils. The artillery regiments that were equipped with this gun were still in training in France when the armistice was signed; so, the weathering is very light as the guns were factory fresh. 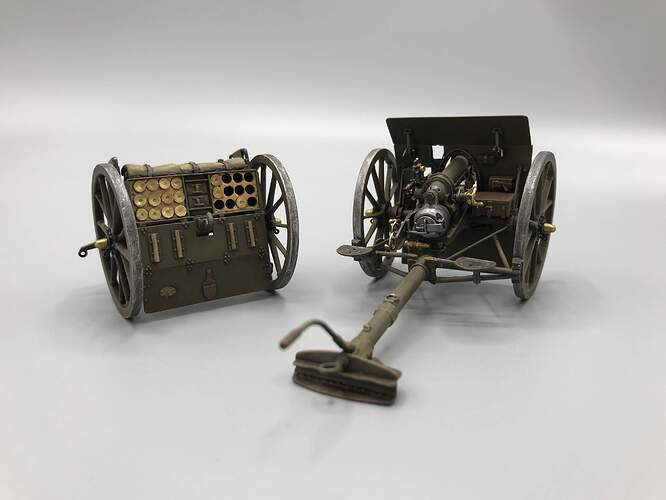 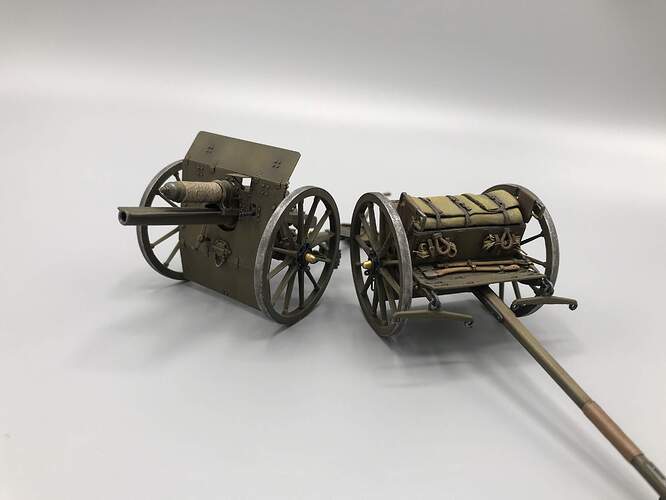 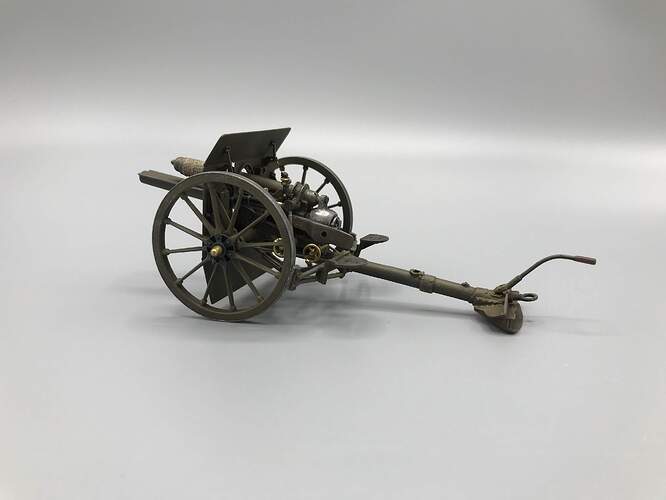 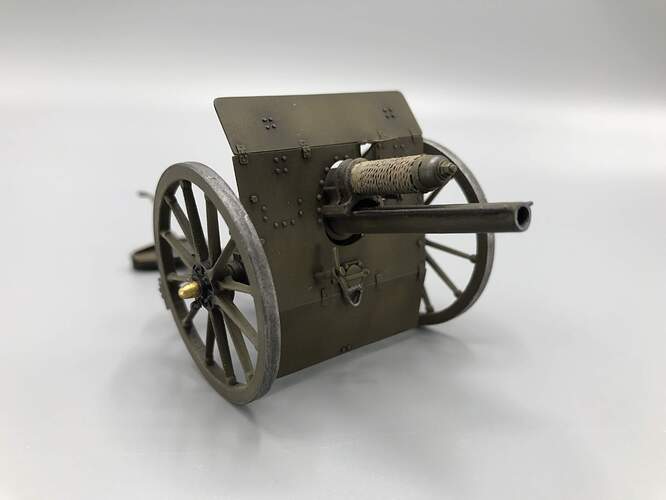 This was a lot of work for a small gun and limber; but, it is a good addition to my collection and may be the only model of this gun in existence.

Very nice scratching, building, painting and subtle weathering. I really like the brass parts on the gun.

Any plans for a 14" Railway gun Mk. I? Only half joking, but that would be a beast. Don’t know if there are any scaled plans available though as I’ve been looking on and off for a while.

Thanks! I’ve not found enough reference material on the 14" to even contemplate that project. The other things on my list are the US 4.7 inch gun which got into action in the Great War and the improvised 6 inch coastal gun on the M1917 field carriage which was ready for action in France. I have line drawings and walkaround photos for both. They would both be total scratch builds. I keep hoping that Vargas Scale Models will tackle those two subjects as they specialize in interesting WW1 artillery.

I stand corrected, Ian Hogg’s book “Rail Gun” has a profile line drawing of the 14" rail gun, but no scale is listed. I had a note in there that it’s likely 3mm scale, which I think I figured by going off of one of the wheels. Still not enough to really go by, even with the high resolution photos I’ve pulled off the National Archives.

The other things on my list are the US 4.7 inch gun which got into action in the Great War and the improvised 6 inch coastal gun on the M1917 field carriage which was ready for action in France

Had to Google both, that 6" coastal gun on the carriage looks cool, looking forward to that one.

I keep hoping that Vargas Scale Models will tackle those two subjects as they specialize in interesting WW1 artillery.

I just heard of this company for the first time the other day. Saw a listing on Scalemates of some weird mobile Italian howitzer that looked real interesting.

On the subject of future releases, I’ve heard Panzer Concepts announced that they’re doing an M1918 railway gun, forget if it’s the 8" or 12" version. Didn’t make it in time to see combat in the First World War though.

I’m working on that weird Italian gun - the Obice 305/17 da Stafano. I am trying to complete the weathering this week. Vargas Scale Models does some really interesting subjects. I have two of their kits in my display case.

The US 4.7 inch gun will be hard to scratch build using traditional techniques just because it is small - all of the measurements and cuts will have to be very precise. The 6 inch coastal gun on carriage M1917 is bigger and therefore the tolerances on the cuts are greater.

I’ll keep an eye on Panzer Concepts for an M1918 railway gun.

The gun is amazing , but the limber is thw real eye candy . Together they are simply beautiful

Thanks Chris. These Great War subjects are a lot of fun. There was so much innovation happening as both sides tried to figure out how to overcome the problem of the trench/machine gun. Although the number of WW1 kits is slowly increasing, you still have to do some scratch building for some subjects. For my American Expeditionary Force artillery collection, I have built everything that is kitted or can be converted. I am down to the US 4.7-inch gun and the US 6-inch coast gun on a field carriage to complete the collection. Both will have to be scratch builds. I need to stock up on modeling fluid (scotch whiskey).

I like to use the same modelling fluid . Except since the accident I cam not partake . Burnhams small batch wheat is my go too.