I am continuing to build out my collection of Great War artillery used by the American Expeditionary Forces.

Being bereft of modern heavy artillery upon its entry into World War I, the US equipped the American Expeditionary Force (AEF) with heavy guns purchased from Great Britain. Among them was the 9.2-Inch Howitzer MkI. As the US Coast Artillery Corps (CAC) had experience with heavy guns and there was little to no threat to the coast, they manned the 9.2 inch batteries. The 65th CAC Regiment went into action in France in September 1918 with the 9.2’s. Other regiments were in France, equipped and in training at the time of the armistice.

For this project, I used the Resicast 9.2 Inch Howitzer in resin - the only choice in 1:35th scale. The kit is well mastered and well molded. The clean up was minimal for a resin kit. There were only a couple of pin holes to fill and no parts required work to correct molding issues. After working on resin kits from other suppliers, this was refreshing. The howitzer itself was built mostly from the box. I added and enhanced some details but no major surgery was called for. The platform was entirely scratch built as the kit one included a molded in base and lacked detail. 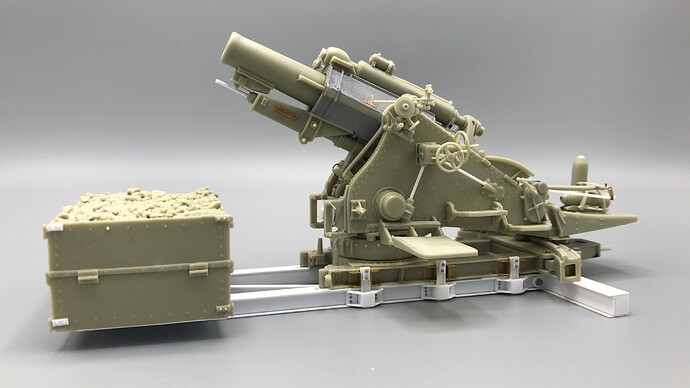 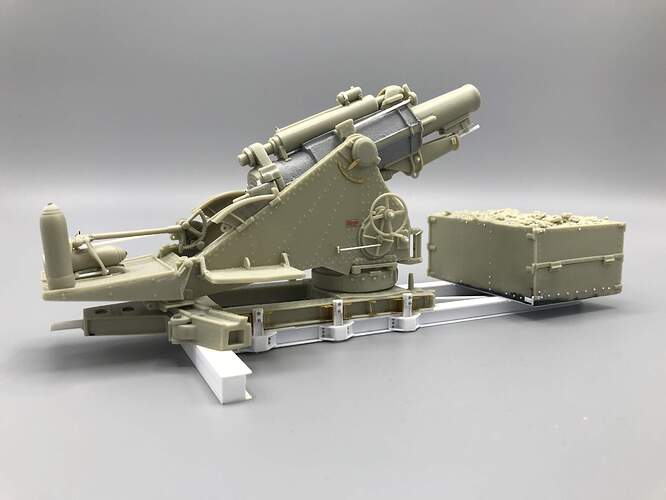 Divining the camo scheme and colors from 100 year old photos is fraught with danger. I couldn’t determine much from the photos of the 65th CAC other than they were in a muted camo scheme. As they were purchased from GB in France, I chose to depict it in a British camo scheme of yellow, green, and brown with a black interline which is consistent with the photos. A modeling friend (thanks Mike!) created custom decals of the 65th’s bear insignia, and for the ammunition.

After priming with Krylon Colormaster rattle can flat back from the hardware store, I airbrushed it with Tamiya paints thinned with Mr Color Leveling Thinner. This is my go-to paint and thinner. It just works with no alchemy required. I started with Tamiya XF-2 White as a pre-sun on the upper parts. I then penciled on the camo pattern and used the silly putty method for masking each color. I used Tamiya XF68 for the green, Tamiya XF60 for the yellow, and AK Real Colors RC031 for the brown. The black interline is Tamiya black done with a 5/0 brush. This required several sessions, a lot of patience, and a fair amount of scotch to recover. I applied a dot filter of Winsor & Newton oils to each color to provide some depth. After sealing with Future, I applied a dark pin wash and used AK weathering products. I finally sealed it all in with Dullcote, and then gave it a dusting of Tamiya JGSDF Brown. I used Vallejo brass for the yellow shiny bits and Uschi Chrome pigments for the steel shiny bits. 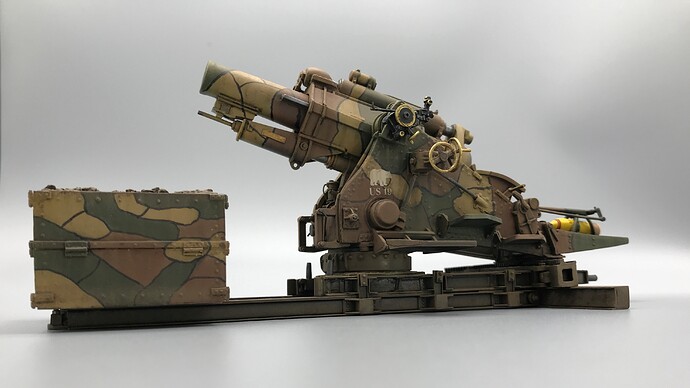 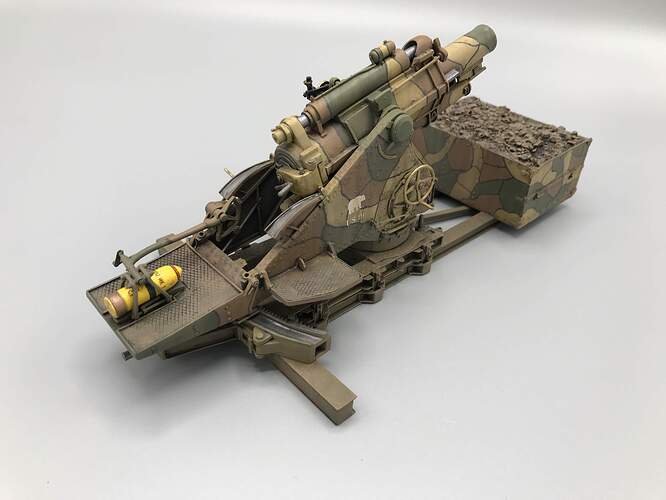 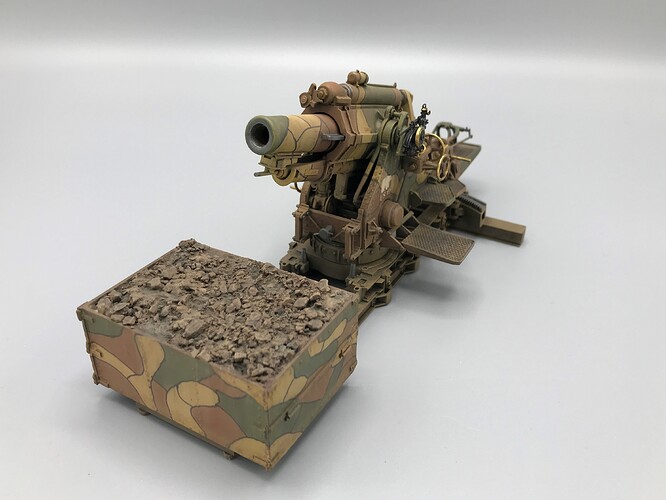 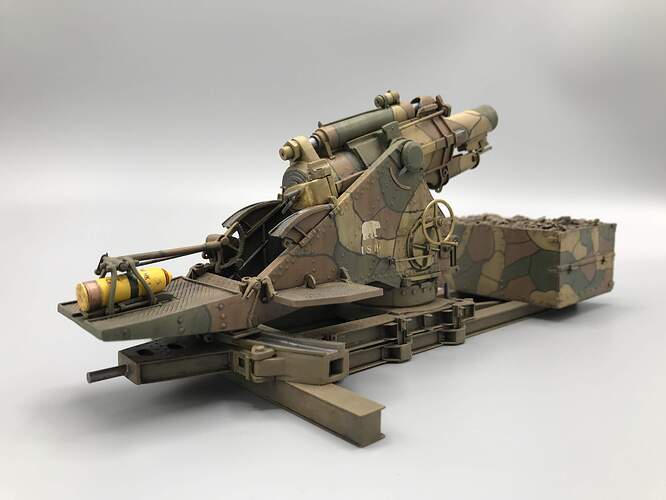 This beast looks pretty nice in the display case along side my other Great War artillery.

Very nice. That looks like one heavy beast. Were these mobile at all or only on fixed sites?

That’s a monster isn’t it!
Fantastic work. Really like the camouflage and weathering.

Excellent job! You’re making me want to get one of these !! Especially with all the nice ww1 figures out there now, one can make a nice little diorama

This is absolutely beautiful. The camouflage and weathering are exquisite.

I think perhaps semi-mobile, in that they COULD be moved, but I seem to remember reading somewhere that it took days to emplace as the gun pit had to be dug out (the earth went into the stabilising bin!), the piece levelled etc. So I think once it was in they tended to stay where they were! Interestingly, I have an old WW2 propoganda book, “Britains Wonderful Fighting Forces”, which features a cutaway of the 9.2" Howitzer in its Army section, which would seem to imply it was still not declared obsolete 20 years later!

In this picture you can notice some pairs of wheels beside the battery. Not sure they’re related to the gun though… 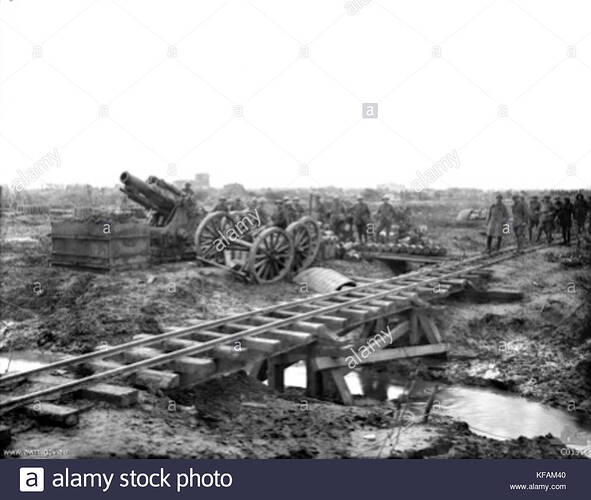 It just occurred to me that before moving it, the crew would have to first dig out the earth in the bin. Just to have the pleasure of refilling it again a couple of miles away!

Thanks guys for all of kind remarks. The guns were mobile. They broke down into multiple loads on custom wagons that were then towed by tractors. The tube went on one wagon, the upper carriage on another, with the platform and knocked down earth box on a third. In the US CAC regiments, these were towed by Holt 75 caterpillar tractors. 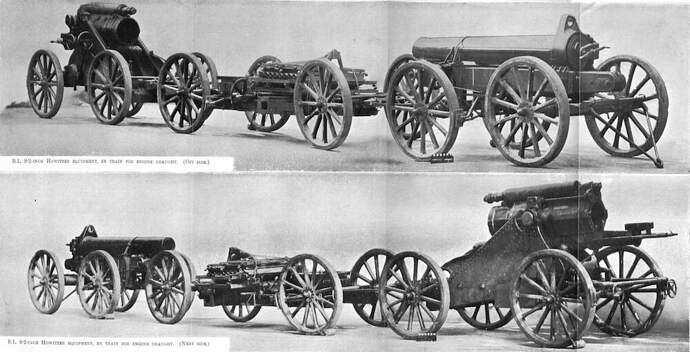 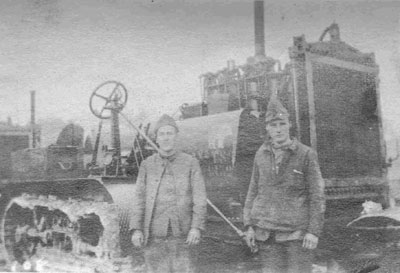 Emplacing them was time consuming as the firing position had to be leveled, the lower holdfast platform dug in and leveled, the gun reassembled, and the earth box filled with 9 tons of dirt.

The crew would be exhausted before they even had to start humping ammo and firing.

For those with cash burning holes in their pockets:

And on this side of the pond…
9.2 Inch Howitzer on Transport Wagons

Pricey, but if you combine it with the Roden Holt 75, it will make a stunning and unique entry in any model contest. Hmm…

Absolutely stunning . The camo and weathering bring it to life

Thanks Chris. The WW1 camo schemes are interesting. The bright colors and interlines are striking. I really want to build something that used the US 5-color camo scheme – I really NEED a cannon with mauve paint!