A train torn to shreds by a boiler explosion

Just happened to see this picture and thought it was interesting. 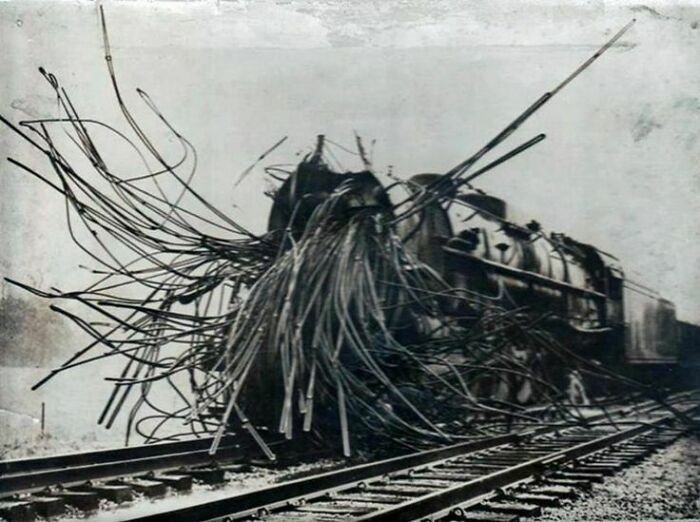 The title is the caption that was with the photograph.

A different kind of boiler explosion – I can’t immediately find the caption but I think it was Oslo & nobody was (seriously?) hurt… 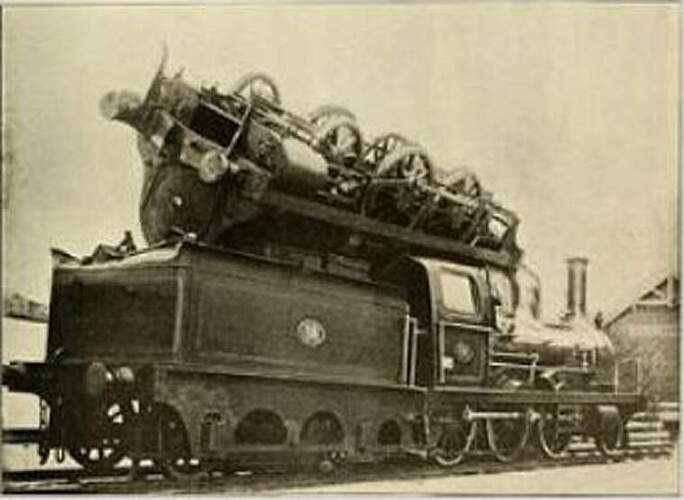 Ok, so lets model one.

Nice find, Randy. Boiler explosions are as fascinating as they are terrifying. Seems like no two are alike. The force of the blast is awe inspiring. For instance, in the great Southern Pacific roundhouse boiler explosion of 1912, a piece weighing 15,000 ponds was hurled a quarter mile. Not far from here and long ago, a Clinchfield RR mallet blew the huge boiler hundreds of feet from the frame.
This one in Norway in 1888 blew the locomotive atop another loco. 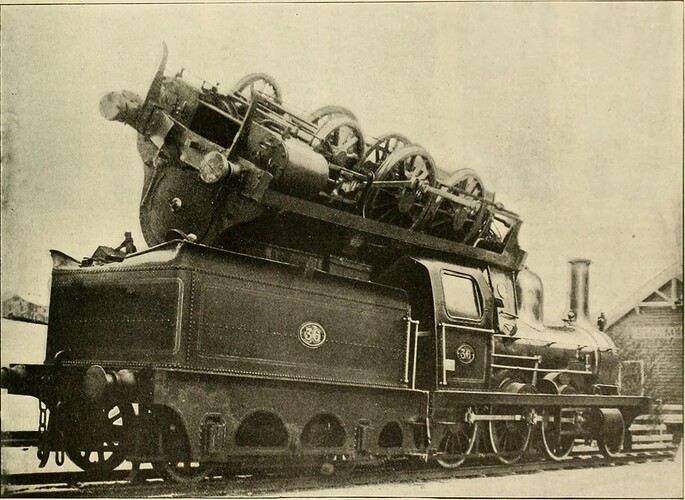 Staged head-on collisions were not unheard of. Check out the crash at Crush.

thought I was having a serious senior moment there i.e. “huh? I don’t remember writing any of that?!”

Thank you Fred. Something I had never seen before. I had no idea that they were capable of having that happen. I have a whole new respect for the engineers that operated them knowing that they were riding something that could explode like that. Had to of been a hardy bunch indeed!!

Here are a few more images. 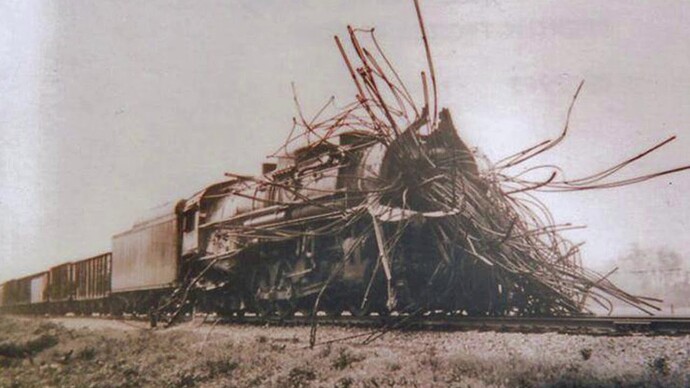 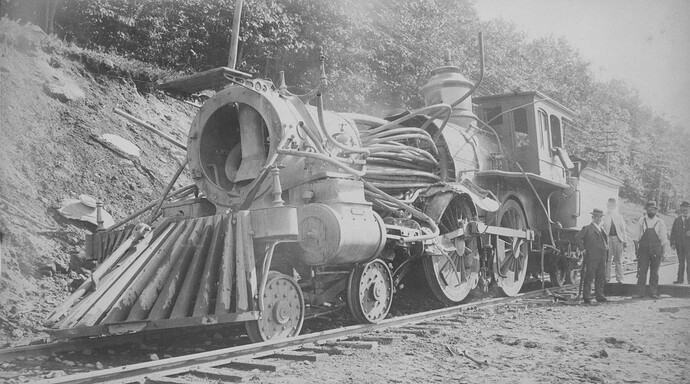 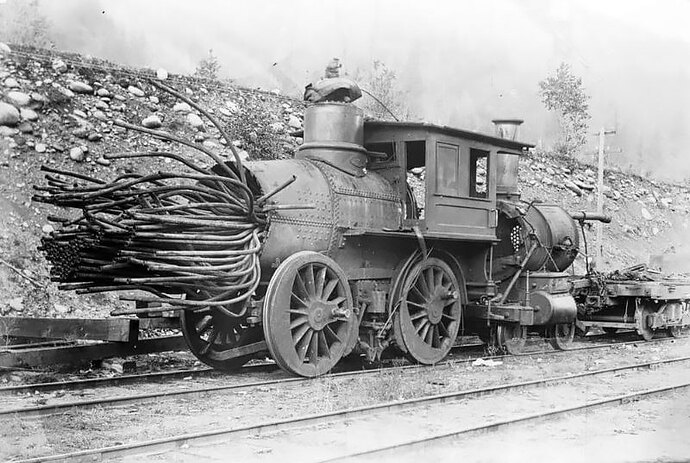 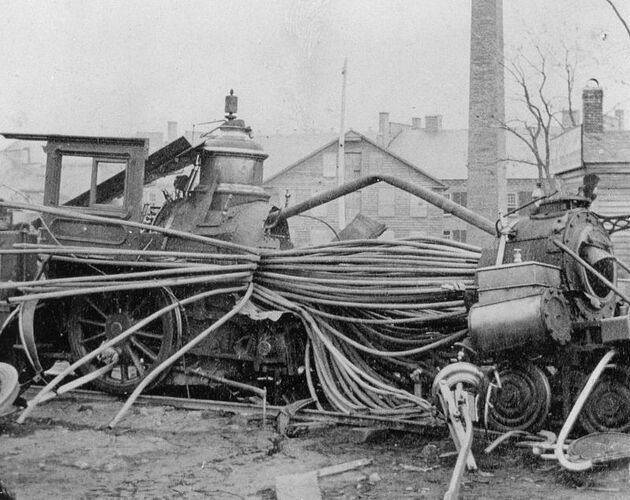 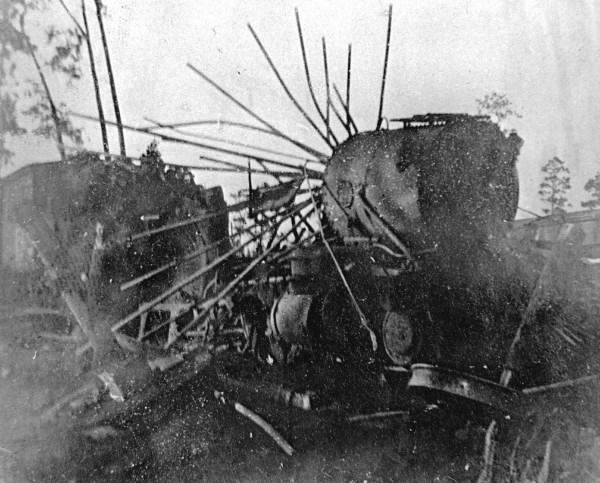 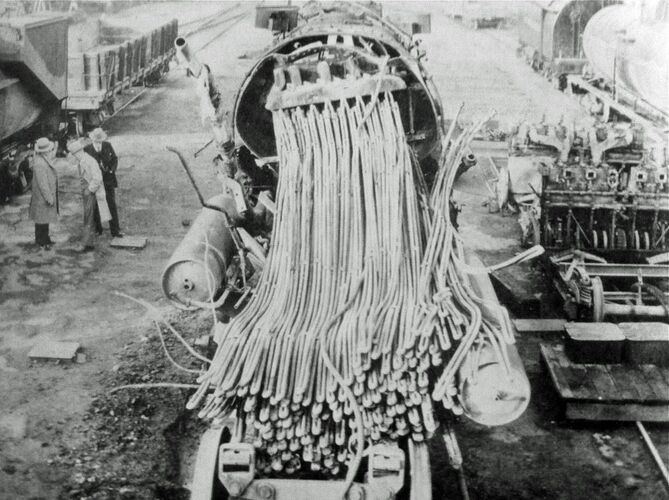 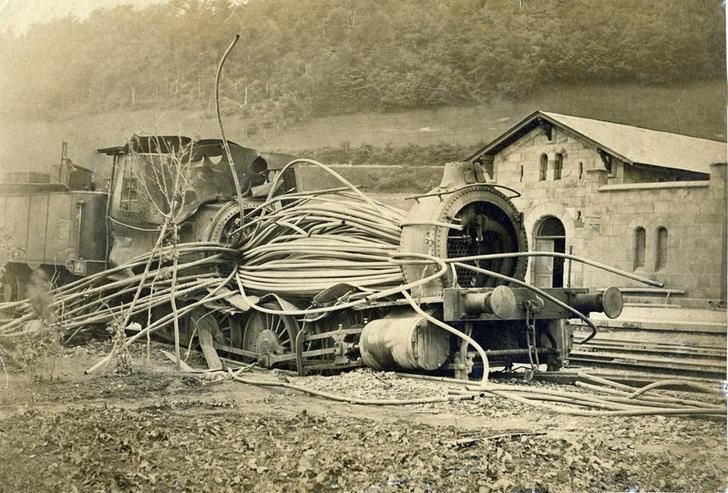 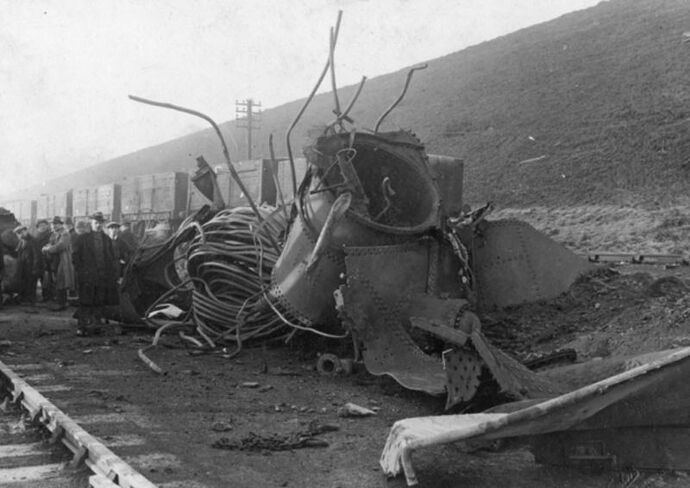 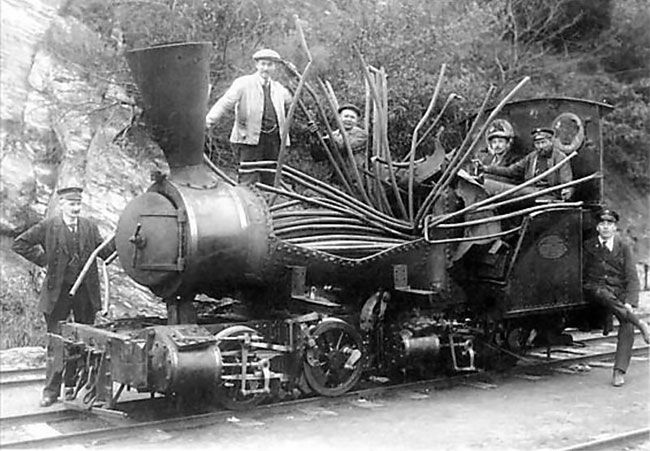 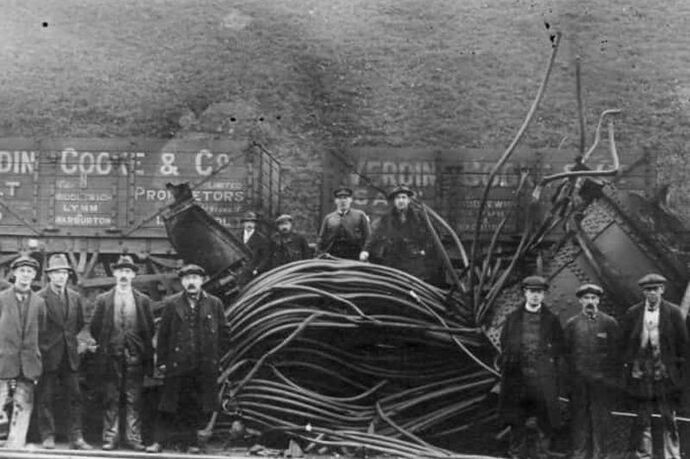 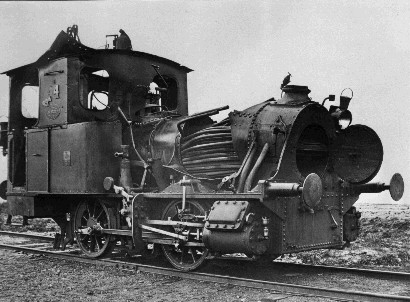 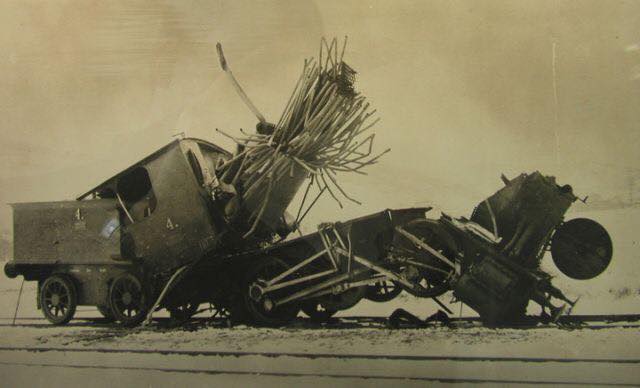 And thank you Randy, awesome images. As Greg’s suggested & you’ve inspired, whenever I return from the far side of planet Anthropoid this has to be on my shortlist for Next Project. - with the right pyro recipe, a Before & After…

Its probably worth mentioning that many early steamboats used locomotive-type firetube boilers resulting in many notable disasters including the loss of the Sultana with over eleven hundred fatalities. 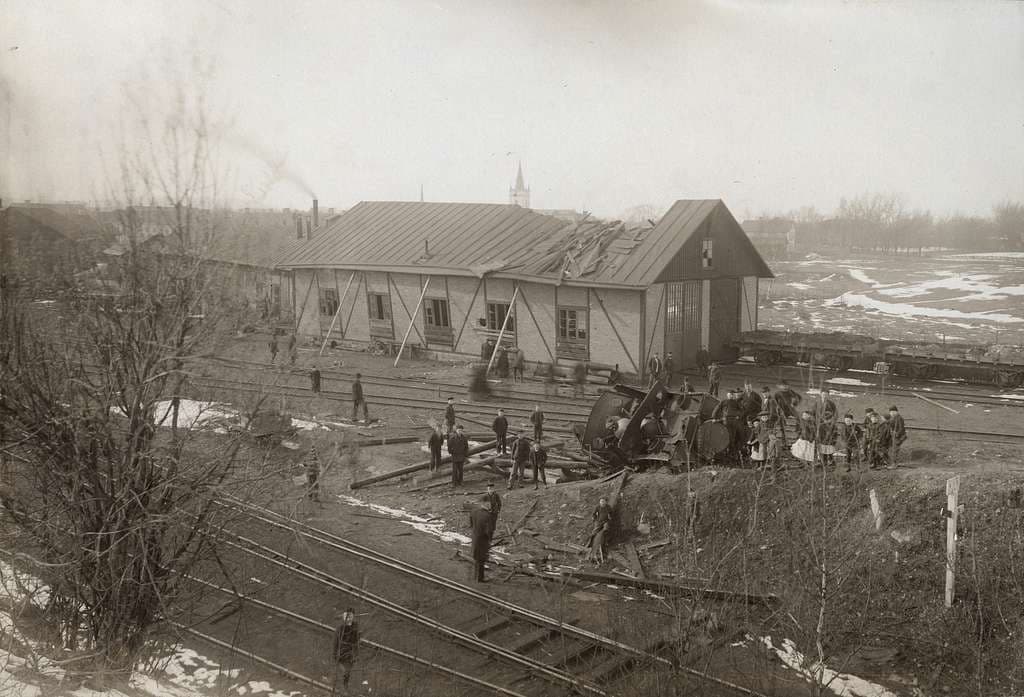 Blew up inside the shed. Engine nr 1, named Hultenheim, owned by Nässjö-Oskarshamns Järnväg
(NOJ was a railroad between two Swedish towns, Name1-Name2 Railroad).

Locomotive No. 1 “HULTENHEIM” built in 1869 at Hatcham Ironworks, London, according to Fairlie’s patent. The locomotive, still with the original boiler, exploded on April 8, 1902 at 11.25 inside the workshop in Eksjö. A steam boiler explosion is very unusual, but in this case the locomotive was newly revised and among other things the safety valves were to be tested. However, an incorrect lead gasket had clogged the manometer line so that a too low pressure was displayed. When the boiler exploded, the locomotive’s upper body was thrown out through the roof and ended up on the railway yard.

Unknown engine, unknown location (at least to me) back in 1850: 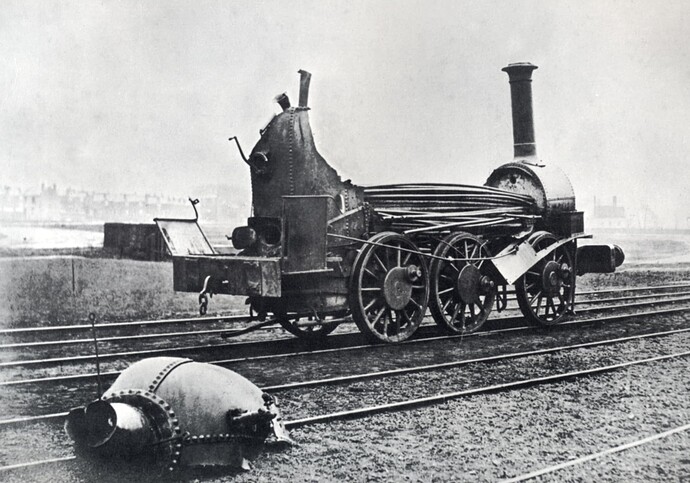 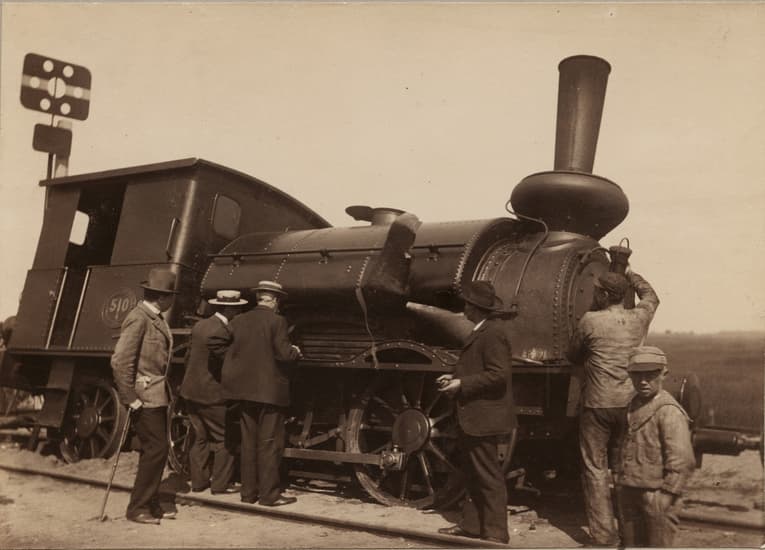 Thank you for sharing everyone. The destructive force from the explosions is just astonishing. Again, I had no idea they were capable of that.

Interesting to see in a few images that the boiler failed at the smoke box . I wonder if they were engineered that way to direct the force away from crew / bystanders. Or is there negative pressure in this area from the forced draft ?

Sometimes there’s not much left… 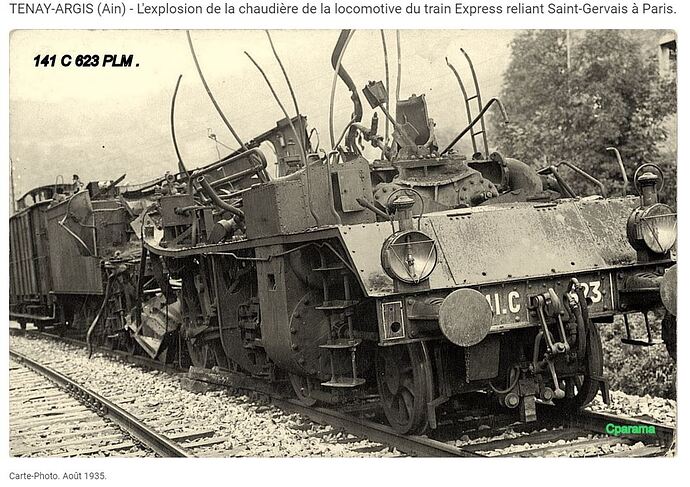 “The Best Friend of Charleston, a steam-powered railroad locomotive which, on June 17, 1831, became the first locomotive in the US to suffer a boiler explosion, seriously injuring the engine’s crew. The explosion is said to have been caused by the fireman tying down the steam pressure release valve.” 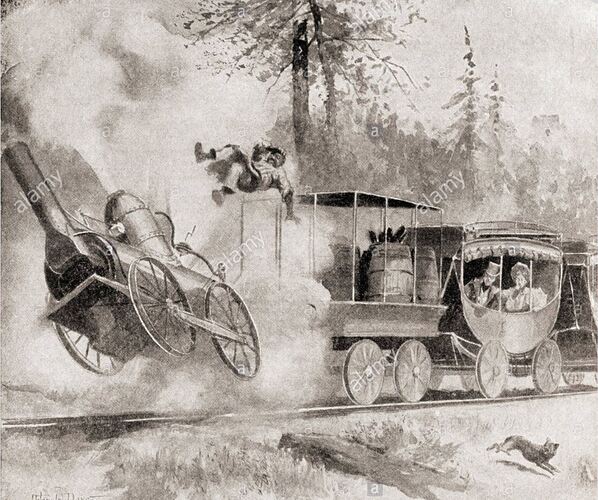 That´s why we have in Germany the Technischer Überwachungs Verein or TÜV. It was originally founded to test steam boilers to prevent such mishaps. Nowadays TÜV is mostly there to harass car owners.

Most of the time the failure starts in the roof of the firebox where the water is thinnest - run a little too low on water and the metal overheats and cracks, or the rivets pop. As soon as there’s a tiny gap to let superheated water out, the entire water content tries to flash over to steam (at about 1300 times the volume of the water) and forces its way out through the newly-formed crack in the firebox. The resultant “explosion” pushes the flue tubes forward and out the smokebox (assuming the walls of the boiler are strong enough to resist just splitting open), while also scalding the poor cab crew. Weaknesses could form in other parts of the boiler leading to failures elsewhere, but the firebox crown is a common location. There are cases where the sudden downward jet of steam escaping the firebox launches the entire boiler to summersault forward like a pinwheel firework.

Video about
The Crush Texas Train Crash of 1896 with excellent picture and a staged train crash. 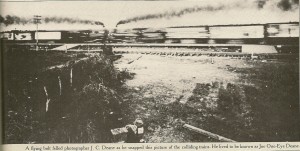 A fire-tube boiler is a type of boiler in which hot gases pass from a fire through one or more tubes running through a sealed container of water. The heat of the gases is transferred through the walls of the tubes by thermal conduction, heating the water and ultimately creating steam. The fire-tube boiler developed as the third of the four major historical types of boilers: low-pressure tank or "haystack" boilers, flued boilers with one or two large flues, fire-tube boilers with many small tubes... A high pressure watertube boiler (also spelled water-tube and water tube) is a type of boiler in which water circulates in tubes heated externally by the fire. Fuel is burned inside the furnace, creating hot gas which boils water in the steam-generating tubes. In smaller boilers, additional generating tubes are separate in the furnace, while larger utility boilers rely on the water-filled tubes that make up the walls of the furnace to generate steam. The heated water/steam mixture then rises int...

The water tube boiler is safer.
The fire tube boiler usually has a steam dome to collect the generated steam so the normal mode of operation is to have steam in or near the top of the boiler