After seeing another post earlier today of some fine looking airplane builds and suffering total burn-out on armor kits I got bitten by the bug to build a WWII plane, gotta confess a Zero wasn’t what I was craving but anticipating a long weekend and just wanting to throw some cash in the LHS’s till this is what I walked out with . . . 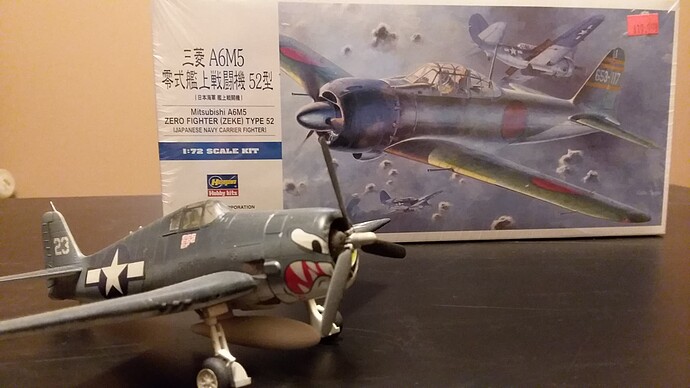 No, the Hellcat is from 10 or 12 years ago, but, looking at the sprue of the Mitsu zero compared to the F6F (my all time fav) I was a little astonished how confounded small the hero zero is . . 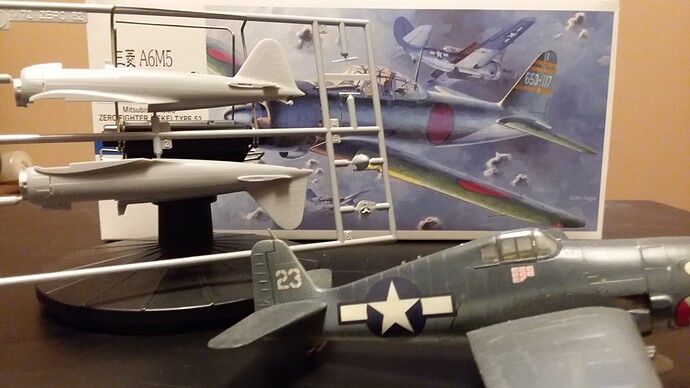 Well, this oughta be fairly easy to get glued up and painted, slip the Tora Tora Tora dvd in and turn into the wind.

Hey all, I’m going to be candid for a minute and admit I was trying to be clever with the title of this post mostly because there’s already two other builds of the Nippon Zero in progress and didn’t want to distract from those builds, no chance of that because it turns out I might be the real meatball here, I say that because I arrogantly beleived I know something about WWII combat aircraft, I mean seriously I’ve been building models and studying history since, well way back.
This wasn’t meant to be a detailed or over involved kit build and we’re still on task with that, in fact so far it’s been therapuetic just putting a model together without it being a commitment to a larger project, somthing I needed to revive the “fun factor” in modeling . . . and what a treat it’s been.
I have always been enamored with Pacific theater fighter planes and attack aircraft but never gave “Axis power” equipment a second thought, but since starting this nifty little kit and doing the requisite research I’m really getting back to my roots and learning some “new” history . . . as I mentioned before I was taken aback by the petite size of this plane, having seen actual TBM Avengers (huge), F4U Corsairs (loud as heck and it just looks powerful) and Mustangs (sleek and beautiful) I’d never seen a Zero next to any of these beasts so it was a shocker for sure, sorta like a Mazda Miata next to a '73 Monte Carlo . . . as far as the model let me say Hasegawa has done an excellent job on this little jewel, the fit is near perfect although my plane seems to have some kind of weird twist down the fuselage, it’s only noticeable if veiwed down the centerline, the tail plane doesn’t match the wings dihedral, hmm . . . also I confess my ignorance to the different series, I just thought a Zero was a Zero, not so, infact how do you get Zero out of A6#M?, the answer is typically Asian, I recommend looking it up.
So I apologize to all you hard core A/C afficianados, I’m a bit late to the party, I’ve had my nose buried in 'Nam armor for the last three decades and still come off as a novice compared to some of my fellow patrons of the arts.
Yes this tiny little import sports car of airwar fame has been a fascinating journey of discovery, for example the term “Aotake” blue, I’m amused if not intrigued by the controversy of this one feature of WWII Japanese airplanes, similar in use to yellow zinc on various sections or assemblys, replicating it’s color in scale has proven to be a challenge to the modeler and paint makers as well, there’s a great deal of debate on the www about it’s definative appearence, again I encourage anyone who isn’t already aware to look into it, I know I’ve learned a thing or two.
So anyway on to the build . . . 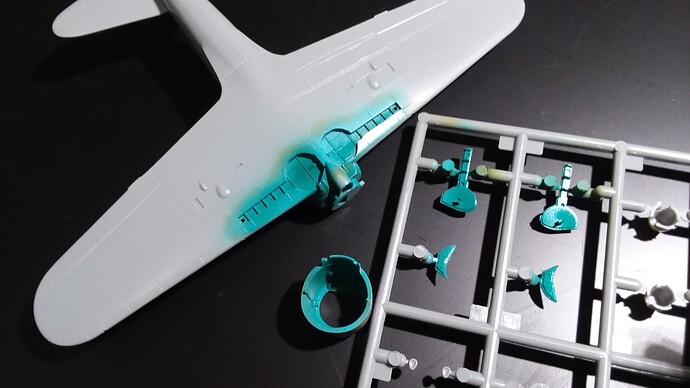 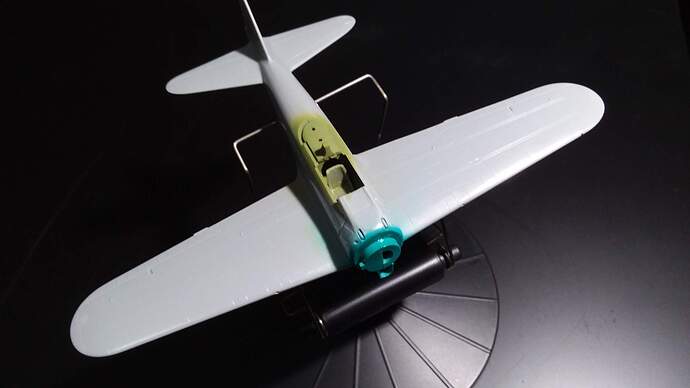 . . . my approach was applying AK’s (lacquer) Russian Interior turqouise and then over spraying with Alclad’s Armored Glass clear green to get a semblance of Aotake blue.
Next up is chooseing the finish color of the plane, I’ll probably PO some of the accuracy purists but the animal in me insists on being different, uuugghh, that obstinate defiance has caused me great difficulty in life I’m affraid.
That’s all for now, the day is young the year is waning and there’s much to do about nothing . . . get out of your comfort zone and try something different and breath some new life into your hobby, cheers dudes!

Looking good so far. Sometimes it’s great to just do a quick, easy build for fun

I’ll be watching this! Gotta love the Zero in all of its forms. And yes, doing research on Japanese aircraft in general and the Zero-sen in particular is an eye opening experience. As Yoda said, you must unlearn, what you have learned.

Back with the latest progress . . . Hasegawa’s tiny little Zero-Sen is an easy kit to put together, I spent more time correcting minor painting issues than actually glueing up the assemblies. I regret not posting a few pics of the model with fresh paint and markings, in fact the decals was the only area thus far that caused any problems aside from the spindley wheel struts and this was my fault, trying to use setting solution on top of the Future finish isn’t neccesary but I worked it out . . .
So I’ve always wanted to build a Nip fighter with a totally worn and fatigued finish . . . 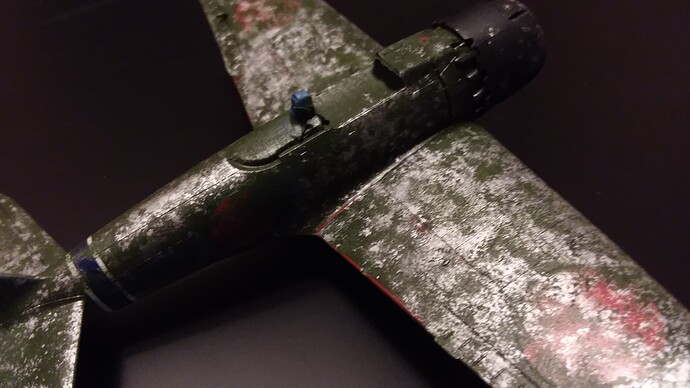 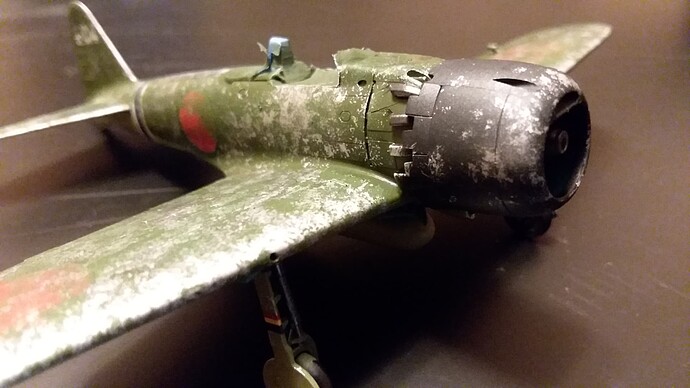 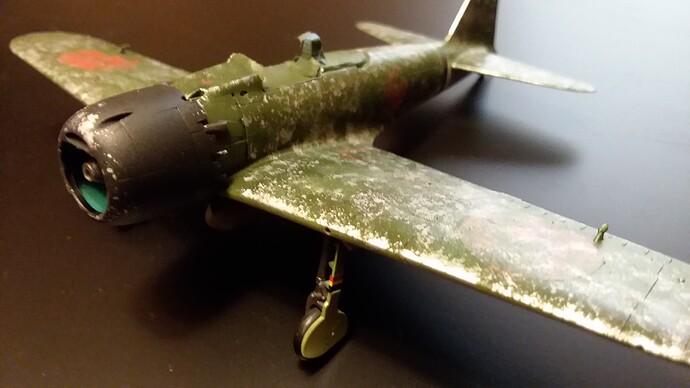 . . . not an award winning presentation and something just looks off about it, took me minute to accept that I’ll have to mask some of the panel lines to get a more realistic finish, at least I hope that’s the remedy. A question though . . are the flaps, ailerons and rudder doped fabric? If so I’ll have to fix that.
In the meantime I finally gave in and ordered a SB2C Helldiver and a TBF Avenger also, I’ve been lusting for the Helldiver for months now, don’t know what draws me to this plane, it was a dog of an airframe by all accounts but something about it’s lines appeal to me, the order was scheduled to deliver today but an ice storm has been looming in the forecast all week so I wasn’t expecting to see the kits until next few days from now, took a look at the tracking this morning while watching the snow build up and low and behold it delivered yesterday and was sittin’ on the front porch, cool . . . well got to fix up this Mitsu so I can get some tri-colored planes on the flight deck.

Well after working on this little beast some more I just couldn’t get the effect I was looking for . . . time to take it back to formula as the man said. 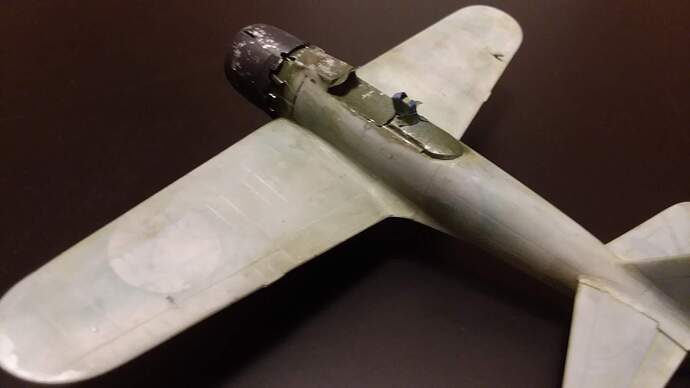 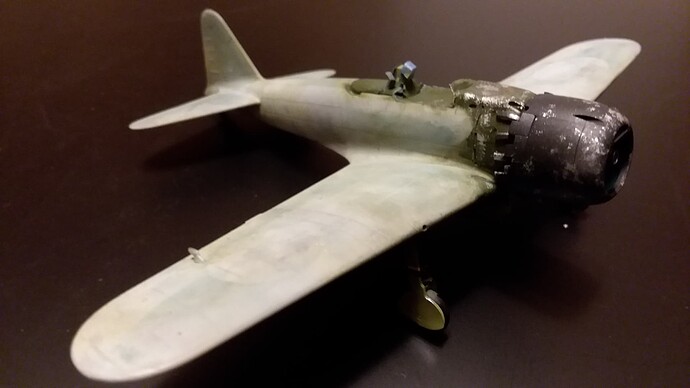 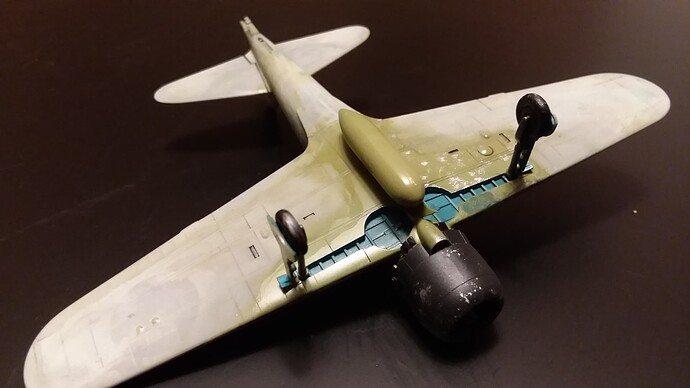 As my dad would say “you need to take that cat and lick it again”, stay tuned chaps, let’s see how this turns out

If anybody could make a sow’s ear out of a silk purse . . .
What was meant to be a weekend quickie turned into a debacle, useing lacquer thinner to clean the paint worked quite well, but, it wreaked havoc on the plastic and even attacked the glue joint on the stabilizer . . IP alchohol works just as well I found out, okay lesson learned.
After spending some time trying to sand out the surface scale left by the thinner I sort of lost enthusiasm for the model so it was a good time to let it simmer.
A snow storm and a mild case of Covid later I got motivated to see if I can redeem myself and get this dastardly little buzz kill completed . . .
If you’re an airplane guy these pictures might make you vomit but I gave it my best shot . . . 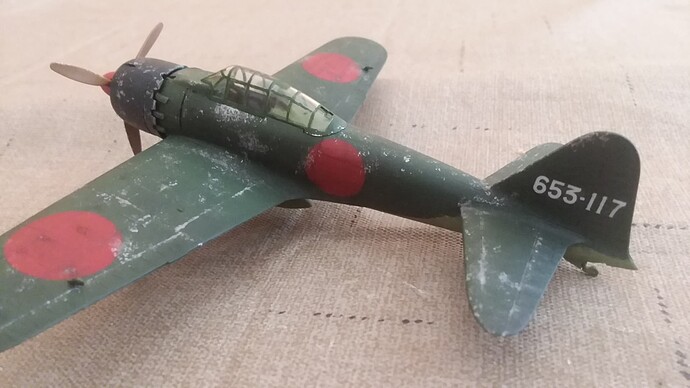 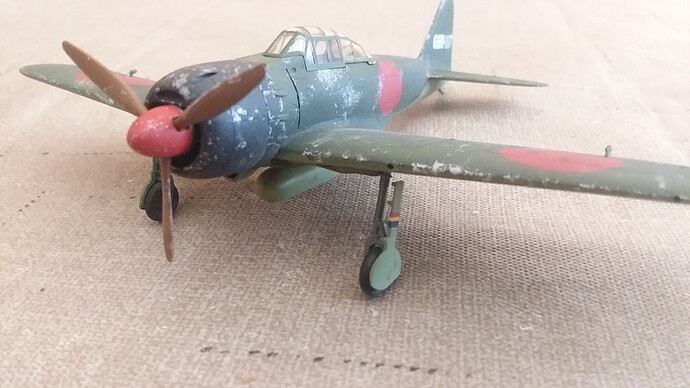 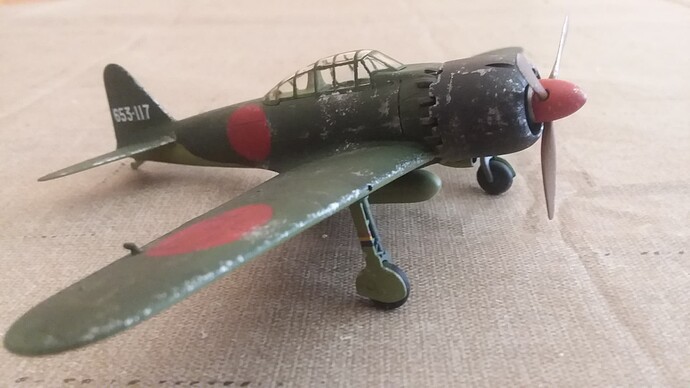 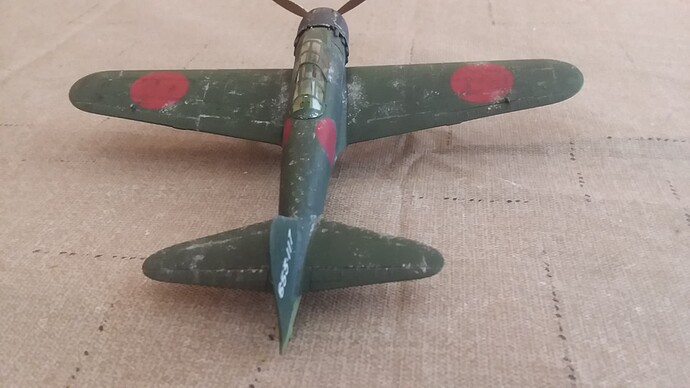 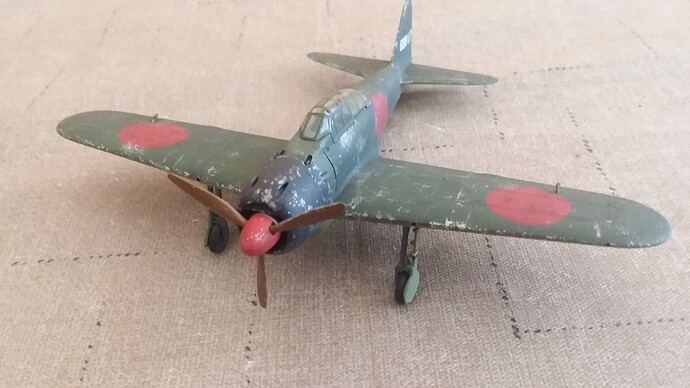 There’s still some detail work to do, gun barrels, antennas, wheel flaps and paint the exhausts but at least the recovery is good enough to warrant finishing the build. Every model is a learning experience for me and 72nd scale is a new frontier for my skill set, when I saw how bad the surface texture was corrupted by the lacquer thinner I came close to 86ing the Zero but I kept going with it, masking is a big part of A/C models, I didn’t do such a fabulous job painting the red insignias but I like the sprayed on appearance. Weathering or chipping a plane is a developed skill especially at this scale and I’m not claiming any talent for it so hopefully the TBF will prove a little easier . . we’ll see.

Cajun, this looks fantastic, and is a great recovery from the laquer attack… In fact, she looks like she’s had a hard life with a few heavy carrier landings, so definitely worth continuing with and displaying proudly!!!

Thanks for commenting Russelle, this was a fun build for the most part that evolved into an expierment of sorts, she’s definitely showing the abuse of a long hard engagement. I’m more inclined now to build a few other IJN/IJA fighters.