Hey All,
Does anyone know which M1 tanks would have used ‘old’ versus ‘active’ spare road wheels. This terminology is what the relatively new T-Rex Studio uses in its 3D printed spare road wheel sets. They are VERY pricey, but fabulously detailed. In any event, I’ve purchased both of the sets, and it looks like the main difference between these two are on the back face of the wheel. The ‘old’ version has what I would call a smooth circular ring (reinforcing ring?) on the back of the wheel, whereas what they call the ‘active version’ has, in the same location, what looks to be more of a ‘scalloped’ ring, kind of like the difference between the front faces of the different drive sprockets for an Abrams tank. Does anyone know which versions of the M1 tank these spares would have been, or are, used on? I am guessing that the ‘smooth’ or ‘old’ version would be appropriate for, say, the Rye Field 1991 Abrams tank. Perhaps this is the only Abrams tank model that this spare wheel would be appropriate for? When did the ‘active’ version of the spare wheels come into use? I can post some photos to help if this question doesn’t make sense. Thanks in advance.

I never saw a scalloped ring, I think it may be a post 2000 thing.
Ken

These are steel wear rings to bear against the center guides as the road wheels themselves are aluminum forgings.

Here are some of the kit wheels 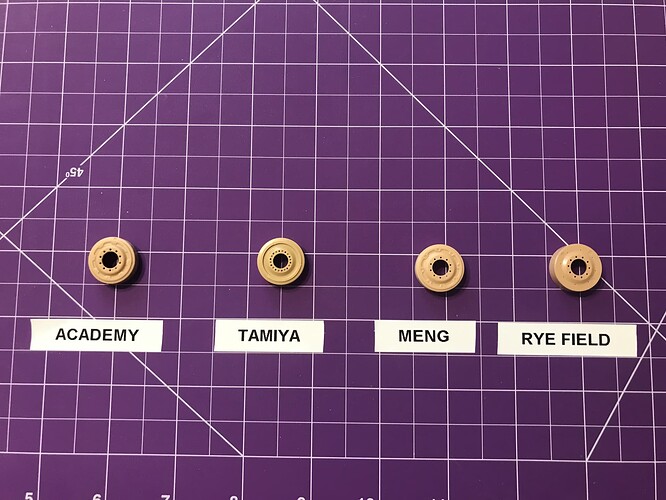 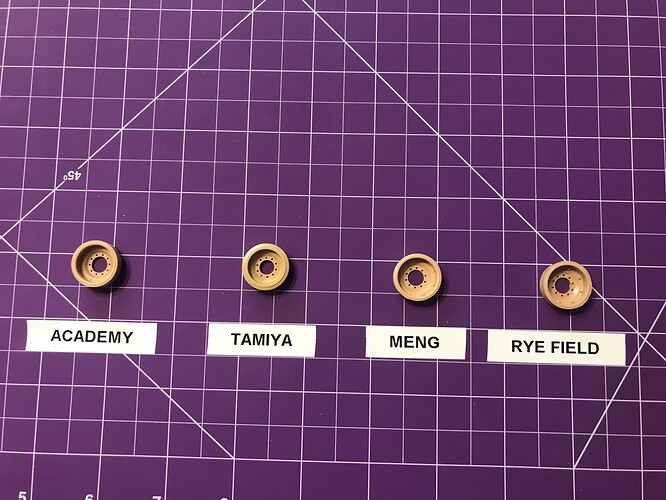 Thanks for the photo post, wanamaker. The back of the ‘old’ spare wheel set from T-Rex looks mostly like the Rye Field wheel in the top image. The back of the ‘active’ spare wheel set looks like the back side of the Meng wheel (and the Academy wheel, also), both also in the first image. So, for sure, I will use the 'active ’ spares when I build the Meng USMC M1A1 AIM tank to duplicate the heavily weathered USMC tank i’ve been planning on for some time. And, as I mentioned in my first post, I’m guessing that the only Abrams where the ‘plain’ ring on the back of the spare wheels is appropriate would be for the RFM 1991 M1A1 kit, which I have. I know I’ve mentioned in at least one other thread, that I am thrilled to have found a set of movable/articulating ‘chevron’ tracks for the 1991 tank, made by T-Rex Studios. Extremely expensive, but VERY detailed and they will look great when done!!

No problem I don’t know if that helps. I have tamiya, rye-field, Meng and academy kits if you need anything else. I do not have the panda or the VOIIO kit. I’m told the VOIIO kit has a Textured hull and panda is out of business.