Hey Guys,
Currently I’m working on a Panzer III J from Academy (13531) and have 2 questions.

1st,
Do I really need to implement the cuts on parts B2 and B3? 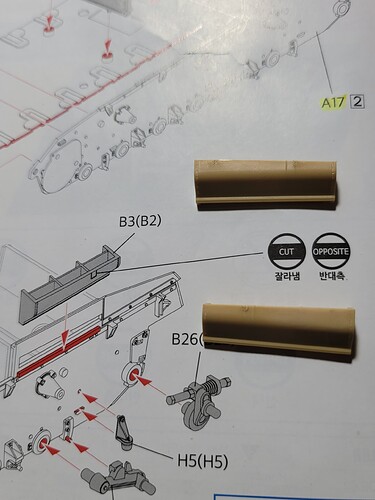 2nd
I bought a panzer III tool clamp set MJ Miniatures [mjez35010] from ebay. Are they the correct tool clamps for the panzer III J I’m working on? The Year would be 1942 North Afrika.

Unless I’m totally missing something here, I see no reason for the cuts on the air intakes. I’ve looked at photos, I’ve looked at drawings, I don’t know what they are talking about here. I did see one photo, the ex-Aberdeen vehicle, that had a tool clamp at this location on the right hand side, but I don’t think that this is a standard tool location, possibly a field mod.

The tool clamps are fine for this vehicle, but they sure look fragile!

I wonder if they mean to sand off that raised square rather than cut it?
Might be silly, but sometimes things get lost in translation.

How is the kit? Been thinking of getting one myself.

I was wondering why there was a square area to be seen on the part. Sanding this off makes much more sense than cutting. My guess is that the reference vehicle they used to produce the model may have had a welding seam in this spot from a missing tool clamp, like the ex-Aberdeen one, and they realized the error only after the model was in production. That and lost in translation as Phantom Phanatic has noted.

It’s possible it could be a moulded on location point for a tool. Crowbar or cleaning rod or something. I’ve seen similar things in other kits. The square just indicates where to apply adhesive for the bracket.

You’re probably correct that it is a location marker, I didn’t think of that. If the same parts are used on a later Ausfuhrung model, it could be an attachment point for a schurtzen bracket.

I think that’s probably the most likely. I’ve only ever done one Panzer with Schurtzen, the Tamiya Pz IV, and I seem to remember a location point in the same place.

Much appreciate all your info gents!! I’ll just sand it smooth and go from there.

So far the Kit is going has planed and very well detailed! You have a choice between L/42 or L/60 and 5 different versions to choice from.

Yes they do!! Once I installed the clamps, ill let you know how it went.

Happy to help.
Kit sounds good, I’ll keep my eyes open in my LHS and hopefully they’ll get one in.