ACADEMY will release a Leopard 2A4 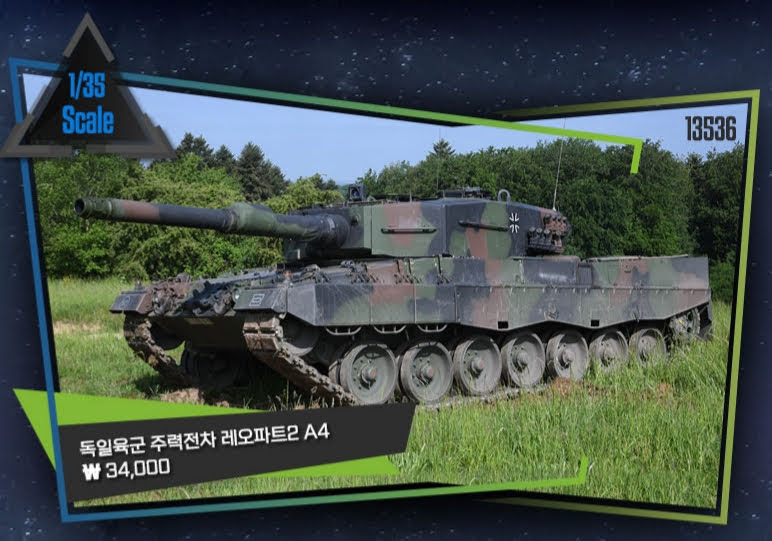 Learned from various sources that ACADEMY will release a Leopard 2A4. For me it is good news. Cannot wait to see how it compares to MENG which is presently state of the art. I hope that ACADEMY will take the chance and make an early Leopard 2 (as it was introduced 40 years ago).

It could easily be a collaboration with Revel, so it could just be a rebox of kit 3193

They say it is a new tool. Assume they will just go for the mainstream and make exactly the same variant like MENG. The REVELL 3193 is not bad at all, but has a strange mixture of the anti-slip-patches. On the frontal hull they show the old style (big patches), but on the rear hull deck they show the later style with separate small patches (like HOBBYBOSS and MENG). The only “early” hull comes with the ancient ITALERI kit number 243.

I hope you are right and it is indeed a new tooling kit. We could use for another offering except the Meng kit.

My assumption is based that Academy also announced some wingy thingy offerings that will be Revell kit reboxes, like the F-4E in 1/32 scale.

Yes, the only early Leo 2 kits are the Italeri and Esci kits released in the late 1980’s (the Italeri kit also appeared in a Revell Germany box). Both depict the Leopard 2A3. The A3 series were early Leo 2’s rebuilt with relocated fuel filler caps, and a thermal sight replacing the low light TV camera.

Esci’s molds were bought up by Italeri, but they never reissued the Esci version, which had link and length styrene tracks, and a separate lift and swing driver’s hatch part (though the hull was solid under it–you’d need to carve a hole if you wanted to show it open). Italeri molded it closed. Esci also separated the little rectangular insert for the hull side that Italeri molded as part of the side skirt.

Hopefully this thread is full of Leopard 2 guru’s … What current mark is the largest being used in the German army ?
I didn’t get much joy trying to Google it, all the info was about hazy ?? Thanks for any help … John

I recently built the Revell 2A5 version in Polish service and have Border Models A5/A6 kit and Meng’s A4 and A7 kits in my stash. To my eyes, the Border Models kit looks the most amazing detail-wise, better than the Revell or even the Tamiya kits.

For a long time the Tamiya 2A5 and 2A6 were the best to buy. Meanwhile they are overtaken by the later Meng and Border Model kits. Anyhow, they are still fine and easy to build. The Tamiya kits still have this “shake and bake” style. You can finish base model in a day. Was hoping long time that Tamiya releases a decent 2A4…

Is MENG Leopard 2A4 the best choice to build Turkish from Syria?

At present the MENG 2A4 is state of the art and maybe the best to make the Turkish version - but still needs some smaller updates. There is the Italeri kit with Turkish decals. Somewhere I read that the Turkish insignia on that kit is not correct. Also the Italeri kit needs the Turkish amendments.
Check out the web, there are some built Turkish Leopards.

Steven, Hi and thanks for the info on the A5/6 ---- do you think the Tamiya A6 will be ok for a first Lepoard OOB build ?

I cannot judge if the Meng offering is the best for Turkish Army 2A4 by specific details or configuration but definitely the best model on the market taken in account engineering, detail-wise and precision to real vehicle. If I was you, I would definitely use the Meng kit and upgrade / detail to meet the ones in Turkish service if needed.
Interestingly the Italeri kit #6559 has Turkish decals:

The Tamiya 2A5 or 2A6 will be perfect for first OOB build. You should take the 2A6, it has two crew figures and still contains the 2A5 parts.

And this is the GOOGLE result for Leopard 2A4 Turkey: 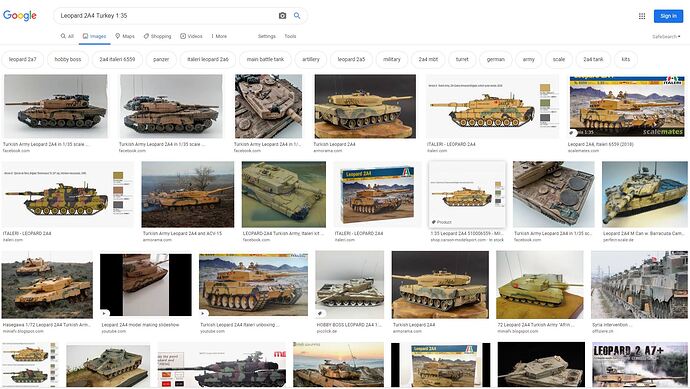 Yes, I know there is a lot of pictures of Turkey Leopard on google and Italeri box 6559.
I think by the look of parts it is an old Italeri with new decals.
Someone mentioned that it is A3 version.

Gerald, I have a hankering to produce a model of one of the early Leopard 2s with the PZB 200, different positioned tow ropes and whatever else I can identify - including wind sensor; I was unaware of the different fuel-filler caps; could you possibly provide any further pointers please - when you have a moment of course?

Hi, checked my files and used the “Leopard Bible” of Mr. Spielberger.
Up to the 3rd batch (in Germann called “Baulos”) the Leopards had the old-style anti-slip-patches with bigger patches. They were pained in plain olive. From 4th batch on the Leopards have the three-tone camo painted ex works. I could not found when the fuel cap in the front left side of the engine cover was deleted. It must already be with the 2nd batch. The ITALERI is therefore somehow a hybrid…
I made some photos to compare the MENG (3-tone) with the ITALERI. There is a small difference in size. You can see the different style anti-slip-patches. All later Leopards have the later style, but I found photos of Leopard 2A4 CAN (the early types) which still have the old style patterns. So it depends on what is visible on the photos of the original tank you want to build which kit you chose 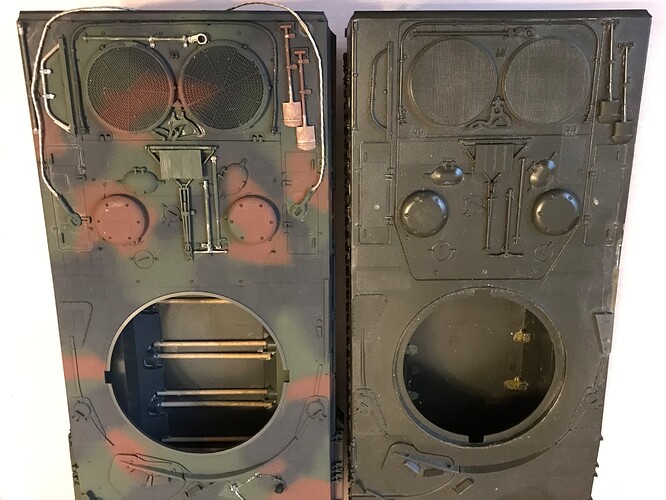 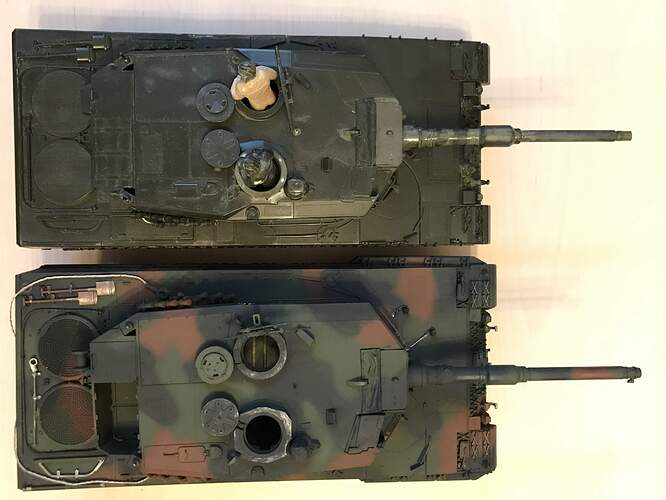 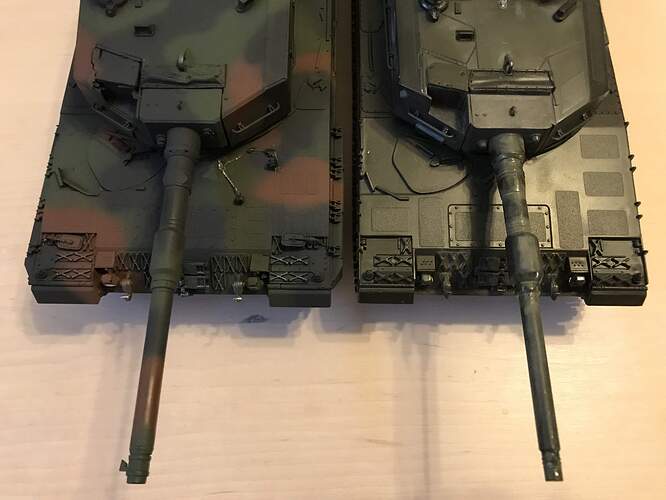 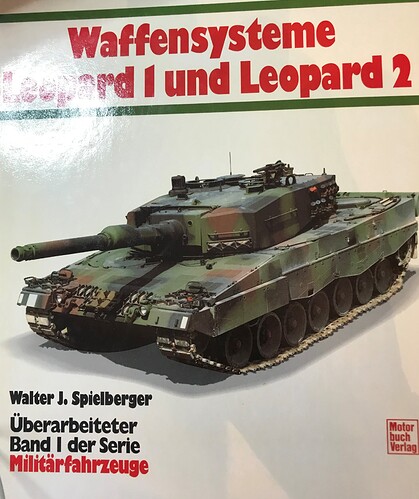 @2505-Steven, Stephan, sorry for all the Leo questions … hopefully yo ucan help with this as well … The A7’s are they in mainstream use in Pzr Battalions ? and the Leopard 2 Revolution … is that a one off concept tank ??

Hi Johnny, what I can tell for sure is that the Leopard 2 Revolution is concept tank and built for exhibitions to show what is possible. It has a very similar layout to the Leopards operating in Singapore, Indonesia and planned for Turkey. There is another concept, the Leopard 2 PSO. It is also intended to show what can be done to further improve the Leopards. A lot of Leopards were sold into different countries which have demand to keep them modern.
The Leopard 2A7 has been introduced to German Bundeswehr, but only in small numbers.
I know that the 2A7 and the later 2A7 V is presently only for PzBtl 203 (Panzerbataillon 203) in Augustdorf.
Source: Wikipedia Leopard 2 – Wikipedia

I know that the 2A7 and the later 2A7 V is presently only for PzBtl 203 (Panzerbataillon 203) in Augustdorf.

Great info Stephan, Thanks. I know Augusdorf well … I was based in Detmold and Sennelager