I’m finishing off a build and had applied a Matt coat after the decals, but noticed a scratch built tarp was still a little glossy. I only wanted to dull down the tarp further. I was happy with the rest of the model so didn’t want to apply further coats using the rattle can as it’s a bit of a scattergun approach.

I’ve previously used x-22 gloss in an airbrush successfully for gloss coat under decals etc, so assumed x-21 flat base would offer the same for a Matt coat.

I have tried it previously in an airbrush, both on its own and with x-22 for a satin finish unsuccessfully. In my ignorance I put this down to poor airbrushing technique. I therefore tried brush applying to the tarp having mixed with x-20A thinner, but unsurprisingly that was somewhat unsuccessful.

I now know that you can’t use x-21 as a Matt varnish, so lesson learned. If however I ever want to represent frost on anything x-21 is my go to!

Fixing it wasn’t an issue. A gloss coat got rid of the frosting, but I’m back to square one re the glossy tarp.

Any suggestions ideally without buying more Matt varnish (although will do if I have to). I have wondered whether I could decant the rattle can some how which is an acrylic Matt varnish. Would this be brushable?

Yes, I made that mistake once also. Now I always read the directions for use, if there are some.

Been there done that… I was thinking ‘Flat Base’ was a Japanese to English translation gaff and it meant matt clear. I think a lot of modellers did this at one time or other.

Yep. Made the same mistake myself once: a pretty decent three color NATO camo scheme on the Trumpeter LAV-25 turned into something looking like a heavily-glazed Krispy Kreme donut… @#$%!!!

I was solidly on the wagon after that mishap and have never touched Tamiya Matt ever again! My go for a flat coat to became Model Master Acrylic Flat, but we know how that went…Wish I had a suggestion for a good matte coat.

Here’s the key to making Flat base Tamiya X-21 work as a matting agent:

Straight from the bottle or mixed with thinner it doesn’t work as except as a frosting agent.

There’s a special technique to getting it to work as desired.

@Mead93 is on the mark, Tamiya x-21 flat base will work as a matt agent when used with Future as described.

Hopefully, Matt will see this and comment in detail too.

Yes, 30 % Flat Base 70% Future gives you a clear dead flat coat that won’t frost or milk on you. In mixing terms it’s 3 parts Flat Base to 7 parts Future. Just mark an empty bottle into 10 segments with a Sharpie and life is easy to mix up the flat coat. I have been using this mixture for decades and never had it go wrong for me. Shoot it straight from the bottle. Several light, thin coats built up until you are satisfied. You’ll see the progression. It is also brushable for touch-ups and small parts.

Adding a flat base to an existing color seems like it would have the flat base carrier fighting with the gloss base carrier already in the mix. My thought ~ “it might work and it might not.”

I suggest you achieve your final desired level of gloss by using a final clear coat in the gloss level desired.

Been doing both Armor and Model Railroading for, you might say, a few years, (sometimes in the SAME model) So I always choose a Matte finish surface. My best recommendation for the job would be Tamiya TS-80 Matte Clear in the rattle can. *(I consider it the best flat coat in the industry!)

Warning: did not come here to argue. ~ to each his/her own.
The man asked a question and I am giving him MY answer.

I set my decals using Future Floor Wax which always leaves an ugly and irregular shine to my models. I therefore go over the model & decal with a final (very dry) coat of the Tamiya Matte Clear. 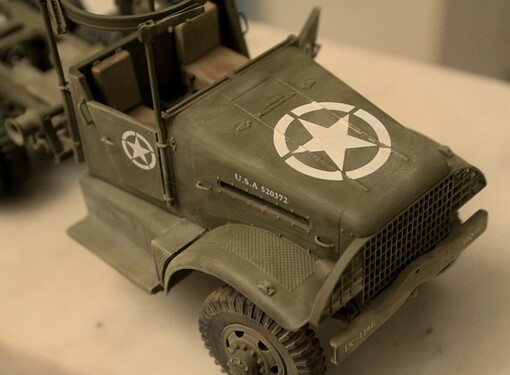 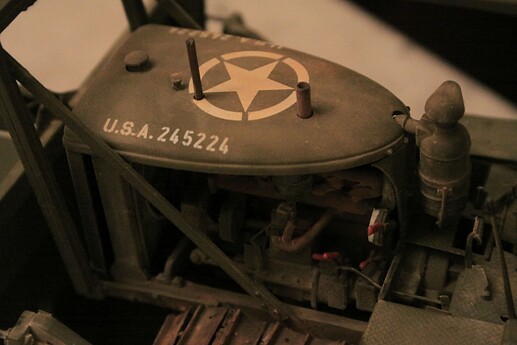 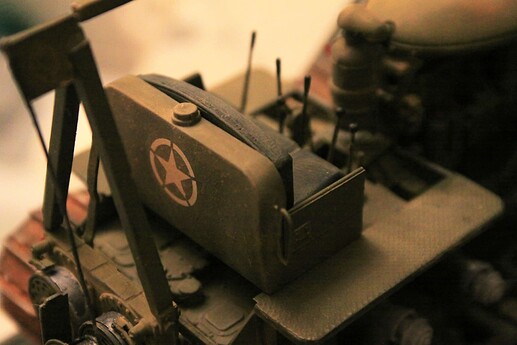 As I say, when setting decals the Future Floor Wax will leave a very smooth* but ugly shine around your decals as seen here: 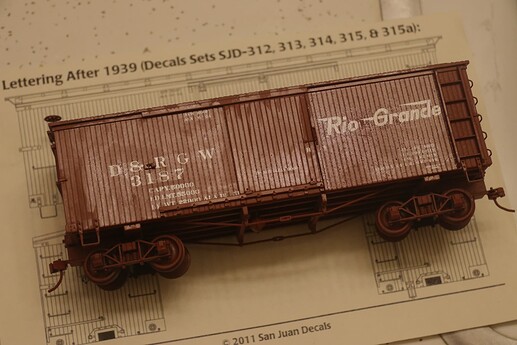 But not to worry, as the Tamiya Matte Clear will save the day!

*The Future may leave an ugly surface shine but it also leaves a smooth, flat (as in non-rough) surface that will most certainly help to seal in those decals and also helps to hide that tell-tale decal film edge.