Received a Chinese New Year Greeting from AFV Club this morning with this attached: 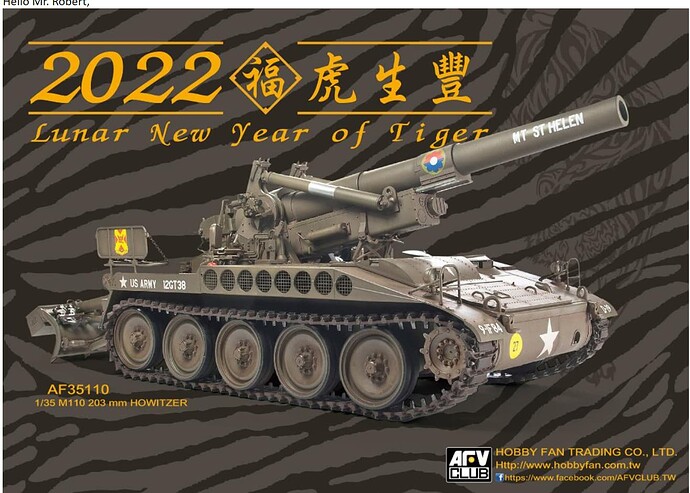 Of course, this may not be news to all you Facebookers out there, but it was news to me. The first thing I noticed was the plumbing. But wait, there’s more! 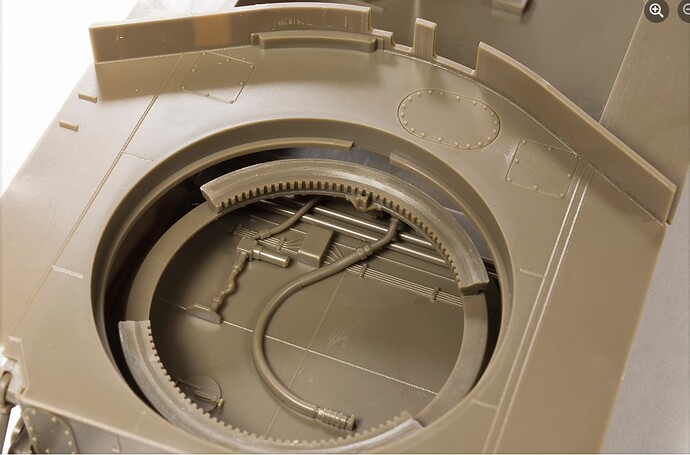 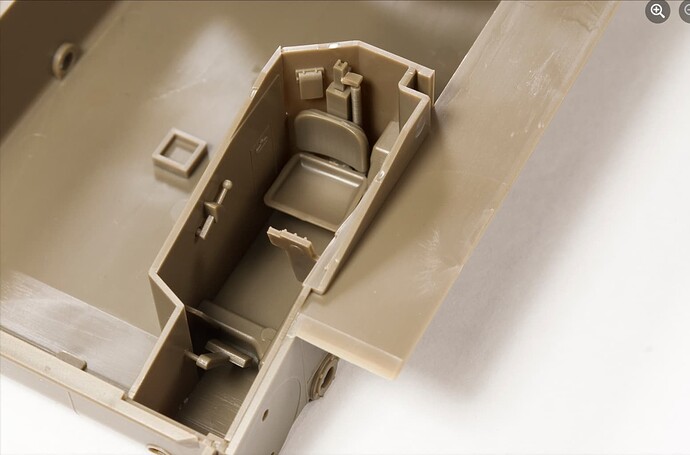 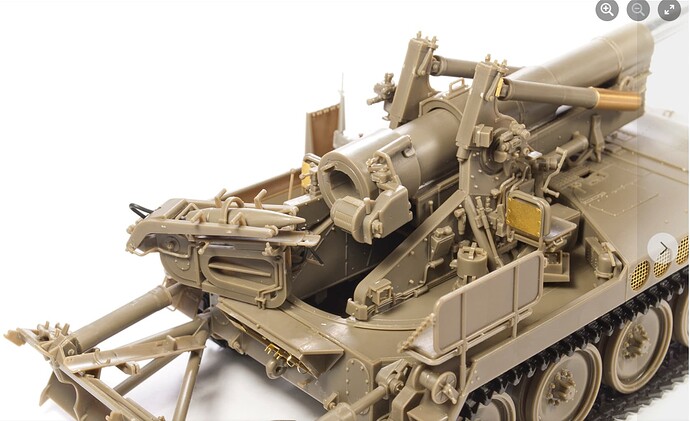 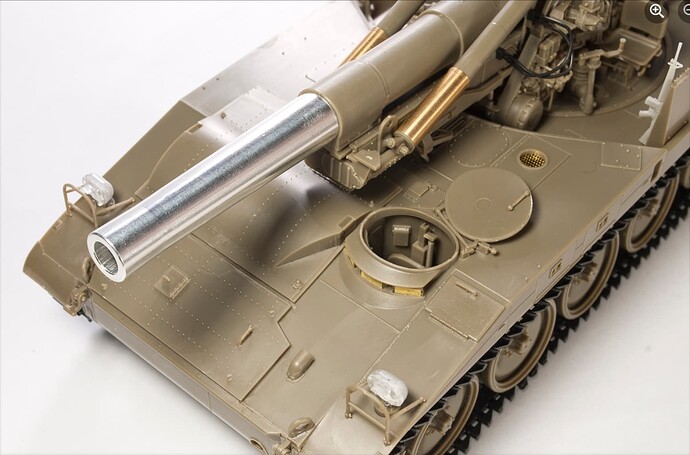 Those torsion bars look like separate pieces, and the wheels have the lip.

Looks like a great kit , however I don’t know much at all about SPGs. Drivers compartment? Wow

The old kit and its relatives, the M110A2 and the M107 - essentially the same kits with different barrels, had a horribly misshaped loader, the barrel had the the wrong dimensions, the wheels had no lip, and the list goes on. And don’t get me on a tangent again, but a somewhat recent review (a few years) of the Tamiya resurrection mentioned none of those things - just stiff track. This kit is light years ahead of the Italeri OR Tamiya offerings.

I always find the anonymous email amusing. The one informing me I’m a day late and a dollar short. That it was announced on Track Link in December. Sorry dude, I don’t follow them. Anyway, good news for many of us!

Looks great. I remember the old Italeri kits yes. Didn’t Verlinden come out with an all resin job ?

I wonder if AFV Club will follow their past practice a release tracks and suspension sets that you can use to dress up the Italeri kits?

Now of course I would love to see them do a M578, since that vehicle was based off of this chassis. One can hope…

They have released the track without suspension and wheels Tracks are all I really would want for the two 110’s that I have in the stash already. Those will work just fine!

Nice. The hoses and such under the turret are really nice. The driver’s area looks a little sparse.

There is a really nice 3D printed driver’s area on Shapeways.

I think I may be good though. I have the old Italeri kit, M110A2 metal barrel, 3D driver’s area, and Spade Ace metal tracks. If they offer just the running gear as a separate set, I may get them.

The very first time I was on top an M110 (or M107) was that I noticed all the hydraulic lines on the trunion.
Looking at the pictures, it looks like somebody did a reasonable bit of research. When your up there there are stainless steel lines all over the place on both sides. That alone sells the kit for me. I kinda hope the spade will be positional.

I see two coming my way in the near future, and then bring on the 175 gun!
gary

Hi Rob,
AFV Club still send New Years Cards? Usually after I got mine for western NEW YEAR, I got the kit despicted on the card, had a hell of trouble to explain the price of the kit to German coustoms officers.
Oh Glory Days, how I miss it!

I get the Chinese version, I guess because being married to a Chinese gal I’m a member of the club. Might come in handy if they ever do attack like Border Models seems to think.
I’ve got more free kits than I can ever build, but they just keep coming!
Maybe if I just stop helping them out, as I know you do too.

On the other hand, if Indian Motorcycles would like some of my ideas. I’ve got room…

The AFC Club tracks for the M107-M110 were on display (with a sample to view) at last year’s IPMS Nationals. I believe there was also a test-shot lower hull.

My cunning plan is to purchase the AFV Club kit and to try and use it as a master to modify my Italeri ones. Of course, I might be doomed to failure but as I have both an M107 and an M110 in my stash, I’ll give it a go. I’ll end up with 2 x M110s so I’m thinking Bundeswehr and Brit; as I say, that’s the plan. Fruition? Fat chance(!)

I had a cunning plan as well. As a linguist, I explained to her after I asked what you call a man who speaks six languages…

At any rate, a master how? To look at the plumbing and replicate it? I can send you all the photos you need for that. Or a master to cast more accurate pieces, such as the sadly misproportioned loader that comes in the Italeri kit? There’s also the issue of the barrel. Not the front portion, but the area with the thicker bands. Not only is it dimensionally inaccurate on the Italeri kits, it is actually reversed as well. It’s a somewhat easy fix, providing you have another kit you’re willing to sacrifice. I have measurements for each section from the breech all the way to the muzzle. I’ll pass judgment once mine arrives.

Thanks Rob; I’ll wait and see what the actual kit looks like but if the plumbing is acceptable I’ll certainly try and replicate some of it, probably using lead wire. Thanks for the offer re the pics but I’ll wait and see I think - I’ve just got so many projects half-started and I promised myself that this year I’d grip it all. Here we are in February and I’ve done next to nothing.

Probably even I could scratch/embellish/alter the loader once I have the AFV kit. What I’ll likely end up doing is awaiting your review and efforts!

Thanks for the amendment; clearly losing it today - been to the gym too much already this week - brain function not what it should be(!)

Hopefully somebody will make a weather protection as accessories kit. Most of the M110 (A2) from 42nd Field Artillery BDE here in Giessen /Germany have had this.

That would be nice! I used to feel sorry for the crews of those things, fully open and exposed to the weather, no way to stay warm and dry. My tank was nice and comfy!
Ken

actually the M110 is not really all that bad. They ride pretty good, and won’t make you toss your dinner bouncing up and down like the M107 did. You just sorta learn what to grab and then hang on. The very first M109 I was in was kinda spooky. Real tight in there. It was one of the oldest issued and didn’t have an exhaust fan like the newer ones were to have. After four or five rounds it smelled like rotten puke in there. The M108 didn’t have that issue. The nice thing about the M110 / M107 platform is that it really spreads the crew so they are not on top each other.
gary