For a customer I work for. 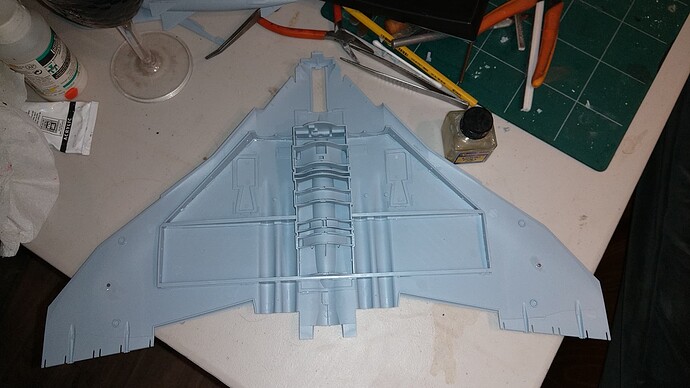 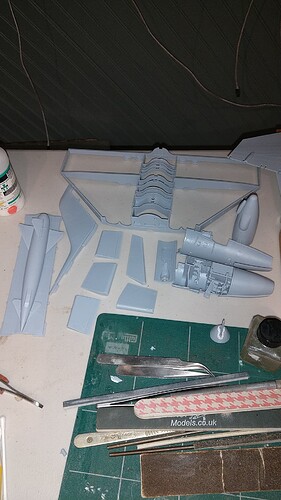 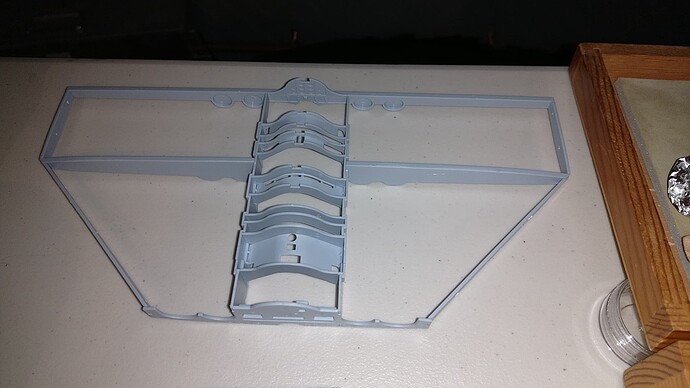 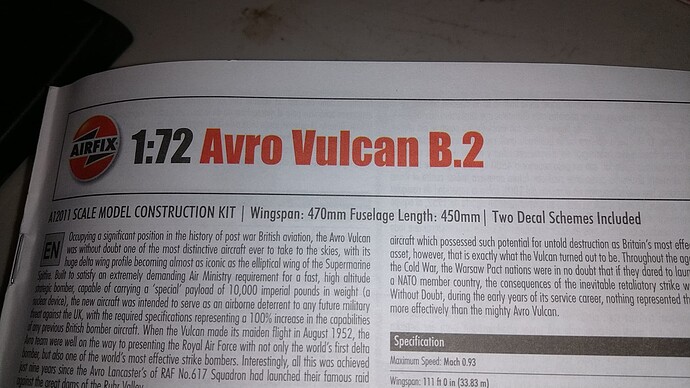 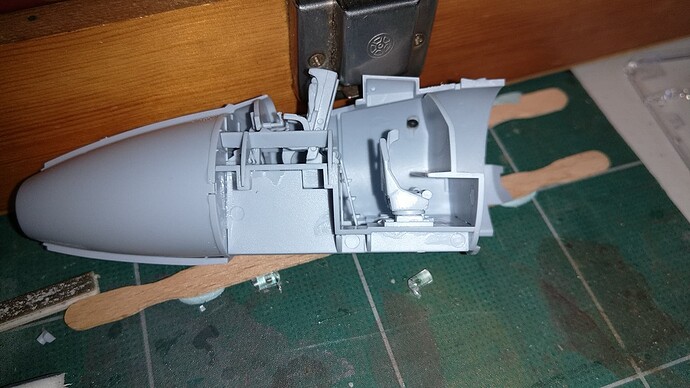 I had a look-through of the instructions and was amazed at how complex and detailed the build was! I’m not quite sure I would tackle it!

Goes together like a Tamiya kit, not the old airfix way.

NIce big bird Frank, will be tagging along on this one …

Will be following along too …

Right to Keep everyone happy some more,
as I’m not one for building planes, most of the filler is my issues rushing and not test fitting wing and body to nose.
Been taking myself to the corner and having a word.
Other wise happy with progress ,now to figure out mounting it to 8mm plumbing pipe and base. 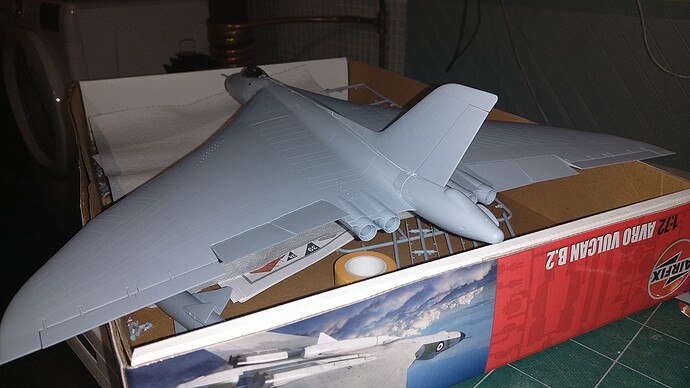 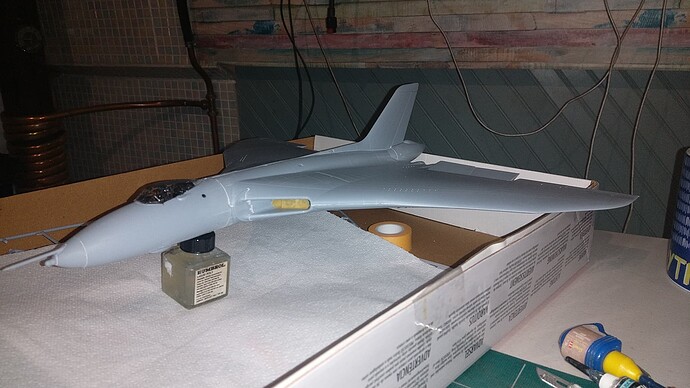 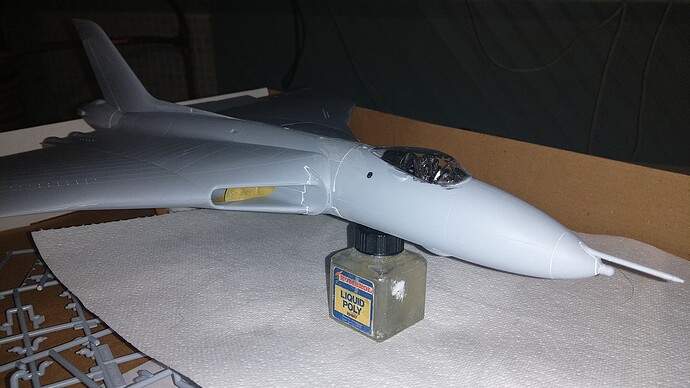 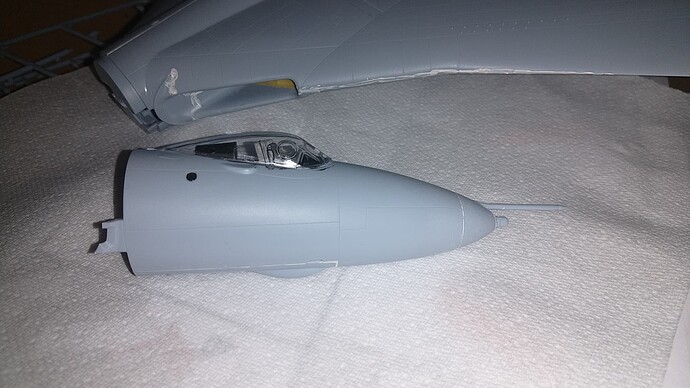 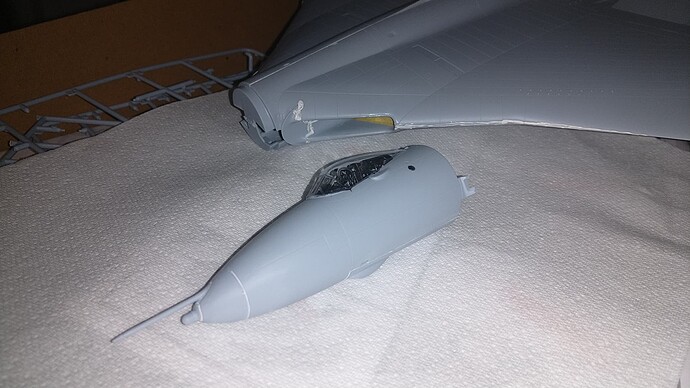 That is coming along very nicely Frank… And as they say… It’s a bit of a beast…
Is it having a cam finish or the shiny white version ?

Going for cam, white under it, as has missile

Looks great.
Only one of the new V-bombers I’ve got is the Valiant and that is a nice kit.
Got the old tool Vulcan and Revell repopped Matchbox Victor K2 I’ve had for years. One day I’ll be brave and build them!

Does the new Airfix have the underwing missile pylons? I’ve always fancied doing one of the Black Buck aircraft with Shrike missiles.

The kit has extras in it ,
that are not in the instructions,
So a possibility in the future.

The matchbox Victor, from other airplane builders is a pig of a kit,
I have seen two from one builder that have gone on to win medals, he remade most of the kit and new resin intakes.
I normally do 1/35 vehicles,

Yeah I have heard it’s a tricky one.

I got given the Vulcan by my brother in law. He bought it years ago, put it on top of the wardrobe and forgot about it. Wasn’t going to say no to a freebie!

Phantom - The newtool kit has everything in it for a black buck Vulcan except for pylons , ecm pod and shrikes . Vertical tail cap and nozzles are in there . I expect a bb version in the future from airfix .Frank - you’ll love it - It comes out pretty well 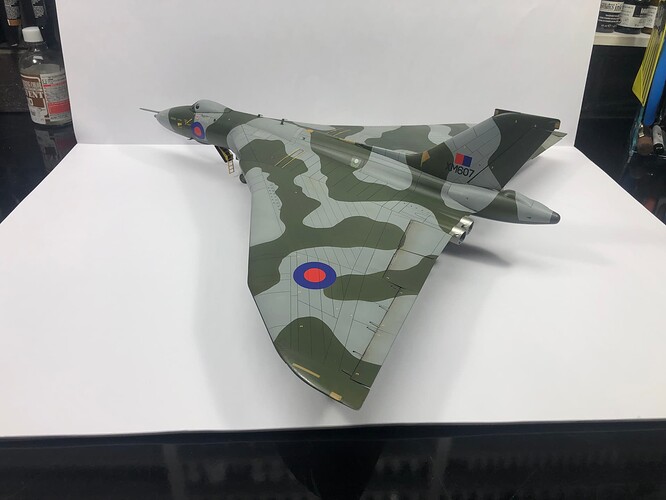 Welcome Bill, and that Vulcan looks fantastic - both top and bottom views.

Welcome bill, that is very nice model, glad someone who knows the kit piped in, did you do the bomber or blue steel.

Frank - i did the black buck 1 mission . Used the pylon and ecm pod from an airfix buccaneer (the pylon is wrong but the pod is correct) . It took a bit of work to get the seams right - but generally it’s a nice kit … and huge . Have another one in the stash to do in anti-flash white one day 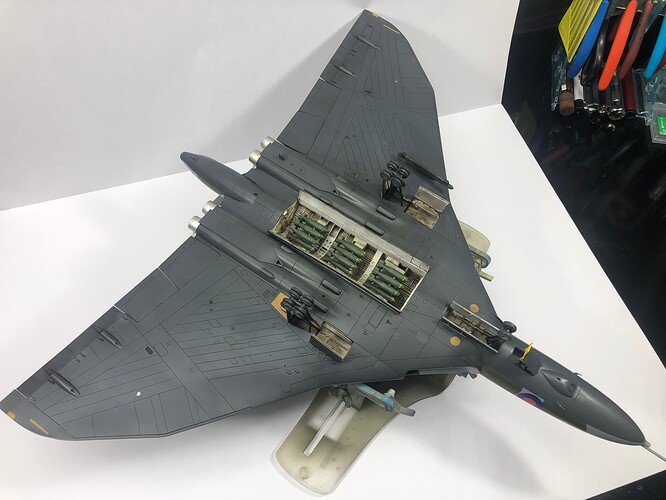 I have 2 memories of the Vulcan. When I was a young kid, i lived just outside Bristol, and whenever we go into the city, we would pass Filton/Patchway Aerodrome which at the time ( later found this out) had a large RAF aircraft Maint shop and test area there. You could always pretty much always guarantee that while passing, we would see Vulcans, Victors, Phantoms, Buccaneers, Harriers and anything else that was around in the late 70s early 80s either parked up, or taking off/landing … quite a sight for a young lad who loved model making …

The other Vulcan memory is a bit more recent … I think it must of been about 2014 or 2015 and I was quite happily driving down the M4 minding my own business on a summers day afternoon and I had just gone by junction 13 near Newbury, when, literally out of the blue a sodding great Vulcan appeared flying from left to right going north and it must of been at minimum safe height or very close to it as I could see every detail (after i had recovered from the shock lol) and the engine noise was unbelievable as it actually flew over me as I slowed down a bit and had a good 15 - 20 second view as it continued on its flight and then went up into some cloud…very impressive sight.

Thanks. I suspect that they will box it in a Falklands anniversary issue next year. 2022 being the 40th anniversary. Probably see the Sea Harrier and the old ships being reissued too.

Cracking work on yours by the way. 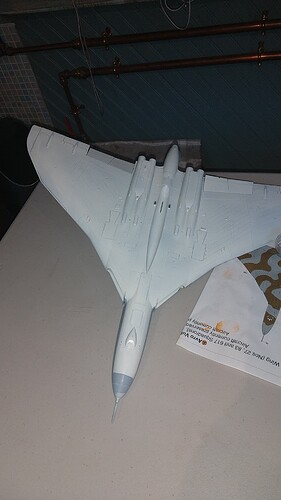 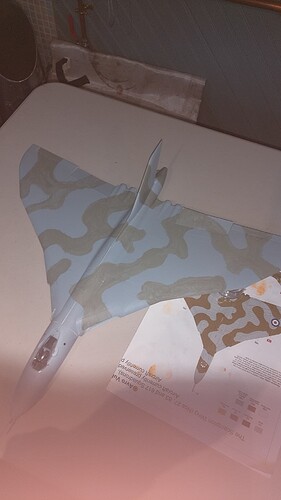