All Those American Vehicles In Postwar France

It seems there were plenty of American trucks, jeeps, and other vehicles in postwar France long after the Second World War ended, presumably with French industrial capacity reduced and the USA deciding they were more useful to the French than themselves.

Also I assume they were repainted French light green when enough of that was available?

Many of the French vehicles purchased by Israel were painted in an OD that “tended toward brown.”

We had a guy working for us who was Dutch. He was a truck driver in the Dutch army. Then he drove for the German army. Then he drove for the Dutch again when the Americans came through. He was allocated a brand new GMC, I think it was a GMC, with leather seats. First thing he did was rip out the leather seats. Replaced them with a box. His wife made him a nice leather jacket out of the seats. At wars end his truck wasn’t much more than a shell. He was still working for us in the late 1980’s. Driving trucks. And still wearing the leather jacket.

The Willys MB Jeep was even built here under licence by Hotchkiss as the M201 :
https://en.wikipedia.org/wiki/Hotchkiss_M201

The US did NOT want all those trucks to come back to the US and wreck the truck building industry post-war. They sold or gave away as much as possible. Sweden bought a lot of trucks which were then used by the army, the navy and the airforce. Sometimes in the original form and sometimes rebuilt with new cabs and other additions.

France also used surplus equipment. Many 2½-ton trucks ended up as all-terrain fire trucks when the armed forces were done with them. Sometimes also in civilian use.

Lots of trucks and jeeps were sold as surplus to anyone who wanted to buy. Many of the heavy wreckers, heavy trucks and tank transporters went to civilian heavy haulage. M26’es, both the armoured and the un-armoured cabs, were used to haul heavy loads (power plant equipment).
The armour added to the traction by adding weight …
Many of the trucks were also used by circuses.

Just as a side note. I had a friend who was in the Australian army. He was a laundry man! Yup no medals. But he did get wounded badly in Korea. (Long story for another time). After Korea he became an explosive ‘expert’. No idea of the real title. But he worked on stock piles of old ww2 munitions. Detonated shells etc etc. Lots of it already sweating. Lost a pal because he wore a nylon shirt that caused a spark. As a part of his job back in Australia he also buried lots of ww2 equipment. He told stories of trucks, planes all sorts of stuff going into holes or being blown up with the munitions. A lot of American equipment was also barged out to sea and dumped. Nothing was going back to the USA.

So we would be carrying on a ole family tradition by leaving equipment overseas? Hmm same party/same plan

It has nothing to do with the political party in charge at the time. It is actually cheaper to leave equipment in country at the end of a conflict than it is to bring it home. Shipping costs are very high, and most of it is worn out or at least well worn. Many of the vehicles would need to be extensively repaired before they could clear US customs and Dept of Agricultural inspections before being allowed to ship as well. Also, we usually assume that the side we supported will continue to operate and use the equipment for their army. Unfortunately, that doesn’t always hold true.

We have always done it though. 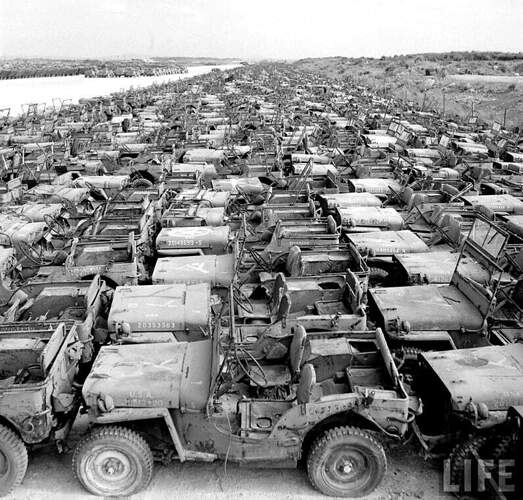 It has nothing to do with the political party in charge at the time. It is actually cheaper to leave equipment in country at the end of a conflict than it is to bring it home.

Yeah I know, it was a joke. How bad depends on ones point of view.

There’s a site dedicated to GMC CCKWs in the Netherlands after the war.

Let’s not forget it took four long years for America to ship all that stuff out in the first place, so would take as much effort to get it all back. There just wasn’t the money or willpower to recover more than a fraction from all across the globe.

Besides, how would we get to see all those cool post-war conversions to inspire our scratch-building? Good thing Uncle Sam let everyone get some…

Equipment this time was left behind and is now in the hands of the ‘enemy’. Did that happen in WW2?

Um, yes, with the Soviet Union.

Long_tom the allies ‘gave’ the Soviets the gear after WW2. Lend lease!

All the surplus equipment helped rebuilt in many circumstances. But a lot of it was simple parked and left behind. There has always been ‘rumours’ in Australia about Spitfire still in their shipping crates hidden away in the bush.
What amazes me are the numbers. Of all the B17’s, Spitfires, Shermans and even Jeeps are now so rare. If only someone had realised what value they would be in 2020.

There’s a museum in northern Australia, Herberton, There you can find many US and British trucks. All unrestored and just as they were when retired. 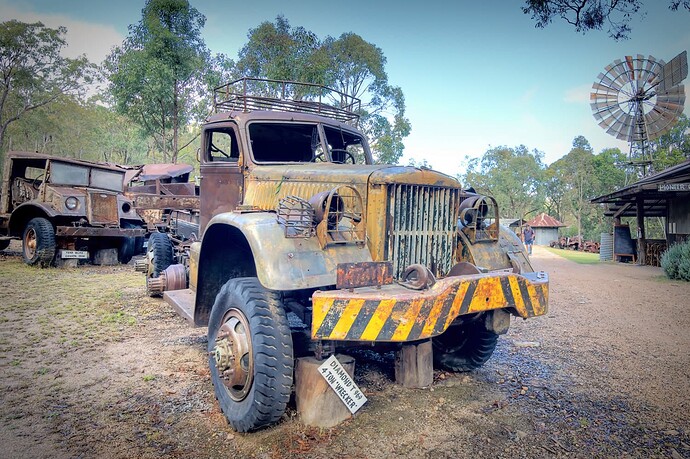 If all of them had been kept for the future (i.e. for collectors today) they would be a dime a dozen.
How many jeeps can one single collector take care of? If there were more jeeps than all the worlds collectors would be willing to take care of the surplus jeeps would be heading for the smelting furnaces.
The laws of supply and demand …

Robin_Nilsson I was being ‘cynical’. But it does make you think about all the assets that were simply abandoned.

Equipment this time was left behind and is now in the hands of the ‘enemy’. Did that happen in WW2?

Maybe not in great numbers after WWII, but the Soviets did keep many aircraft that “crash landed” in Soviet territory and subsequently copied them. A great example is the Tu-4, a direct copy of the B29.

It has happened in many other conflicts or with countries who were friendly and then became enemies though. Cuba, Vietnam, Iran, Iraq, etc… In almost all these cases, as will happen now, the equipment was rendered useless in a few month without proper repair parts and maintenance. The only exception is Iran. They were/are able to make their own repair parts and have kept Cobras, F14s and other equipment serviceable up until almost current times.