I am building the bronco archer and it’s time to decal. I have a question about the allied penta star markings. In the instructions, 4 of the star markings are “level” with one point, pointing straight up. For some reason the star on the left side of the hull is canted. I’m guessing this is an error in the instructions and all of them should point up, but I wanted to check to see if anyone knew 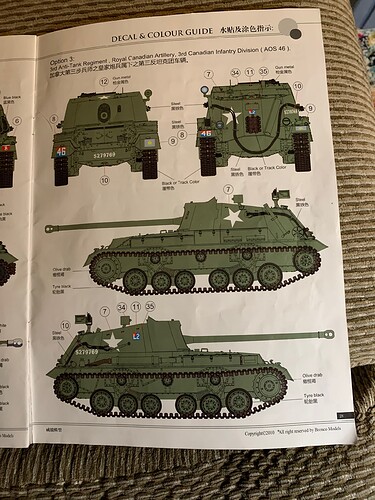 Point up was “official”. I can’t remember where I read it, but I’ve seen mention of Canadian units (or individuals) intentionally painting them crooked or upside down as a snub to the Americans. I’ll see if I can chase the source.

Edit: So the reference was on Canadian Soldiers but it’s unsourced. There is however a picture immediately below with a C.60 truck in a ditch with a clearly crooked star on the door.

Perfect! Love this forum! Someone always has a quick reference. Thank you.

but I’ve seen mention of Canadian units (or individuals) intentionally painting them crooked or upside down as a snub to the Americans.

Heh… of course they did…

It always drove me nuts that our allies used our “white star”.
Today, I live close to Luke AFB where CF-18’s come down to train.
With a pair of binoculars you can clearly tell the Canadian aircraft from others.

I think, like Canadians, it gets somewhat up our noses when an Allied action is credited to the Americans. Mind you the same applies to the British. Nth Africa is often referred to as a British campaign when in fact it was often a Commonwealth action.

Trivial? Maybe but many of the old timers still have a chip on their shoulders about it. Australian’s did much of the hard graft in New Guinea yet the Americans often take much of the credit.

Everyone appreciates the American effort. No question. But there is often a middle finger involved.

There was a saying in Australian about America troops. “Over here and over sexed”. Say no more.

Yes Bruce we see this a lot in many of the history documentaries that lump many battles under one country. It must be very frustrating for many of our Allies at times. Some US commanders even during the war simply would not give our allies any credit for there sacrifice. MacArthur did this with respect to the Australians all over the pacific it seems.

Didn’t the British use the same saying btw?? Lol

Not to mention everyone always forgets how much heavy lifting the Indians did.

metalhead85 in many instances in New Guinea the Australians would captured a hill only to be told to withdraw until the Americans caught up. Then the Americans would retake the hill.

In the likes of Burma you rarely hear a word about the Indian troops. Same in Nth Africa. Indian troops, along with other nationalities, never get a look in.

Look at the story behind the Rats of Tobruk. https://en.wikipedia.org/wiki/The_Rats_of_Tobruk Yet I see British troops making the same claim. I guess it depends on which pair of glasses your are looking through.

There was a saying in Australian about America troops. “Over here and over sexed”. Say no more.

The Brits said about us “Over paid, over sexed, and over here!”
Ken

Getting off topic a bit here but some may be interested in the battle of Brisbane. https://en.wikipedia.org/wiki/Battle_of_Brisbane

Yeah I remember hearing that story. Messed up lol

The Brits said about us “Over paid, over sexed, and over here!”

US troops replied that the British were “underpaid, under-sexed and under Eisenhower.” Returning to the original post, I doubt that stars painted askew were editorial comments. More likely it was some exhausted enlisted man with a stencil and a sergeant screaming at him to “get those vehicles done right now.”

I wonder if that specific vehicle had that one star crooked?

Hard to say. I had the same question. The only picture of it I can find shows the side with the straight star.

Much like US Army tank battalions in the Pacific theater in 1944/1945 having “US Army” stenciled on the hull sides by the serial numbers instead of the standard “USA” in order not to be confused for Marine Corps tanks by the press photographers. I recall reading that some army generals had real heartburn over this after seeing such photos in newspapers or magazines.

I recall reading that some army generals had real heartburn over this after seeing such photos in newspapers or magazines.

Probably the same that had a spur up their bottom from the Corps WW1 coverage, though in some cases rightfully so. It did prevent Marines from landing in Europe to assist the Rangers at Pointe Du Hoc.

Yes, General Marshall said to have made a remark that as long as he was Army Chief of Staff, no Marines would serve in the ETO.