Almost done, but I'm not satified

I know it needs to be dulled/flattened down, but something else is wrong. Comments. 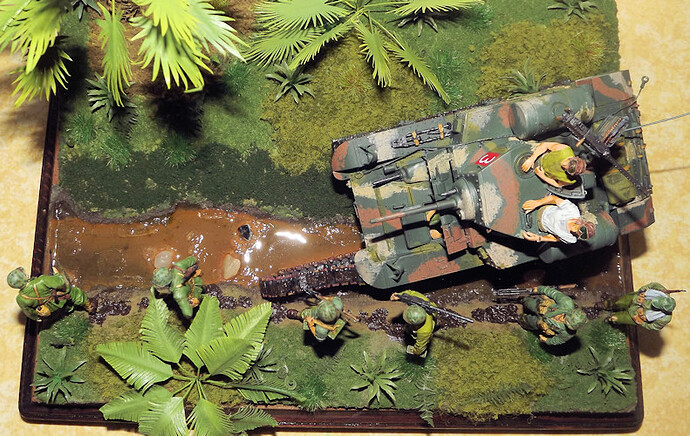 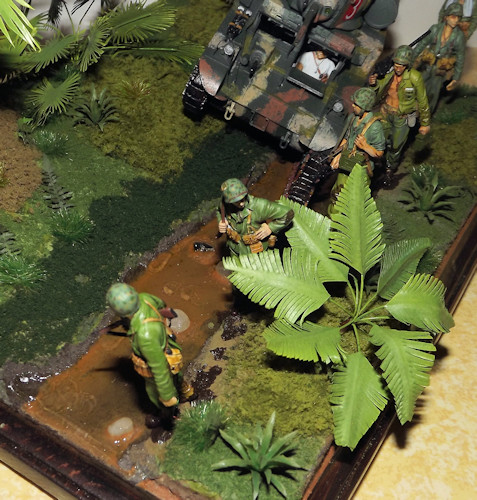 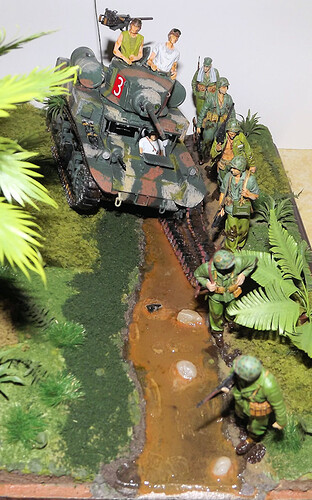 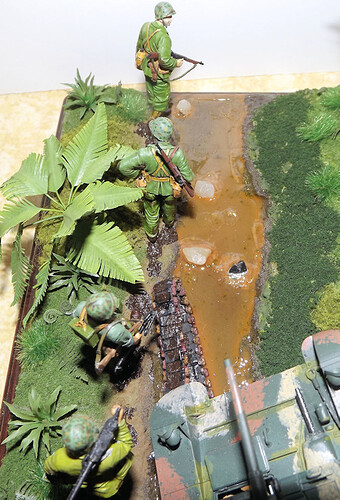 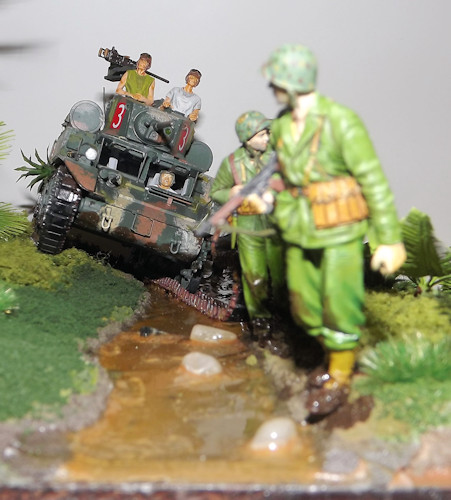 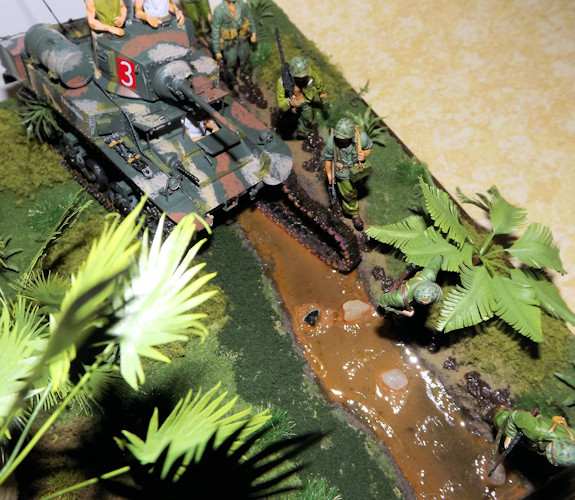 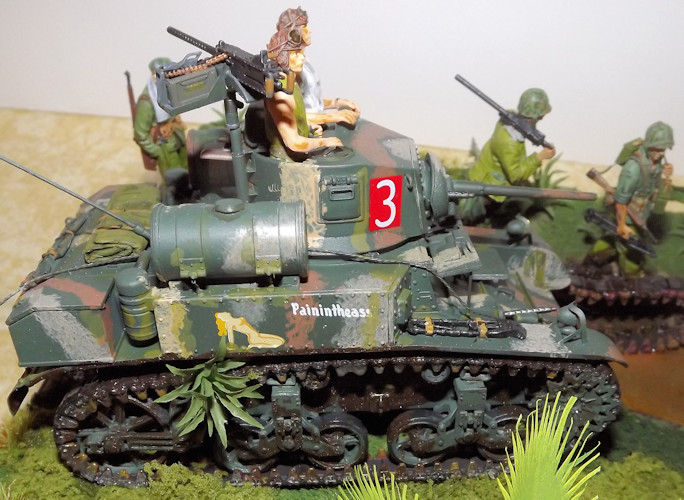 What in particular are you not satisfied with?

First thing, get rid of the white T-shirts. They would have made excellent sniper targets. I doubt if Government-issued T-shirts would be white.

They were at first. Keep in mind the Marines were often last to get the latest gear. 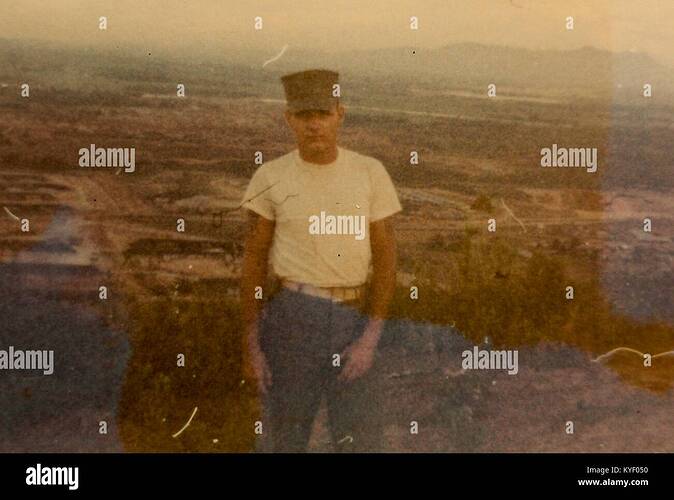 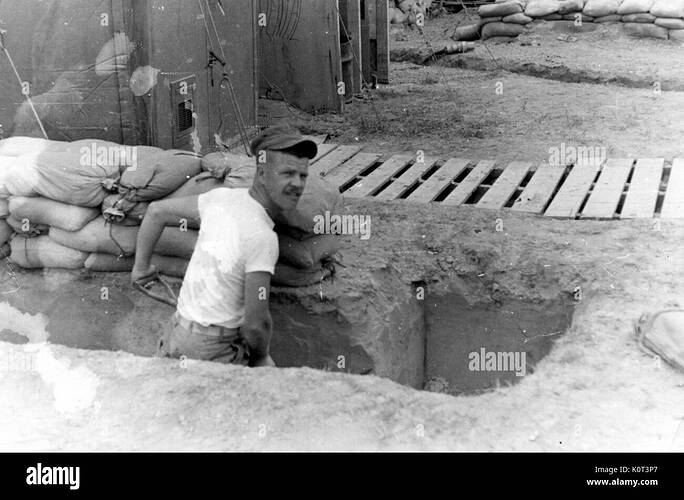 Hard to give any advice because of the photograph. The colours of the image? Are they real or close to what the model is?
The only thing I may suggest is the waters edge. Too neat. Needs a few sticks, stones, grass etc just to break it up a bit. But that’s just me.
It’s a fine job regardless.

Hi Lloyd. Nice idea and layout. You have a great proportion to sight with the low plant life to the front, and the palm at the back giving the upward rising view point that works well.

I don’t want to seem too critical here, and you did ask for comments, so if can give some positive feedback of what pops out to me:

In the last pic, the side on view shows a big gap under the centre of the track. Foliage would have been compressed right down by the weight, and any undulation would cause the suspension to articulate to compensate. Cut out the foliage underneath to allow the track to settle into the gap to make it look like it has pushed the plants down.

Please take this as intended, I am not criticising, just giving you some ideas that I hope will help you get this where you want it to be. Cheers.

…and as to the white T-Shirt, that would last 5 minutes that colour before sweat, grease, oil, dust and just about anything else around stained it. Check out the second pic barnslayer posted above and note the sweat.

If you have a card ration box lying around, maybe use the lid off that with ‘Call AAA’ written on it and held by one of the tank crew as a joke. That too would help the hands out front look by having a reason to be like that. You could even have the second guy hold something too - “Need a push!”, or some such.

Seeing as everyone is going forward, would that track be sticking out in front of the tank or should it be behind the tank?

The sprocket at the front pulls the tank forward by pulling the track up from the ground around the idler and forward over the return rollers.
If the track breaks under the tank the tank can still be pulled forward until the track under the last or second last roadwheel can’t grip the ground anymore (depends on the soil and ground conditions).
If the tank has speed the momentum could make it continue a short distance.
The sprocket will continue to pull the broken track forward and throw it fowards onto the ground.
The still functioning track on the other side will cause the tank to turn towards the broken side. Left track brakes → tank will turn a lot or a little to the left depending on speed, ground, resistance, uphill/downhill et.c… 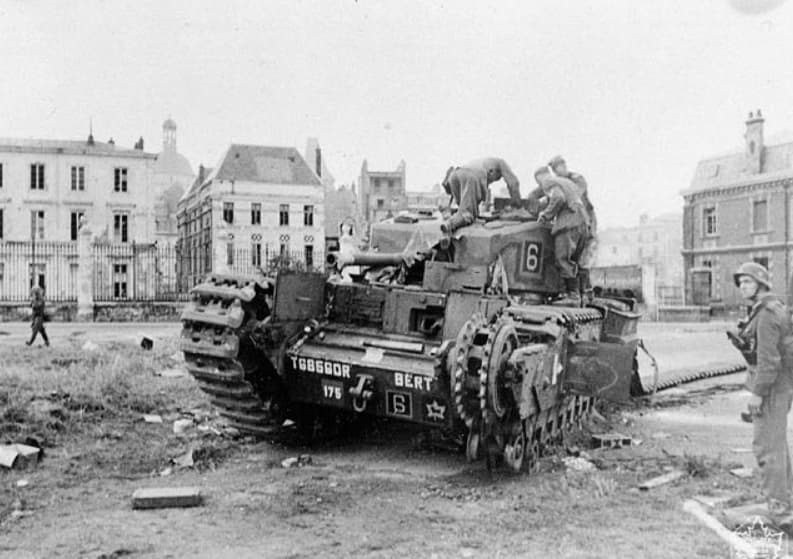 image793×559 50.4 KB
Could the speed and the still operational track have moved the tank so far
that the broken track got dragged behind?
At least there is an angle between the side of the tank and the track stretched out behind.
4 Likes
bwilt December 26, 2021, 11:55pm #11

Thanks for the explanation!

Another way of having lost a track. Were they going downhill? 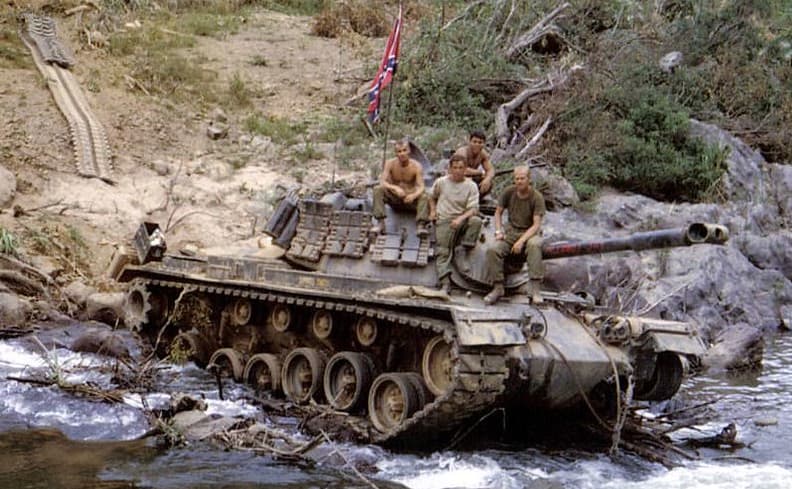 Tanks for all the input.
As a Marine tanker in Vietnam who has broken track in a stream. I will explain that part first.
When a track breaks for any reason and the drive sprocket is in the front. The driver doesn’t know right away what happened. Hence the good track will keep moving forward, slewing the tank almost sideways. The drive sprocket will pull the broken track forward until it clears the sprocket. The stream is supposed to be very shallow so it looks like it may be on top of the water. (I should have dug out a bit of the base to make it sink more.)
The colors in the pictures are pretty close to the diorama. I have to dull down the uniforms a little more.
I thought the gunners white t-shirt was dirty enough, maybe not. The drivers I will have to dirty more (if I can).
As for what petbat says think I can agree with him on the Infantry positions. The figures were actually don a few years ago and were just waiting for a use.
The .30 tripod is and should be gun metal. When I was in the USMC I was an 0331 Machine Gunner and an 1811 Tank Crewman (M48/A1/A2 & A3) .
I think the crew is my problem, there is just not enough animation in them for the situation.
So far no one noticed the .50 in place of the sky mount .30. It’s there in the photo of the real tank and crew who all have no t-shirts.
I thank you all who have given there comments. Appreciated. 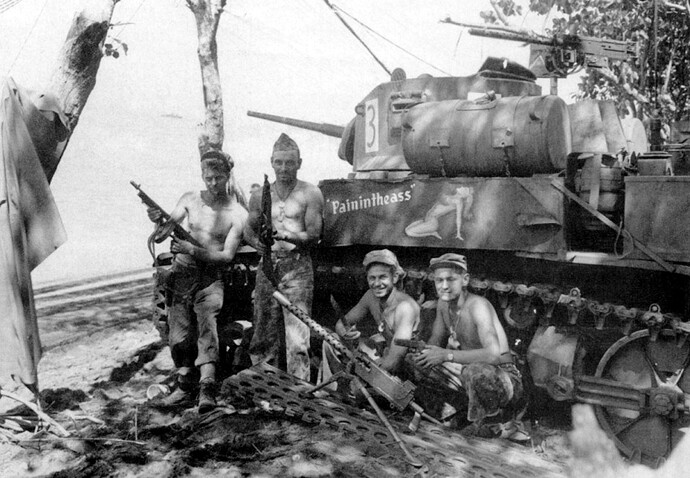 I think it’s quite nice Lloyd. Only thing that stands out to me are those unit markings on the turret. They are very red and look factory fresh. With all the trouble that crew has gone to camo their tank, I would think they’d have toned them down if not overpainted them completely.

Ha! I have done this in Camp Pendleton on a hill side, What fun that was. 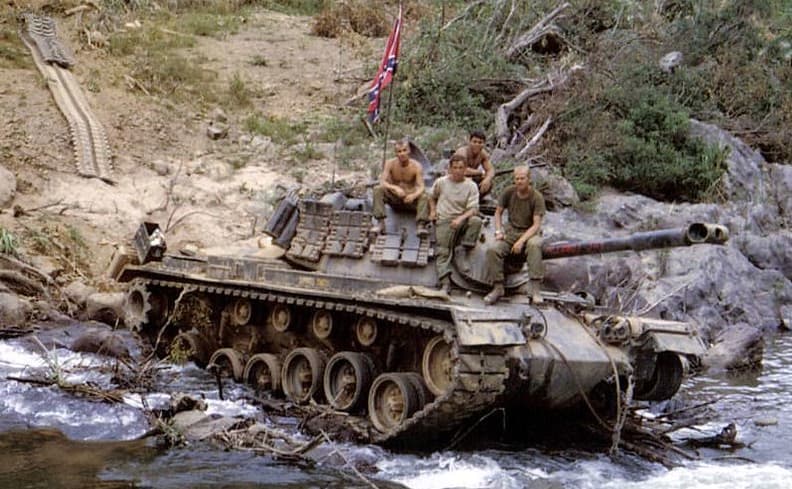 As for what would help the scene would be filters, washes and weathering on the tank and personal…
The paint is clean and fresh on everything in the diorama…
Look at the tank in the photo and you can see it has a whitish dust like look to the paint that gives it that used look. the clothing should also have some filters and washes done to them. .

The track is in a good position if the crew is trying to repair it. 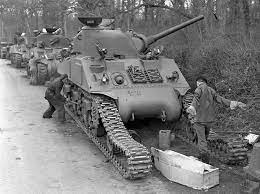 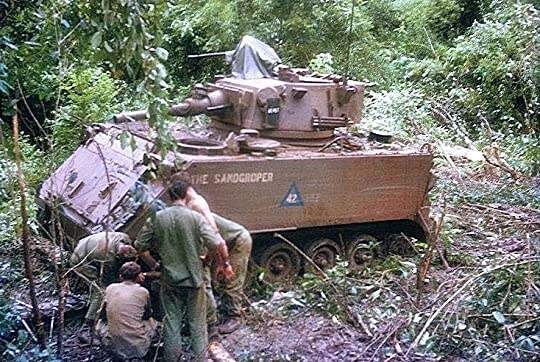 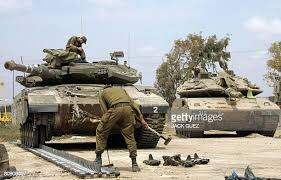 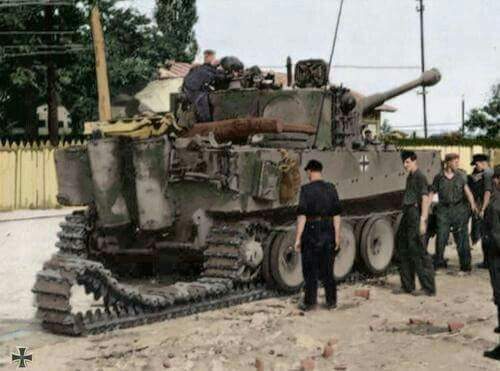 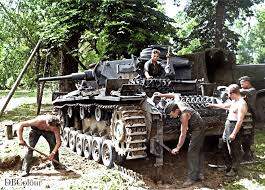 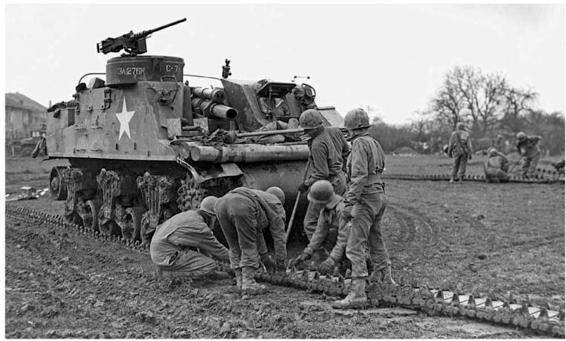 No problem, but if you look into it you will find WW2 M2 tripods were painted. If I recall correctly, they were also a little different to post WW2 M122 ones.

BTW, if any one is doing or want’s to do an M48A3 in Vietnam get my Kindle Book on Amazon “Iron Horse Marine” 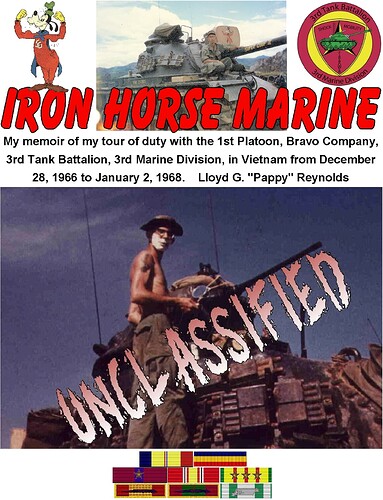 Have to see if the wife has a kindle and check it out. Was thinking about doing a 5th Tank hog from “Praying for Slack”, good thing I have two kits.

Bob Peavey is a friend of mine, his is a good book. You can down load a kindle reader for free on your computer.

too much green and not enough sand. My opinion.