Hi. I just built 3 kits from various manufacturers that were somewhat frustrating and was looking forward to a comfortable build from a Tamiya kit. I had a Tamiya Panzer IV Ausf D that I really thought was going to be a peice of cake but it wasn’t. I was under the impression that it was from 1985 but Scalemates indicated Tamiya originally released in 1975. I figured ok no problem. After I started the build I checked because it really wasn’t what I’ve come to expect from Tamiya quality-wise. After looking back at Scalemates and clicking “full history” I learned that the kit was originally released by Nichimo in 1968 and released by 3 manufacturers before Tamiya. Live and learn.

Any pictures to share of the Tamiya Pz IV D you built?

Some of the older Tamiya kits have a little challenge & frustration factor for sure. Open motorization holes, open sponsons and so on. I’ve build the Tamiya Pz IV D before and still have one in the stash. Definitely needs a few updates.

The Tamiya Pz IV D was a new release by Tamiya in 1977. It wasn’t a rebox of another manufacturer’s kit. 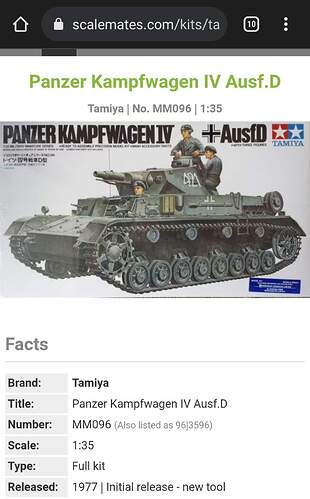 The Nichmo Pz IV G done in 1968 was different. I haven’t seen any information say Tamiya used it or reboxed it. 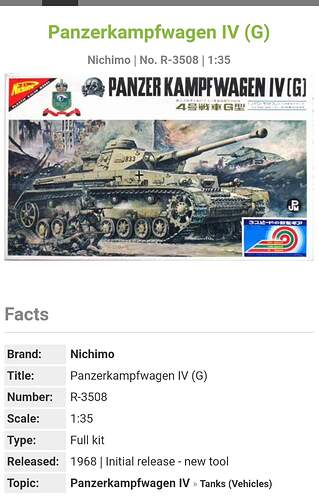 I’ve built both the Tamiya Panzer IV D and the Nichimo Panzer IV G, they have nothing in common with one another kitwise. Sometimes the information on Scalemates is inaccurate. It is put on there by members, and not always accurate. I’ve seen kits linked on there that I’ve built, such as these two, that are completely unrelated. And I’ve also seen related kits that were not linked on the site. Scalemates is damned good, but not perfect.

I recently bought the Tamiya 1/12 Lotus 49 off eBay.
I knew it had been re released at least once but I had no idea it was from 1968 . Now building it and it is fraught with so many issues that I am becoming discouraged.
It doesn’t help that previously I built one of their current wonderkits and so it suffers by comparison. I will now check on initial release dates when contemplating a purchase.

Sometimes an older kit is your only choice.

Agree that it pays to research a kit’s history, but you have misunderstood the table on Scalemates. It clear puts the Nichimo and Tamiya kits in different branches, and likewise labels the Tamiya kit as “New Tool”.

But Scalemates isn’t infallible:
For Italeri’s GMC CCKW 353, they show an ancestry of “1977 Tomy, 1978 Peerless/Max, 1979 Italeri New box”. The Tomy / Peerless kit had nothing to do with Italeri’s product in that it had a one-piece chassis, Banjo axles, vinyl tires and an operable tailgate, among many other differences.
Scalemates has been informed about this but never reacted.

Thanks people. My bad. You’d think the battery holders and the word “TAMIYA” molded into the hull would be a dead giveaway.

I guess I’m just naive when it comes to Scalemates. Well, something to experiment with some techniques on when it’s done.

I think Scalemates works a bit like Wikipedia, you log in and make the edit yourself, they then check and approve or reject, I think. Maybe that’s what you mean you did…

No, I sent a xerox of the Peerless instructions with a few explanatory words to the Scalemates editor and never heard nor saw anything in the matter.