I stumbled across the old Verlinden books on diorama building. To my surprise, it contains drawings and measurements of various US ammo boxes. Among these are:

Too bad they couldn’t make their own products the correct scale size.

Was the Verlinden stuff that bad?

This is the only example I’ll post as I find even thinking about most of their stuff distasteful. You can make your own determination. This is the T-62 engine bay they they offered. Cylinder heads too far apart. Lacking detail. Flat in appearance, much like the engine insert in Italeri’s M47 or Tamiya’s old Marder. It wouldn’t even look this good. I added the fan from something else and scratched the fuel cell. 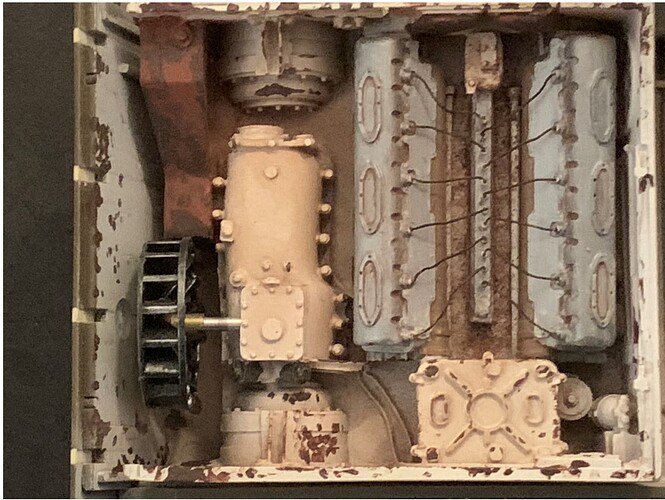 image1708×1284 195 KB
Most of the armor stuff I ever got from them was crap. A totally useless T-62 turret for example. While it MAY indeed have been accurately scaled, it didn’t fit the Tamiya T-62 because it was NOT accurate;y scaled. They should have made the “upgrade” to fit the kit.
Other stuff was crap as well.
And take a look at their figures - all wooden in appearance, often in hard to replicate poses. And they’re coming back?

And people are rejoicing about it?

I found their very early 35th scale figures to be very nice. Much later they were not so much; some of the injection molded ones actually surpassed them. I have a set of his US paras that look so bloated. And his 120mm RAF pilot had these long orangutan arms. They definitely went down hill.

IIRC, their early stuff was based off of the Airfix 1/32 multipose figures. The weapons and kit sure look to be close in scale to those items. I know that I’ve compared figure sizes and they sure do look closer in size to 1/32 than 1/35 Verlinden’s early stuff was generally very good (items with product numbers well below 300) but once they lost some of their initial master makers and started producing large numbers of different products, their accurcacy seems to have decreased.