An Oldie but a Goodie: Series 77 Vietnam Infantryman

After a trip down memory lane with James O’Leary discussing the old metal figures, I decided to find out if I could get my hands on a few of my old “Series 77” favorites. I purchased the Vietnam Infantryman and the LRRP. I had both back in my early modeling days and both are long gone now. Once upon a time they were an inspiration for modeling and for my future military service.

For those of you who are not familiar, white metal figures were the standard for quality back in the day. When I first got into figure modeling, the “Series 77” figures were still hot items and were frequently featured in modeling magazines and “how to” books (although they were quickly being superseded by resin figures). These figures were roughly 1:18 scale. Each figure came with a base and two head sculpts. Most had a small back story to accompany them.

This is the Vietnam Infantryman from “The Americans” figure line. The figure was officially named “CPT James D. McGeachy, 1st Infantry Division, Vietnam, 1966”. Pictured is the standard G.I. head with an M-1 steel helmet. The alternate head has a green beret. When I was a kid, I could never decide which head to use, so I opted to “alternate” heads on display. Predictably, that led to a great deal of “head rolling”. The metal is relatively soft, so the rolling heads also led to smashed noses.

With this figure, I briefly thought about correcting its glaring inaccuracies. Inexplicably, the late Pat Bird (the founder and sculptor behind “Series 77”) opted to use RDF style cargo pockets on the trousers. The butt pack is also off and the bug juice bottle is way too small. I decided against the corrections, and in honor of the nostalgia of the original I stayed with the flawed design. Very oddly, even though the figure is given the rank of a captain, and he has a sculpted West Point class ring, the base has “U.S. Infantry Private 1966” engraved in it. I covered that with static grass. The other major adjustment I made was in the way of the rifle barrel. The original one came to me hopelessly bent out of shape. I replaced it with a 1:18 G.I. Joe M-16 barrel. 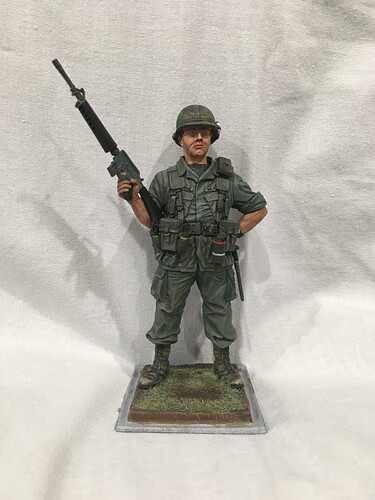 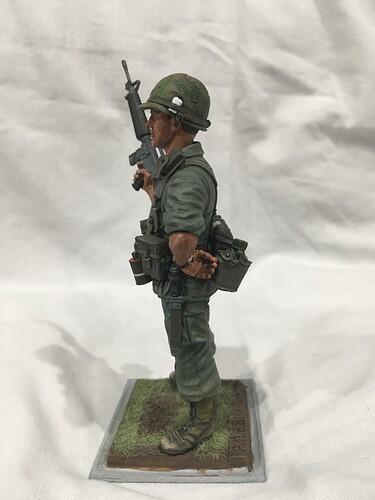 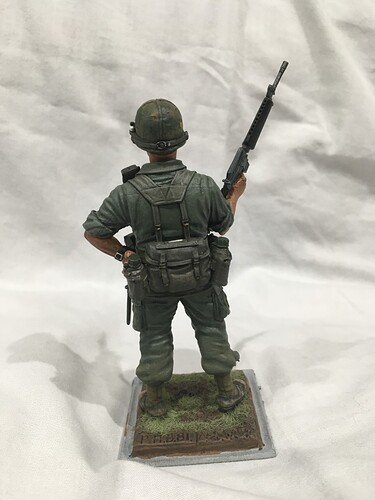 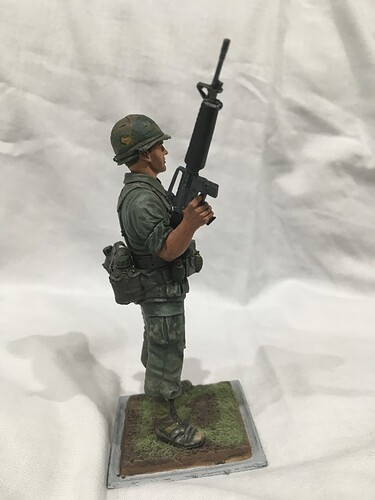 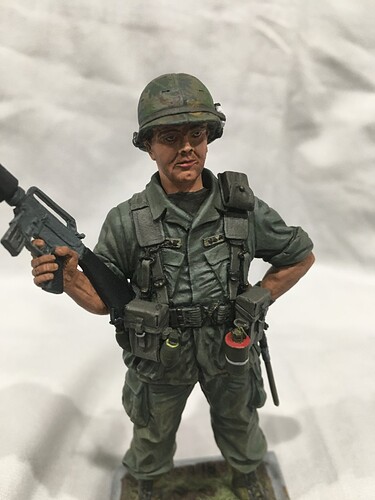 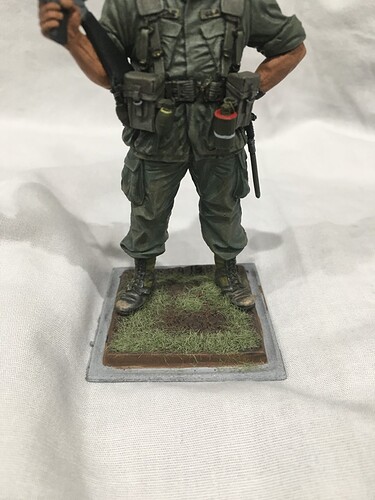 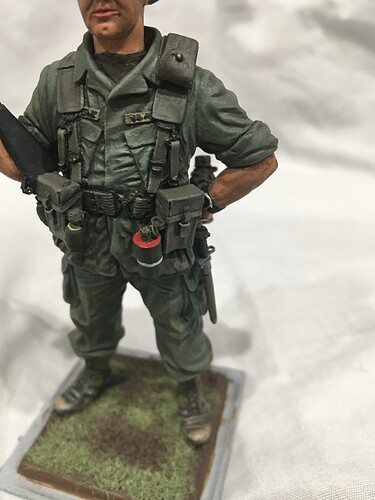 I loved the Series77 figures! I wonder whatever happened to all of the molds. These figures lead me into the world of armor modeling via the Big Bear Hobby Shop in Milwaukee. I must have a dozen figures buried in the back of my storage locker. Every now & then I think about digging them out and stripping the paint and repainting them with the skills I’ve developed over the years.
This was my 2nd favorite figure, Number one was the Doughboy.
Thanks Apache for the memories and images and perhaps future projects !

Thank you. The Doughboy was available on EBay for some time. Perhaps it still is. I intend to pick that one up too.