Here we go gents, my attempt at Alpine’s 2AD figure. This was my first attempt at the leaf camo, before I took on the USMC figure. The build, it’s Alpine so, it took about 4.5 seconds to clean up. The fence is balsa wood, suitably weathered, with a few bits of vegetation of unknown origin. There’s a few errors in there. Notably the colour of the wooden stock but, live and learn and do better on the next one. 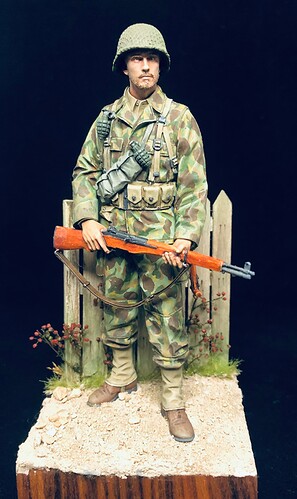 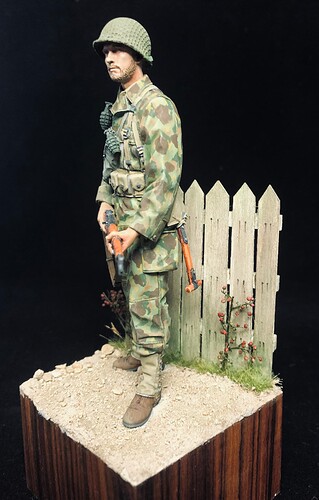 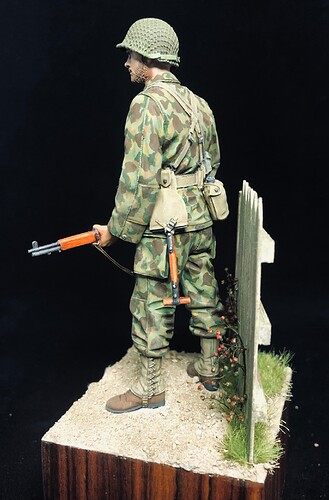 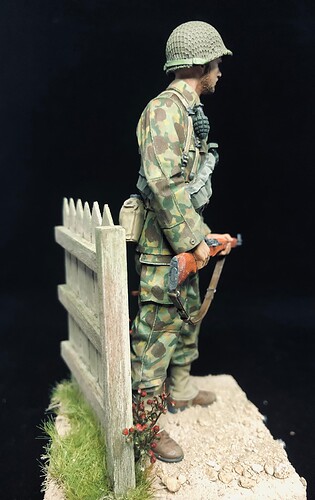 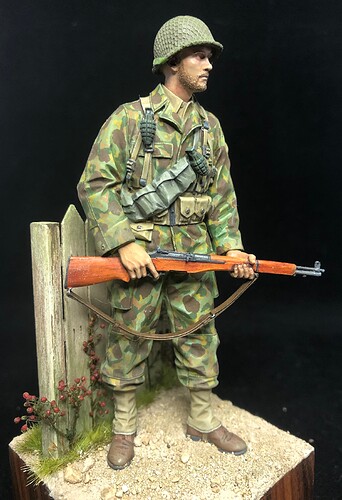 Until the next time….

Well done! I don’t know the official name for the camo of that era. It has been referred to as “duck hunter camo” in retrospect. “Leaf camo” did not come into being until after WW2.

Just a correction of nomenclature not a criticism.
You’ve done well capturing the camo of the US Army WW2 ETO!

This is a camo you don’t see too often in scale and it is always nice when it pops up- doubly so when it is a well finished, larger scale figure like this where you can appreciate the effort that went into it. I particularly like the dust/dirt around the lower legs and the fore-arm area.

Another lovely offering. Great painting all over

The way I heard it the camo uniforms were removed from American service in the ETO because friendlies were mistaking those men for German troops.

You’re right on that. I think it was withdrawn around August’44. Too many friendly fire incidents. You’re also correct on the ‘duck hunter’ name as well. I should have realised that after the Alpine Marine. Senior moment there……

Excellent paint job and build! The colors are vibrant, yet muted. I really like the fence and vegetation.

Don’t know how I missed this one Lazarus! Outstanding job on this one too. Especially the camo job and equipment. Amazing

Hey, Buddy, I almost missed this one, excellent finish!