I grew up with my dad’s Biggles books but it was Len Deighton’s “Fighter” that really gave me an interest in aviation that has lasted for more than 40 years by now. The Messerschmitt Bf-109E is of course a major character in that book but I haven’t built one yet.

A week ago, this SMS turned up in my phone: 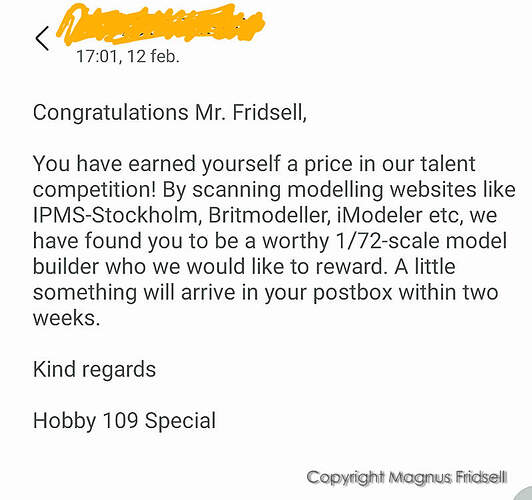 800×751 60 KB
Strange. They didn’t ask for my credit card no, nor did they ask for one of my kidneys (I wouldn’t have given them the card no but a kidney could have been subject for negotiations…).

Yesterday, I found this in the mail box: 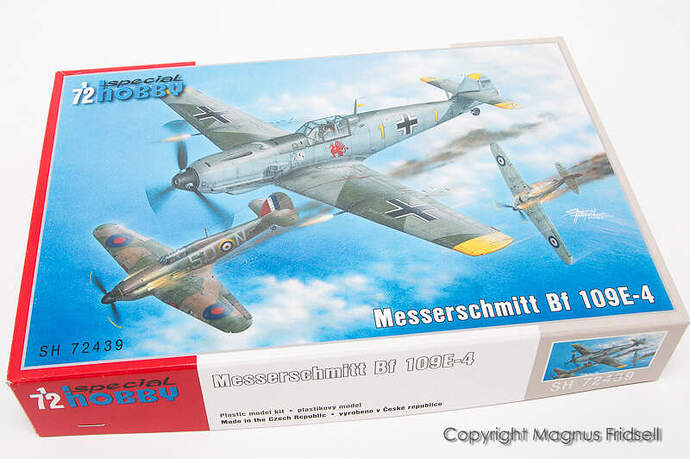 Note that the Hurricane that Gerhard Schöpfel just has shot down is the same as in Arma Hobby’s box art: 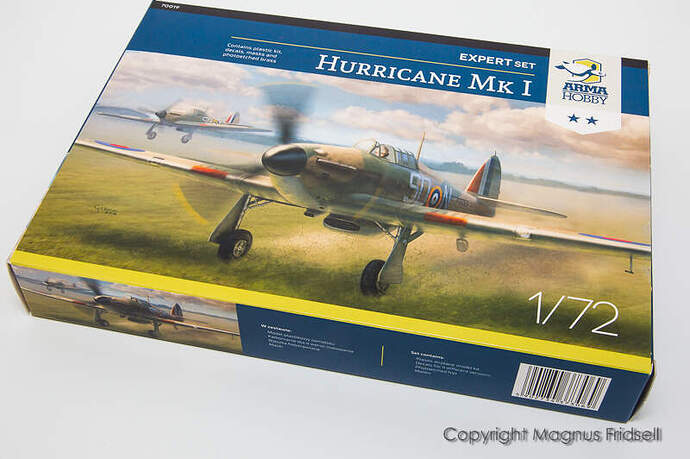 !
Rowan has already done one and there are others around the Internet. I have read that it is “a very good kit” but I really haven’t realised HOW good it is: 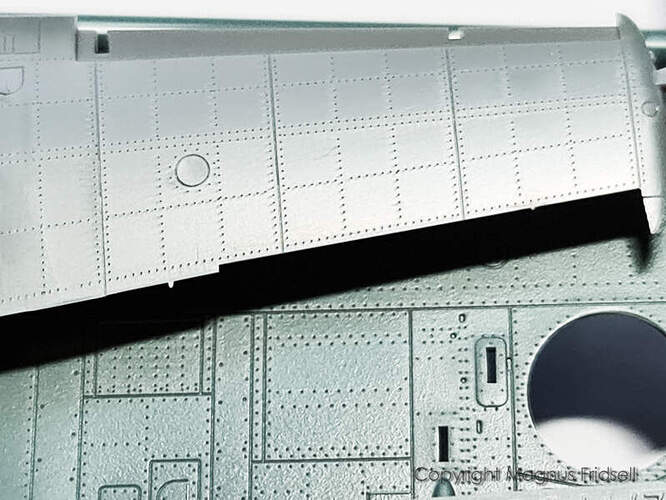 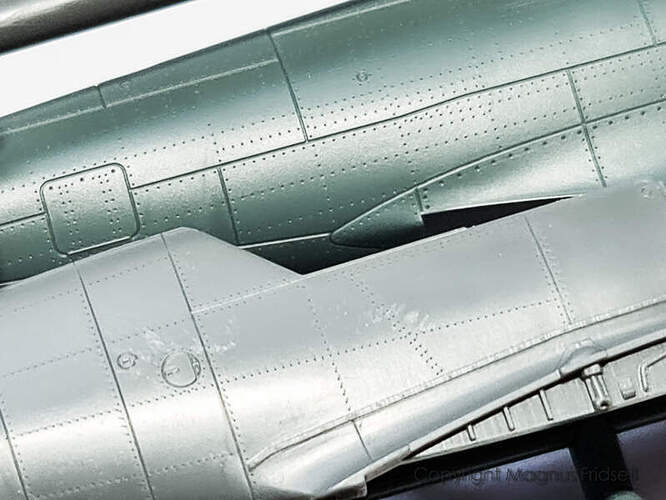 This one goes directly onto the modelling table!

Regarding that SMS: it came from a friend of mine who had found one of the kits in a local hobby shop here in Stockholm and sent it to me

! I realised that it was a bit too good to be true but had quite a hard time figuring out which one of my modelling friends was the “culprit”!

I’m glad you’ve finally got your hands on one of these little beauties! Enjoy!

Friends! Not much done during March but now finally things are on the move again! 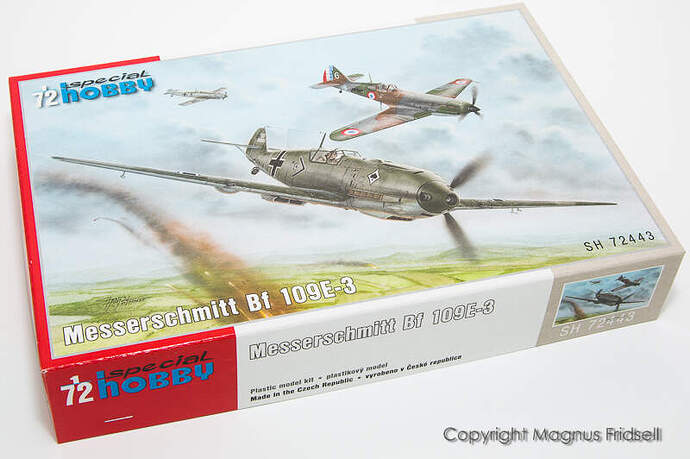 800×533 50.7 KB
To make things a bit more complicated I’ve gotten myself another 109, this is the E-3 boxing. An E-3 can be built from the E-4 since that kit contains both types of canopies while the E-3 kit only contains the earlier rounded one. Apart from that, the plastic is the same! 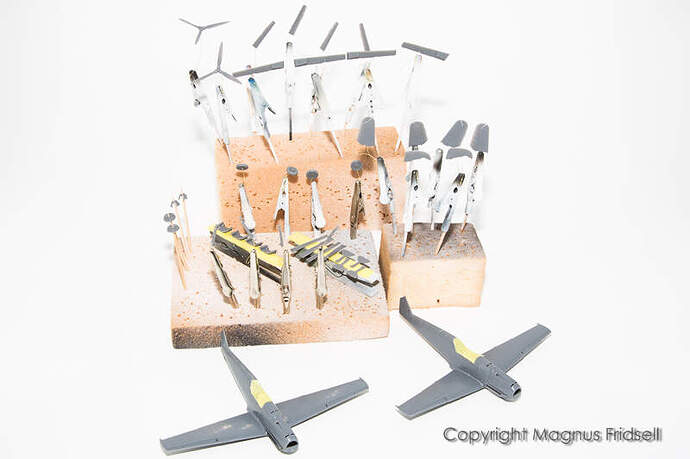 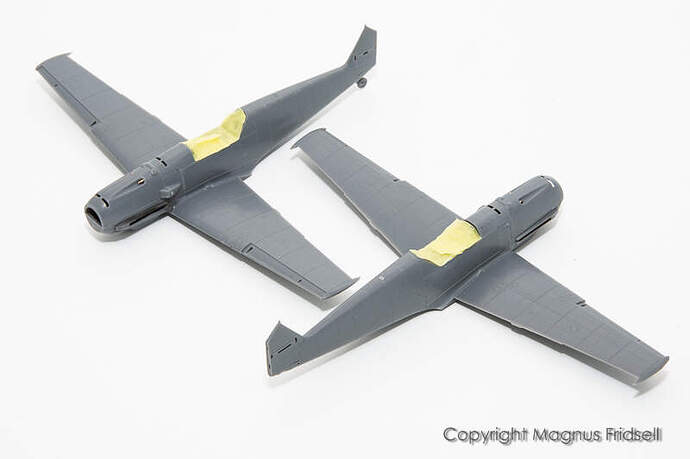 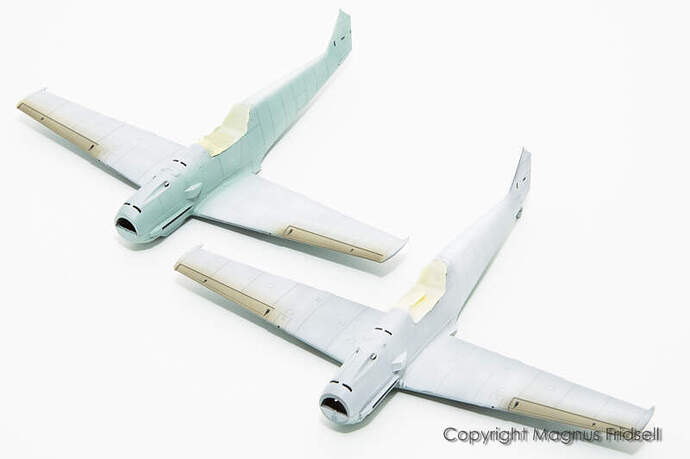 When it comes to paint schemes, I have had a hard time deciding which ones to do. After much deliberation, I’ve probably settled for the box art alternatives in both cases.

I like the clean look of the E-4 with the light blue fuselage sides, the “hellhound” badge is cool and then there are the yellow wing- stabiliser- and fin tips to further liven things up.

Regarding the E-3, I’ll go for Werner Mölders aircraft. It is a bit oddly painted, I think it was an “all green” RLM 70/71/65 machine from the beginning where RLM 02 was used to lighten it. We’ll what it looks like! This was the machine that Werner Mölders was shot down in to become a French POW for a few weeks in May-June 1940, I am almost sure this is what is shown on the box art.

! They are sharp as needles and very thin so they will snag just about anything and break off. I found mine though and glued it back

It great to see you well underway on your Emils after you waited so long to get one.

I still remember my total bewilderment when I looked at my kit during the build and realised one of the wing tips was missing. I hadn’t noticed it get broken, so I was in a panic, thinking “How can I have reviewed the kit and not noticed a short-shot.” The first thing I did was to check the review photos to be sure it was there in the first place.

Magnus! This one nearly snuck under the radar but I found the thread and here I am watching you apply your skills to this wonderful kit!

I am somewhat jealous though, given that I am seeing blogs pop up on the internet of this kit being built (Rowan’s great effort comes to mind) and yet the kit is still not available down under

… and continue to work on emptying the stash

Depending on how large one’s stash is, this intension can take 2 lifetimes …

I’ll be watching this one come together Magnus. Although 1/72 scale is a bit small for my taste, I do enjoy and admire these small builds. Looking forward to more…