Are the Challenger 1's drop tanks endemic to Desert Storm?

Looking at the relatively small number of pictures and walkarounds, it’s hard to tell. Almost all the walkarounds except one, and seemingly all the model kits have the drop tanks (i.e. the barrel ones) insitu.

Only the one walkaround (on Prime Portal) appears to have racks for jerry cans (etc) instead of the drop tanks on the back.

Conversely, of the limited number of technical drawings I’ve found, they all seem to lack the drop tanks. (I’ve thus had to do a bit of judging by eye…!)

So it’s unclear to me whether the drop tanks are as one site aeemed to imply, something that was added during (and presumably retained after?) Desert Storm, or whether this is a Mark 1 to Mark 3 difference, or whether it was always an either/or case and just what was around at the place of deployment.

(I figure the latter being a possibilty, since when doing the FV432 I couldn’t find a reference for the roof stowage box always shown on the command variant, and when I asked my Dad’s mate (a former REME), he said “nah, we just made them up from what was available…”)

Can anybody shed any light on this?

Initially they were added as Battlefield upgrades along with the extra side and front armour. The fuel tanks were already under review before Op Granby and ODS probably just hastened their fitting. Not specifically drop tanks, just classed as external tanks for longer endurance between replens. I would say that from ODS, nearly all Chall 1 were retro fitted to have external tanks fitted, but some did escape, probably a handful.

Hi!
From my memory, the drums on Challenger 1 were first tested on one vehice only around 1986/87. Later on, at least a squadron of 17/21L had them during one of the large autumn exercises, possiby 1988/89. Hoewver, that was not the final version that came to the Gulf theatre as a kit to fit in the field. Regarding Op Grandby, I recall it like Johnny already wrote.

Regarding the stowage on FV432, nearly every vehicle had its own style of basket. When I visited a tank regiment, they said they had a welding shop which constructs these from profiles and diamond mesh. The basked which is included in the Takom kit came not ealier than in the 2000s. As far as I know it came together with an upgrade programm to FV432 series.

Cheers. Thanks, I was half right! So with that and looking at Wiki, the only time the Challanger 1 would have been in a combat environment without them would be in the first few years (so from a wargaming perspective, you’d be looking at alternate history land war in the early 1980s - not likely a high demand, one feels).

Un-upgraded Mark Is maybe? It’s often not very clear what the differences between them were (from a modelling perspective of what visible exterior differences there were) - especially given the upgrades and relatively small number of walkarounds (and only one of those with any sufficient detail) to compare.

(I’m having to work from a technical drawing of what is ostensibly a Mark 1 and the best walkarounds photos from what I suspect is a Mark 3 (most likely one at Bovington Tank Museum…!)

So, working on the 144 Scale,
Chally 1 Mk1 - nice and easy - first batch of tanks issued - No TOGS fitted ( thats why we performed very badly during the CAT competition as they were 1st gen tanks and the crews were ill prepared)

All images from online and used for reference and discussion only.
Chally 1 Mk 2- ( What I was crewed in)
TOGS now fitted. 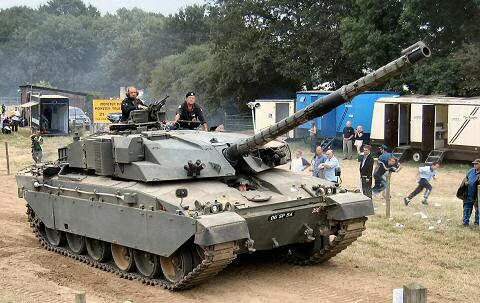 Note the wire mesh basket behind the TOGS barbette.
This link is also for a Chally1 Mk2

Here is a 22 photo walk around of the Challenger 1 in Desert Storm markings at Bovington.

On all Mks of Chally 1 disregard the bins or baskets fitted to the LH of the turret. These were unit mods and all varied between units and sometimes Sqns within a Regt.
As Andreas pointed out, a small number of Chally 1s before ODS/Op Granby field trailed the external fuel tanks, these are still Mk2s.

Chally1 Mk3.
Main difference now is the fitting of the external fuel tanks and new up armoured side skirts and new armour pack for the front of the hull. Just be aware though, these are normally fitted only for Ops, especially the up armoured side skirts - in barracks they would revert back to normal ones.
Chally 1 Mk3 of the RSDGs on ODS. Note the full up armour package and the slightly different Commanders bin (with 40 on it) which some had fitted behind the TOGS barbette. Not all Mk3s had this bin. This would of had external tanks fitted. 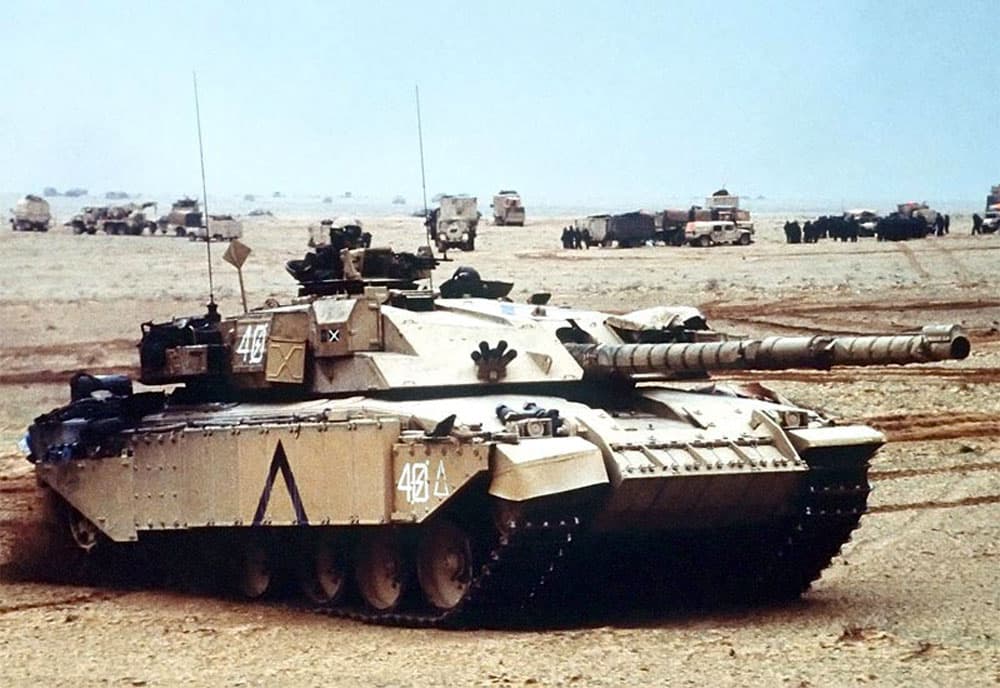 Another Mk3 but without the Up Armoured side skirts 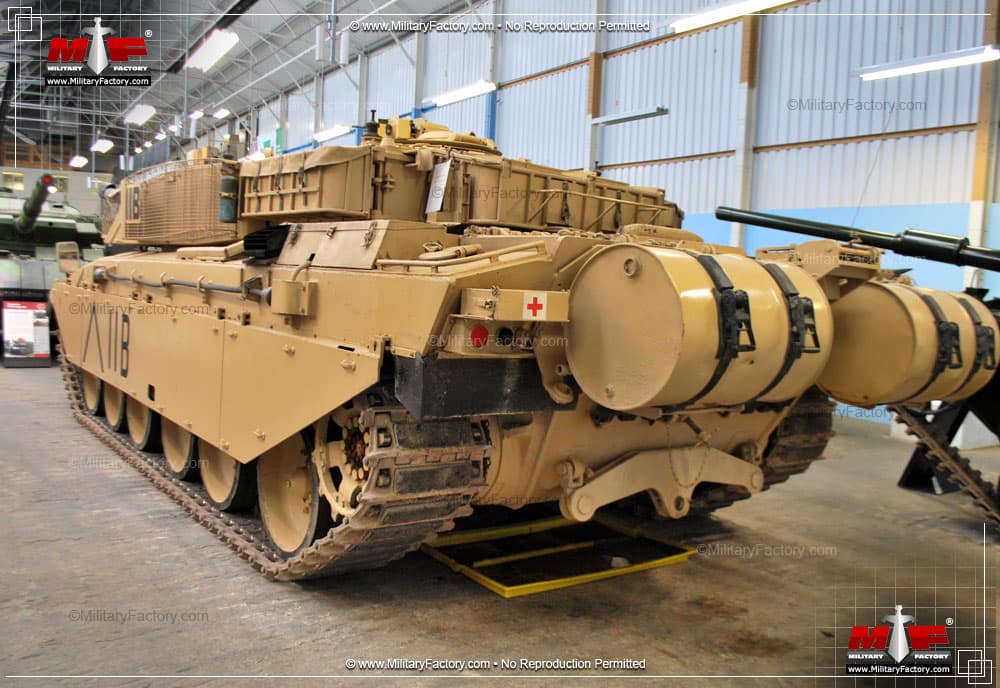 Some late Mk3s also had a series of extra fitted metal strips and bolts for attachments to the turret, but not all of them, and at 144 scale, you wont see them.

Some Chally 1 Mk2s were never deployed to ODS or the Balkans as IFOR/SFOR so would of escaped the external fuel tank retro fit. As an example, the Life Guards while in germany only deployed one Sqn to ODS and the vast majority of their Chally 1s stayed as Mk2s. Hope that helps.

It is very helpful, thanks!

So this (taken from that Prime Portal walkaround - that also being the only one I saw without the extra fuel tanks - :

is the TOGS Barbette, yes?

What was there before, if anything? (Was there even the indentation it sits on?) I ask, since even the technical drawing which claims to be a Mark 1 appears to have a box or something there, though it might not quite be the same shape and my image searches don’t seem to have found one without the TOGS (though in fairness I have not made an exhaustive effort today, I’ll try that when I pick work back up again next week.)

I did manage yesterday to get the rest of the hull done (doing my best by-eye implementation of the extra armour!) and started on the turret (FRACK that’s hard going, its such a complex, generally assymmetic shape. Though I think the Mercava IV is still worse…), so it’s very useful to know the commander’s bin is different, and especially about the LHS bins! I may or may not put any on, we’ll see, but at least if I do, I am now informed and can explain, if anyone asks “well…!”

Yes that is the barbette for the TOGs.

They all came with the barbette fitted. There was a technical delay in the TOGs rollout . Any tanks from the initial batch without TOGs simply got it retro fitted once it was ready for issue .

just to add, the commanders bin that Johnnych01 pointed out on 40,
were commandeered from ferret scout cars,
the bin that is on the other side of the wheel position, with the outside edge fixed to the challenger, and were the escape hatch was, facing out, 40 written on it.

the hidden item that makes them Mk3s, were the charge bins inside being metal armoured not the plastic/glycol ones.

Hah! Thats’ particulalry useful to know, since I did the Ferret not long ago!

(I actually managed to take a few photos of a couple myself for that one.)

Some in ?FOR had the one end of the drums cut off and used as stowage with a section of canvas on one end a lid. 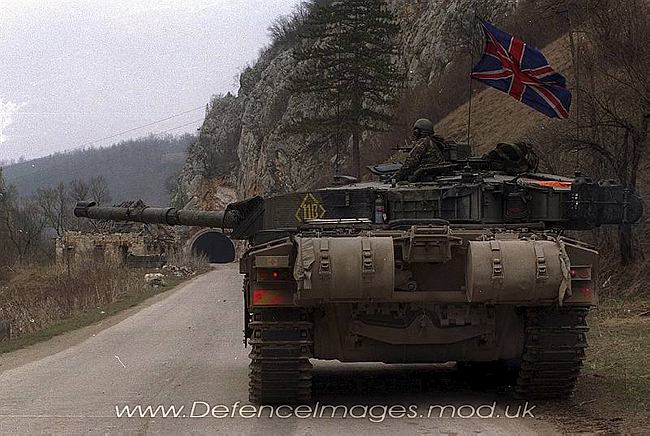 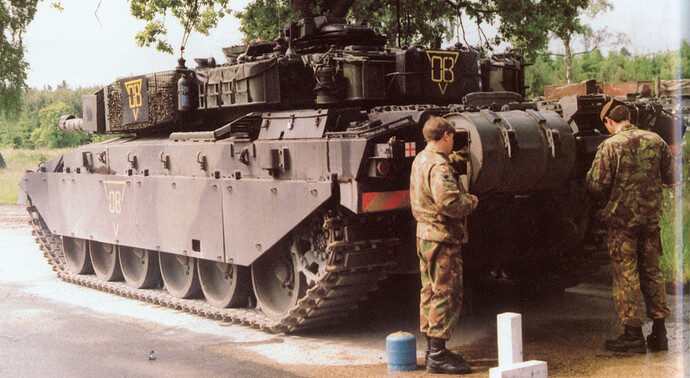