Hey ! A new diorama from me.
I have been working on this for a couple of weeks now and it’s time to present the idea and see what you think. The story is a group of officers, drivers and soldiers arguing about which way to go.

Looking like a good start so far. Positions look good and it’s the sort of scene you’d easily expect to see. To add to the confusion, I would probably make the road into a staggered T junction with them not sure if they need to turn right or carry on straight … Just a thought. It’s looking great exactly as it is

Edit. But on looking at the pencil lines you’ve drawn, you may already be doing that… So forget what I said

Thanks Jonny! yes the line was thin but I plan to do two roads with figure pointing in different direction.
The roads should be a bit muddy

First of all, it’s nice to see you building again Micke!
Great start as the others already have said!
I am reading a lot about how to make great storytelling with dioramas. If I would suggest something, from what I have learned recently, it’s to guide the viewers eyes directly to the story.

Picture bellow:
Red circle: Main character’s position.
White circle: Eye catching object, the big white map.
Two red rectangles: Two groups of soldiers who also are looking at the map. Or at least in that direction.
I think almost all figures in this diorama should interact with the figures in the center looking at the map. That is a clear storytelling for me.

The soldiers don’t have to argue, they could just have a discussion. If you want them to argue, it’s important that their faces and body expressions really tell the viewers that. Maybe two officers could look like they are fighting? But it’s easier just to let them having a discussion.

I think you should avoid to have different groups of soldiers just standing and talking to each other without interacting with the officers in the center.

Well, this is my thoughts. /Erik 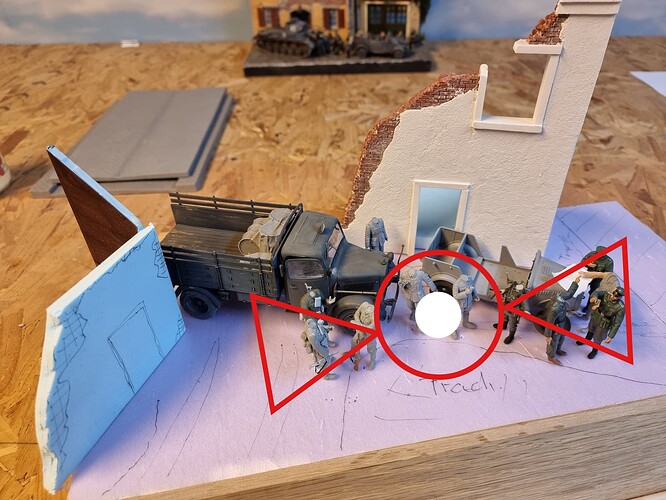 PS I highly recommend this book! It’s my new favorite. 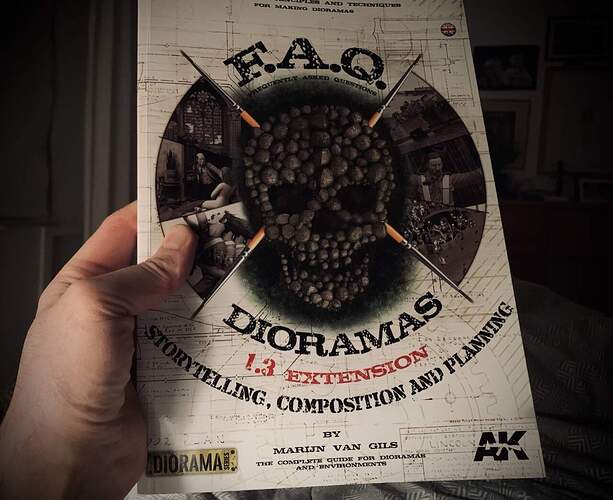 think you should avoid to have different groups of soldiers just standing and talking to each other without interacting with the officers in the center.

But it wouldn’t be unusual that while the officers have a discussion, others have a smoke and talk about something else, probably mocking those officers that don’t know how to read a map…

That was my basic plan, but as Erik says, the map and officers should probably be more in the middle (I’m not sure)

The thing is that you should do it your way.
My suggestions is just from the point of view of what I learn from the professional builders who win gold medals at competitions.
Honestly there is backsides with that type of dioramas, you are forced to think in a special way. And that’s of course not what everyone wants to do.

For example my camouflage uniforms in the Fritz diorama was too realistic, they didn’t “pop out” etc etc.

My thought was like this: IF there really is two or more officers arguing and speaking/shouting loud, the soldiers nearby would probably react and look in that direction?

The map don’t necessary have to be on a car, someone could just hold it in his hand.
/Erik

Thank you Erik, I will first try to make a small foundation with rubble and burnt wood

Now I have changed the position of the figures so that the scene is more together and more in the middle so I hope it creates more interest in the diorama.
What do you think ?

Hi Micke, personally I like the new setup a lot.
It’s always tricky to place vehicle in the opposite direction to each other, at least if they are from the same army, normally the all go in the same direction. But I think it works in your diorama if the thought is that they have just meet each other. And both think the other one is in the wrong way.
One thing, the pointing figure in the circle, maybe it’s better to place him at one of the “X” instead?
Right now I can’t see that he interacts with someone?
/Erik 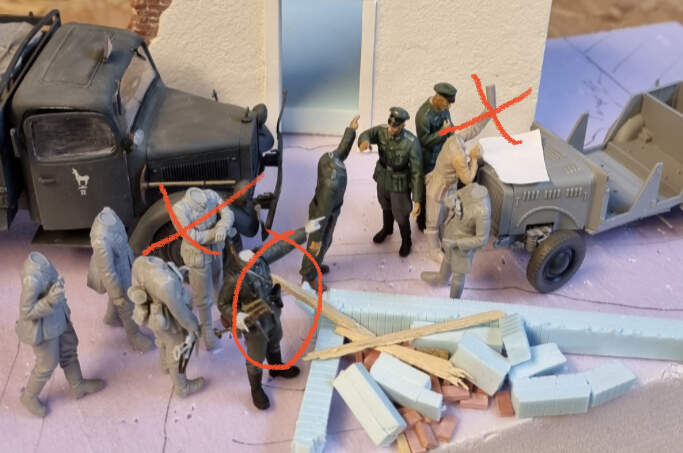 And I agree about that pointing guy, I prefer the right side cross…

Just to chip in as well Micke, I agree with both Erik and Bert, the guy pointing would look better interacting with the other guy pointing as they both point in opposite directions and maybe positioned closer to the map readers ?.. Great idea and it has just the right amount of figures to make it busy, but not overly complex…
The buildings will bring it all together… Would be great if you could try and get a house or building owner looking out from a window laughing …great work so far

Thank you very much I am really happy for your feedback and I agree that the figure should be moved. Now I will try to stick to this setup

One detail that you probably already have thought of, is the direction of the front wheels.
The small vehicle should have the front wheels turned to the other side. /Erik
PS Enjoy painting the eyes and lips:) 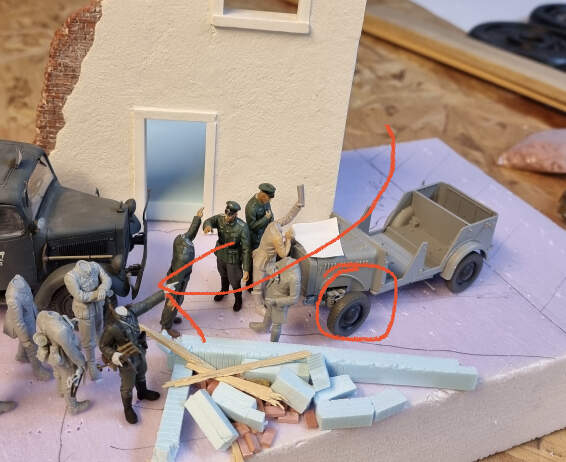 Send them to Erik @DIOWORK … He is great at them

Erik! Sharp eyes you have.
Yes, the wheels are only loosely fitted, but unfortunately the wheels cannot be turned so I have to try to solve it with a saw and a hammer.

Johnny! If I let Erik paint the figures, the rest of the diorama will look like disaster.

Come on Micke! Give it a try, once you have painted 2-3 of them it will be better and better. Start to paint the figures that will be in the back and not have so much focus from the viewers. /Erik