I was looking through some old scrapbooks for some photos of a truck I drove while in the army. I was planning on modeling it. I was assigned to Service Battery, 2nd Battalion 12th FA from 1976-78.Finding the photos, I see our bumper code was FRC 2F12. This was at Ft.Sill, OK and we were part of III Corps artillery. I can’t figure out what FRC stood for. Never worried about things like that at 18. I found an Army Reg. on authorized abbreviations and acronyms and they have FRC as Federal Records Center. That would make no sense to me for a combat unit. I know there are a lot of old Redlegs on this site, maybe someone can shed some light on this. Thanks.

FRC is Forces Command or FORSCOM which was the major command for many Army units in the US. It was the main unit over III Corps. For more information, you can go here: United States Army Forces Command - Wikipedia
Ken.

Thanks a lot Ken. 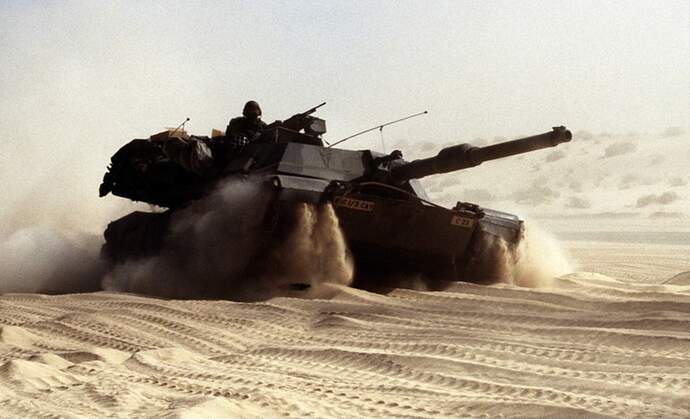 Carlos, ref the above … is the C23 simply call sign 23 from Charlie Sqn/Coy ?

Here is an M1A1 from 3rd ACR during Desert Shield.

Thats one of my tanks. Note the emblem on the turret - we were known as “Cyclone” Troop and we had a tornado painted on it.
Ken.

C troop, 2nd Platoon, 3rd vehicle (tank).
In a US Cavalry Regiment, a Battalion sized unit is a Squadron, and the Company sized unit is a Troop. Platoons and sections remained the same.
Ken.

That is the actual bumper number for the vehicle. Like Gino said, 2nd platoon, 3rd vehicle. But being part of a Cav unit, it should be C troop, not C company. Last I knew, the Cav still used troops instead of companies, and squadron instead of battalion. Other markings on the sides will usually indicate company or troop, and platoon. The old geometric shapes: triangle, square, or circle, with a two digit number used to serve the same purpose

Like Gino said, 2nd platoon, 3rd vehicle. But being part of a Cav unit, it should be C troop, not C company.

Yup, I noticed my mistake after typing and went back and corrected it.

Another difference in an Armored Cavalry Regiment (ACR) compared to an Armor Battalion is the troop make up. An Armor Company has three tank platoons, plus a Headquarters section. An ACR Troop had two Scout Platoons (M3 Bradleys) and two tank platoons, plus a Mortar section (two M106 Mortar Carriers) and a Headquarters section which include a Tactical Operations Center (TOC) an M577.
Ken.

Thanks for that Ken. I was always curious as to the TO& E of a Cav Squadron. Now is this for a Divisional Cav Troop or for an ACR Cav Troop? I know that the ACRs letter their troops in sequence like combat arms regiments used to do until the 60’s.

This was for an ACR, specifically 3rd ACR. And yes, it’s sequential. 1st Squadron was A,B,C,D; 2nd Squadron E,F,G,H; and so on. They are no longer an ACR, the dropped the armor, but they still letter their units the same way.
Ken.