Well, laid down the SMS Paints version of Lusterless OD… and the colour is just too green and dark: 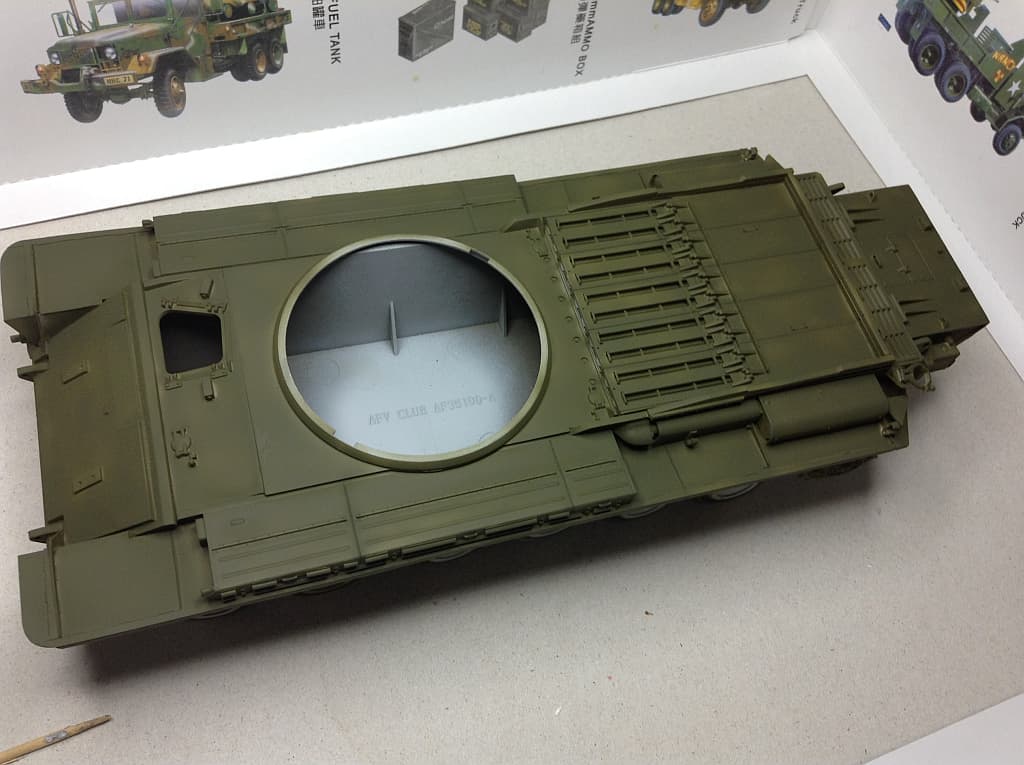 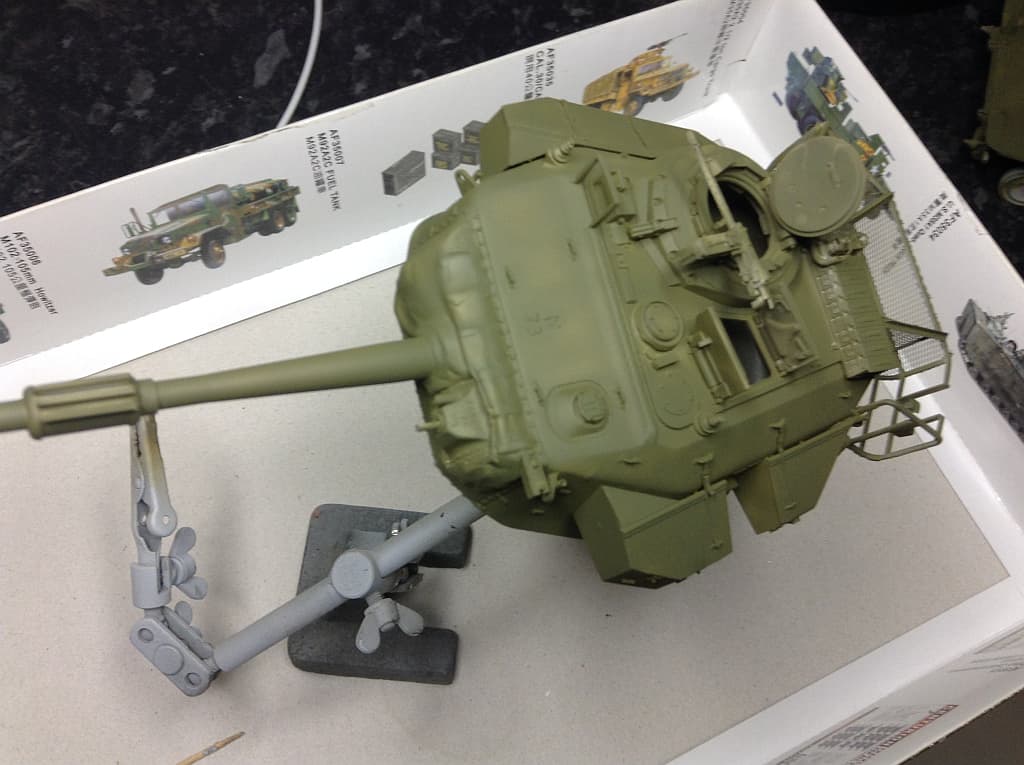 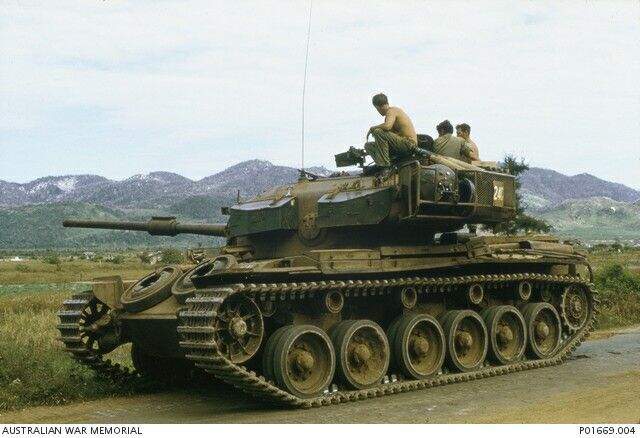 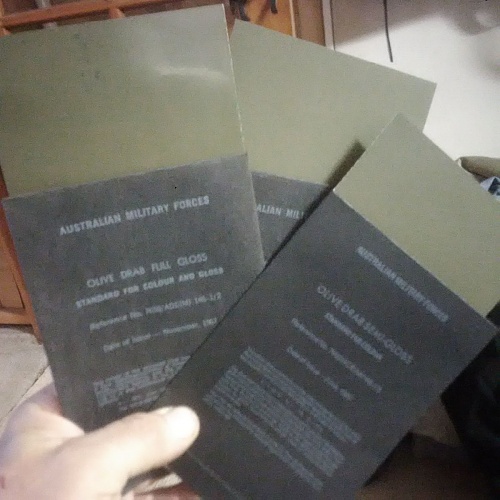 if i may offer a suggestion, military minatures in reveiw magazine issue#52 with the aussie centurion on the cover has a good build up/paint on the kit,they used vallejo paints,cant remember the colors off hand(im not home to look) but its how i did mine,when i get home i will get you the colors and some pics of mine so you can see and judge for yourself,it has the faded look to it that i see in a lot of color pics of cents. in vietnam

Tried the AK Lusterless OD from the AUSCAM set I have, and a tad too yellow green for my liking. I ended up mixing that with AK 136 Olive Drab Highlights 2:1 and got a colour I am much happier with: 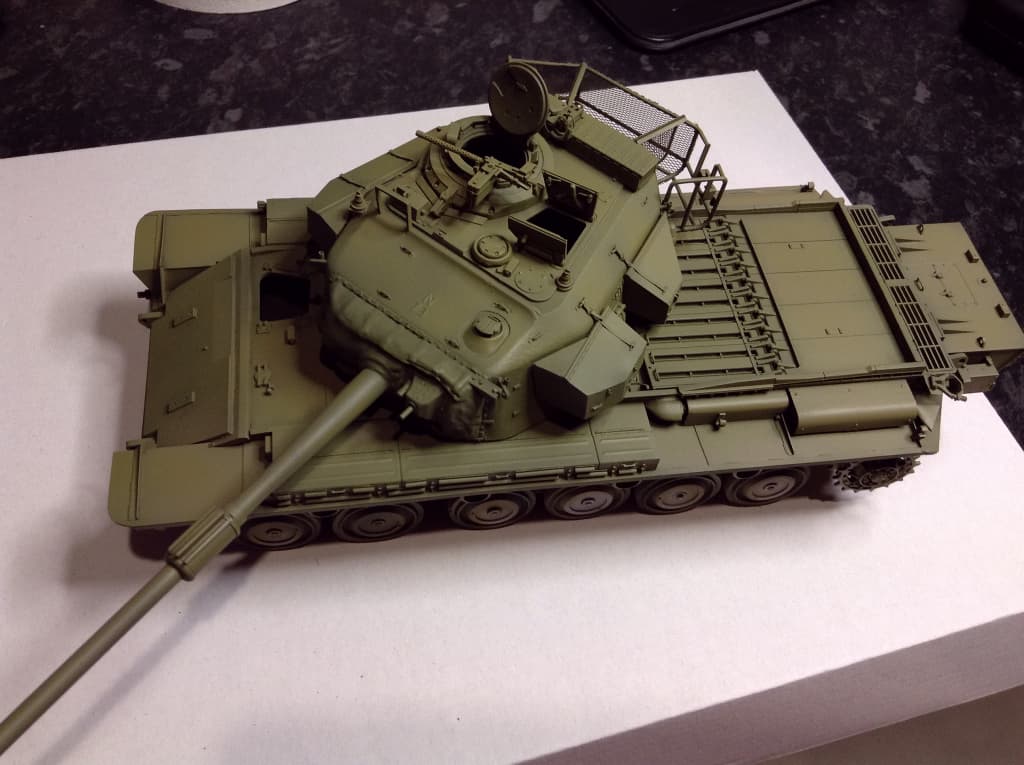 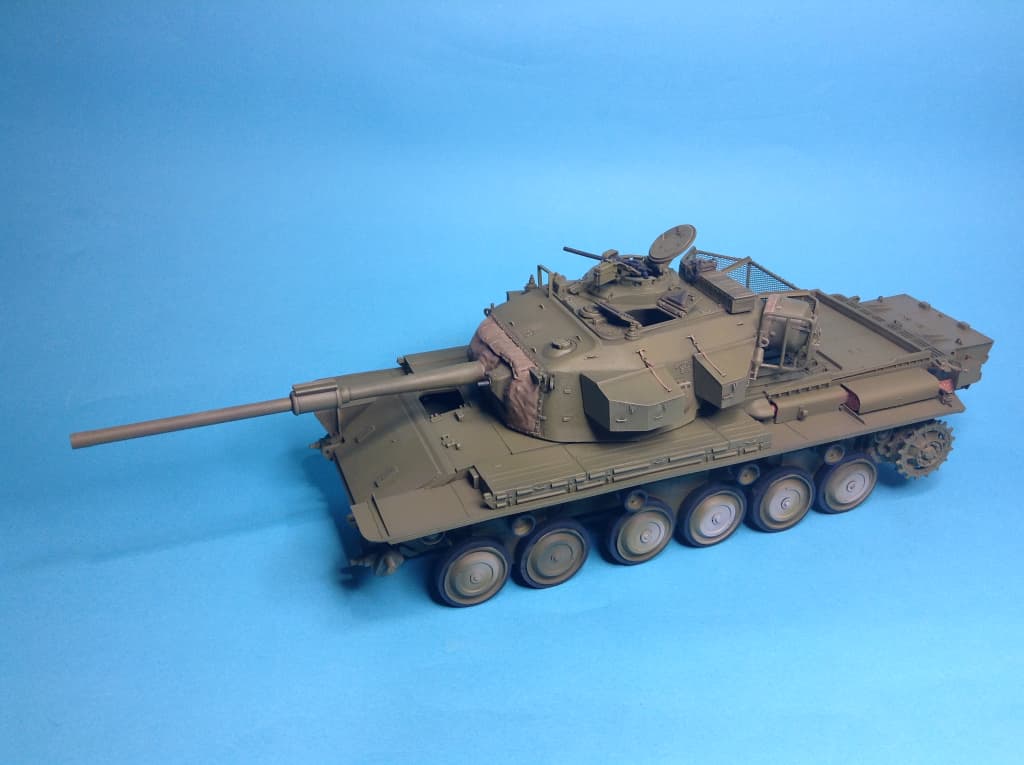 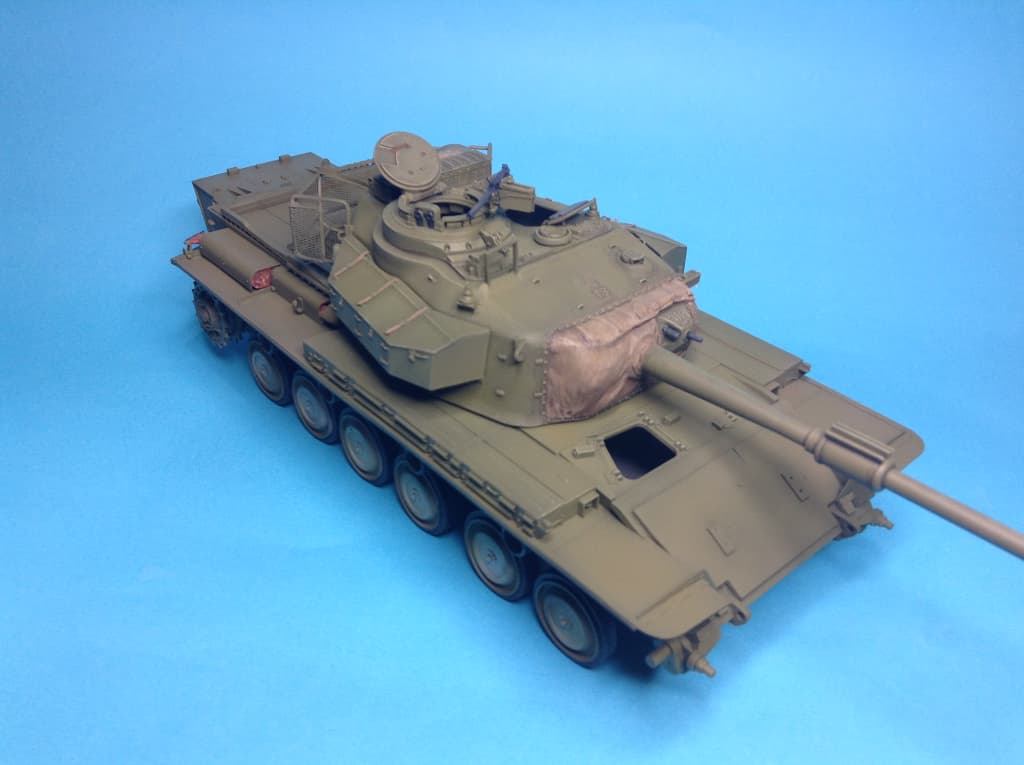 Well here it is under paint and decals with some weathering. 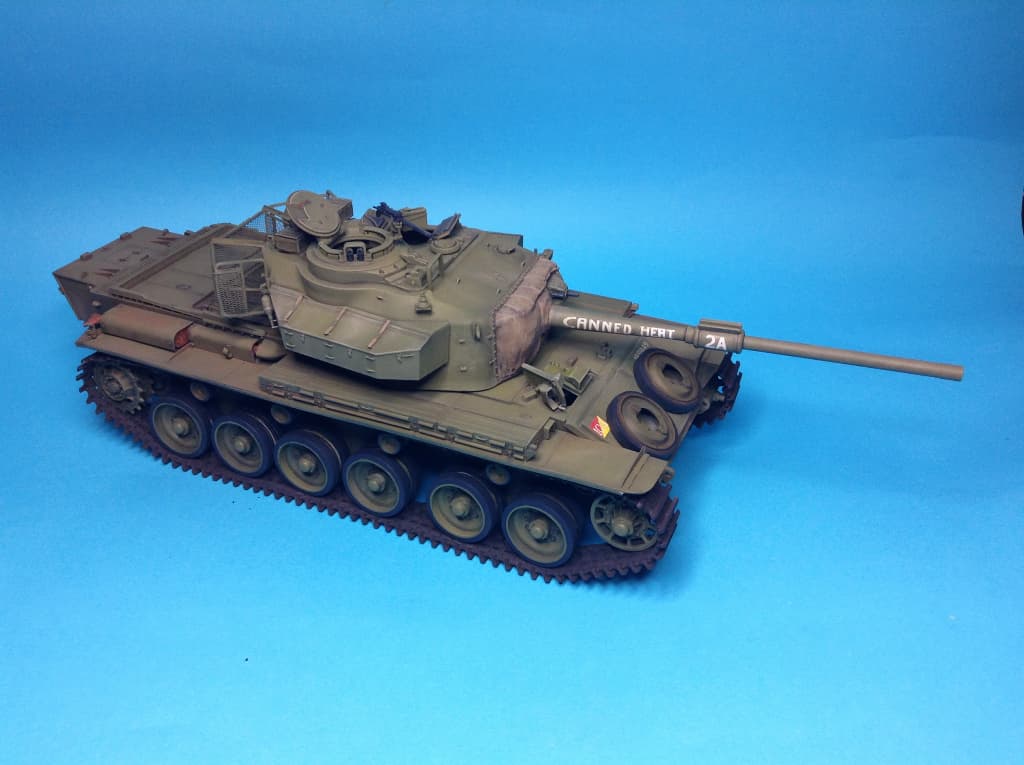 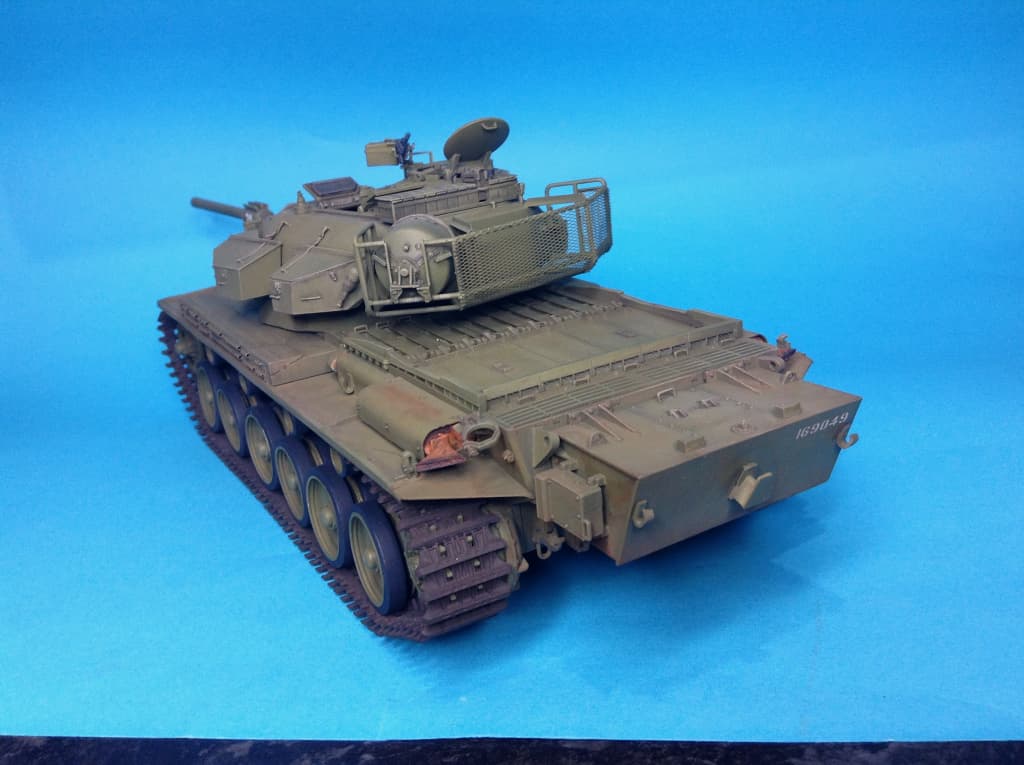 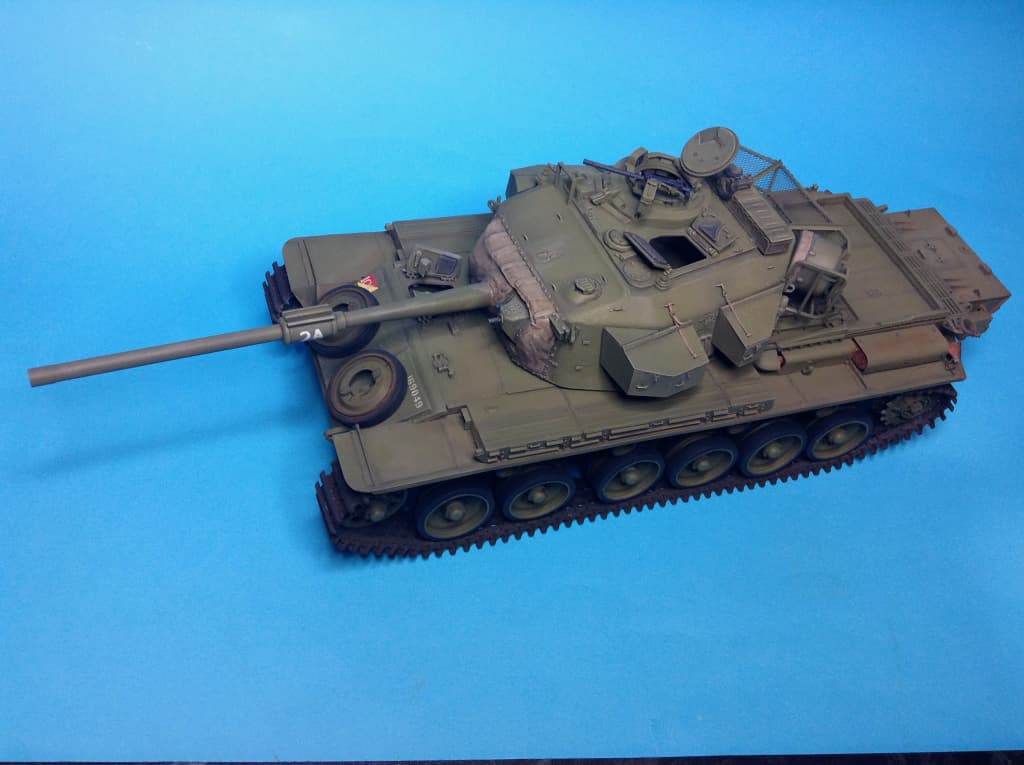 More weathering, stowage and figures yet to come.

A bit more info on the kit decals. As I have stated before, the kit decals bar one, cannot be used with the vehicle as depicted in the kit. However, there are more issues with decals than that.

These are the kit decals. Hard to photograph clearly, but you will get the drift anyway: 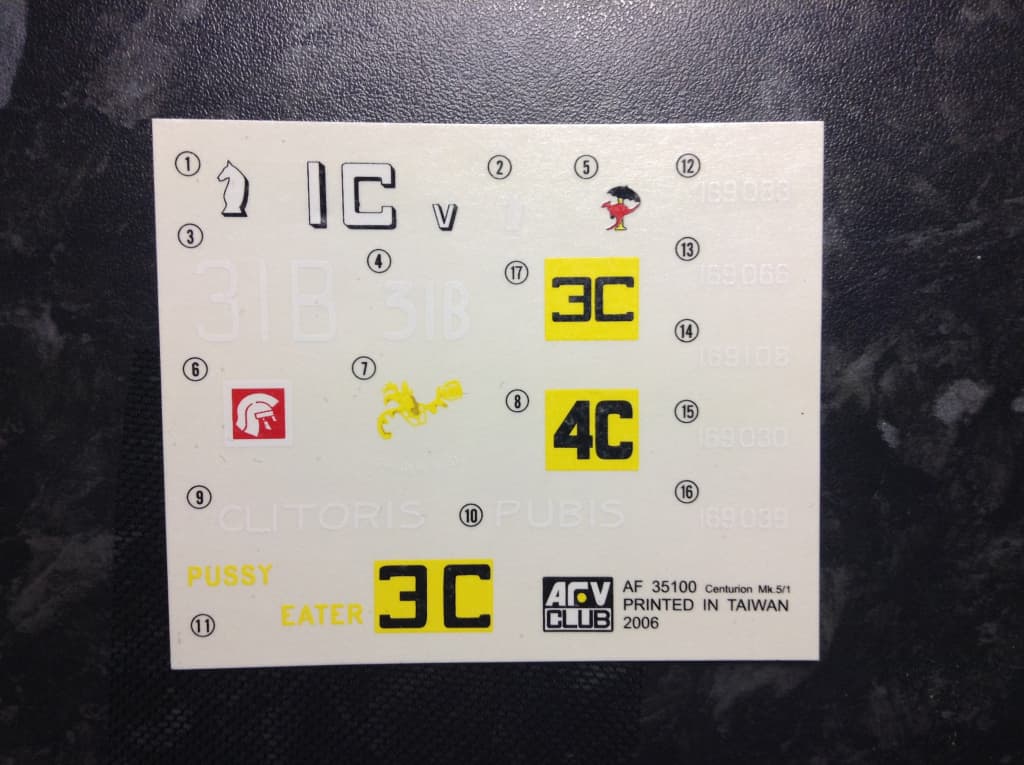 One of the kit options is Option B, for "The Very Diabolical’. I have posted a photo of this vehicle above. This vehicle is well documented and is known to have a Galah cartoon on the rear fuel tank and a Centurion helmet marking. AFV Club give you both, but the helmet is white on red, not white on maroon, as it is supposed to be and is quite undersized. They also neglected to actually produce the name decal for the gun in their kit!

Option C. Call sign 1C A Squadron, 1 Armoured Regiment. AFV Club give you a Knights Chess piece with a black shadow outline. The accompanying call sign offered also has a black outline. However, other tanks in A Squadron did not have the outline: 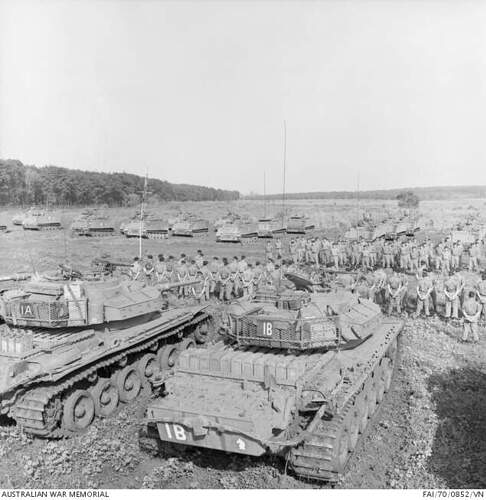 Then ‘Moggie Muncher’ (ahem) Option D in the instructions. The kit decals have the call sign on a very vivid yellow. The photo of the actual vehicle I posted above shows the yellow to have a distinct orange tinge, like Caterpiller’s yellow. Markings can be toned down of course, but the number is actually a tad too tall when placed against the model and compared to the photo.

AFV Club also give a 5th option, which they have not included in their instruction sheet. This uses decals 9, 10 and 15 in the image above. The first 2 barrel names, the latter the ARN 169030.

So, with these decals incomplete for the vehicle, coloured incorrectly, and poorly shaped, I turned to an old Mouse House set: 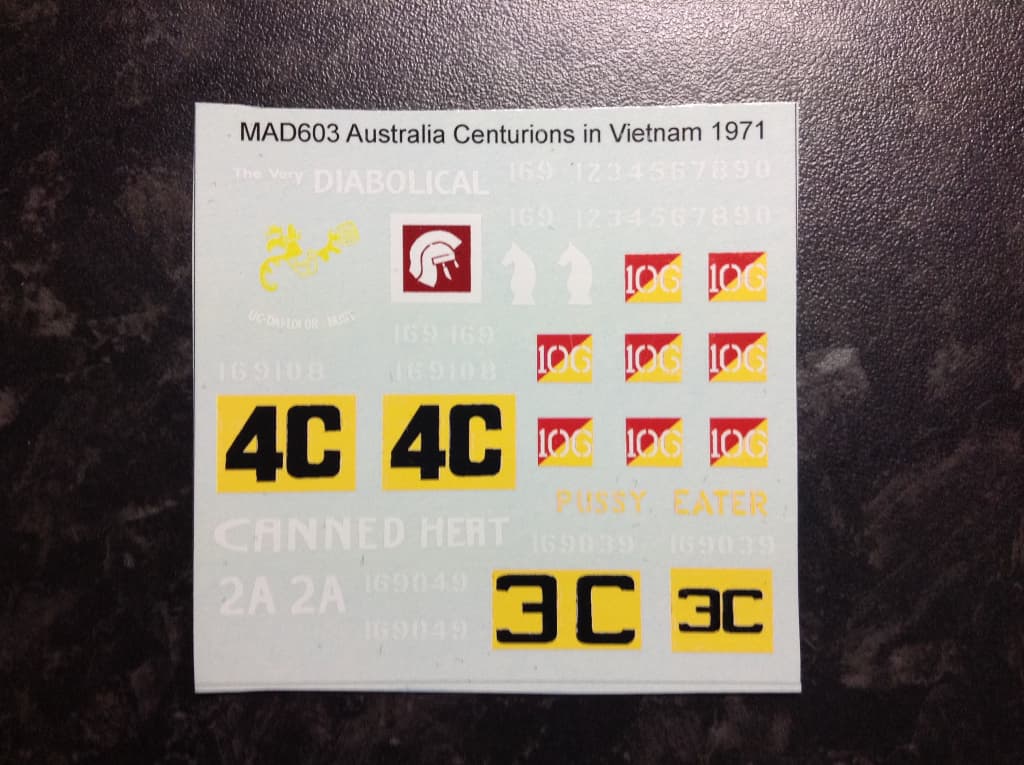 This set has complete markings for 2 of the options AFV Club state they offer, the red/yellow flashes missing on the AFV Club set as previously stated, correctly sized and coloured decals, plus a series of individual numbers to create any of the ARN the modeller would care to do.

A comparison of the sets showing the different Helmet colouring, Knights piece, single colour galah marking for ‘The Very Diabolical’ and the call signs of the correct size. 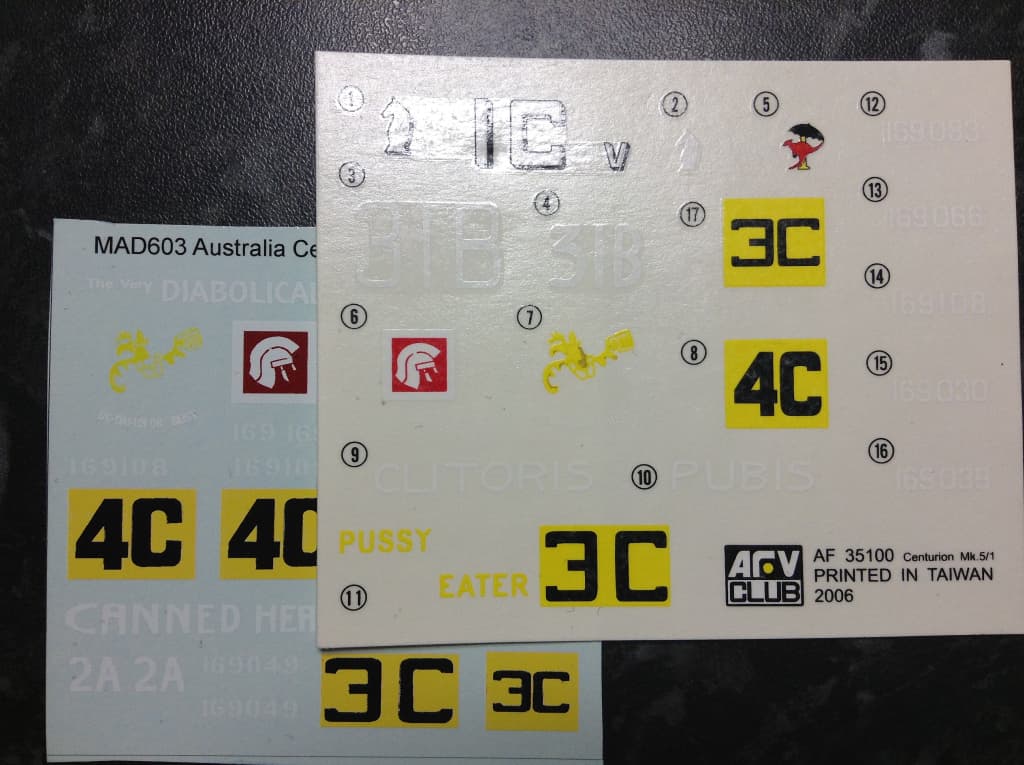 In the end, I decided to go with MH decals for ‘Canned Heat’, C squadron, 1 Armoured Regiment, 1971 Vietnam, to be different to what most modellers do and being one not offered by AFV Club. This vehicle is shown in this photo: 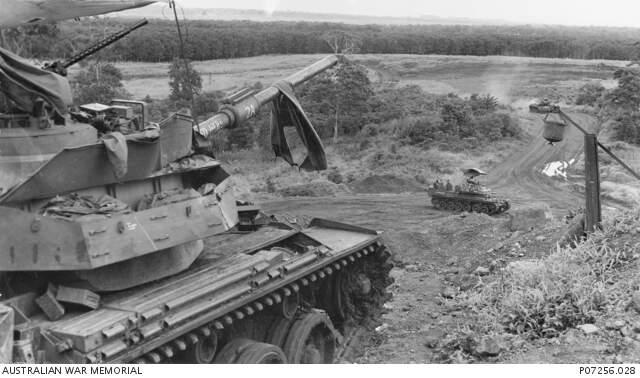 Here is the Cent basically finished except for stowage in the basket. 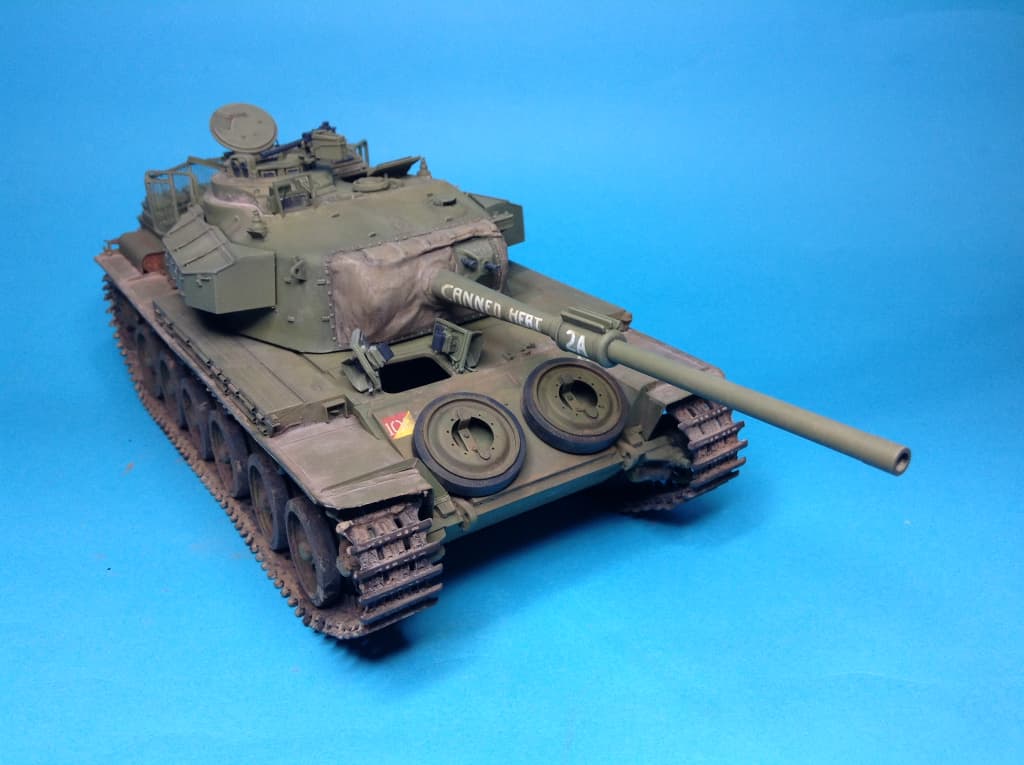 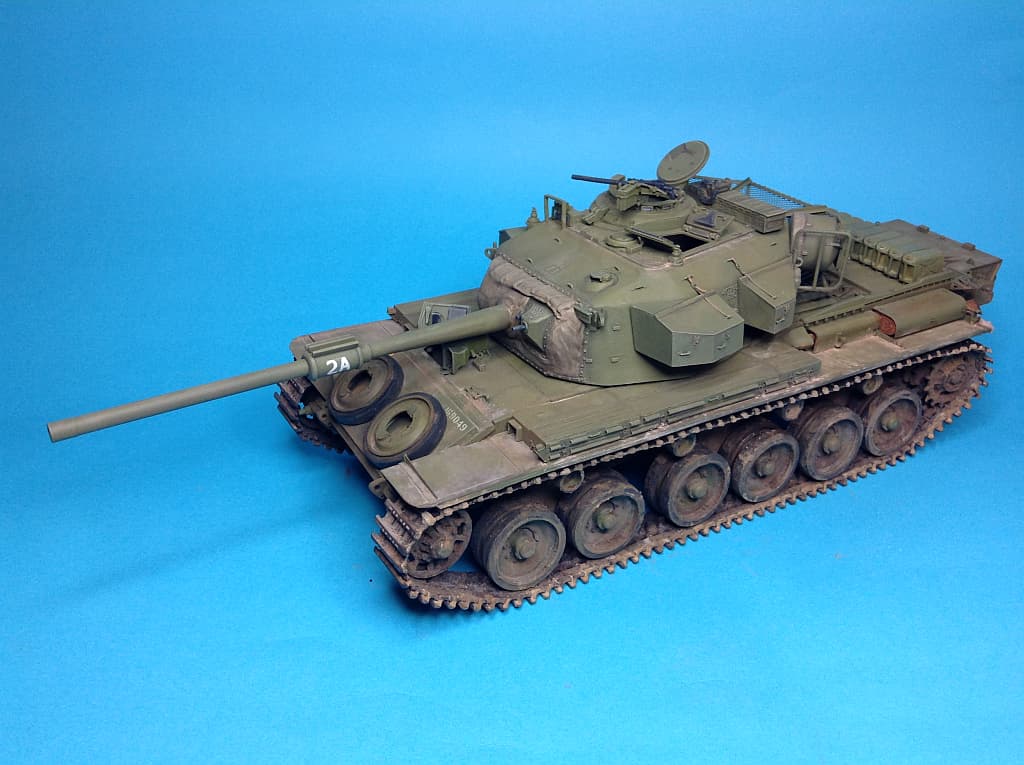 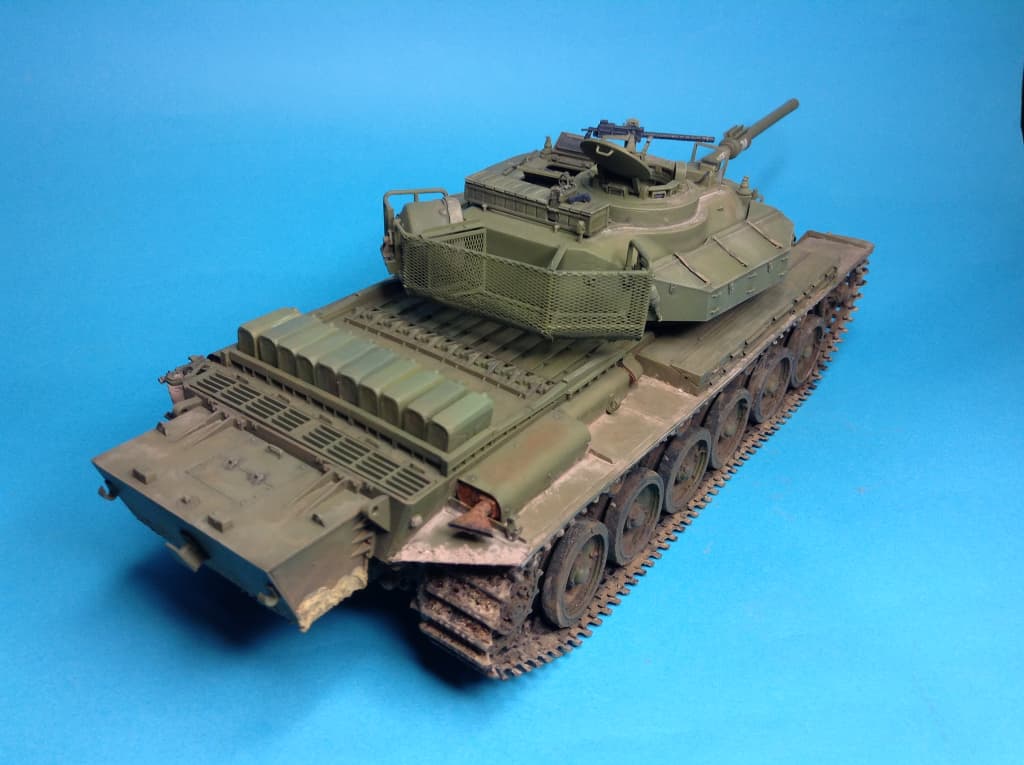 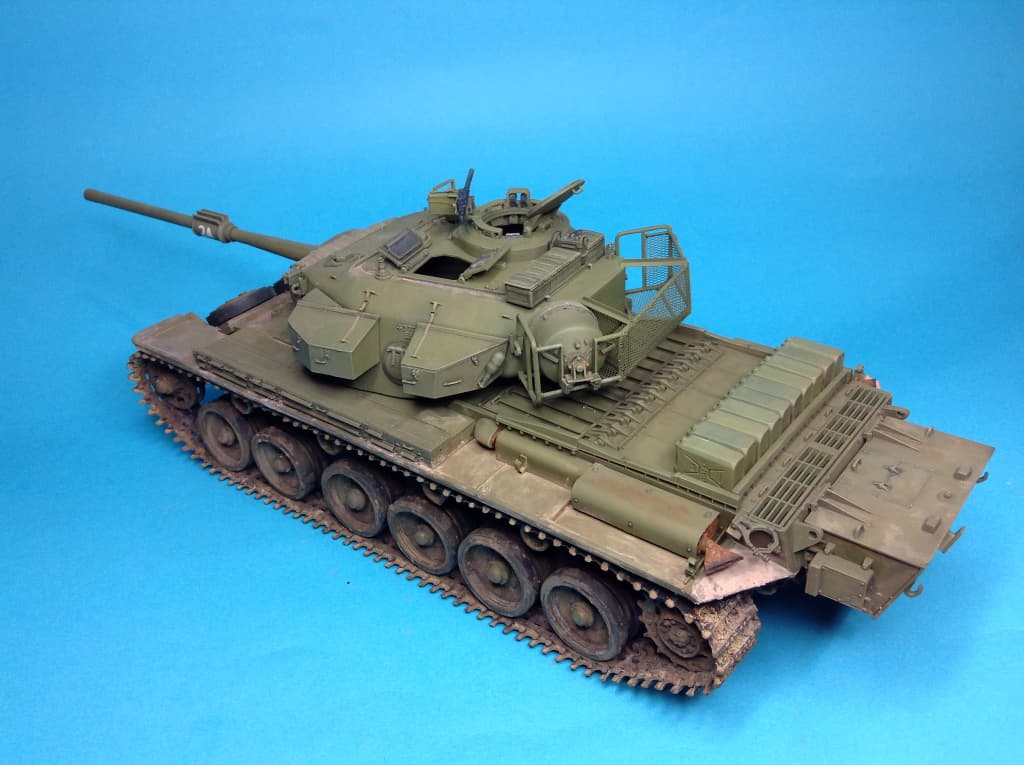 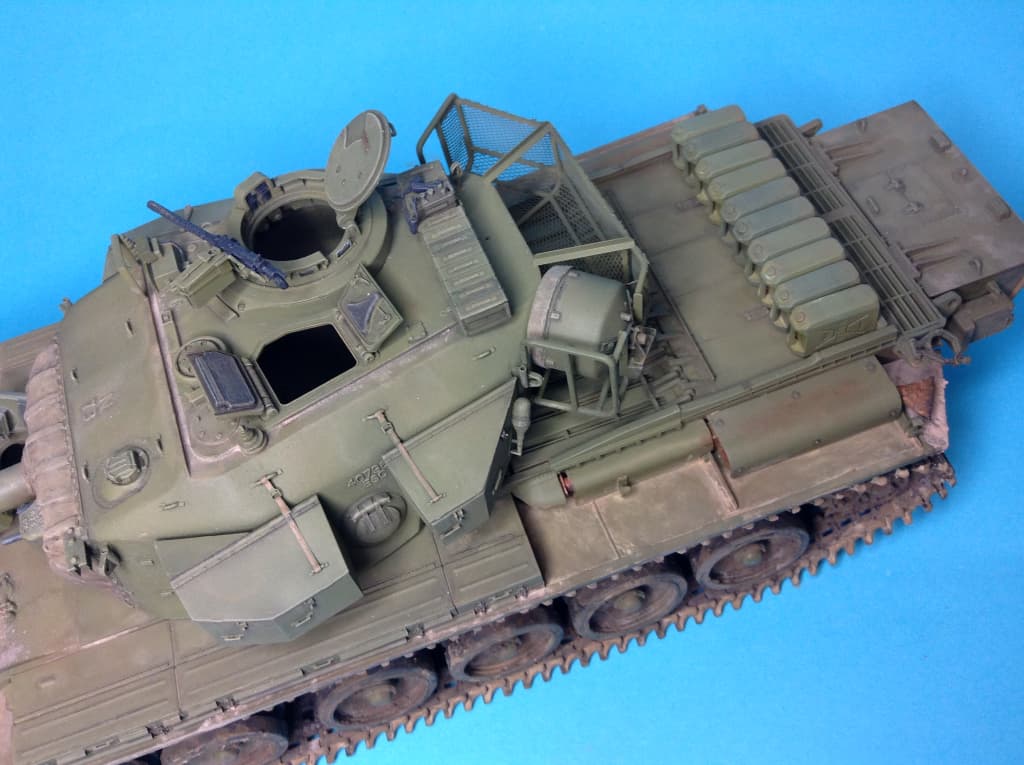 No idea why I’ve only just caught up with this but it looks superb, a lot of work fully justified