This is a model of the rather obscure Romfell armored car. Not a lot is known about it. At least one was built for sure on what is believed to be a Mercedes chassis. There are photos of what could be a possible second vehicle, or it just maybe the original body installed on a different chassis. It’s service record is also sketchy. It is known that it served in Italy and also against Russia. Though not a historically significant vehicle, it was very innovative and the body was quite futuristic looking. The kit is from Copper State Models in 1/35th scale, and goes together really well. The interior is very visible if all of the doors are left open, but the detail provided, though well done, is rather sparse. CSM does provide a line drawing which, with some scratch-building, allows you add more if you so desire. The vehicle had several fuel tanks on the side walls up against the roof. I added one that is visible up behind the driver’s seat. I also added one under the cowling against the firewall, just visible through the open doors. The model can be displayed with the hood side panels off and the engine is very complete and nicely detailed. I just added the spark plug wires. 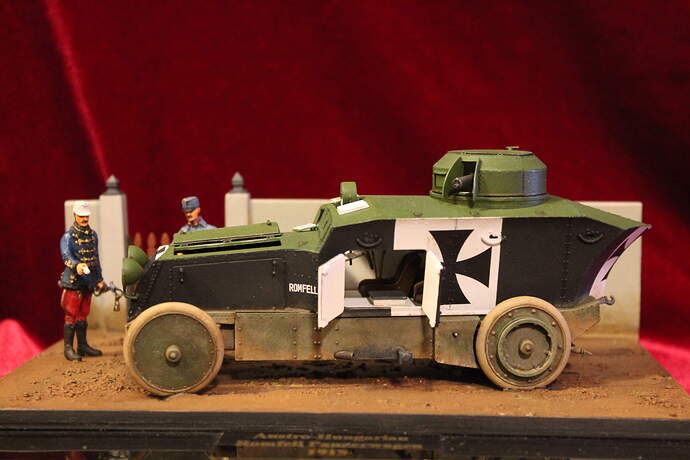 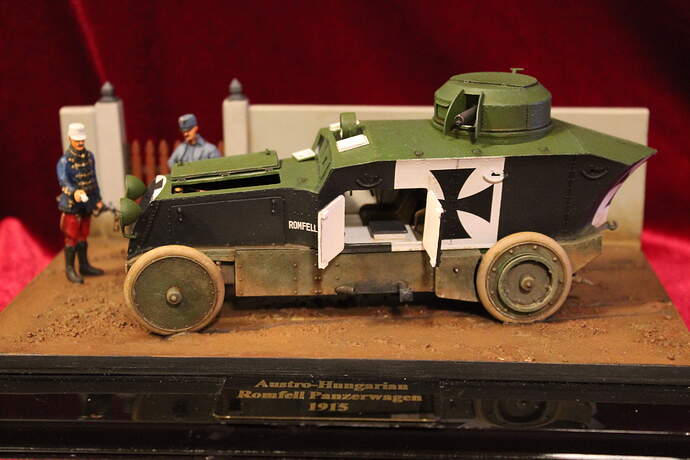 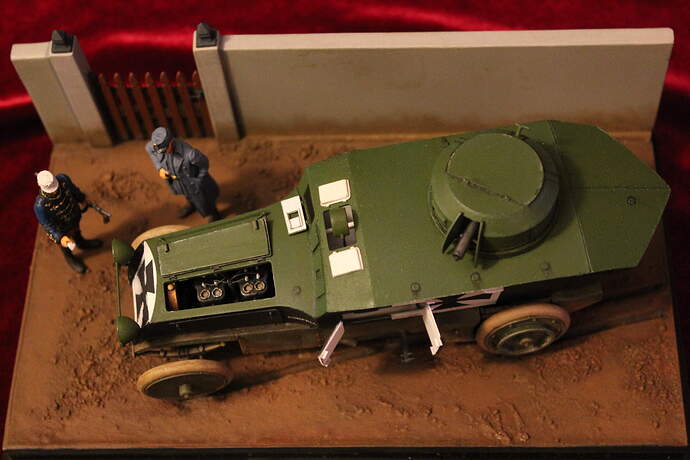 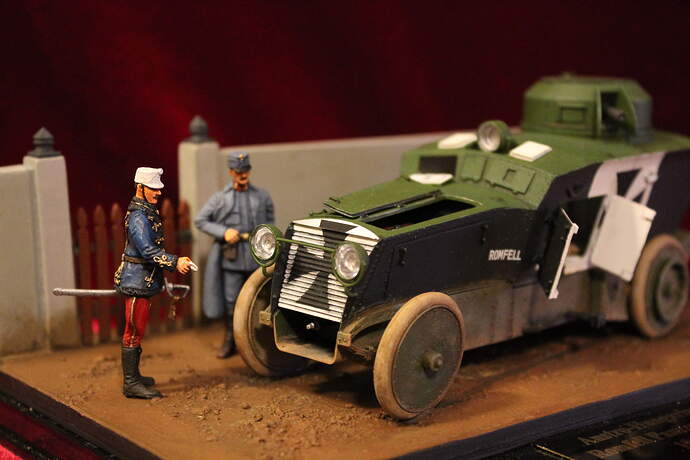 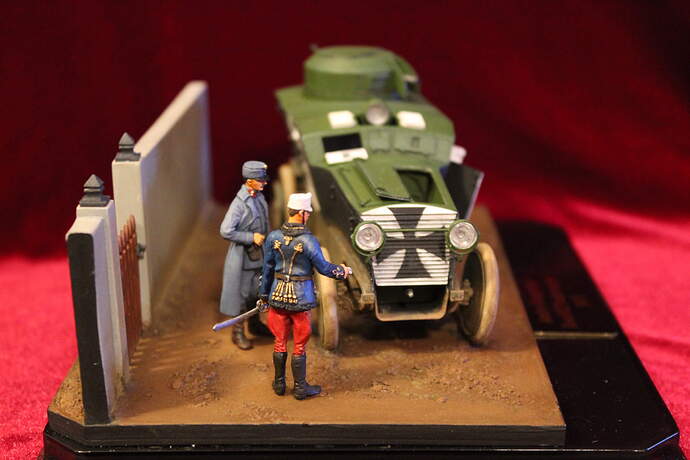 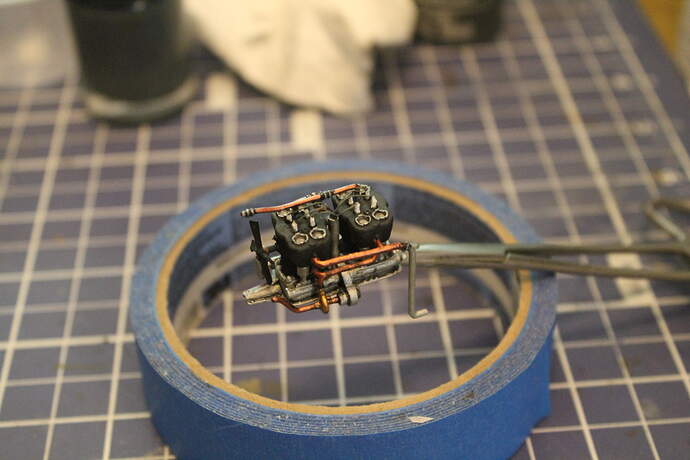 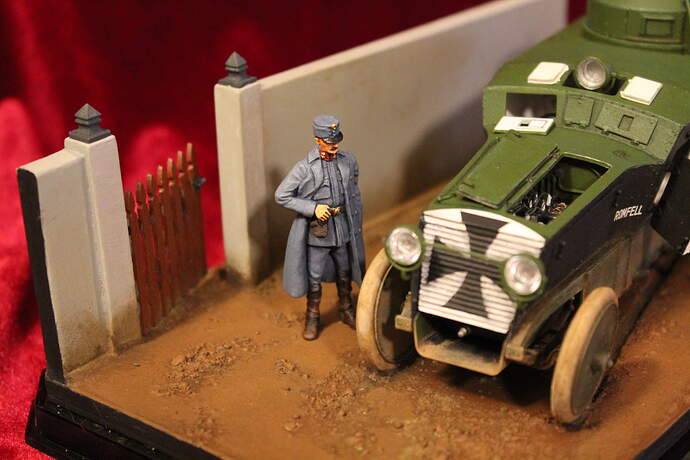 The figures are resin, from a company called ‘The Bodi’. They are available separately, or as a pair. A little clean up was required, but they went together with no putty needed. I added the straps for the Hussar’s saber. The decals were from Cartograph and settled down nicely. I did apply Solvaset to help them snuggle down over some of the details. Thanks for looking, all comments and questions are welcome.

That is a really WILD looking machine!.. Great paint job and decal work…Love the figures too.
Cheers,

Thanks, the sleek lines and the markings are what caught my eye in the first place.

Thank you. The records don’t show if the body color was actually green, it might’ve been dark gray. So you can go either way. Later on during the war, the crosses were painted out.

You don’t see one of these everyday lol- love it

This one’s high on my wish list. It looks like something Dick Dastardly would go to war in!

It definitely is different looking.

Thanks, in an on-line video, someone called it the original Batmobile, and I could picture it painted black, with a fin on top behind the turret, and a bat emblem on the grill instead of the Iron Cross!

Yes can see that too! I can see this kit being used as a base for all sorts of steampunk kitbashing.

Any issues on the build? I got their Lanchester for Christmas and started work the other day. Nice kit but the suspension is fiddly and the radiator fit is causing problems, forcing the front halves out at angles. Which stops the bonnet fitting correctly. Still whittling it down to make it fit. I’m sure it’s a problem of my own making.

I had a couple of minor fit issues with the upper body panels and roof. But I think they were of my own making. No problems other than that. The axles are fragile so be careful of them. I built the Lanchester a while ago and quite enjoyed it.

Check the fit of the roof and the visor armour before procedding with the Lanchester.
The radiator fit fine on mine so that issue is propably home brewed.
The roof of the fighting compartment needs to have the edges beveled, same for the sides.
Compare the image in this link with the kit parts: 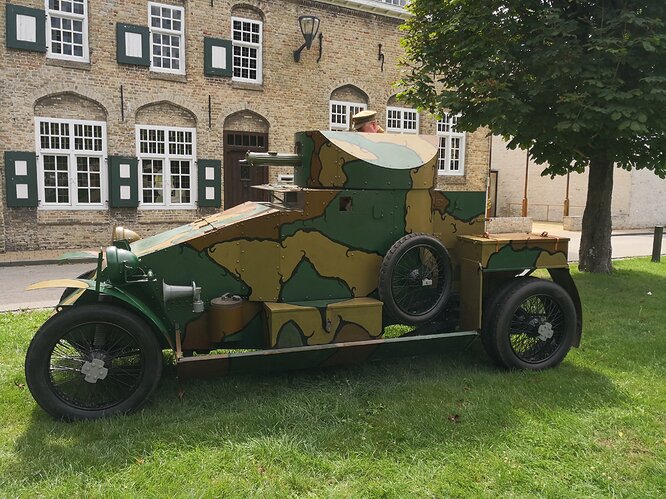 3968×2976 2.26 MB
(OK, discourse copied the image but maybe as reduced size, click the image for a larger view)
The kit parts will have the roof showing the full oversize armour thickness at the edge, in the image the edge of the roof is barely visible)
1 Like
phantom_phanatic December 31, 2020, 6:19pm #13

Thanks. I probably should have test fitted it a little earlier, but was caught up with the suspension I didn’t spot it till I turned the first page. It’s forcing the front plates out at odd angles. The hull sides and bonnet fit fine if I pull it out. Sanding down the sides of it till it fits better. Not much of it can be seen, so not too fussed about losing a bit on it.

What, wow a cool machine.
I know absolute squat about the Great War. When I catch any history program about it, I am always shocked about what kind of weapons were used.
Nice job on that kit.

Thank you, The First World War was the first ‘industrialized’ war. The generals started out thinking that the war would be fought pretty much the way it was fought in the Napoleonic era, with massed infantry and cavalry. This is exemplified by the uniform that the Hussar is wearing. Advances in artillery and the advent of the machine gun changed all that.

This is really obscure and really neat! I love it! Congrats on a cool build.

Thank you, and it is the definition of obscure for certain.

Have managed to sort it out today. Little bit sanded off the sides of the radiator was all that was needed. The bars for the lights and suspension springs kept the hull sides in line and the bonnet fitted perfectly. I even managed to click the front armoured panel in place with no glue.
If I do another I’ll remember to test fit it properly!