Folks, some of you may recall I mentioned this within Matthew Toms’ thread “Epic Fail” when I referred to the problems I had building this. It represents a Morris Mini Minor in use within the supporting transport squadron of the Royal Corps of Transport (RCT) to HQ British Army of the Rhine located at Rehindahlen, near Moenchengladbach. It entered service with the British Army in 1967. I remember seeing them around in Wiltshire where I grew up and there was a heavy military presence so one was always falling over military vehicles of some kind.

The kit is the ancient, almost prehistoric Airfix 1:32 kit and being so old was more problematic than I’d bargained for; I modified it to LHD for service in Germany and tried to add extra detail. I had problems with fit, especially of the transparencies which I then managed to fog with glue. The fit issues perhaps were not surprising for such an old kit but in a way I bit off more than I could chew in trying to bring it up to acceptable standards. Even when I’d built it I realised I’d left off some details such as the rear view mirror; on top of that the gloss varnish didn’t take particularly well! The extras I had added to the interior couldn’t be seen due to the fogging explained earlier. The female figure also conspired against me; I’d identified a base figure from one provided by Aurora (JGSDF female) and attempted to modify it to produce a representative Driver figure from the British Woman’s Royal Army Corps (WRAC); so, I duly added Milliput to the skirt, and tried to modify the headdress. I hadn’t realised that the Aurora models were not made in white metal (which is normally fairly soft) but something of the hardness of tungsten! In any case, I damaged the face and had to rebuild it using Mr Dissolved Putty, and eventually manufactured a beret out of Milliput. Now, the girls at the time would normally wear their peaked forage cap but that was beyond me so I reasoned that perhaps when on driving detail they could wear a beret. Whilst wrestling with this figure I dropped it and had to rebuild the face once more, and repaint it.

The male figure represents a long serving private soldier (“Driver” in RCT parlance) who has been up and down the ranks a few times and works in the Squadron office. The scenario being that the girl has just finished her driving tasks for the day, probably involving fairly large distances within the British Forces Germany zone. Upon parking up outside the RCT Squadron offices Tommy Atkins hoves into view ever ready to prey on a female soldier; to that end I chose a smiling/leering Hornet Head and modified the base figure of General Macarthur from the Tamiya Famous Generals set. The female Lance Corporal is nobody’s fool and keeps her vehicle between the 2 of them while she devises a suitably cutting rebuttal.

So, all a bit of a sorry tale; not one of my more successful models but I thought it might be of some interest, even if representative of how not to do it! 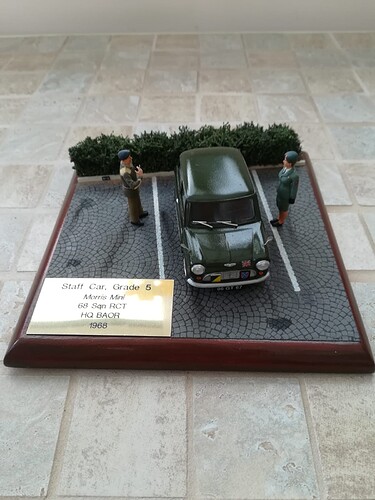 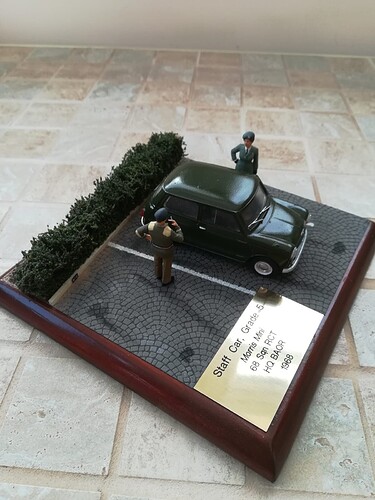 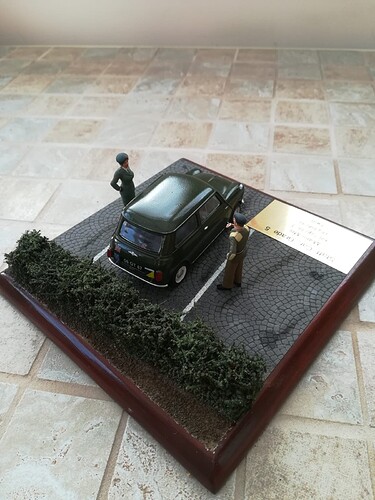 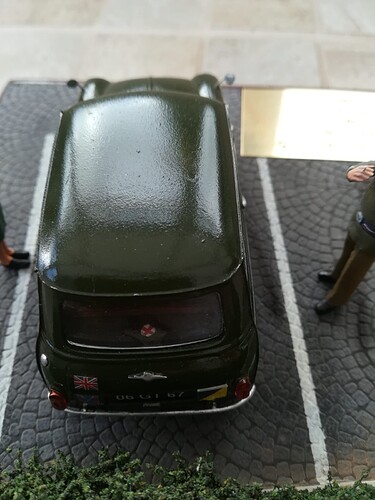 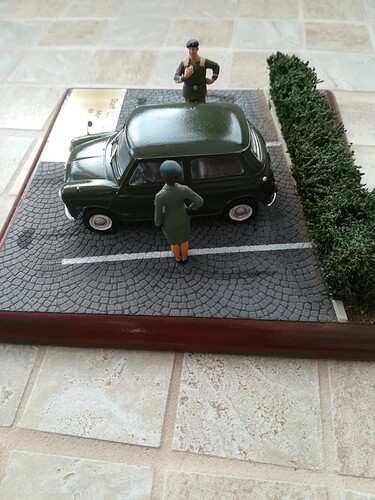 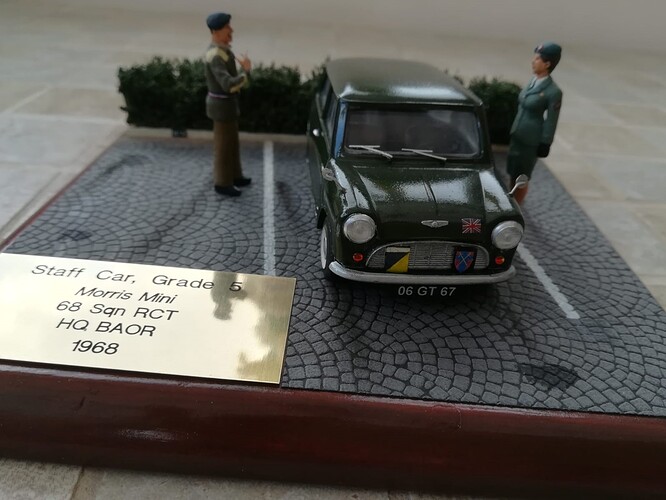 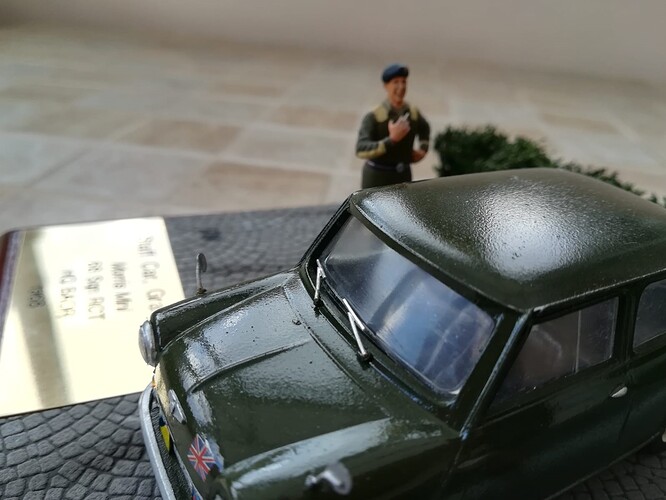 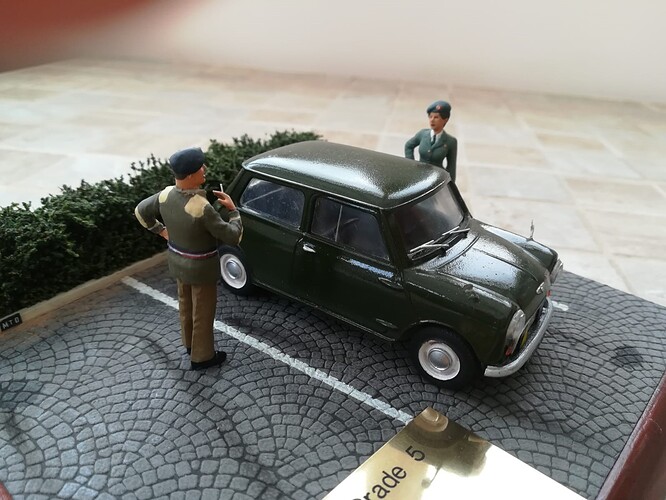 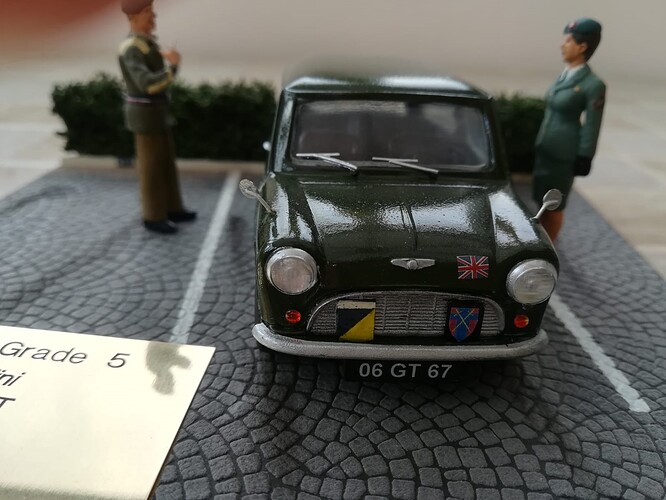 Looks good, … from a distance

Gloss paint is the Nemesis of many among us, flat/matt is a LOT easier.
The orange peel effect has been the undoing of many …

I think the result is respectable considering what you started with.

I appreciate that Robin - gloss can be a bit of a bugger. Lessons learned I suppose. Of course, the long serving (male) Driver was clearly hoping for steamy windows, however, I have great faith in the resilience of the WRAC girl (based on bitter experience albeit later than 1968 I assure you!)

nice job! probably I add a suitcase
in Italy was used newspaper on Fiat 500 to support the steamy windows effect…

Well for so many problems I think you have made a decent go of it! It tells a nice little story and the car is pretty good for such an old and very small (and I’m sure very fiddly) model!

Thanks Karl; I like to think the planning was fine but the execution poor!

Great concept!
I had done a few dios covering my peace time army experience but I got out of that genre a long time ago.
Once again, a successful dio as the story is self explanatory with no text needed.

Thanks Jerry! I must just emphasise that I’ve set it in 1968; I didn’t join the Army until the following year. However nearly 10 years later I was indeed posted to Rehindahlen. I know both the species quite well - viz the long-serving Private and the fairer members of the WRAC(!)

Made a decent purse out of a swines auricular sppendage there Brian. Nice end result.

Thanks Paul; I suppose I model for effect and if a kit comes out somewhere between 60 and 80% as to how I imagined it , then I 'm more or less happy. This little effort was below that but somehow I suppose I still managed an effect. Enough of the philosophising - thanks again.

Bloody hell John, I didn’t know you knew that type of pullover! It was the type that was succeeded by the green version but these old khaki ones were very well made with a high wool content (unlike the synthetic green ones), a fastening lace at the collar and then the shoulder and elbow patches as well as a reinforced cuff of khaki drill. They were quite substantial items; I never wore them but the permanent (adult) staff in Junior Leaders had them when I rocked up in '69; us junior soldiers were issued a 1943 roll-neck pullover in a sort of pinky-fawn colour with suede patches on shoulders and elbows. Even though it was a roll-neck by design we had to wear it with a Khaki Flannel short collar showing.

For the RAOC I think the green “woolie pullie” only came in, in around 1970/71. We were issued them in our last term (1971) and as the senior course were allowed to wear them during our final term and trade training.

Lol… I’m not old …I actually bought one of them… Must of been late 83 In a surplus store in Bristol. It was new, never been worn … Was pretty robust and I only wore it on exercise… Till it got covered in battery acid and it didn’t take kindly to that haha

Not much does - take kindly to battery acid that is.