Here we take a look at a Tankograd offering titled ;Berlin Brigade Vehicles of the US Army in West Berlin 1950-94'. 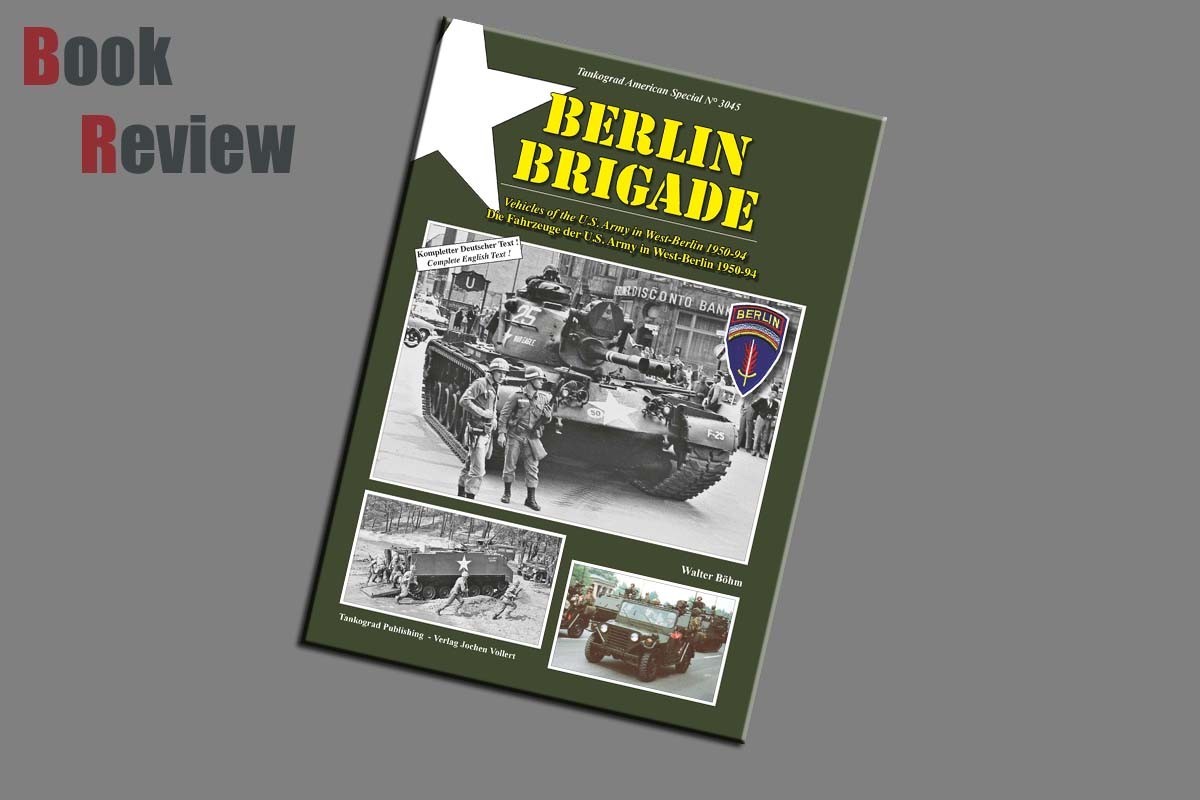 Well, thanks for that Darren! Another must have for me; Tankograd really do provide modelling inspiration for Cold War modellers. 'Could really do with an M59 APC in injected plastic - or even resin come to that. As far as I’m aware, no one makes it in 1:35.

Yes definitely gotta get a hold of this. Many diorama ideas.

Interesting. I’ll probably get a copy for “old times sake.” My career took a strange little segue in the early '80s as I spent almost a year as a Scout Squad Leader in the Scout PLT/CSC/2-6 INF BBDE. Fortunately, I was able to wrangle a school’s slot, so I missed that year’s “Parade Season” and after an MOS reclassification (to 18B), I was able to escape down to Bad Toelz (and ARSOF-E and PCT, but that’s another story…).

Interestingly to note, I was told at the time that the reason why none of our vehicles were painted in MERDC cammo was that camouflage was considered “provocative” and we certainly didn’t want to provoke or cause any concerns for our Soviet counterparts… LOL! (Funny how the Brits in Berlin didn’t have any such worries.) We actually received a “brand new, Third Shop” refurbished M151A2 for our PSG that was camo painted in MERDC which was promptly sent to be repainted in semi-gloss OD.

Also interesting was that to keep our plane-Jane OD vehicles looking their best and most satiny, we regularly used aerosol furniture polish to wipe them down (just love that fresh, lemony smell in the morning in the motor pool!). The “approved” (i.e. the commanders at all echelons simply looked the other way) normal “polish” was ordinary diesel fuel. Fortunately, our little M151A2s were small enough to only need about a half can of Pledge furniture polish, so it was worth the price at the PX to not have to get soaked with diesel just to keep 'em shiny looking.

Michael, fascinating! It reminds me that once a certain brand of officer took over the Brit command in Berlin, he ordered that the camouflaged - that is the urban paint-job vehicles -be repainted in the usual black and green as it all looked “unmilitary”.

The diktat on camouflage being deemed provocative applied to the uniforms worn by the Brit military mission (BRIXMIS) operating throughout East Germany; camouflage pattern (DPM) was not permitted to be worn, as if you were ostensibly merely a liaison mission (as opposed to the actual espionage role you undertook), why on earth would you wish to wear camouflage as part of your attire? Ergo, you must be up to something other than liaison if you need to conceal yourself. Hence no DPM for BRIXMIS (though I think towards the end of the Soviet presence and the demise of East Germany, DPM was, on occasion worn).

As it happened, part of the Brit uniform at the time was mainly a green-based working dress, but back in HQ BAOR where I worked in the G Int & Sy Coord branch, we were responsible for supporting BRIXMIS and all the Defence Attaches in Communist bloc countries (less Moscow) and most of my job was spent on procuring all sorts of equipment (early TI equipment for one) and clothing (and coordinating the modifications to Opel Senators at a special location back in UK). For instance, the issue parka at that time was available only in DPM, so we sourced the Canadian version from the Canadian government - a green version - and essential for a German winter as I’m sure you’ll appreciate. The issue woollen shirts - albeit in green - were distinctly uncomfortable (and very poorly made) so obsolete OG shirts designed for the jungle were sourced from somewhere. Also RAF Aircrew pattern boots were favoured by BRIXMIS, who really didn’t want for very much at all!

One other item I had to source was bottles of Scotch; whenever there was a detention, either of BRIXMIS or SOXMIS (the Russian counterpart operating within BAOR turf), depending on the severity and political impact of the incident, either General Zaitsev (the then commander of GSFG) would visit HQ BAOR, or the CinC BAOR visit HQ GSFG; Scotch at one location and vodka at the other. Truly, diplomacy was then lubricated with booze.

LOL! Hadn’t thought about this stuff for years, but I knew several guys who were drivers for the US Mission, and, if memory serves me, they were required to wear the US Army Class B dress uniform while “touring” around in the former DDR (for the same reasons).

After I re-classified my MOS, I would have stayed in Berlin if I could have wrangled a slot as a MIL Mission driver, but those jobs were HIGHLY coveted and almost in the category of “who you know” for assignment selections. Everything turned out for the best, anyways, but I did envy those guys at the time. Would have been a great job and tour.

The trouble with me was that by the time I’d discovered all about BRIXMIS and what they did in detail it was really too late career-wise to do much about it. I like to think I would have flourished. Working alongside the Intelligence Corps boys (in the same staff branch) I would frequently beat them in ad hoc equipment recognntion tests - not that that was the be-all and end-all of course of what BRIXMIS did.

Sadly, one of those shoulda-woulda-coulda moments; but I learned a lot back then, the Cold War was a very earnest affair and if nothing else things were interesting. The posting that followed was in Africa where I got to drive a T-55. Happy days!

We used non-corrosive brake fluid as well as diesel. Please let me know if the book shows bumper codes on the M151A2. If so I’d be interested in it. Also want to do one of the M109’s as “Steglitz.”
I seem to remember BBDE but can’t even remember which side it went on. I want to replicate one of the vehicles I did wall patrols on - slightly past your day as units at McNair became 4th, 5th, and 6th of the 502nd.

I can probably dig up some photos of our platoon vehicles that might at least provide a definitive - if dated - layout for the bumper codes. We’ve got a platoon FB page that guys are always posting up wall patrol photos. I’ll snag a few of those for you if you’re interested.

I was well aware of the Mil Mission driver positions at the time. One of my classmates from DLI actually got assigned to Berlin as a driver at the same time as I went there to another unit. Unfortunately for me, the timing of a number of different events put me in a position where I had to choose to either stay in Berlin or drag my wife and infant daughter through another PCS move within a couple of months me finally getting quarters assigned and my family arriving to the city. By that time we had been separated because of assignment moves for nearly a year. I elected to stay so they wouldn’t have to move back to the states again while waiting on housing (once again), but my only option was to go an infantry position in 2-6 INF since there were no open Mil Mission slots at the time. The captain that I had worked for had made the same choice and was actually the CSC/2-6 INF company commander, so getting a position in the Scout Platoon was easy.

All in all, it wasn’t the worse thing that could have happened. The Scout Platoon assignment gave me some professional development experiences that I likely never would have gotten otherwise. By the time I had my fill of the “regular Army,” I was eligible to re-classify my MOS, and since there were no slots for my new MOS (except the Mil Mission driver positions which were full), I was able to make an intra-theater transfer back to where I belonged.

A happy ending in the end.

I’ll see what I can scrounge up. We had a guy in our platoon who married a local German girl and stayed there for years. IIRC he’s posted up photos covering a period from around '79 until maybe the late '80s. I can’t believe that I haven’t been copying and saving his pics, anyways.

I’ll PM you soon to let you know what I’ve found.

Yeah. I call her my “starter wife.”

LOL! I’ve seen and met more than a few of those at team parties over the years!

Time was you could tell which Group an SF dude came from by looking at his wife:

I always introduce my wife as “my current wife” just to keep her on her toes.

I like to introduce mine as my ex girlfriend.