I did get a copy of the book “Lost Berlin”, which shows many prewar Berlin city photographs. Problem: I’m not sure of the size of the actual paving stone sizes used in the streets, and I do think some brick-paved roads still exist today. Anybody know?

I’ve walked the streets of a few Germany cities. I doubt there is a one size fits all answer. Many are random cobble stones.

Paving stones. Hmmm. I would say as many sizes that can be imagined were used. And all kinds of patterns as well.
J

I doubt there is a one size fits all answer.

Yup. I haven’t been to Berlin, but I have been in several other German cities. There are all sorts of cobblestones and paving stones to be seen, in various sizes and layout patterns, as well as simple pavement. It all depends upon the neighborhood/part of town. How old is is it? How heavily damaged or destroyed in WWII? Was that area restored to previous look or rebuilt modern?

This is germany. Everything is DIN! 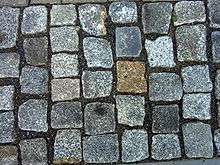 Article in german but the drawings should work or google translate

Really? I mean really? Are you planning on producing a diorama that reflects complete accuracy re paving stones? I mean c’mon. The good folk on Armoira have better things to fo with their time - surely?

Or did you just “wonder”?

Sorry all: gotta be said.

Are you planning on producing a diorama that reflects complete accuracy re paving stones? 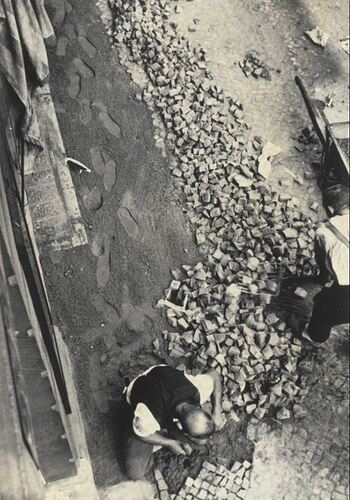 So why should you

Reference my last: Clearly “Armoira” should have read “Armorama” (for some reason my spell-check seems to have deserted my comments box).

It may seem overkill to some, but then again, if you never ask the question…

There’s a fine line between AMS and madness!

In a brief moment of mental clarity,

I foresaw this very question during my visits in Germany. I examined many cobblestone streets. As others have previously noted, there is a great deal of variety in sizes, shapes, composition, patterns and colors of cobblestones. Here is a photo of some in Dresden, probably among the most colorful ones that I noticed; 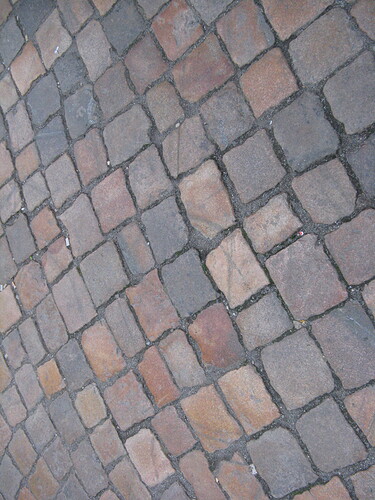 Here are some others in Frankfurt; 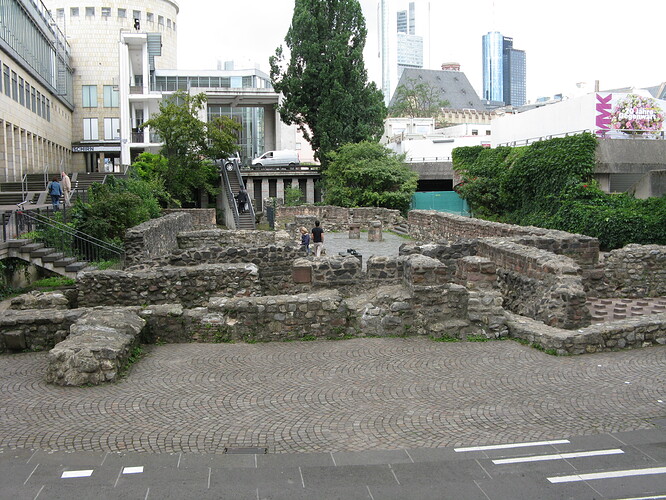 And some others in Koln; 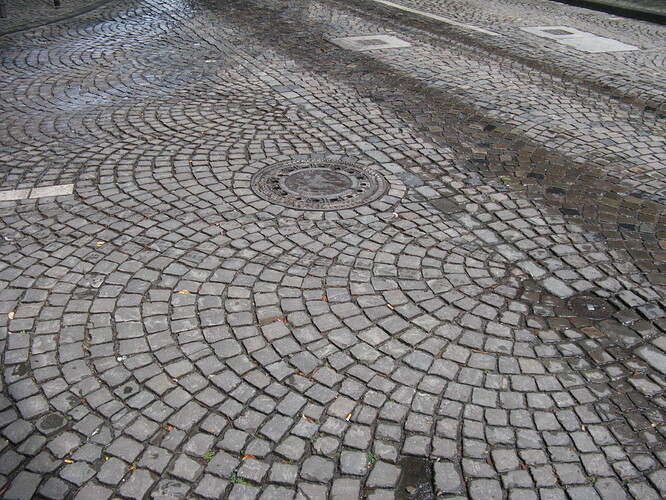 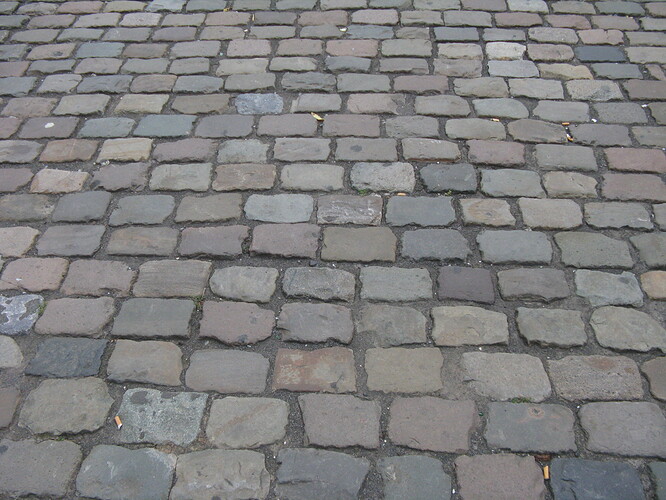 As for producing the pattern - not very hard. Use XPS foam for your base and scribe it in with a ball point pencil. Some “wood glue & black color” (Or ModPodge and black color) to harden it, then paint in base color, pick out some stones, wash, be done.

Tabletop roleplayers use that for their terrain pieces a lot. The wall is a rougher example 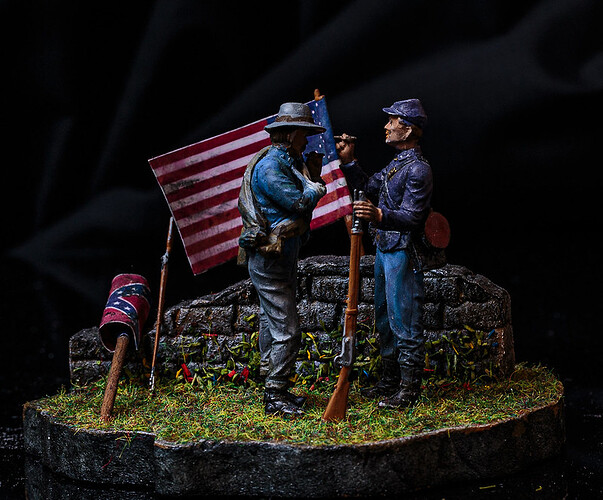 If we’re talking stone setts (“cobbles”) then they are probably in the neighbourhood of 6"x6" (15cmx15cm) or less.

On the AMS vs insanity issue, I remember the quote about Spike Milligan: “On the border between genius and insanity he knew all the guards by their first names…”

While I would agree that there is a fair degree of standardization with respect to size, at least among those stones that I observed, this wasn’t always the case, as this example, also from Dresden, illustrates; 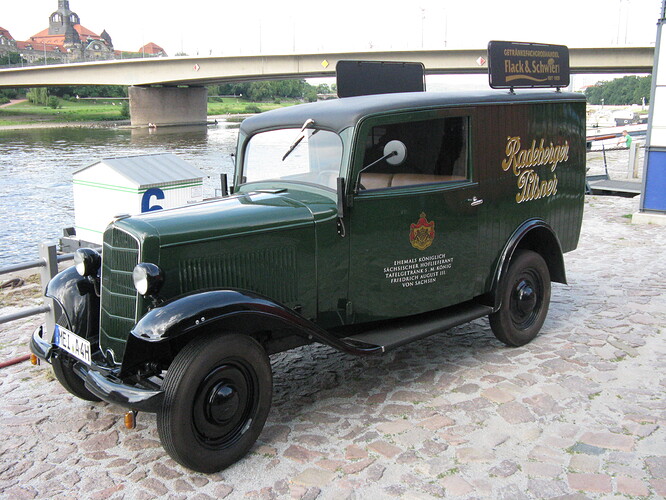 Rectangular ones in Heidelberg; 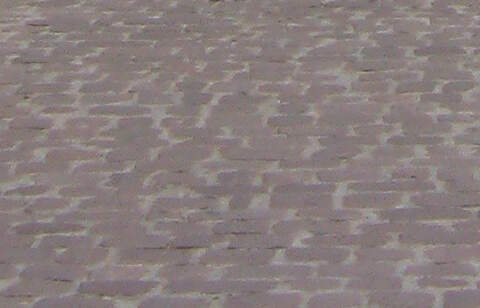 This sidewalk is obviously modern, with the uniformly cut stones, but the street to the left shows two different sizes of older cobbles, Limburg an der Lahn; 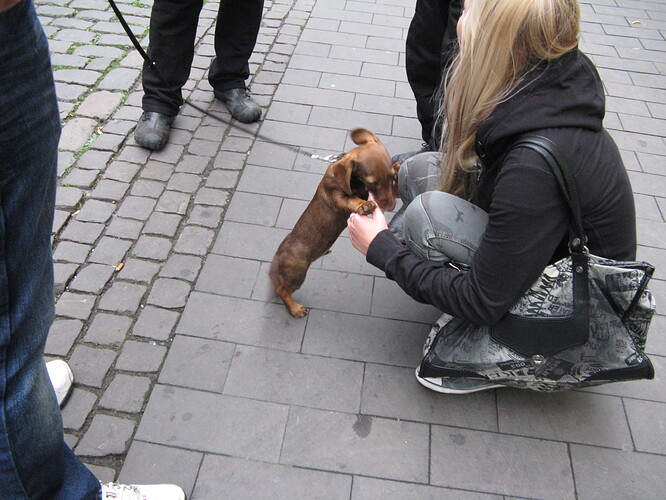 YT video of a guy actually building a Berlin street in 1:32

Otherwise: Size so they can easily be thrown by a student

Size so they can easily be thrown by a student

Aren’t they supposed to be studying !!!

In this case, it’s sport!

Why spend a lot of time and money to produce something that ends up looking wrong? in 1/35 scale, even a millimeter’s difference would have a large impact.

Whilst modern paving slabs are precision cut, modern replacement cobblestones are not all always cut to the exact same size. I saw that in Prague where a load was dumped for the workers to continue repairing some roads where cobbles were broken or missing, and one guy was rough sorting them!

Remember cobblestones are generally cubes, paving slabs slabs are thinner but wider and longer. Then you have actual paving bricks. The bricks are twice as long as they are wide (the herring bone pattern requires that).

The only rule of thumb for true mason cut cobblestones - they are never wider than the average man can hold between thumb and fingers - for obvious reasons, see Henri-Pierre’s pic above. That would make them around 9-10 cm max wide for relative comfort.