Best Tank that Never Was - Part 2!

Group Build Description: This is a follow-on campaign to last year’s “Best Tank that Never Was” build, and any kit started or proposed for that build can be carried on to completion here for an award! From the previous blurb:

Ever seen a prototype that didn’t quite make it to series production? This campaign is all about those “more than a sketch on an envelope” concepts that for whatever reason failed to make the final hurdle to standard-issue equipment! It can be something already kitted, such as the T29/T30/T32 heavy tanks the US played with at the end of WW2, or something more obscure like the Canadian Skink AA tank or the US T31 demolition tank that require kitbashing or scratchbuilding. Not to mention Maus and other paper panzers (if they got further than a sketch, that is!) or indeed many of those odd Soviet beasts like the Objekt 279 “flying saucer” tank. We’ll need to see photos of it in testing or at least as workable factory blueprints (or as part-built captured hulls…) to weed out the more outrageous Rattes etc, as well as some build pics along the way. And it could be a cancelled upgrade to an existing vehicle (such as the 120mm-gunned Leopard 1) rather than a whole-new platform. There will be a badge (eventually!) and extra kudos to those doing more obscure subjects - plenty of backstory is always welcome. And don’t get too hung up on “tank” - I’m sure we can all appreciate wheeled vehicles, APCs, and other battlefield would-be developments as long as they ultimately failed to go into service!

Completion Award: A badge will be announced and awarded to those who complete.

Here ya go gang, the follow-up for even more would-be vehicles! Bring your new builds and part-bakes - the aim of this group build is to get finished models on the shelf. And please offer up plenty of back-story on your chosen subject so we can all learn something and have fun…

This is great. I got too busy for the last one. Now I have a prime candidate on the top of my queue. The Imperial Japanese Army 150 ton super heavy tank O - I. 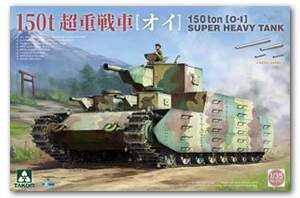 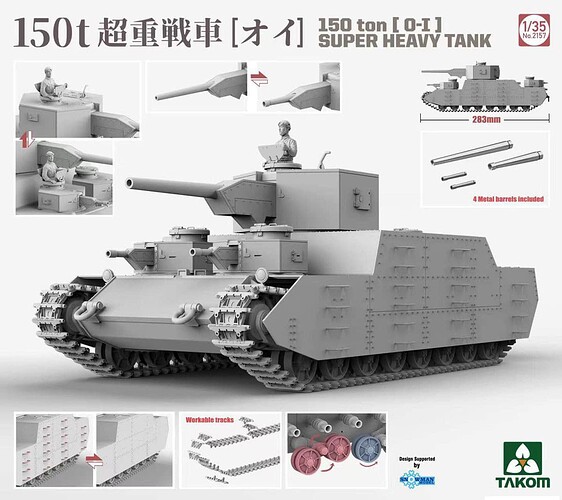 After the Battles of Khalkhin Gol against the Soviet Union in 1939, Japan tried to improve their tank designs using lessons learned from this battle. Many Japanese tanks such as the Type 95 Ha-Go light tank and the Type 97 Chi-Ha medium tanks were proven to be insufficient to counter Soviet armored forces. A larger tank design was urgently needed. A super heavy tank project was proposed directly in response to the Japanese defeat at Khalkhin Gol.[2]

In early 1940, Hideo Iwakuro, a colonel with the Army Ministry of Japan (陸軍省 Rikugun-shō) ordered the Army Engineering Division to develop a new super heavy tank. Colonel Iwakuro indicated that the new tank should be at least two times larger than the current Type 95 Heavy Tank (26 tonnes). The general outer appearance design was not dissimilar to the Type 95 Heavy Tank.[2] The proposed 100 ton prototype was to be equipped with a Type 92 105 mm cannon for its main gun.[2]

The development process was restarted by the Mitsubishi Heavy Industries Tokyo Machinery Division on the 120 ton version under the designation “Mi-To” (for Mitsubishi -Tokyo). Later it was given the official designation of the “O-I tank” (オイ車). “オ” is an abbreviation of “大き”(big or large) and “イ” in Japanese army nomenclature, refers to model number 1, from the old Japanese alphabet iroha. The tank was again to be equipped with a Type 92 105 mm cannon for its main gun.[2] Its two smaller front hull turrets were designed to be “offset slightly left from the mid-point”.[3] One turret was designed to carry a Type 1 47 mm tank gun as secondary armament. The other turret was to carry a 7.7 mm machine gun. The rear hull was designed to have two more smaller turrets each with a 7.7 mm machine gun.[2]

One of the main features of the O-I tank was its thick armor. Its armor had a maximum thickness of up to 200 mm, as well as 35 mm +75 mm plates on its sides and 150 mm at the back.[2][1] The tank was to have two V-12 petrol-fueled aircraft engines designed by BMW in Germany and licensed to Kawasaki Heavy Industries in Japan. This was the same engine used in the Type 5 Chi-Ri medium tank.[2][5] The engines were mounted “lengthwise parallel to each other” in the rear hull.[2]

According to historian Steven Zaloga, there were “rumors that work was underway” on the 120-ton version, but no known documentation survived the war.[6] According to Akira Takizawa, one prototype of 120 tons was completed in 1943. However, the tank was “unpractical” and the project terminated.[1] According to Kenneth Estes, the O-I project was cancelled before the 120+ ton prototype was completed.[3] According to another source, the model kit company FineMolds in Japan bought some original documents and plans of the O-I. The source also contends that the proposed 100 ton design and “140-150” ton design are “incorrect representations of the O-I”.[4] A tank track from the project is on display at the JGSDF Fuji School in Japan. In the end, the complete history of the O-I prototype is unknown due to the project’s obscure nature and the limited documentation known to have survived post-war.[4] - Wikipedia.

I’ve got a model on my bench now that will keep me busy until the start date. Meanwhile I’ll just keep pawing through the box - this thing is a monster.

And I was thinking of this guy who is in my stash-
http://www.hobbyboss.com/index.php?g=home&m=product&a=show&id=1441&l=en

Well maybe I’ll actually start my HUMMER with a M22 Bushmaster this time.

I am on for this campaign!

Would a Panther F work for this campaign? Hull were built, turrets were built, but they were never mated together.

We’ll need to see photos of it in testing or at least as workable factory blueprints (or as part-built captured hulls…) to weed out the more outrageous Rattes etc, as well as some build pics along the way. And it could be a cancelled upgrade to an existing vehicle

O.K., but a bit of special pleading from a “modeller” who rarely completes anything, let alone for group builds which they have great initial enthusiasm but in the end contribute nothing but noise…
How about “What Ifs” of one’s own devising, provided:

I’m thinking of the M18 Hellcat which was experimentally fitted with the Turret from a M36 Jackson with its 90mm gun. What if one of the pair of M18s supplied to the U.K. for evaluation was fitted by them with the turret from an Achilles with a 17pdr? Alternatively, the Achilles turret could be fitted to a M24 Chaffee light tank chassis which later became relatively plentiful (I believe all these employed the same turret ring) in the way the French later retro-fitted some of their M24s with an AMX-13 turret.
I know this is a bit of a stretch but I expect there are a lot of modellers with disparate bits aplenty and this might encourage participation by not having to make a special investment. Provision 3 above is mostly there to accommodate the Frankenstein products of the Third Reich; Pz35(t) with an AA mount anyone?
For myself I’ve been contemplating the “Archbishop”, the Bishop SPG was starting to fall out of favour as the first “Pheasant” 17/25pdr AT guns were arriving in Africa…

Panther F is perfectly OK! We don’t know if any of the prototype turrets found their way onto a hull temporarily, but all the bits were there.

Hmm. “What Ifs” are tricky, as I don’t want this to descend into Paper Panzer '46 territory with laser cannons on flying saucers. I’m tempted to say yes to “all the bits were available” lash-ups, but they would need serious explanation about how they worked and why they might have been considered for development. For example, what impact would the recoil of a 17pdr have on the M18 hull? As it is, the Achilles was a “dynamic” ride when it fired! And its hull was heavier…

We know the M36 turret was fitted to an M18 hull with a view to switching over if the war lasted a bit longer, and we know the M26 turret was tried on an M4 hull, so there was a lot of experimentation out there, only some of which got documented for us modellers. And I wonder what similar experiments the Germans were doing? It seems flak turrets were designed for nearly every chassis they still had by the end!

What does everyone else think?

Tom, I’m sort of tempted - though my completion rate for campaigns is somewhat lacking - would say, an MBT 70 depicted as in service - fit the bill, or does that verge on What-Ifs too much?

I made one sometime ago but with another 2 in my stash fancy doing another; not be confused with the Kpz 70 - though I’m tempted to do that - as in service - as well(!)

When I say “What If” I don’t mean a qualifying build that happens to present the model as if it was in service - that’s perfectly fine by me. The “What If” I was trying to avoid was things like Nazi flying saucers or 1000-ton moving fortresses - concepts that were beyond any realistic expectation of development or testing because they are so outlandish. So by all means do your MBT 70 fully kitted out as if it had been fielded! (One of the best builds of the A39 Tortoise I saw was marked, kitted, and weathered as an in-service tank, even though they never got beyond the testing stage…)

Aha! I see; well, might be game on here, but first I have to undertake some serious rationalisation of my models and must tackle several stalled projects first. That’s the trouble with this hobby, too much inpsiration too easily, and the slower build rate as the ideas surge ahead.

Good! I finally have reason to build this kit! I bought it almost 10 years ago. 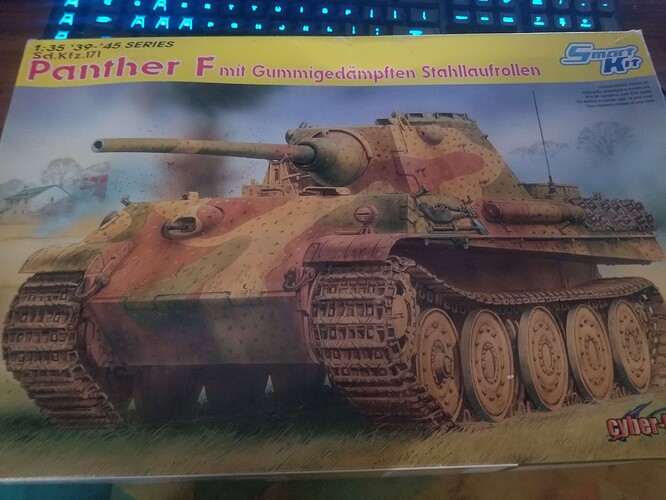 Very nice! I’ve always liked the sort of trimmer-looking turret on this type.

For some reason I’ve alwys fancied finishing one in gloss Bronze Green as though under evaluation by the British Army post-war. Just a whim I know.

Somewhere I’ve got pics I took of the Schmalturm at Bovington, many years ago. It’s amazing to think a crew was meant to fit inside! Looking forward to your build.