Figure painting has occupied my activity lately and it coincides with finding a bunch of 50-yr-old figure sets I have. I had a lot of fun with these back in the day.

These are WWI British infantry from a MPC diorama set…

… Several of the Tommys were painted way back when. Most are not painted. A few of the Airfix Arabs are painted but most aren’t. I decided to paint these little dudes to use excess paint mixes from ‘serious’ models, to test techniques, and because I want to.

None are completely finished but all are close. When my new glasses come in, maybe I can improve them. 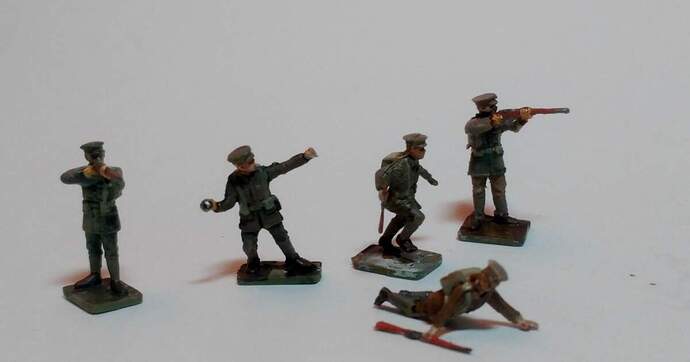 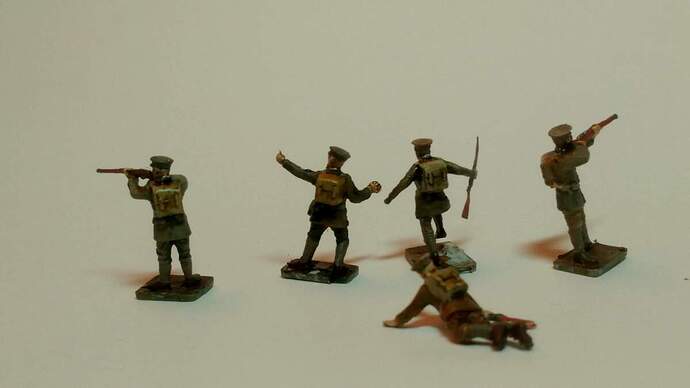 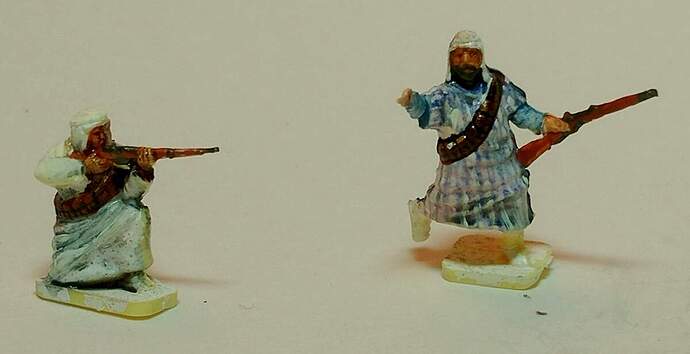 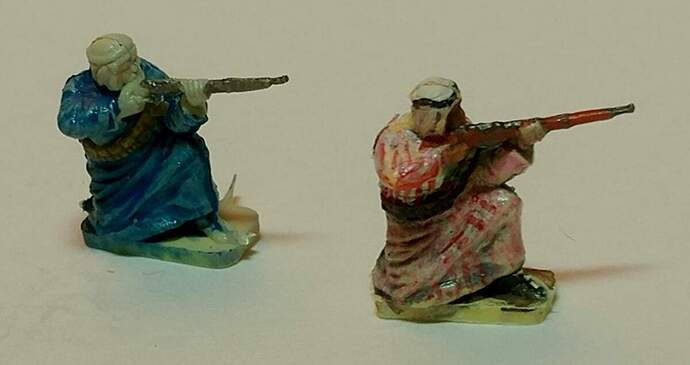 I wonder what happened to that plastic battlefield base? (Probably part of that solid glob of melted models that filled some driveway sealer buckets that made up my model cemetery.)

I had a lot of fun with those little beggars when I was at school and used them for my first “serious” wargames. I used the Arab Camel riders as Dromedarii for my Romans. There were conversion articles in “Airfix Magazine”, because the bendy plastic wouldn’t glue you had to Shish Kebab cut off tops and bottoms with cut-down dressmakers pins (also useful for attaching riders to their mounts). Although there’s many more varieties of 1:72nd bendies about these days I wouldn’t go back to them. My weakness has been the newer 28mm (1:56th) sets in hard plastic that assemble with proper polystyrene glue. If you don’t want the old paint peeling off problem these are the answer for mini-dioramas. Fantasy may have lead the way (and are still being reinforced by many manufacturers) but the historical miniatures gang are also well established now. The great advantage is the multiplicity of alternative parts included, no need for rank upon rank of the same figure. If you wish to just dip your toe in the water most manufacturers will sell you just the one frame of figures (albeit at a premium) rather than the three or more of the same item that make up the boxed sets. My personal favourites have been Perry Miniatures, Warlord Games and Gripping Beast but there are many others I haven’t tried (yet!). Also keep an eye out for “Wargames Illustrated” magazine, you’ll often find it is bagged and comes with a frame of whatever their latest plastic product Warlord Games have come up with; usually the magazine price is much cheaper than buying a single such item direct. Be sure to have a look at all the copies on the shelf, there are often different frames from the same range randomly included with the same edition of the magazine. A recent issue could have any one of three different Landsknecht Frames: Pikemen, Shot, or Zweihander. Prior to that I picked up a frame with two different 1:300th scale Vosper MTBs and still curse there were no copies with the S-boats left… If you fancy a try at the silly stuff, look out for “Age of Sigmar: Mortal Realms”; it’s mostly on subscription now but if a stationers has a standing order for a customer they’ll often get a spare copy and put it on the shelf. Other than the issues with paints in them this usually means a saving over GWs usual usurious prices which varies from marginal to substantial, there’s a site called “Fauxhammer” which analyses the economics. If there’s something that particularly takes your fancy at least in the UK “Forbidden Planet” has a list of back issues they still have in stock as well as offering pre-orders for forthcoming issues.

Lots of information. Thank you.

One if the things I’ve experimented with is how to make paint stick to the sift plastic. Years ago I started using Krylon’s spray formulated for plastics and it has not flaked o peeled off - although I certainly don’t handle (play) with the figures like I did as a kid.

Another idea I discovered is to spray them with artist gesso. I tried it and, again, no loss of paint.

Those Airfix boxes of HO scale figures was an early addiction of mine. 50 cents each box when I was a kid! I painted them with Floquil matt paint mixing my own colors even back then.
I had at least 20 different sets. Sold them all on eBay about 20 years ago.