British Army Monowheel Motorcycle (What If)

Sadly, I’ve become a bit bogged down in my Cold War Leopard project but I thought I’d fill the gap for the moment with this little model, produced by Weird Armies Reign, who produce, or produced a series of fictional extended WW1 and post apocalyptic models. I seem to recall that they’re no longer in production due to extensive pirating. It took some time to track down what I wanted but eventually I obtained the monocycle motorbike from a seller in Russia.

As an alternative to the 1919 scenario I thought I’d depict it as a prototype undergoing trials in the British Army c.1925. I planned on visiting Staff Officers giving the new motorcycle the once over, having travelled down from the then War Office to somewhere like Aldershot or Chobham; I therefore obtained (at quite a hefty price) the ancient and rare Airfix 1:32 Morris Cowley to use as a Staff Car. Whilst it’s 1:32 it seems to fit in OK. The WAR model was very well cast and detailed and these vehicles certainly existed in the 1920s and there’s some entertaining footage on YouTube. The Lewis MG is a bit of a fantasy as I’m sure it would unbalance the machine but it looks the part I feel; I also added a few minor mods such as cabling, rear light and number plates. The figures come from a variety of sources including Tank, Masterbox and Resicast; I replaced 2 of the heads with those by Hornet. The scenario is that the visitors have just turned up after flogging down from London, where they are met by the Project Officer running the trials; the Sgt in the saddle has been hard at it all morning but is quite cheerfully explaining to the Major General the virtues and vices of the machine. The General’s Military Assistant (MA) is busy taking notes. I should have modelled him as a Lieutenant Colonel but forgot so he’s shown as a Major.

The Royal Army Service Corps Corporal driver is staying in his vehicle looking on with interest; next to him on the front seat is an umbrella for use by his illustrious passengers if required and his road map. On the rear seat is a briefcase, Thermos flask and a Secret file - concerning the project - which can just be seen. The Home Forces marking on the vehicle is really a fiction as it wasn’t used as far as I’m aware until the late 40s. 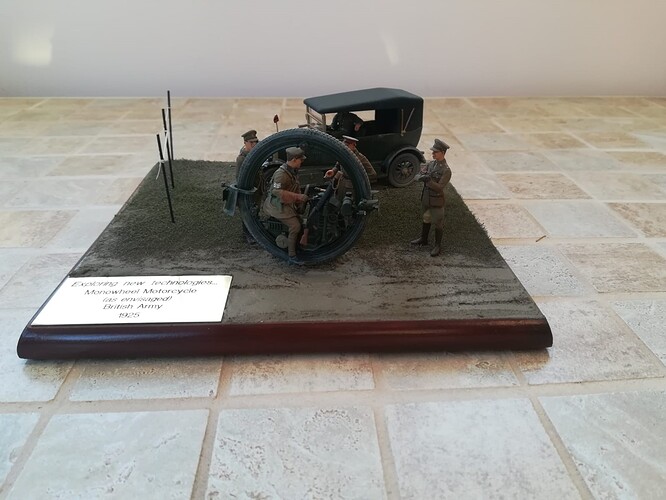 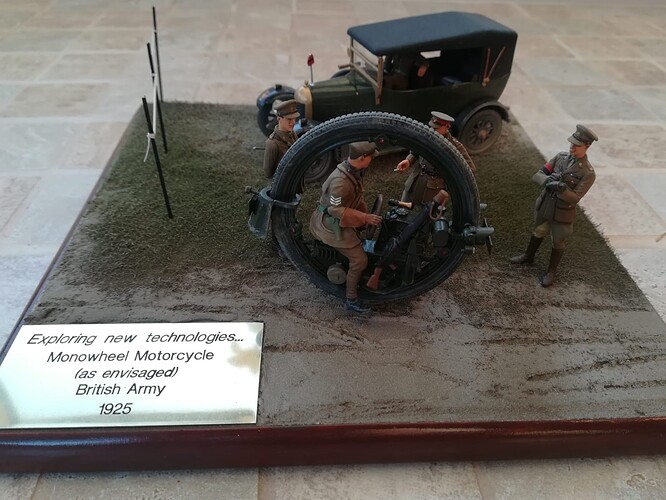 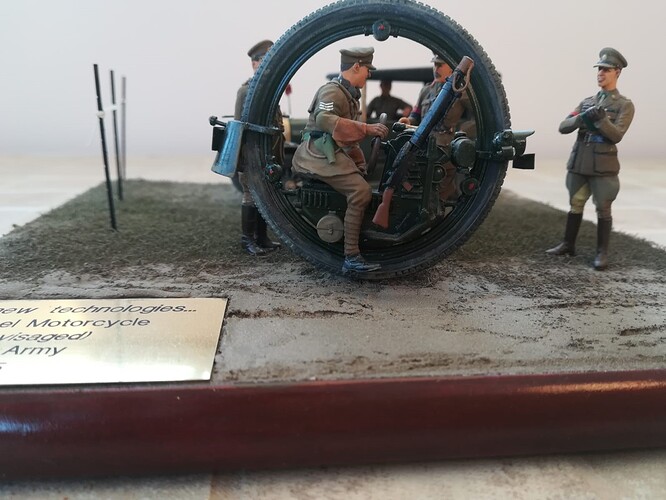 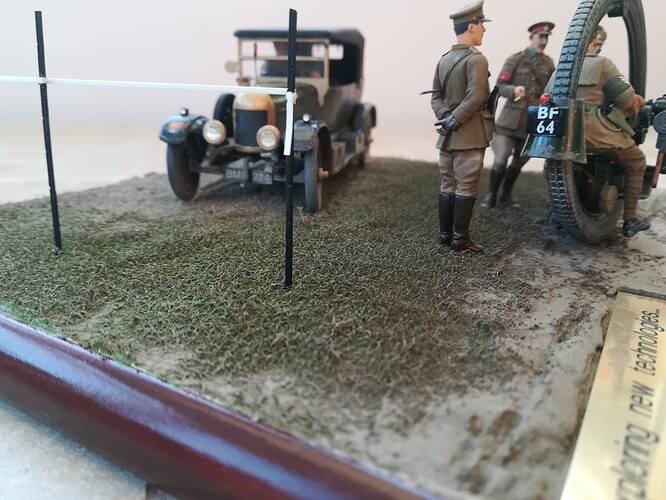 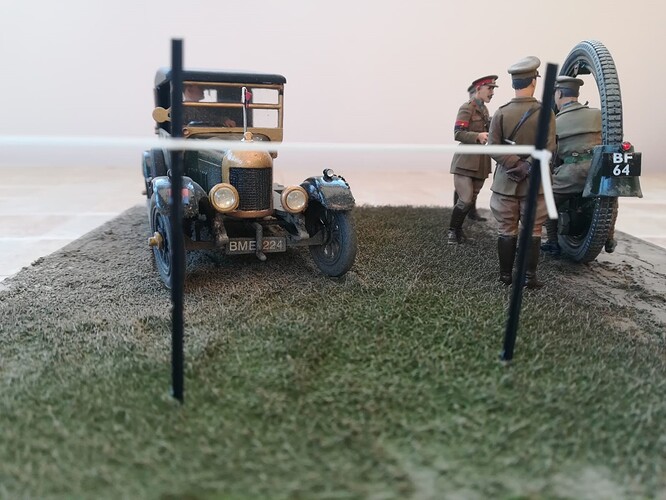 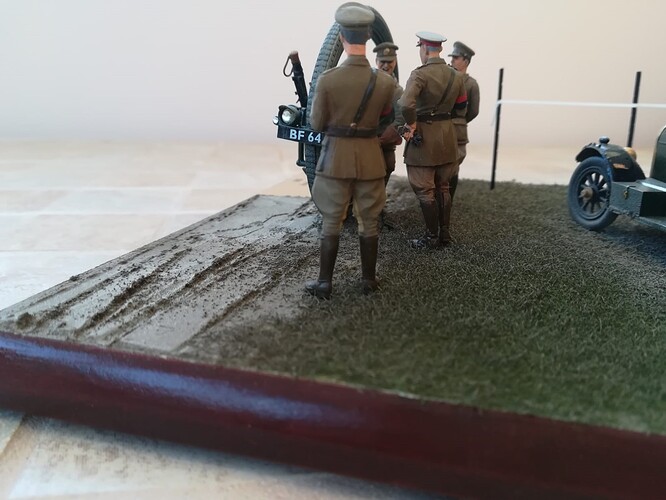 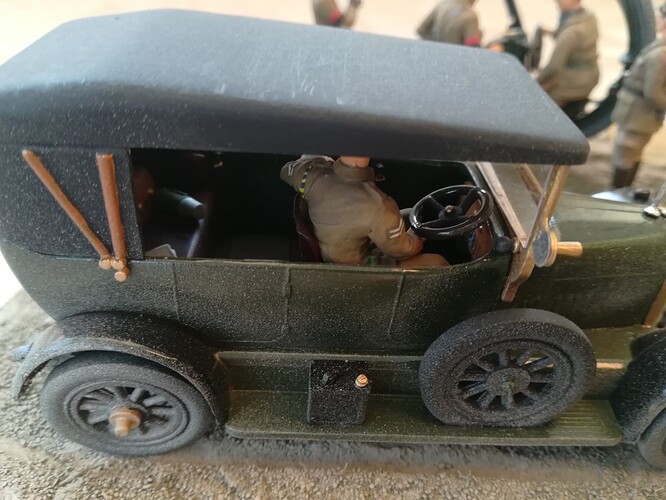 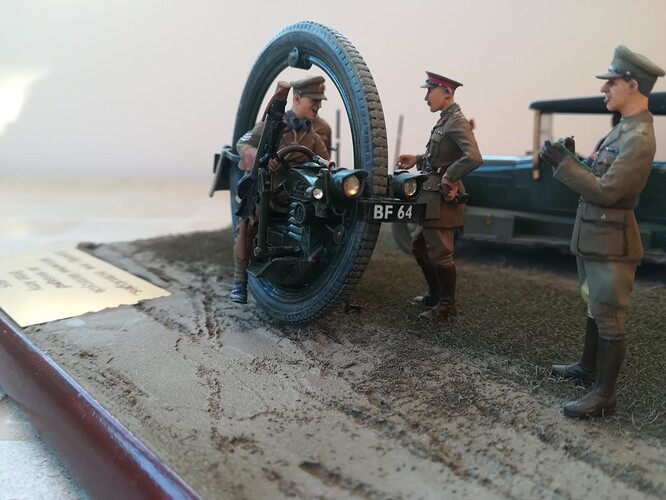 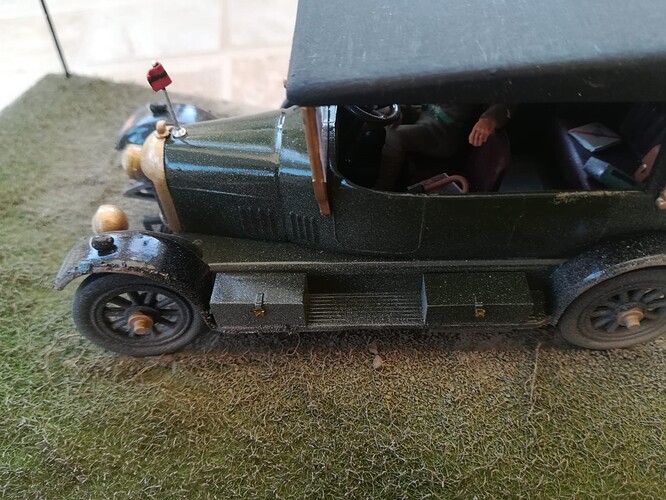 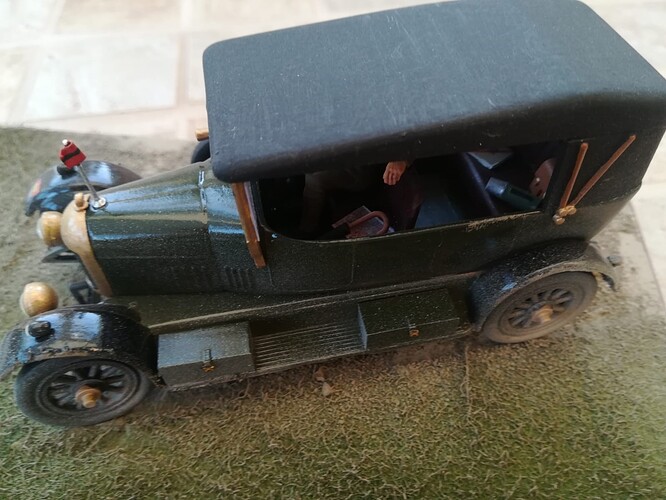 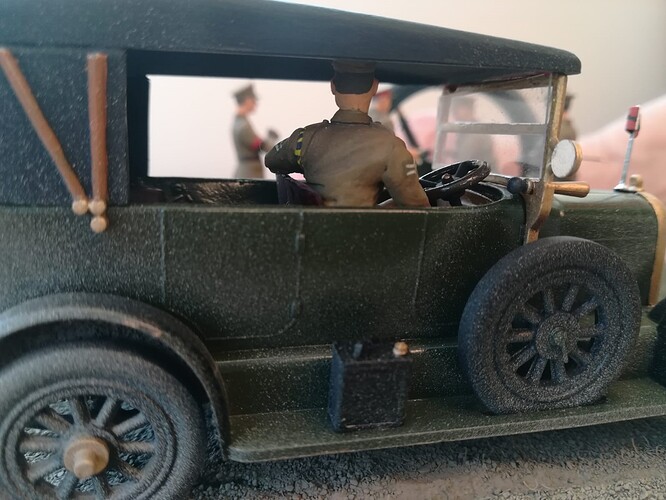 I must admit when I read the description I thought this was going to be really silly.

However it turns out it is really cool! Looks totally doable. Reminds me of General Grievous’ ride in Star Wars. Thanks for posting!

Thanks Nick; perhaps I should change the title - but I’ve no idea how to(!)

I don’t know if you can at your trust level. If you post what you want I or a mod can change it.

Thanks Ryan; nah, what the hell? My colours are nailed to the mast - perhaps though it’s just not interesting enough? Arguably, a title “Experimental Motorcycle” might have been better but I don’t really mind.

Thnaks for the appreciation.

Another bit of sublime Stodartiness if I may say so sir. . Spiffing job old chap.

Thanks Paul - very kind! I aim to please.

What a great little presentation. Really love the concept, story-line and the attention to detail — that mud is superb! As far as the title… I like it, as you’ve succeeded in drawing me in. Well done!

I remember an episode of South Park featuring a very similar contraption. Hopefully the control apparatus is different here.

Fantastic little slice of alternate history. Such fantastic attention to the little details too though- like the muzzle cover on the Lewis and the Thermos in the back seat of the staff car. That is what really brings a scene like this into life!

Thanks Karl; I was beginning to think that as Inter-War stuff it was a little too obscure (and perhaps I should have made the title a little more interesting), but it was great fun to build and I’m only sorry that WAR stuff appears to be hard to find. Thanks for the comments re the details. I just sort of logically realised that such an exposed machine-gun would get pretty fouled up without a muzzle cover so that was a relatively easy fix. I also had to check when Thermos flasks came into use but they were well established at the time of this scenario.

Wow what an excellent job, models figures the whole presentation is excellent. Very interesting subject too !

Thanks Richard - 'glad you liked it. I thought it had sort of sunk without trace so that was a pleasant surprise to find your comments!

I’m happy that I found this. I don’t know how I missed it in the first place. Maybe navigating the new site threw me off.
Excellent dio that tells the story without a written description being needed!
Very cool and unusual subject as well. Hard to believe this neat contraption was an actuality!
J

Thnaks Jerry - that’s very kind; 'glad I managed to come up with the goods under your scrutiny!

Well if the Russians could have their ball tank… Great little scene.

Well thanks very much; I do have a similar interwar German project up my sleeve but it involves extensive conversion of the secondary vehicle, so might not come to fruition just yet (my usual excuse!)