Gecko Models shows boxart and some CAD images of their upcoming 1/35 scale release.

This is partial text from the full article (usually with photos) at https://armorama.com/news/british-daimler-armoured-car-mk-i
3 Likes
Robin_Nilsson February 5, 2021, 3:21pm #2 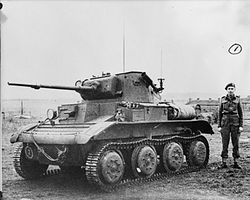 The Littlejohn adaptor was a device that could be added to the British QF 2 pounder (40 mm) anti-tank gun. It was used to extend the service life of the 2-pounder during the Second World War by converting it to squeeze bore operation. "Littlejohn" came from the calque, i.e. literal anglicization, of the name of František Janeček, the Czech designer and factory owner who had been working on the squeeze-bore principle in the 1930s and his son František Karel Janeček, who had brought his know-how to...

Oh My God! Kit of the Year! I built the 1\48 Bandai kit in 1976 and have been waiting for a 1\35 styrene kit ever since. Why hasn’t anyone ever done this, the coolest armored car ever made? Thank you Gecko, and please do a Mk. II! It has a full interior, no less, and PE. And today’s Friday! I have a weekend of bench time ahead! I’m a happy trooper.
Anybody wanna buy an Accurate Armor 1\35 resin Daimler Mk.II?

Gecko is certainly running down my wish list. If this keeps up, I’ll have to buy shares in the company to get a return on my purchases…

This is great news. Years back, when Staghounds and Humber armoured cars that this would be made.

Hope they make a Ferret too.

i don’t know how many times i wished some one would come out with this kit. i thought bronco might do something since they have the turret molds already. i think this kit will be a best seller… i know i’ll buy 2. Seeing this kit anounced today really made my day !

i have a accurate armor daimler Mk.II too i’ll probaly never build now, lol . i hope gecko
does a crusader or comet with interior…that would be awesome !

Yes ! Another one to delete from my wishlist . And now please, a Matilda I (A11)…

Now this is exciting. Ever since playing Post Scriptum I’ve wanted to build one of these!