I don’t know if anyone else has spotted this set from Red Zebra, but I see them as extremely useful: 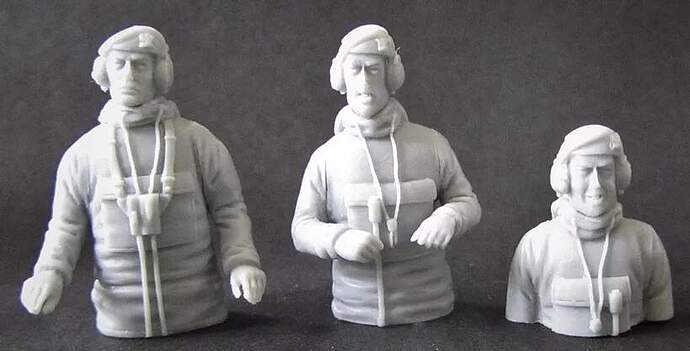 Their site is here and is well worth a look:

They look pretty nice. What time period(s) do these guys represent?

Gino, I’d say 70s and 80s, possibly a bit beyond as training stocks were used up. I didn’t get this type until around '74 so the Combat Arms must have had it some time before. My nomenclature might be a bit out as it might be a Mk 3 - my memory isn’t quite all it should be perhaps (and I can’t be bothered to Google at the moment!).

On exercise back in the day we seemed to have around 48 hours in normal combat kit then for the rest of the time, say 2-3 weeks - we’d be in these; when new the charcoal lining would impregnate itself into your face and neck and cuffs (and obviously any clothing underneath). Wearing the extra layer could be a boon in a typical German winter but no fun in summer at all.

The colour was a sort of grey-green and we fixed black name badges to our suits using the rubber repair patches with a rank and name written on them in Chinagraph pencil (yellow or white). There were apparently issue rank badges but I never saw any in my 45 years of service. There were also patches on the suit itself to take adhesive detector paper to enable blister or some other chemical agent to be identified. The kangaroo pouch on the chest was very useful for storing the NBC gloves and other items; I used to keep my watch and a couple of pens within mine. I didn’t acquire an issue watch with the extra long strap to facilitate wear over an NBC suit until some time later in my service.

Red Zebras stuff is ace. Have various sets and all of them have been flawless.

I agree with Brian about timescale, last used mid to late '80’s. I was one of the NBC Instructors in Sennelager training/testing everyone to head off for Op Granby and anyone who tipped up with one of these style suits was issued a MK4 suit to train in, generally DPM though there were some green ones around as well. I used to cut the charcoal lining out of mine for exercise, especially in summer because as Brian said it was a special kind of miserable.

Thanks for your support! I’ll report back a little more when I get some of these figures in my grubby paws. I’m not quite sure just yet what model I’ll fit them in but there’s quite alot of scope.

Did you mean one of these Brian ? 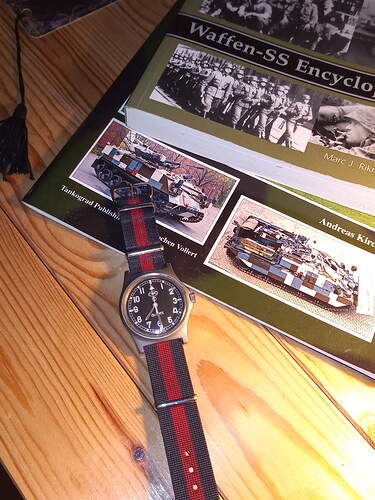 Ah…G10 for men haha. My son wears mine for work now, he’s a VM in the REME definately got the brains in my family. Nothing lightweight about stopping yourself sweating your back wheels off on exercise. God I hated NBC suits.

Haha is that even possible? No never done that.

I do indeed - G10 for Men! I acquired mine somewhat late in life - and sad old scrote that I am I have an OD strap, an RAOC one and an AGC one - just to suit my moods(!)

I do recall one comparatively luxurious exercise (in that we were given a 9 x 9 to sleep in), when one bright spark - the Bde HQ NBC Advisor I think - thought it would be a good idea to up the NBC State by tossing in a handful of CS of pellets; not a nice way to wake up. However, true to form we merely put our respirators on and carried on sleeping although of course, due to the canister if you sleep on your side your head is sort of uphill. I say “we” all went back to sleep, save one individual who had indeed doctored his canister. I think he puked solid for around half an hour - not that we heard him much.

Yeah, in through the filter to mask male connector with a medium screwdriver, give it a good old twist and wrench round and it opened up a clear airway… Not that I would approve of such behaviour

it’s ironic that at the start of the coronavirus pandemic, army surplus S10 respirators were going for as much as £270.

anyway I picked this little set and now that I’ve got it on, I’m just going to pop down to the shops…don’t you just hate it when run out of glue. 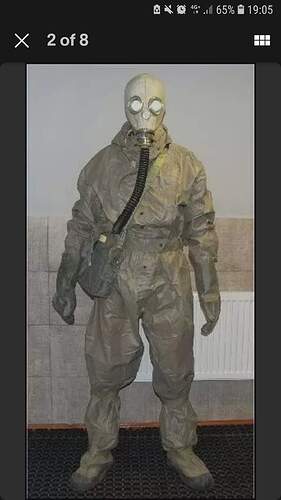 On the same site he has anounced making a new set:

For a while now, Ive been wanting to do a Syrian/Iraq style tank crew, from various photos, the kit/uniform is even more varied than 1970/1980s British tank crew (Still have nightmares re our NBC

I suppose this should really be in a News bit, but as I’ve already mentioned them here I thought I’d continue. I’m pretty sure now that they’re a Mk 3 suit.

I’ve just received my figures from Paul Wade at Red Zebra; very quick turnaround, a mere 24 hours from my order. These 3 figures look excellent to me (already described above) but with some extra details – such as boom mikes that come ready attached to some copper wire, and lengths of lead wire to facilitate the cabling. There is a simple instruction slip included in the set.

Although I haven’t a British project in the pipeline, I am looking forward to using these; they’ll look great I reckon for any models from the 70s and 80s. I can see them being a real asset to say, Chieftain, CVR(T), CVR(W), FV 432, Abbot, M109 series, Ferret and so on. As described earlier, during exercises we started always in Combat gear (British DPM) but within around 36-48 hours it was on with the NBC suits, and it seemed to stay that way for the remainder of the exercise. 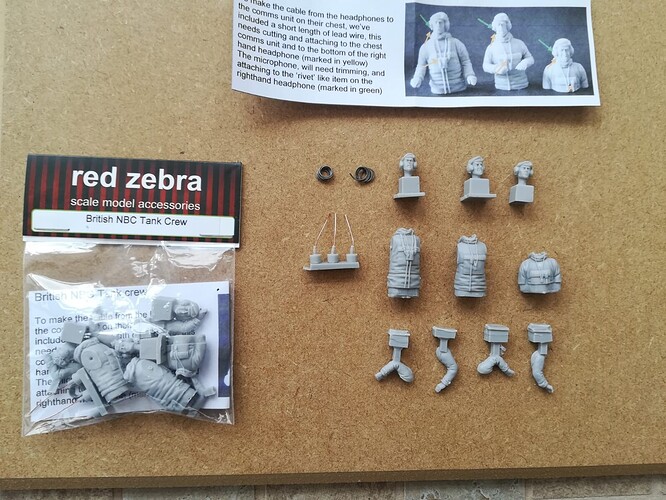 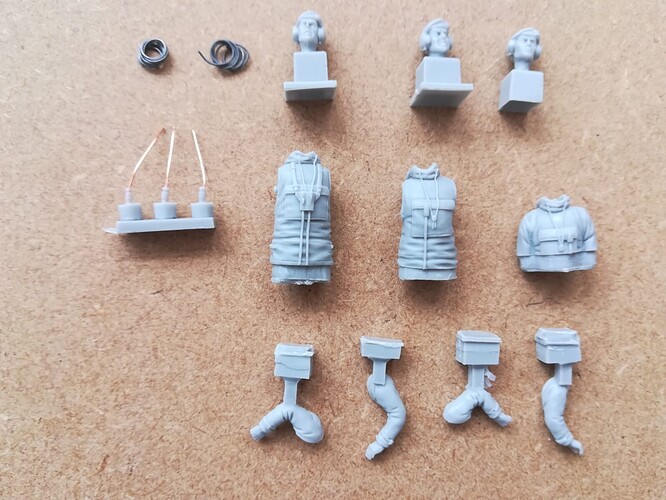 I think they are very good value at £13.50; as mentioned before, see Paul’s website:

Just a bump to push this up the list in case anyone wishes to see the extra details!

Is it me or does the fellow on the left look like Gregory Peck? Regardless, nice set!

I see what you mean (in the first pic at the top of the thread); however, and after a closer look at the component heads - he actually doesn’t(!)