I was going through my stash this week and came across a kit of a Ram Badger Tank from Formations models. Do I have have the name correct ? I was looking for a history of this vehicle and can’t find much. Was it used in Europe in WW2?

Im pretty sure it was a WASP flame thrower fitted to turretless Ram II in place of the hull MG.
My best guess is that yes, it would have been used in the European theater and defiantly during WW2
Im not 100% on it though. 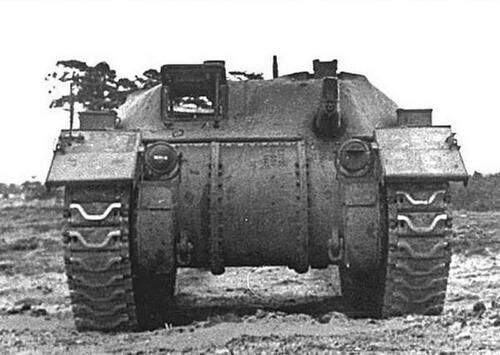 Here’s the page from Hunnicut’s Sherman book, giving info on the RAM badger. 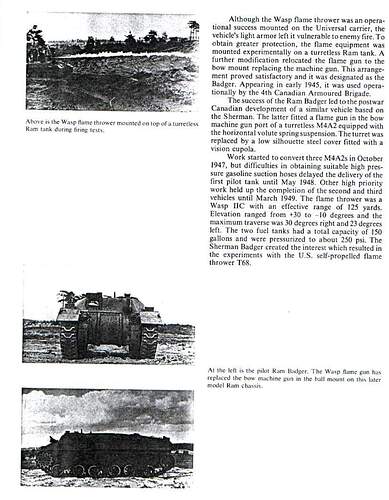 Sorry for the bad quality

You can also look at this webpage

And to top it, a Badger 1945 during the liberation of the Netherlands. I think it’s in Putten. Not sure about that. 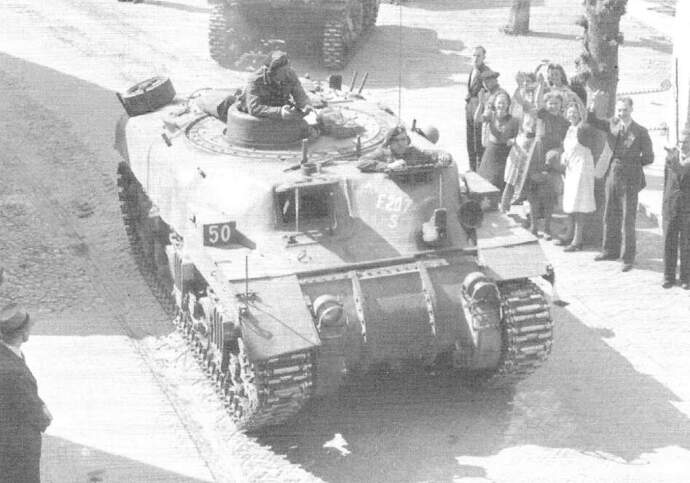 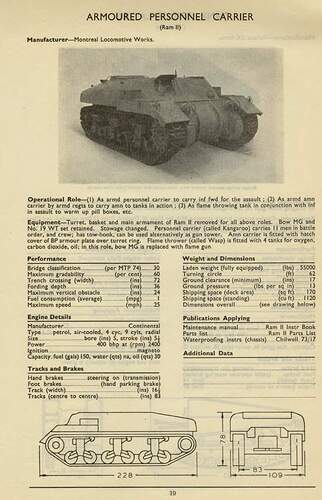 Thanks guys. I did see a statement that it was used in 1945 in Germany just not sure where.
Here’s another question: which one of the seemingly numerous OD colors would it have been painted ?

According to the wizard of paints him self

Later with the change to SCC.15 Olive Drab then the Canadian used the US Olive Drab no.9 since these were equivalents, NOT matches. A question about a Quad

Seems to be some confusion here. You must consider the chronology when deciding about colours schemes and patterns. The Canadian Army came under the same camouflage regulations as the British, Samples of the colours to be used were sent to Canada and...

He’s talking about a Quad here, but I’d imagine the rule would apply across the board.

Also thank you for sending me down this rabbit hole because I’m working on a Quad and this solved my paint question!

Thanks Arie. I noticed 3 bar cleat tracks on the vehicle too. Earlier pics show the steel chevron tracks….

And now that I sit here thinking about it….

Newly shipped from Canada it would have probably been OD No. 9 as Mr. Starmer has proclaimed however, if it was one of the Ram chassis that were already in use in England from earlier in the war, it would probably have originally been Khaki Green No. 3 and then repainted SSC 15 in ‘44 to conform with the new paint regs. So you should be able to get away with either or.

Hi,
The Badger with the chevron tracks would be a prototype according to Hunnicuts’ book. The 3 bar cleat tracks seem more appropriate for this kind of vehicle during end '44 and '45. But if you look at Canadian tanks of that period, the chevron tracks are also widely used. I guess you have to choose a subject, version that you want to represent and go with the pictures at hand to choose the right tracks.

Lol I just bought 2 bottles of AK real colors KG #3 for what I thought was a Ram tank I had in my stash. Turns out it’s a Badger so it’ll have to be late war colors!

Would be my choice also. I’m looking forward to the result. It’s a nice subject.

According to the 35th Rule of (Plastic) Acquisition you now need to add a suitably early war vehicle to your stash so that paint doesn’t go to waste.

@SSGToms seemed pretty happy with the Bronco Ram he built.

Yes I think I have one in my stash. I just ordered AK Sccc 15 for a Badger around ‘44-45. Still have to locate the tracks which I think I have. It never ends lol!

Arie are those T-49 tracks in that picture?

The Formation set is quite rare I believe.

Yes I dug it out of my stash during an inventory and it will be my next build after I finish some figures I’m working on.