Hi all. Hope no one has suffered unduly due to Covid. I’m just completing 10 days in isolation as my daughter caught it!
Anyway on to business. I’ve got a kit of a Jeep that I want to complete as a captured Airborne Jeep belonging to 1st Airborne at Arnhem. I’ve looked at a couple of sites specialising in these vehicles as well as my own books on the subject and I’ve noticed a couple of things. 1) The spare wheel in most photos is mounted on the front bumper rather than the back of the vehicle; 2) The windscreen appears to have been removed. Well I’ve already assembled mine with the spare on the back, I could remove it and remount it but wondered if any of 1st Airborne’s were mounted in the usual place. The mounting on the front seems to go with the Recce Squadron’s armed Jeeps and special purpose vehicles such as the RASC supplies retrieval Jeeps which had a “cage” on the back for wicker canisters. My reading of the specialised sites suggests that the modifications to produce an “Airborne” Jeep were:
Removal of windscreen
Repositioning of tools from LHS to front bumper
Repositioning of spare wheel ( but not in every case?)
Removal of some handles to make the vehicle narrower and shorter
Unfortunately most of the photos seem to show Recce or specialised Jeeps. According to the unit history, “Hohenstaufen” captured 150 Jeeps at Arnhem! They had to turn them all over to Skorzeny’s Panzer Brigade 150 for the Ardennes attack. 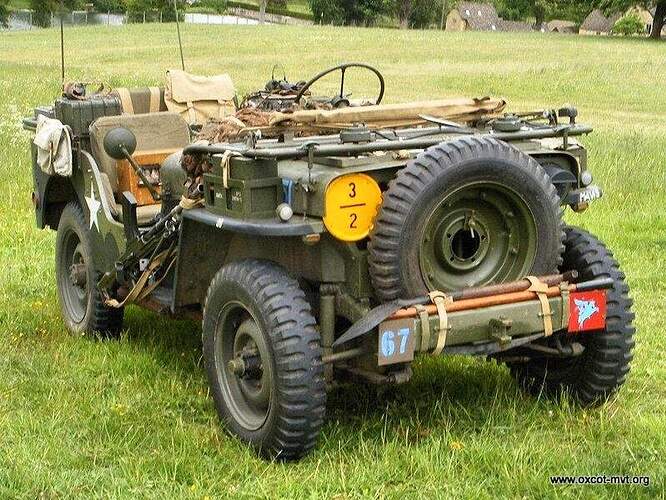 All Airborne Jeeps had the spare moved to the front to reduce the width. The front bumpers were also cut down and the tools moved for the same reason. This was done to fit them into the gliders used for the drops. 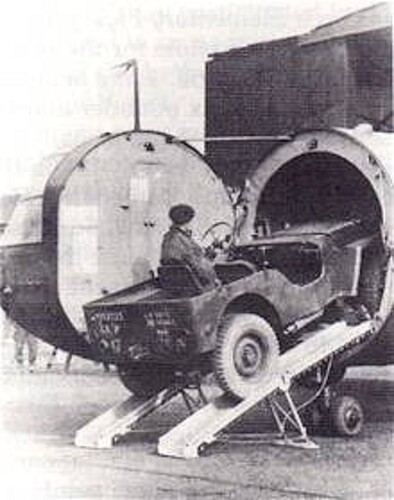 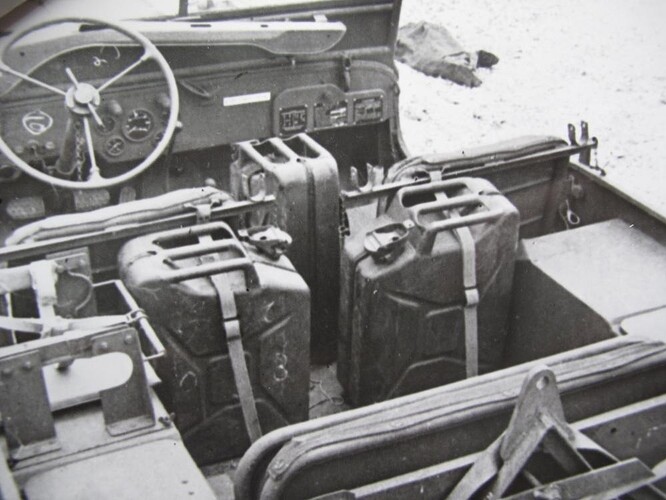 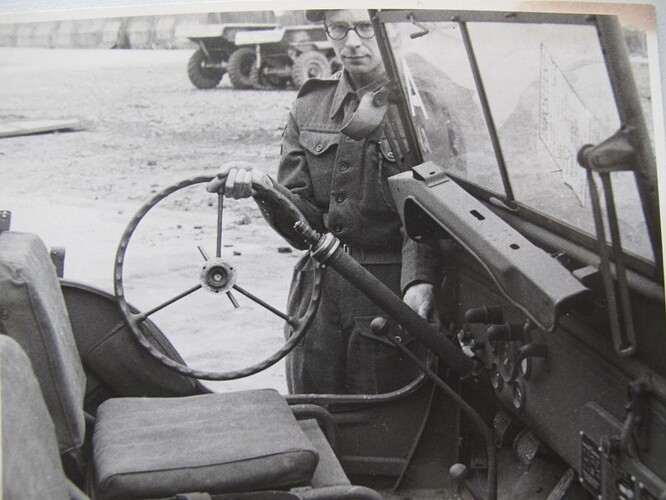 Have a look at the photos this link. Some British Airborne jeeps had the standard rear mount spare tire at Arnhem, as shown in the photos.

On a side note, the figure of 150 jeeps captured at Arnhem sounds awful high. Did the division TO & E have that many. Not to mention that some were destroyed in combat. That would mean 150+ gliders just for jeeps, plus all those for artillery pieces, tracked carriers, plus the troop carrier gliders for the infantry of the Air Landing Brigade.

Thanks for the link. Yes it looks as though RA, Signals and other Jeeps retained the spare at the rear. However they then need brackets and carriers scratched for the bonnet and wings! BTW, I also thought it unlikely that 150 Jeeps were captured at Arnhem, until I read this: Arnhem Jim: The Airborne Jeeps of the British 1st Airborne Division at Operation Market-Garden - 1944
Apparently the TOE of 1st AB included 904! I wonder what “basic AB configuration” looked like? Nearly all the available photos seem to show Recce, Signals, medical or RA configuration, which by definition would be in the minority. I think part of the idea behind the modifications was that a Jeep would fit in a Horsa glider along with whatever it was towing (gun, trailer WHY) and the crew. 2596 gliders were used in Operation Market Garden according to this: Glider Pilot Regiment - Regiment History, War & Military Records & Archives (forces-war-records.co.uk).

Thanks for the photo. That looks like a Signals configuration Jeep. I’ve found other photos that contradict some of the alterations to that particular configuration. I’m beginning to wonder if these may be more random if they are field modifications.

I won’t guarantee the caption is correct but… 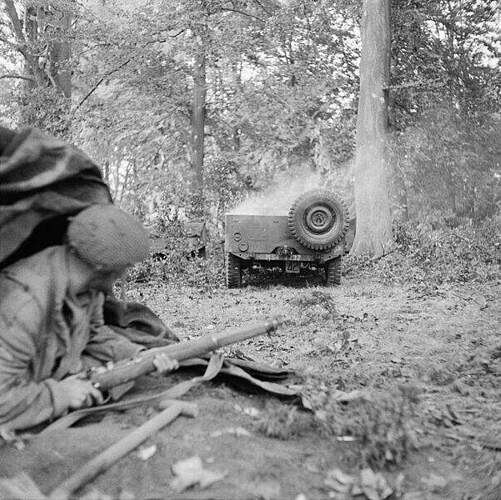 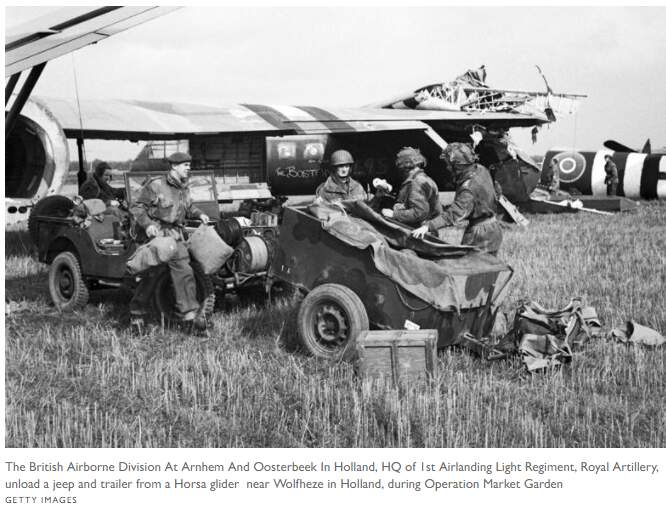 I think part of the idea behind the modifications was that a Jeep would fit in a Horsa glider along with whatever it was towing (gun, trailer WHY)

The trailer is probably a basic load of ammo for the gun. Otherwise it’s just so much weight with no purpose without ammo.

There are other loads, radio batteries and battery chargers for example. Very heavy and lots needed! If you’ve ever had to lug “Dags” around, you would prefer them to go in a trailer!

" Abandoned jeeps of the 1st British Airborne Division (General Urquhart) behind the Klompenschool on the Weverstraat in Oosterbeek, 25./26.9.1944" : 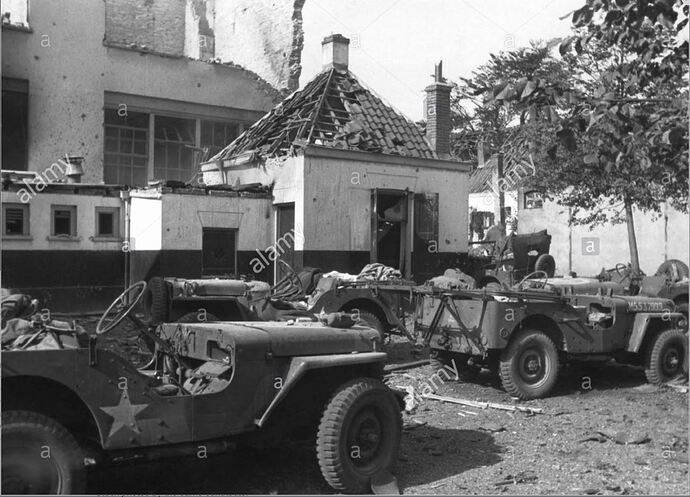 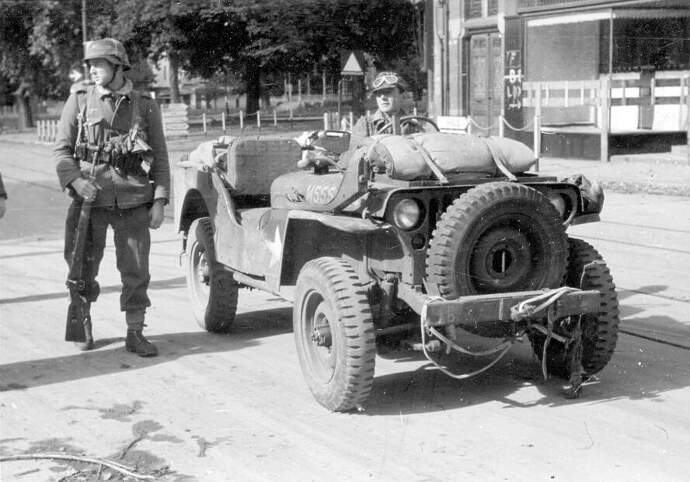 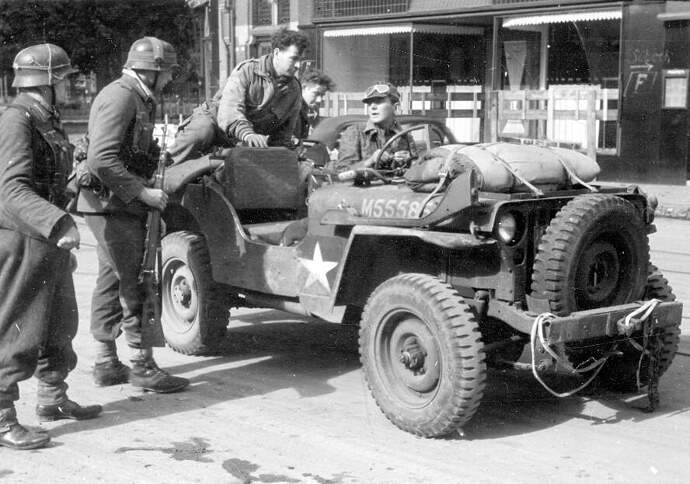 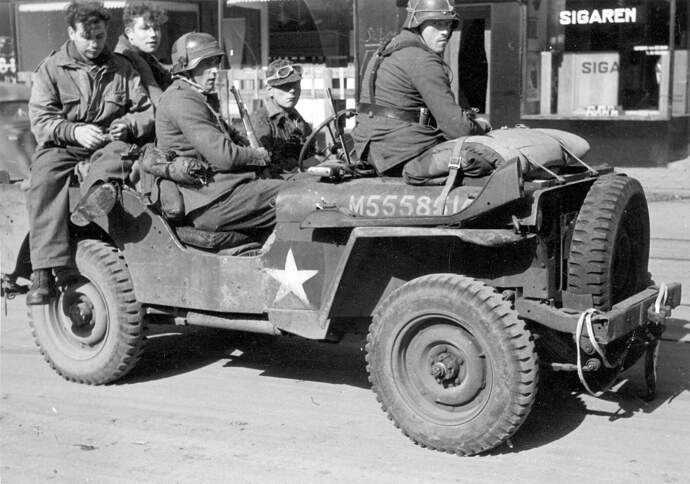 “Three German soldiers proudly pose with a captured Jeep and two British prisoners of war at Musis Sacrum, in the center of Arnhem” : 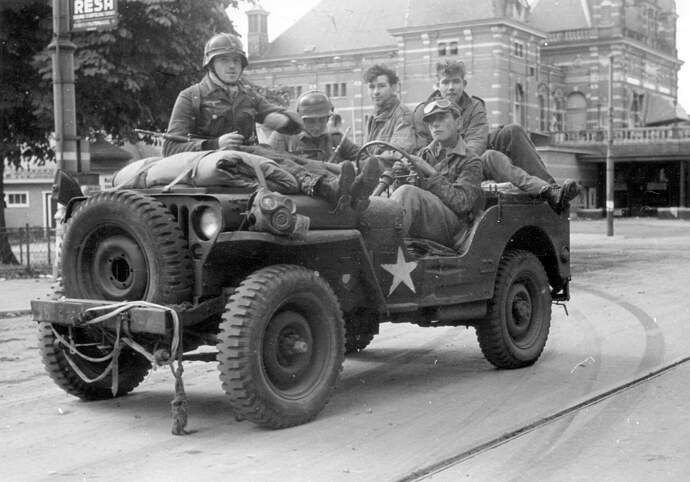 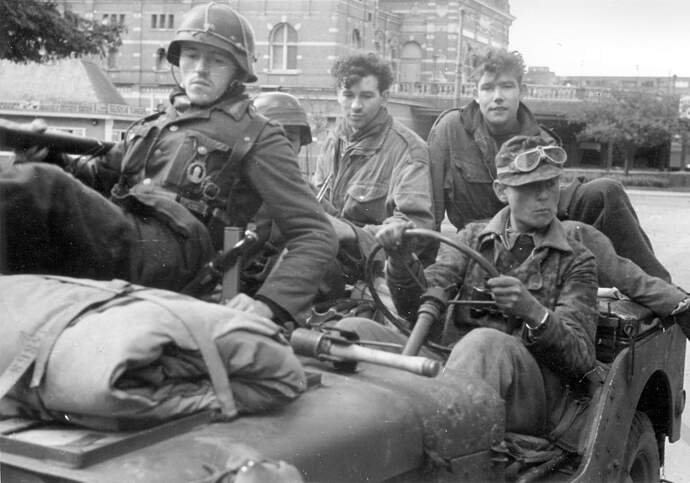 Yes, I saw that as well. So then I started wondering, how many were actually sent to Arnhem.
The first lift on Sept 17 sent up 320 Gliders for two LZs in the 1st Airborner Division. 38 of those gliders were lost en route, with 282 arriving at Arnhem.

On Day 2, Sept 18, 273 gliders arrived at Arnhem to complete the delivery of 1st Airborne Division. No mention is made of the number lost en route.

So in two days, a grand total of 555 gliders landed at Arnhem! Obviously the full authorized divisional compliment of 904 jeeps could not be delivered by 555 gliders. But, perhaps close to half could have been lifted by those that did carry jeeps. Pretty impressive for the airlift capabilities of that time.

Another captured jeep put to good use near Oosterbeek : 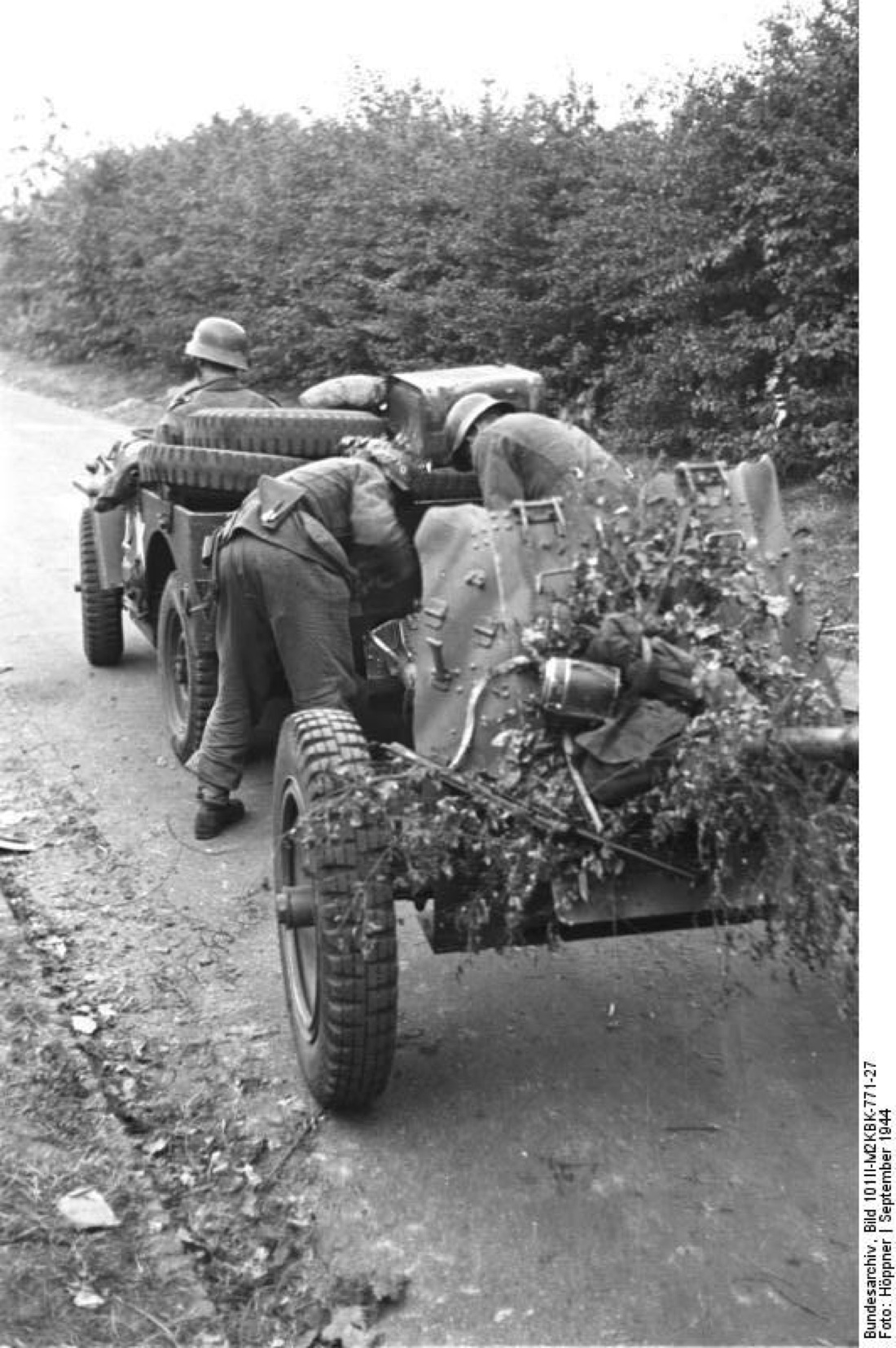 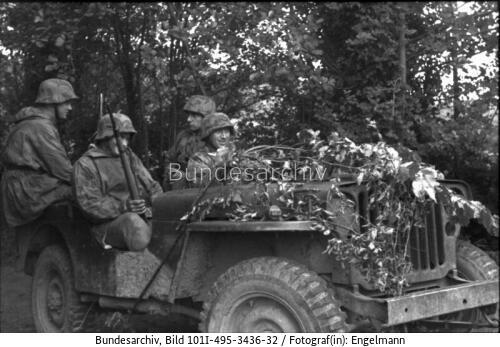 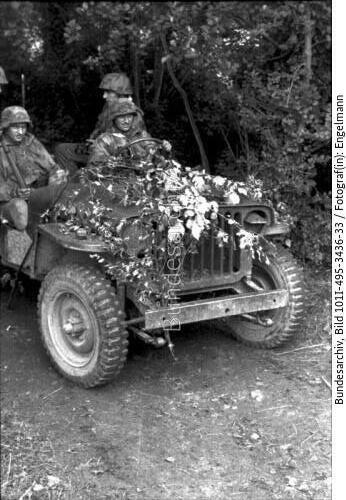 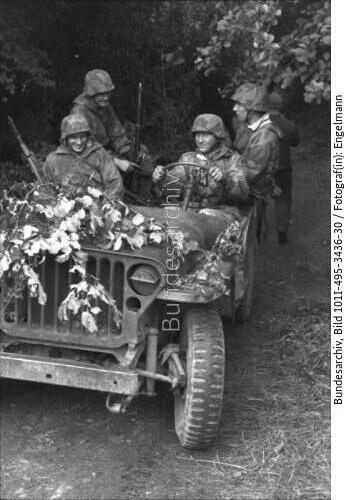 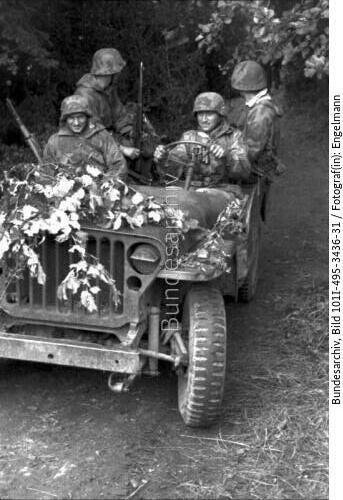 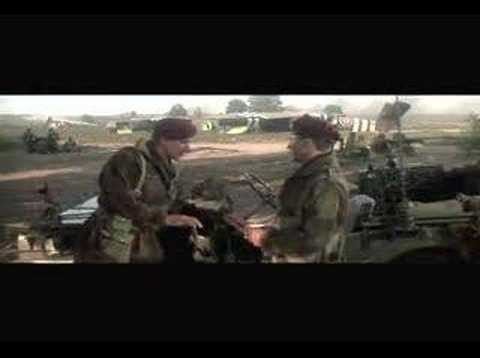 Thanks for the photos and additional information guys. I do have most of them already, but the sequence of Heer guys driving through the woods is new to me, it’s obviously Arnhem I’d say from the foliage, it matches other photos and is clearly an airborne Jeep. I also didn’t know the Steen sequence had so many photos in it, it’s usually only the last three that are published. I’m trying to make out the AoS marking on this Jeep. It looks as though the second number is a “6”, but I can’t make out the first. The background seems to be two colours, which would suggest “46” for the 1st AL Light Regiment RA, but I can’t see it as a “4”. The only other possibilities are a “76” for 133rd Parachute Field Ambulance, but this would be on a black square which I would think would show up more clearly, or a “56” for 2nd Para.

Some of those gliders would also be Hamilcars, which were carrying the heavy stuff, Bren Gun Carriers, 17Pdr anti-tank guns and the towing vehicles, the Morris Commercial C8. Could you get two Jeeps in a glider?

Could you get two Jeeps in a glider?

Two jeeps could be carried by a Hamilcar. But like you mentioned, those were slated for the heaviest gear. And there were far fewer Hamilcars than Horsas.

Load plan for the Airspeed AS 51 Horsa Mk I Assault Glider : 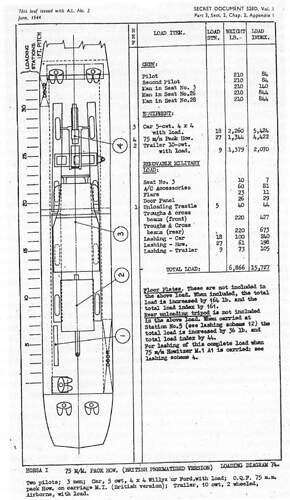 I wonder what the load plan was with a 6 pounder AT gun or for the other types of non artillery piece mover jeeps?

Another load plan for the jeep + trailer combo :

In addition, the Horsa could also carry a 20mm Polsten AA gun and a Royal Enfield motorcycle for good measure

This was the Jeep I was really interested in:
walter harzer - Bing images
The officer in the driving seat is Obersturmbannfuhrer Walter Harzer, the 1a of 9 SS Panzer, who, due to the fact that the GOC Oberfuhrer Sylvester Stadler had been wounded in Normandy, was in temporary command during Market Garden. He did a sufficiently good job to get the Knights Cross and promotion to command of 4 SS Panzergrenadier Division “Politzei”. He was also a “petrolhead” and was very interested in the captured Jeeps. He bemoaned having to surrender them to Skorzeny, because he said they were much better than what they were given in exchange!
The annoying thing about this photo is that due to the angle, you can’t tell whether the spare is on the front or rear! There don’t appear to be any extra brackets in the rear, or signals equipment, so it’s anybody’s guess what format its in.