Cat and Mouse (or 'Tom and Jerry')

Something else for you all to look at (and hopefully enjoy). Another attempt at telling a clever story.

It’s another diorama that I pulled off of my shelf – actually, about ten years old.

The story I’m trying to tell:
Tank engines are loud, so it becomes possible for one to sneak up on the other. In this case it’s a lowly M5, light – a mouse of a tank, named Jerry, who found themselves hiding just around the corner from a big, bad German Panther (cat).

Luckily for the Americans, The Panzertruppen are completely distracted by the air-war up above. We’d have called that ‘a lack of situational awareness.’

The US Master sergeant is trying to decide what to do about the situation. What do you think? 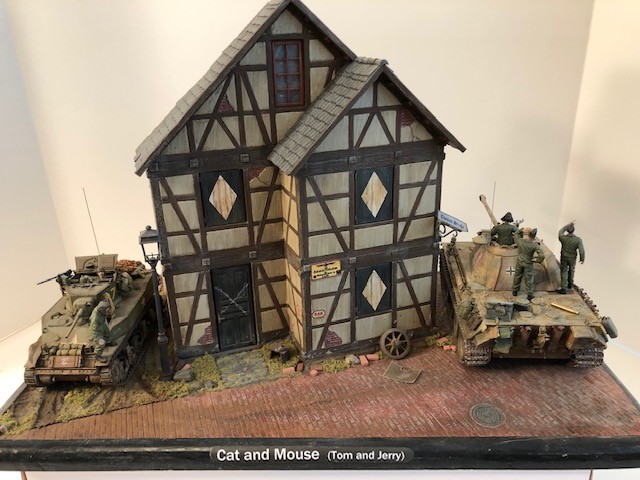 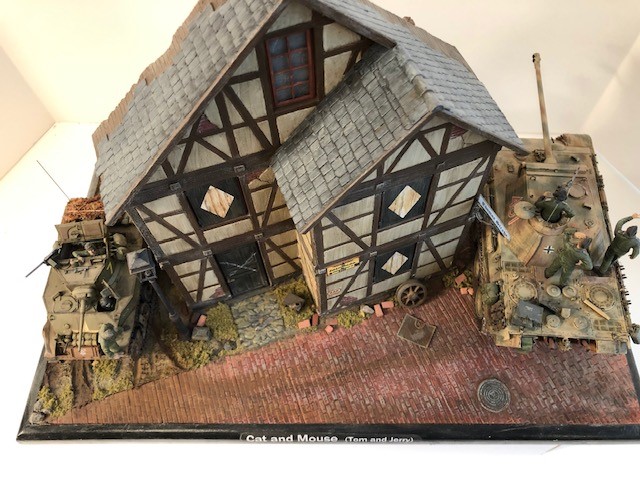 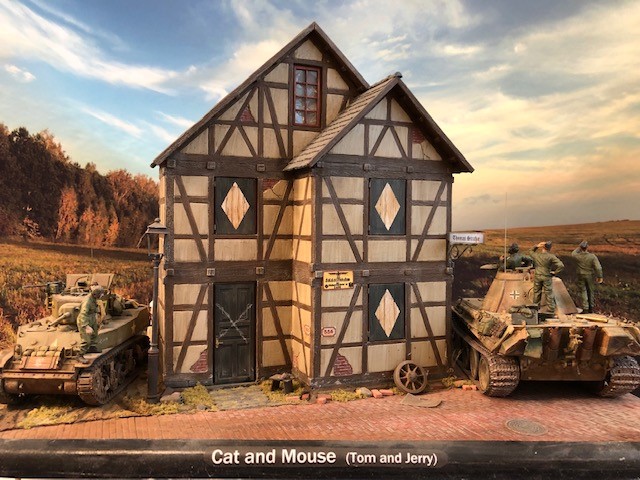 Even though it’s old, it’s a favorite of mine, as I think it’s just able to realistically show both sides of the battle, on one board.

If you’re familiar with my other efforts, you know that the base is wider than what I like, but necessary in this case. 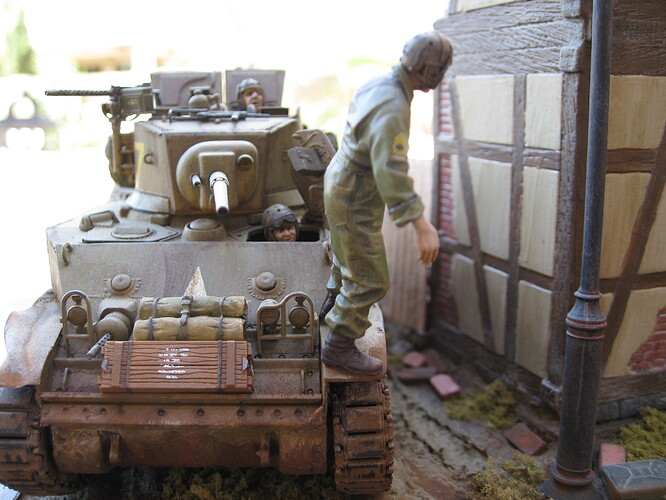 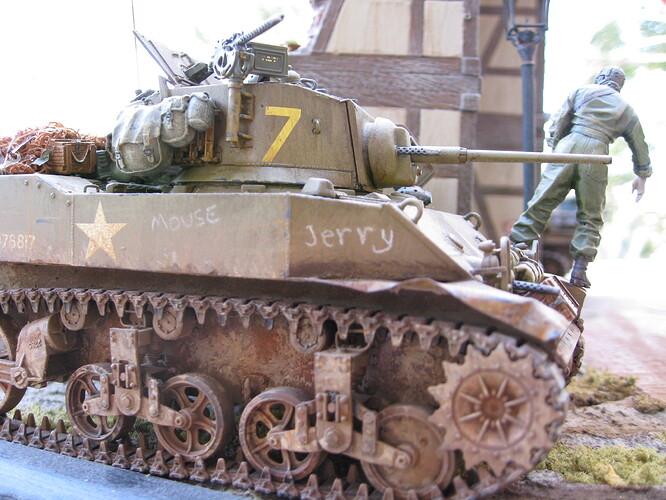 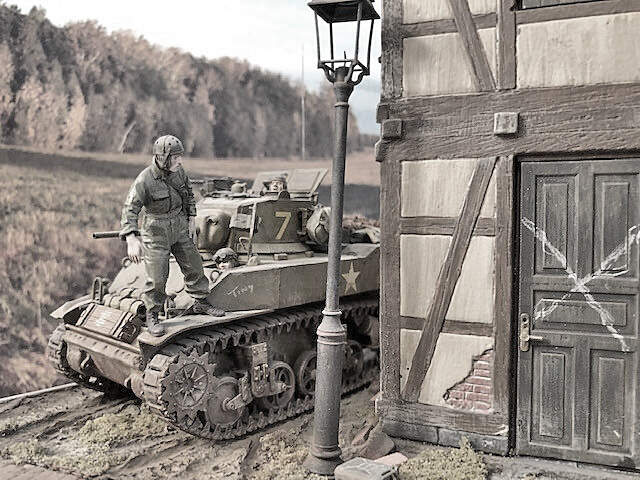 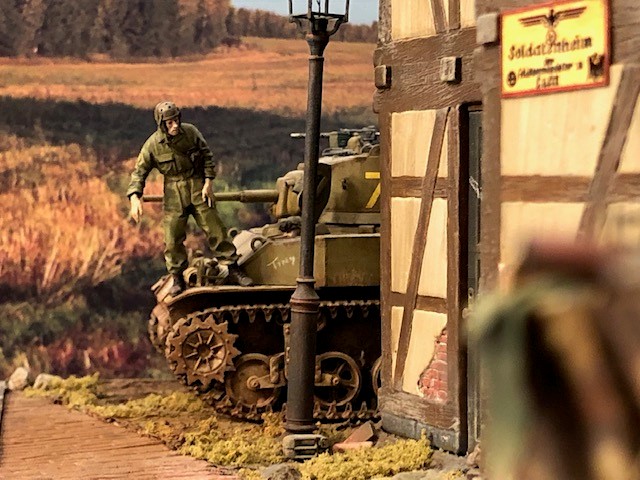 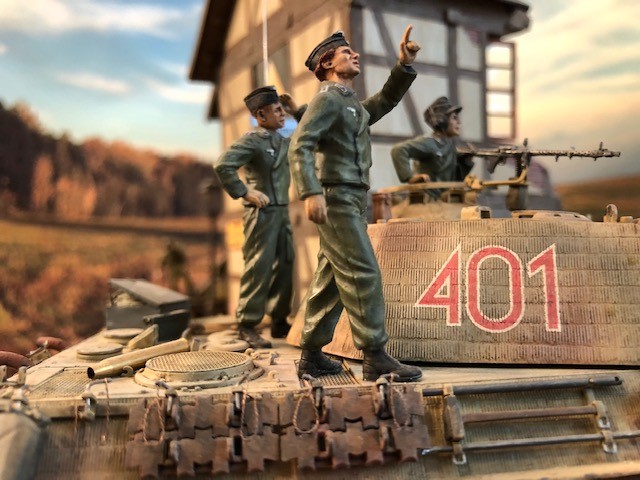 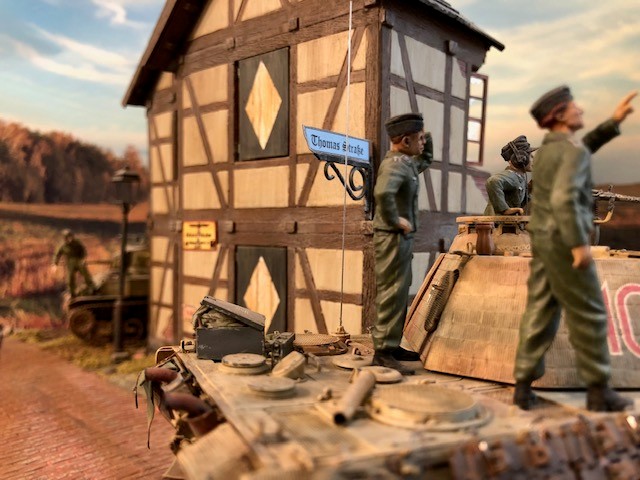 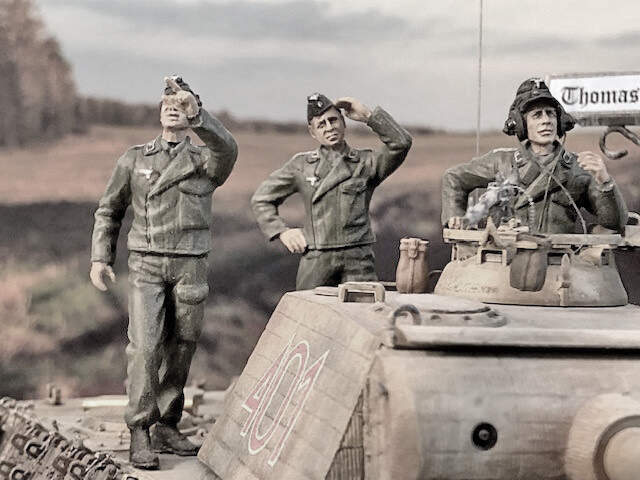 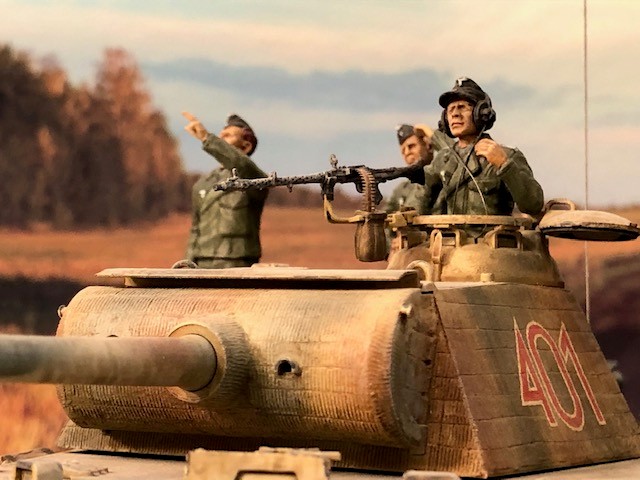 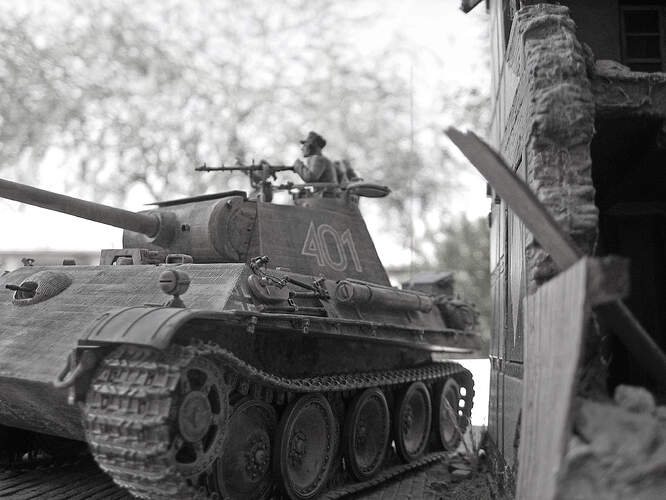 A couple little details I’m proud of: The Alpine figure’s pose was perfect to show the guy standing on the fender, leaning out to get a better look. The tilt on the panzer crewman’s head. The street sign, naming Tom (Thomas Strasse). The stencils on the military crates, always add a lot of authenticity, and visual interest. The American in the turret, asking, “what do you see, sarge?”

Details:
The Sargent is an Alpine figure, while the others are from Dragon, with Hornet heads, of course. That Dragon set is really a diorama in itself. Perfect!

The building is from MiniArt. I always battle to assemble them, but they do (usually) come out looking good.

I’m afraid I don’t’ recall which manufacturer’s Panther kit I used. I think I’ve built just about all of them, at one time or another I’m pretty sure that’s old Cavalier Zimmerit. I really miss their stuff…

As always, I find it fun to switch some photos to Black and White, to see how close they come to the real thing.

That was the best backdrop I had for those photos. Something more of a town scene would have been better…

The poses for the figures are great. I’d hate to be the M-5 or its crew as even though the Panzer crew is distracted I don’t see a happy ending for the ‘mouse’ once they are discovered.
Good diorama, good story.

The US Master sergeant is trying to decide what to do about the situation. What do you think?

Sometimes… Discretion is the better part than valour…

Really nice scene though. …but I think it’s time to bug out and get to that woodline…

Ya know… at that distance, and being on the rear flank, the M5 actually has something of a chance… at least for a mobility kill. The Panther had thin side armor…

That’s a neat scene. Reminds of something from the Haunted Tank comics.

Ya know… at that distance, and being on the rear flank, the M5 actually has something of a chance… at least for a mobility kill.

I agree, the TC can take out the other TC first with a personal weapon and the other two exposed folks while the tank is putting a few rounds in the engine and rear turret.

Not to mention that the Panther would have to traverse that turret 270* in the opposite direction to try and engage. If the M5 tries to run without engaging, it’s dead.

I remember those Haunted Tank comics, although they hadn’t occurred to me when I put this together.
Thanks for the memories…

Wow shed-loads of work Ralph (dare I ask how long this took?) but so worth it, and the 5th & last photos worth framing. Superb, love it!

@Dioramartin It was a while ago, that I built that one.

I usually break my projects down into four phases. The model(s), the buildings (if any) the base and the figures.
Unlike when I built software, when everything was measured in man-hours, I can only estimate in terms of calendar weeks - about one week per model, building, base or group of figures. In any given calendar week, I probably get in about 24 hours of actual, focused work-time at my table.

Does that make sense? Does it match-up with you’re experience? Anyone else out there?

(FYI: Back in the day, it was common in the industry to assume about one line of ‘thoroughly tested code’ per man-hour! And the complete systems could easily contain 100,000 lines of code. Things have improved over the years, of course, but MS Windows v10 has around 50 Million lines of code!)

In any case, thanks for the kind words…

No worries it’s a beauty. Yeah I was thinking when I asked the question it might be difficult to express the answer in any meaningful way. So if 24 hours per “entity” and you’ve got 4 or 5 entities there, somewhere around 110 hours? Pretty much in line with my own estimations, when working on something specific around 3+ hours per day – typically anything longer isn’t possible anyway because of drying times for glue or paint unless you can move to another sub-assembly. How’s this for scary – even if I use only 2 hours per day as an average, since starting Anthropoid in March 2018…2 x 365 x 3.3 = 2,409 hours. But I think the truth is more like 3,000 hours…and counting. So, if we were being paid by the hour…

There is so much to see and like about this . Very well done indeed. The detail that really stands out and is possibly my favorite is the boarded up windows , they add great contrast and add so much to the story without being obtrusive on the story.
Also the plight of the crew adds thay edge of your seat urgency .
This is very cool .

Oh man I absolutely love this. It’s darkly humorous but it’s not funny at all, if you know what I mean. This is so well executed. And everything - the figures, the tanks, the building - is so well done. Excellent. It’s all so perfect and the message is immediate - but the deeper meaning takes a minute to sink in.

Yup, your Anthropoid project is an epic. I’m watching…. I’m afraid I’d loose interest. There have been times when even on my small, dioramas, I get anxious to start on something different even before I finish my current project.

Thanks. I wasn’t sure if that old cartoon series was still around, or if anyone would remember it. But it fit as a part of my inspiration. An important part…

I love the story of this diorama and the fact it leaves you wanting to know what happens next.

I wasn’t sure if that old cartoon series was still around, or if anyone would remember it. But it fit as a part of my inspiration.

I did… but on seeing the title I was thinking perhaps Tom would be British, as in Pvt. Tommy Atkins… Jerry is obvious.