Towards the end of it’s life, the Australian Army was looking at replacements for our Leopard AS1 tanks. According to sources, Army looked at a number of options including the Challenger 2.
I’ve always wanted to do a what-if of one of these in AusCam. Given the dense scrub environments we exercise in here, I would imagine our Challenger’s would’ve been fitted with the standard skirts a-la Cr1, along with other standard fit components, as opposed to anything desert specific.

I have Trumpeter"s Op Telic kit but I’m not familiar with any other earlier offerings of the CR2. Therefore could someone please direct me to a suitable kit that I can use?
I also considered RFM’s recent kit (which I have) but thought that may include more up-to-date bits which probably wouldn’t have been on Cr2’s we would’ve bought nearly 20-odd years ago.

Shaun, the RFM kit would be fine. 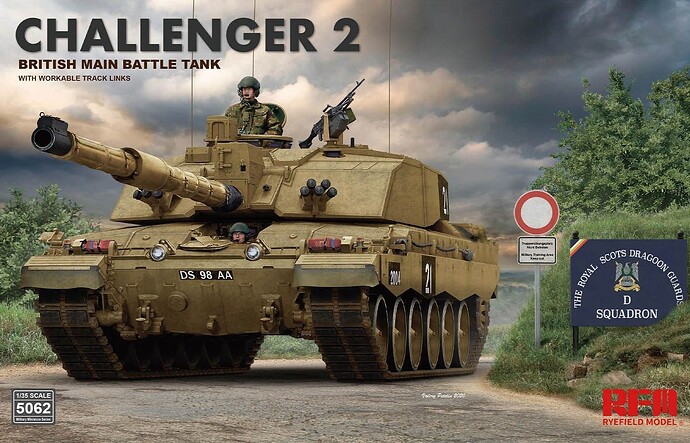 All you would really need to leave off is the add on armour slab that goes on the belly of the hull. And maybe use the early version of the FFE without the protective covers over the handles as I am sure the very early Cr2 did not have them, would have to check that though, but that one isnt a biggy.

Yes, What John said Shaun. The Tamiya one is very basic. RFM is your best kit. it may be three times the price as the first release Trumpy one and twice the Tamiya , but it is well worth the money.

All Aussie vehicles have home grown elements to a certain degree, and as a what if, it really does not matter what you add or leave out in general terms.

The Centurion Mk 3 and 5 s we bought were upgraded many times during service, in line with what the British were upgrading their tanks with. So taking the RFM kit and building it as is with newer equipment items, would not be outside possibility.