Chaps, I picked this up from the BBC News site:

To cut to the chase here’s one of the images: 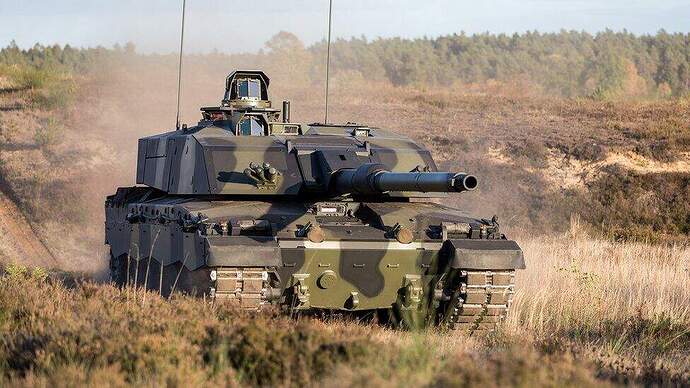 A mere 148 tanks is derisory but then I remember when the British Army was strong and powerful, not the shadow of its former self which it now is, however, beyond the topic itself perhaps!

Now, as it happens I also blundered across a model on Track-Link AFV, which refers to a resin conversion kit made by “Scottcast”; I immediately purchased one.

However, the link to Track-Link:

This upgrade has been rumbling around for some time. Sadly it replaces the excellent British gun with the Leopard 120mm cannon for no real increase in hitting power - going over to single-piece shot with all the handling and stowage issues it brings. Be interesting to see if they go over to ammo stowed in the turret bustle, since Chally & Chieftain had all the “bang” stuff safely below the turret ring. And don’t even start about numbers…

I hear sniveling, look at the Tank numbers for the US Marine Corps and think where this road could go.

Sorry Greg, I’m behind in military current affairs (never used to be when I was still serving mind!) but do you mean that the USMC has few tanks?

Well, I spent quite a few years using the 120mm and can tell you that its a fine, accurate and reliable weapon. Using two piece ammo is quite archaic and slow.

The USMC plans on getting rid of their tanks soon.

2 armoured regiments worth with a very small training, spares and war reserve stock. Jesus wept…
From the country that gave the world the tank, but then given what they did with the Harrier fleet I suppose its not a massive surprise.
Here’s hoping the new cyber units will be sharp enough…

So, about a WWII Commonwealth Brigades’ worth? I am imagining the phalanxes of Churchills and Shermans thundering across the flat farmfields southeast of Caen during Goodwood. Sigh.
Still, a brigade is better than zip. Glass half full as it were.
J

From an aesthetic point of view, that looks flatter and fatter than other modern MBT’s - like a box to ship an Abrams in.

One of the initial issues was the UK Mil did not want the Rheinmetall 120 as there was the idea floating around on an auto loader being introduced and another was the issue of the HESH/HEAT rounds which UK don’t produce much of if any now and a Belgian firm were sourced for it.
The L30 charm is probably the most effective tank gun going at the moment.
This is money led sadly as are most things the UK government do… And they do not listen to the military… Sadly.

I know I posted this in the 1:1 Tank Talk but but any interest in the resin conversion kit I alluded to …?

I’m happy with good old Chally2 for me Brian… Plus I’m too tight to fork out £45 … And I prefer the L30 Charm gun … Being an old fossil lol… I’m sure the remaining ones will be sold though… And now it’s been announced, I’m sure someone will be doing it in plastic sooner than later …

I do take your point John; everytime I fork out for something expensive in resin, or (perish the thought) undertake something tricky as a scratch-build, it coems out as an injected version. Hoever, just in case I thought I’d grab one; as to when I’ll build it, hmmm…

If the UK wanted to trade down from a better gun, HESH round, and safer ammo stowage to get a cheaper deal why didn’t they just buy Leopards?

Being a cyncial bastard, probably because the MOD wished to appear - for once - as being “British”, or to perpetuate the fiction of supporting British industry.

Yeah I know, I really shouldn’t appear to be so bitter and twisted at my age!

Mind you, from a modelling perspective, a Brit Leo 2? Hmmm.

Will it be a totally new tank or will they reuse existing chassis by giving them a new or refurbished turret?

Taken from the article(!):

"There will though be fewer of them. The British Army has 227 ageing Challenger 2 tanks. Only 148 of them will be modernised and they won’t be entirely new. The Challenger 3 tank will use the existing chassis, but it will have a new digital turret and smoothbore gun. It will also have a more powerful engine.

Will there be risks in bolting on new systems to the old? A similar plan to upgrade the Army’s Warrior Armoured Vehicle didn’t work out. That programme’s now been scrapped.

Ben Wallace insists it won’t happen again. He says the Challenger 3 tank will deliver the most lethal tank in Europe. It’s due to come into service by the end of the decade.

In reality, designing an entirely new tank from scratch would have cost too much and taken too long. While buying a tank from another country - without creating British jobs - was clearly politically unpalatable."

Can’t say for sure but I would imagine the hull will be reused with updates and upgrades fitted as needed and a new turret which is what we had done with Warrior and it’s 40mm CTA turret, but apparently that has been put on hold. This one at least looks like it has a new gun, I’ve seen the previous design in Lulworth many moons ago and although it was a smoothbore it had the same fume extractor, thermal sleeve and MRS system as current Challengers. Ammunition will be significantly cheaper also as just about everyone uses the same ammo. Only us and Oman use our current ammo which I imagine makes it very expensive.