I’m working on the turret of my Chieftain, amongst my research photos I’ve found 3 options regarding the area behind the cupola - 1 - No cover, 2 - Rectangular cover, 3 Rectangular plus cover.

Seems the no cover situation applies to early Mks, the other 2 appear on later vehicles - Mk 10-11.

Does anyone know what Mk they were introduced to? Is it part of the Mk 6 NBC pack upgrade?

And of the 2 shapes, which came first, or does that depend on who built them - RoF versus Vickers - or the like? 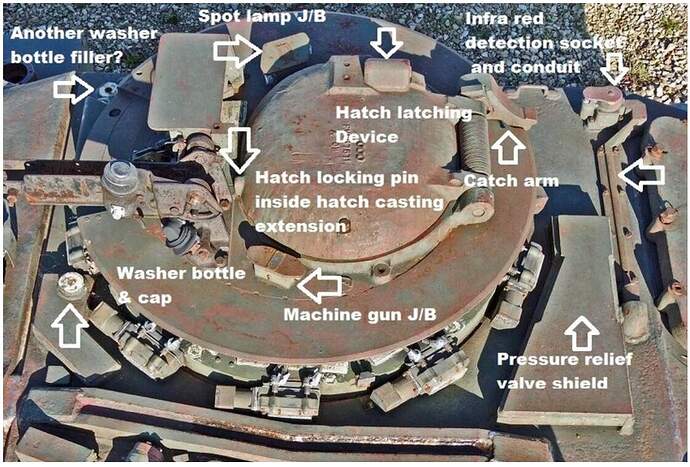 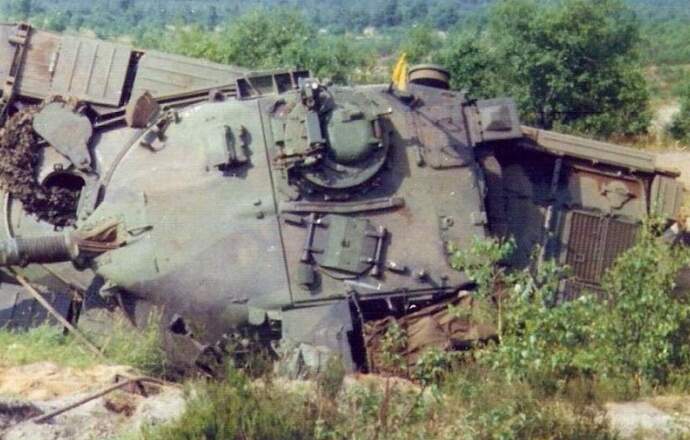 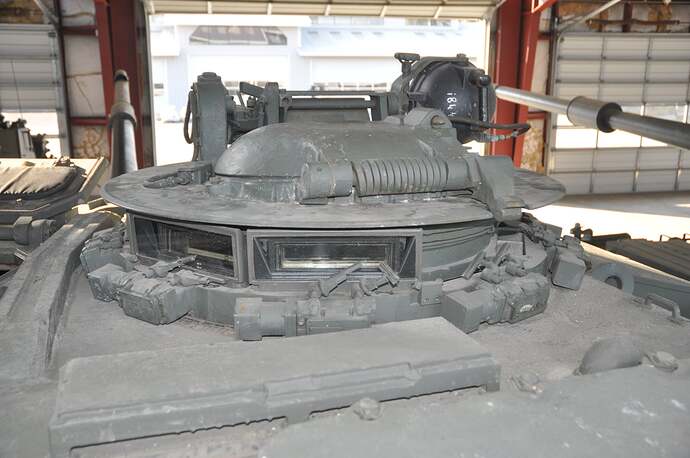 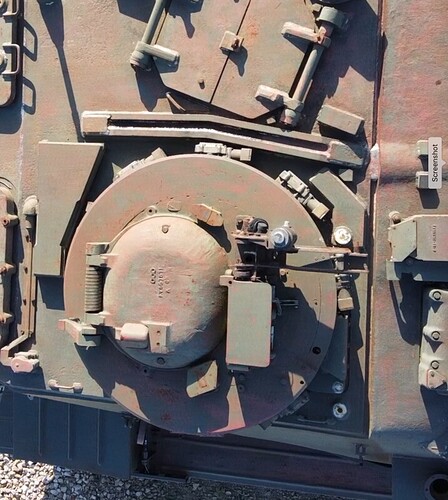 The rectangular one is definitely later. I found it on Mk 7s (along with the APDS bin) in 1987 while 6s retained the larger one. I confess that I didn’t look at the 1/3 and 1/4 in any detail so couldn’t tell you if those had one.

It doesn’t appear to have been changed once one was fitted. Logically it would be on all with an NBC pack (so all of them) but the No 6 pack was fitted or retrofitted to everything from Mk 2 to 5 and their later iterations so I don’t think the rectangular one was linked to the No 6 pack per se.

Having said that, you have a turret there which looks to be on a 2 which doesn’t have one at all, so I’m going to revise my second para. I was concerned mainly with the 3 onwards so never looked at the 2 much.

Thanks Rob
Photo’s of that area on early Chieftains are fairly rare, though have been looking through my reference and found a good one of a Mk 3 with the option 3 version.
Now just need to hear back from the owner of the one I’m modelling, so I know which option to build.

Mal
Forgot to mention - what looks to be the stand for the MRS light source box beside the gunner sight, perhaps this was before general installation on later Mk 5’s? 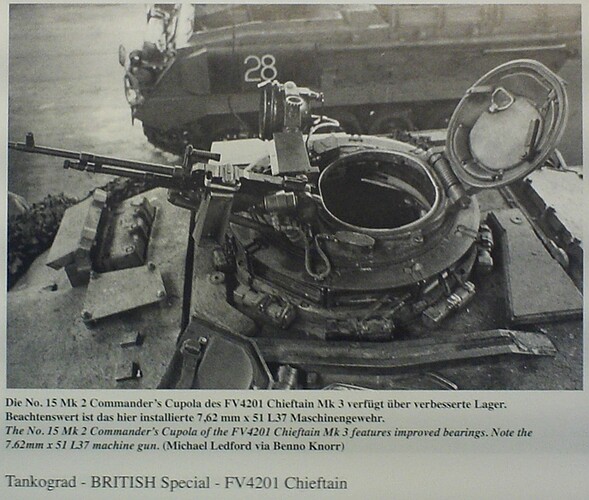 That cover plate was to cover the hole intended for the light projector when the vehicle was fitted for IFCS but not yet with it. It appears on reworked wagons but not sure if the 5 was fitted with the light proj during the original build. It obviously uses the mounting points for the projector so that presumably it could be installed later (by units?) when available.

Hi Rob
I’ve had another look at the photos in the Tankograd FV 4201 Chieftain book, there are actually quite a few photos of the mounting plate in place, with no light source box, nor MRS installed, ranging from Mk 3 - Mk 7, only starts to appear on photos of Mk 9 and up with both RMS & Light source box. They’re a lot less obvious than that photo I posted above, though given the limited sample size probably doesn’t give a true indication.

I’d expect to see the light projector when MRS was fitted (so L11A5 barrel with the slimmer fume extractor) as they worked together but obviously the barrel might have been replaced first or conceivably the projector fitted first. It wasn’t necessary for IFCS to be fitted for either to be present although I am pretty sure they would both be in place by the time IFCS was installed.

Yep, more turns than a twisty thing…
Going by the photo’s I’d guess that due to the L11A5 & the Light Source box both being cast items, they’d take a while to procure. The mounting plate look’s to be a quick welding job, so could be implemented quickly. Working theory till further info received?

Interesting topic to follow guys, sadly I can’t really chip in anything on this one… While I was on Chieftain all those fittings were there… And to be honest, most things like that were baseline fixes and upgrades, we just got the finished item… And I was to busy on the inside of the turret avoiding being mangled by the turret ring monster or my knees being crushed the breach bouncing around on travelling stab lol…that Tankograd Chieftain, Challenger and BAOR books are on my to get list

Hi Johnny
Different times, different priorities. What’s interesting from my point of view is that neither of these issues appear in the books I have. nor any of the forums I’ve looked at.
Reminds me somewhat of the early M41 - the first 257 built - which are mostly ignored in the various reference books.

Hi Mal, I think a bit of it will be like I said, a lot of these minor mods were done on base overalls and sometimes a few would be at regimental level under guidance from base workshop units. Some would be so minor that a lot of the time they go unnoticed and not much, if any attention is made to them (even by crews for some of the more obscure things -such as the PRV armoured cover etc) It just needs a keen eye like yours from time to time to notice them and get the right people interested who that little gem of info like @RLockie

I don’t think the L11A5 was cast - casting gun barrels went out in the 19th century. Too much bore pressure and need for precision and consistency.

From what I recall of the light proj, it was fabricated. It was attached with four bolts to the sockets welded to the turret roof, so removing the plate which was attached the same way and replacing with the projector was mechanically fairly straightforward. The cable would need to be connected to the electrics somewhere so there would need to be a cable on the inside for that and that was no doubt part of the work done during overhauls.

Vehicles would tend to return from base overhaul with whatever the current mods were installed (or prepped for fitting them when available) and the crews would not always know what some of the mods were for. I only learned a few weeks ago what the purpose was of the ones I asked a crew about in 1987…

Hi Rob
Yes, you’re right about the barrel, its forged - there is a photo of the red hot short blank in one of my Chieftain books.
Oh, what part was that?

I’ve been checking my Ref photos, having decided to build both the Rectangular & Rectangular Plus PRV versions - when I find out which version the Huntly Chief has, it’ll be ready to go.

They are quite different the Rectangular one appears to have the vents at the sides & rear. 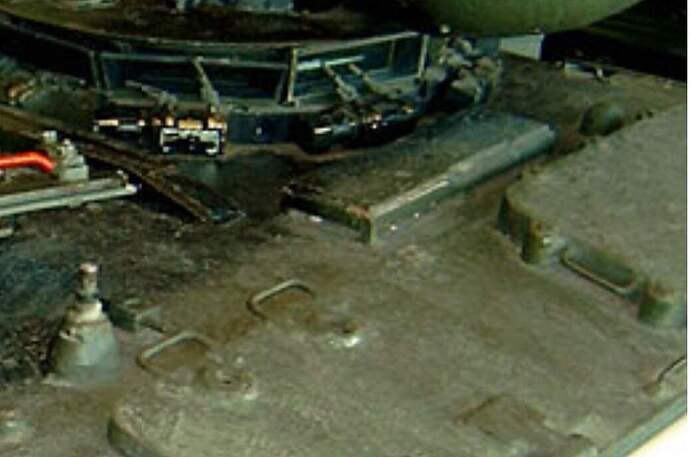 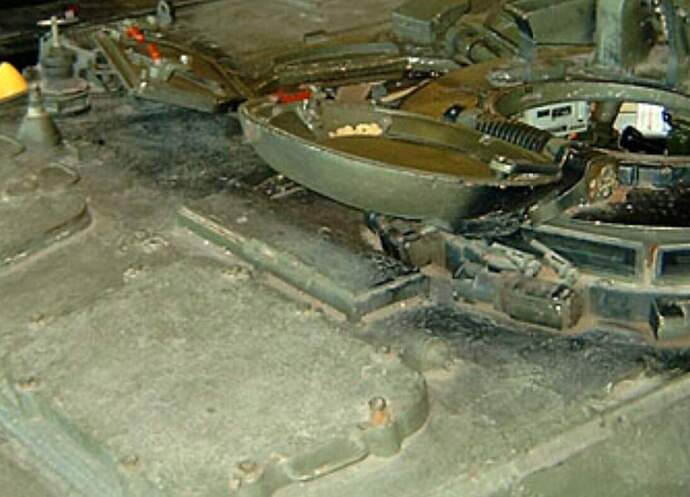 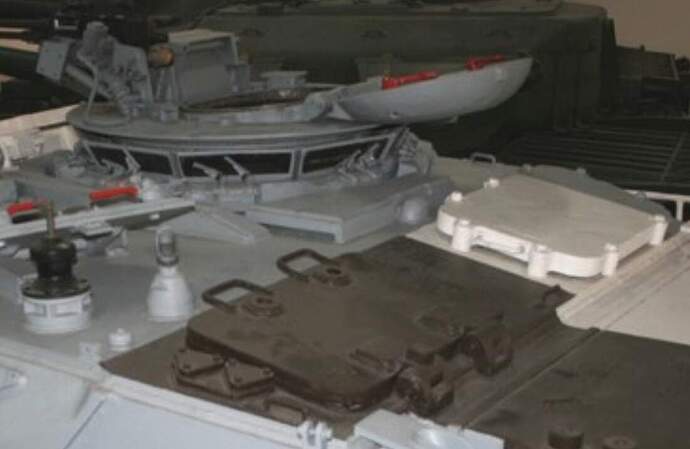 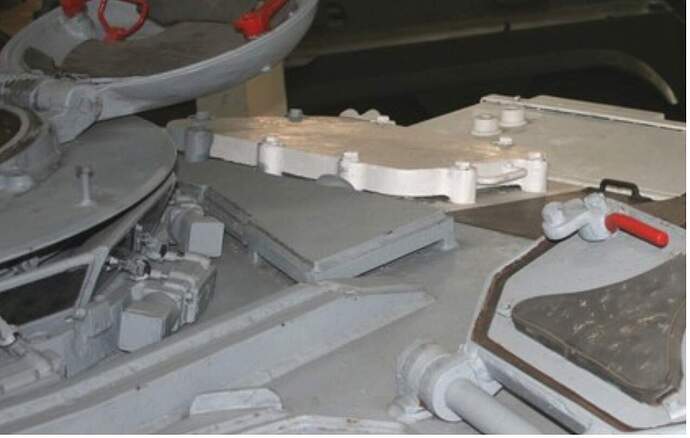 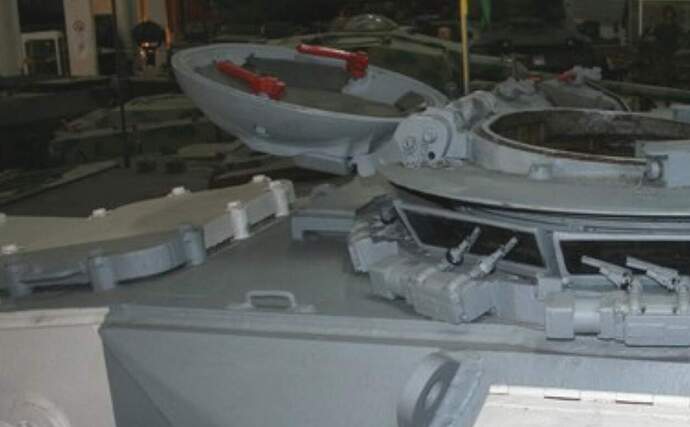 Plus each has that peculiar cutout both sides of the top plate - any idea why?

Got some work done today, made both types, painted the interior brown, not glued, pending finding out which version is installed on the Chieftain I’m modelling. 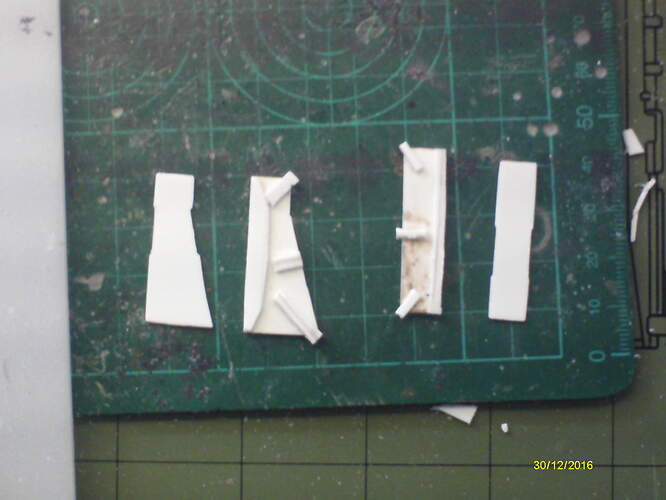 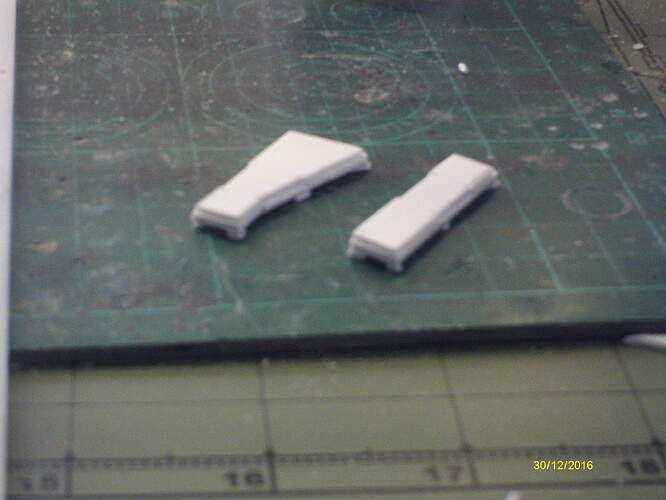 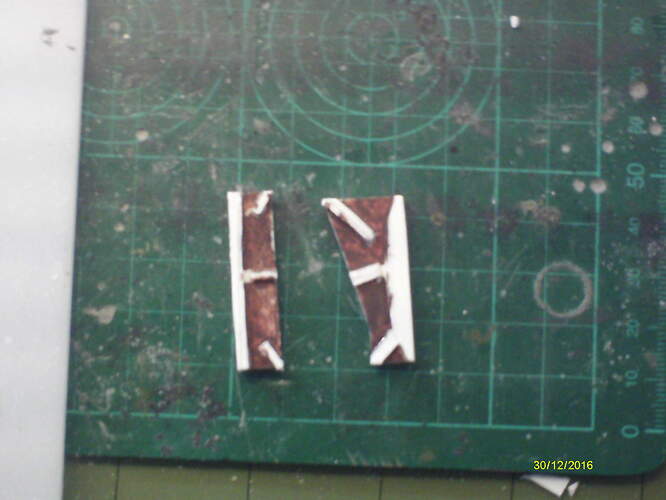 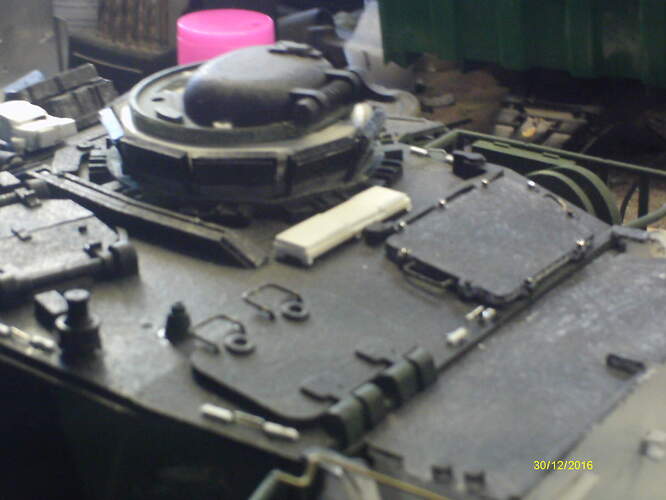 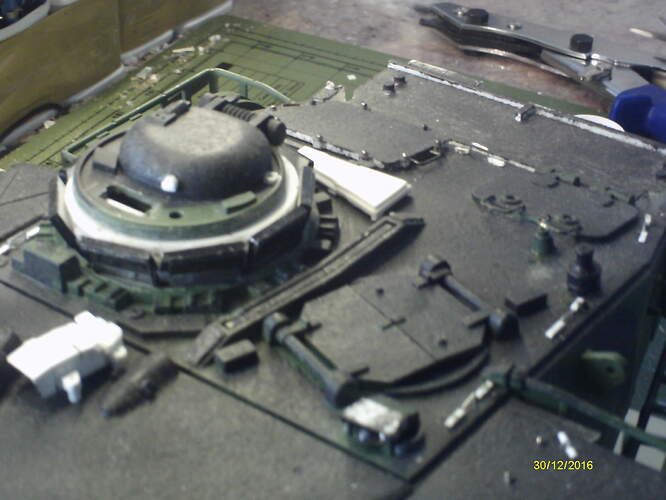 in which book is this picture of the cupola? Looks like a Tankograd magazine.

Hi Thomas
As shown mostly on the bottom of the pic - Tankograd - British Special No 9031, FV4201, Chieftain.
It’s an excellent reference work.

thanks for the fast reply. I have the book, but I don´t find the picture. On which page is it?

Thanks Mal! Got it now!

Are the valves not related to which turret production line they came off, just a thought.