Hi
As title, I’m looking for some (plausible) T-Numbers for post D-Day in NW Europe, and/or sources to verify them.

Or if someone has better eyes to puzzle this one out: IWM Video Churchill Bridgelayer

This is for a 1/35th AFV Club/IMA conversion.

As here: Churchill Bridgelayer with No2 Bridge

Grab one of the Churchill tank books, plenty of pictures with the numbers then. From library, take pictures if not a member. Not able to get to my one as packed up for moving.

I’ve checked my Tank Museum Titles, inc. Vanguard to Victory, no bridge layers of this type.

I’ve checked my Ampersand Titles, inc Churchill, pt2 variants, with some very good clear shots of a bridge layer on trials, but it’s obviously on trials & has a 00YY00 number on the side, so post-war(?)

I have a Osprey Churchill, but not found it yet.

I Think Steve Bannerman did a MilMod article, but not sure

Well, this may not help at all as Airfix produced their 1:76 on the basis of their gun tank which was a Mk VII; however, it might be conceivable that the number was filched from a Mk III/IV and merely utilised for Airfix’s purposes and they chose to depict in on their Mk VII for ease of production? Just a thought. Anyway: 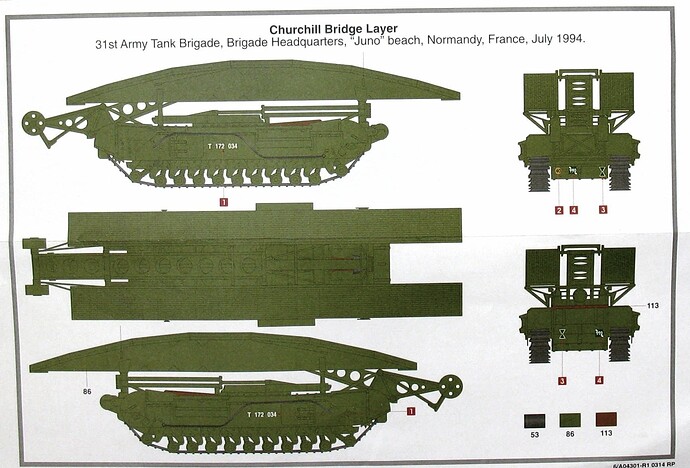 The fact that it (Airfix’s) is modelled as for D Day doesn’t preclude its use post D Day.