I have several books on the Korean War, and they only barely mention the roles of the Churchill Crocodile tanks sent there, other than they fought as gun tanks. Even the Osprey book on the Churchill fails to say much on what the Churchills actually did in Korea. Can anyone tell me where I should look?

Mr. Churchill’s Tank by David Fletcher has just 3 pages on their action in Korea. A summary:
7RTR arrived in country 12 October 1950 but had to await the tanks arrival. Many had not been touched for 5 years, so arrived in poor condition and needed urgent maintenance. Basic repairs were done so that tanks could be released for use in batches as soon as possible. The first tanks were intended to go to Pyongyang but the Chinese invasion prompted an evacuation, so No.6 troop went south - over 200 miles they travelled.

In December the squadron was in Seoul guarding the crossings of the Han River. It is at this time the flame trailers were detached - never used in theatre. One troop retained them, towed by AEC Matador trucks when needed, but due to the many accidents this practice ceased too.

First action was 2 January 1951 near Chunghung Dong. The 1st Battalion Royal Northumberland Fusiliers were under attack and one troop of Churchills was sent over frozen ground to help - took 8 hours to reach them. Using HE rounds the Churchills helped the infantry retake 2 villages with no casualty to British. They stayed until nightfall and fell back during the dark - tank commanders walking on foot to guide the drivers along the frozen track.

In February the tanks were assigned patrol duty and entered into a few engagements with the enemy but were soon withdrawn to a reserve area due to severe maintenance issues. In June they based in Inchon in a reserve roll until 8 October 1951 when 7 RTR sailed home. The tanks were later shipped back to Britain.

The answer is ‘very limited activity’. As Petbat says, they were maintenance-hungry and slow which meant that they were woefully ill-suited to the initial see-saw advances and retreats that characterised the first 12 months of the conflict. There was also only a single Squadron deployed (C Sqn of 7 RTR) so we’re looking at 20 tanks maximum.

The Commonwealth armoured contribution in Korea was the deployed (British) Armoured Regiment, with an additional (Canadian) Sqn alongside them. Both elements changed on a roughly annual basis.

A selection of 7RTR images, plus one of mine, based on Tamiya’s 1/48 scale Crocodile kit 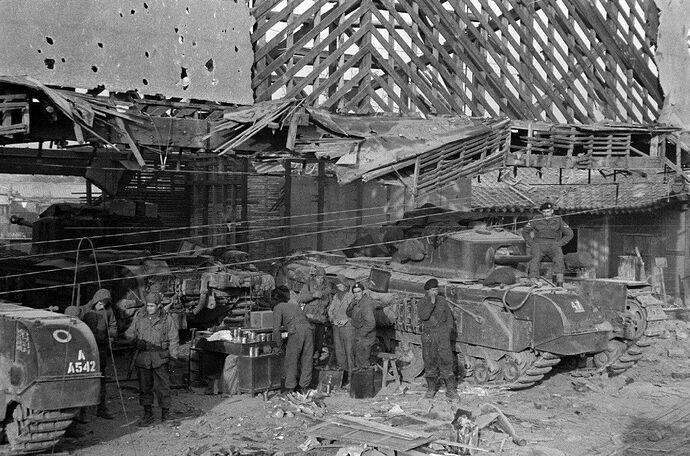 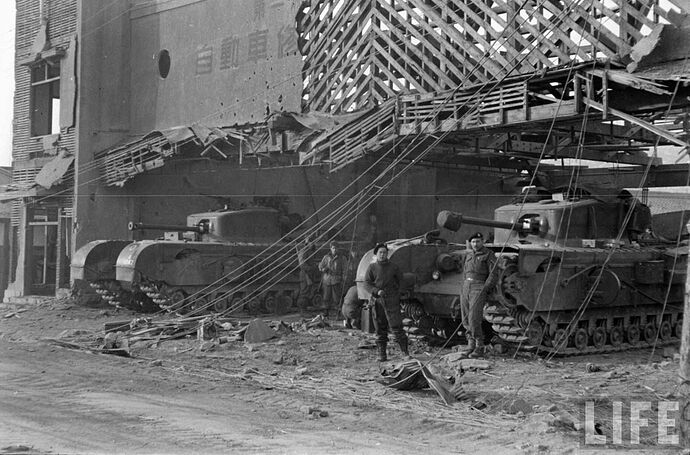 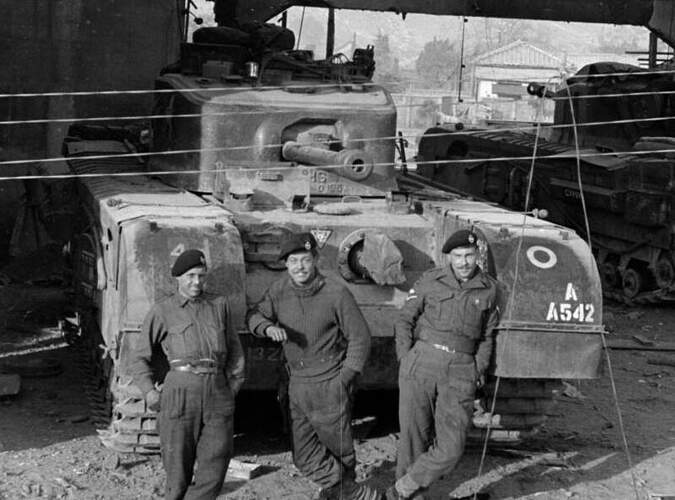 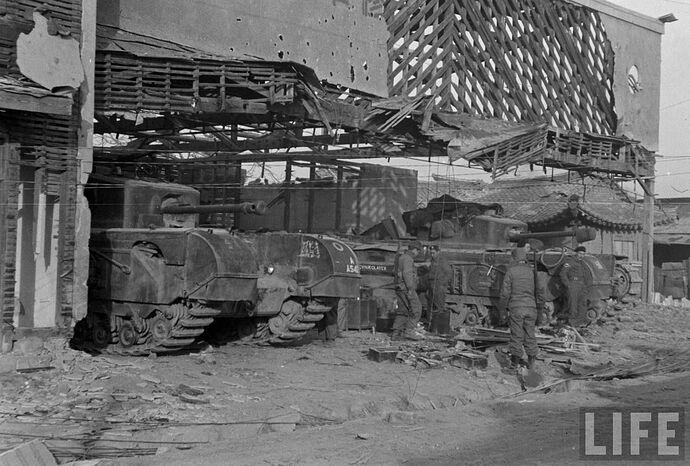 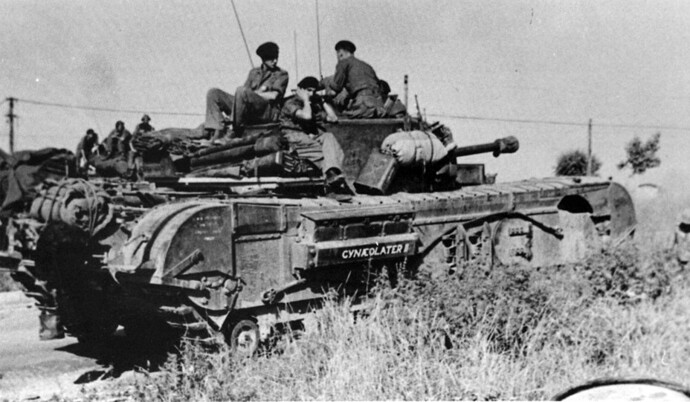 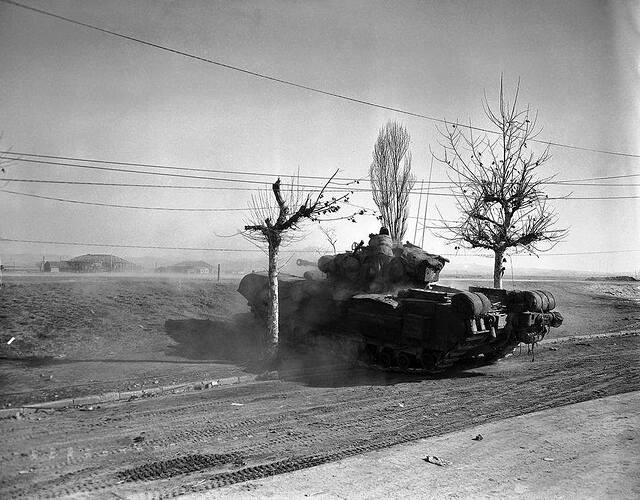 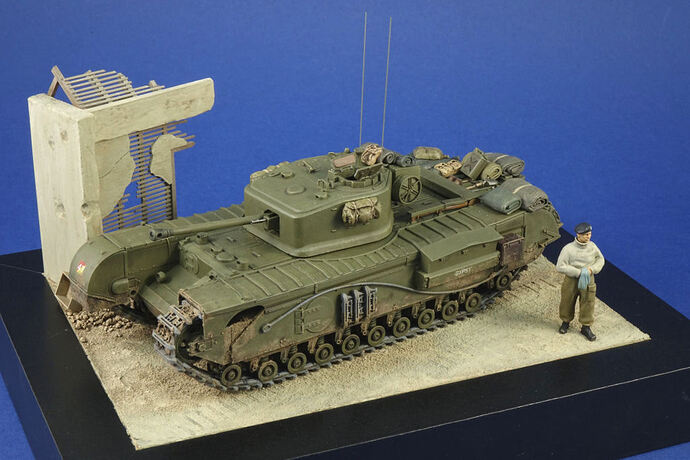 Nice model, I probably wouldn’t have put a fuel can near the exaust…

Doesn’t seem to be a colourised image 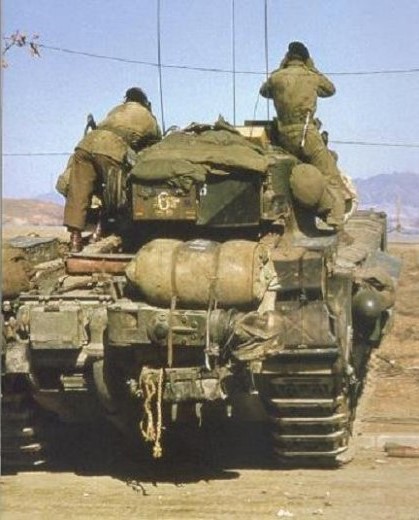 I think your image relates to this one in my post - the stowage and the pose of the guy beside the turret are too similar to be a coincidence?

Thanks for the help, but one more question. Though the instructions describe the colors of the engine compartment, ironically enough the interior of the tank itself is not mentioned. Silver? White? I know the colors were changed over wartime, and I assume the Churchills had to be refurbished before they could be sent into combat.

Silver interior, white was reserved for vehicles destined for North Africa. According to petbat’s reply the Churchills hadn’t been looked after since 1945, they arrived in poor condition needing repairs and maintenance.

Not so much ‘silver’ as painted aluminium. For a 1/76 scale project I’d be tempted to suggest light grey drybrushed or scrubbed with a bit of flat alumium paint (probably mucky and subdued in an operational front line vehicle).