I just recently bought AFV Clubs Churchill Mk.III w/Ordnance QF 75mm Mk.V gun.
I really don’t know much about Churchill Tanks. I do know that the British already had Churchill Tanks at Dieppe and in North Africa. Did the British had MK.III in Normandy? AFV Clubs manual says that the MK.VI with a new 75mm gun got introduced late 1943. It also says that some MK.III got this gun, extra armor and fought in Normandy.
I did some research on the internet and all the pictures of Churchills in Normandy i found had cast Turrets.
Reason why i m asking is: I planning on building a Diorama with a Churchill in Normady. Can i use the kit i bought for a Normandy Diorama? I’m no rivet counter at all, but i wanna use the correct Tank for the Normandy campaign.

Reading David fletchers book on the subject I would say it is very plausible that Churchill Mark III* (those with the 75mm gun) were present in Normandy. This pictures caption certainly suggests they were there 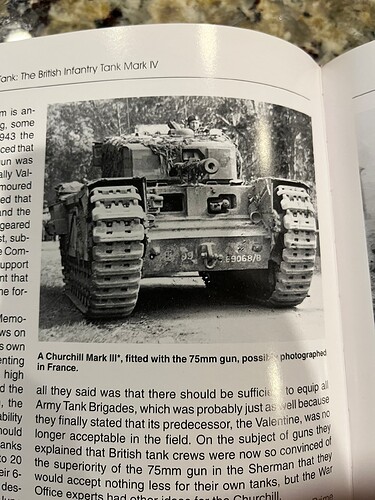 He also makes a reference to the number of Churchill Mk III reported to still be around in September 1944. Furthermore, there are references to training manuals on the mark III in Feb and March of 1944

For completeness I would hazard to guess that no Churchill Mk III with the 6 pounder were still around. The same fletcher book discusses how a large overhaul and redesign was carried out for the Churchill was carried out sometime in late 42 early 43. This was partially a result of the lessons learned at dieppe. A component of the overhaul was the upgunning of churchills to the 75 mm