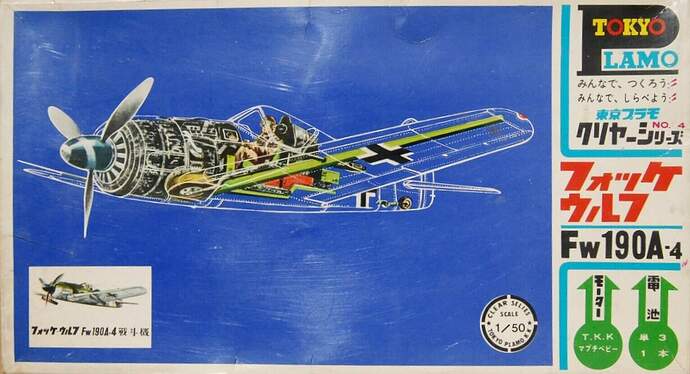 Here’s one I’ve never seen! I see where this is 1:50 scale? unusual scale to say the least.
I remember when the ‘Phantom Mustang’ came out, my Dad (former P-51 pilot) bought one for us to build together. Did you buy this kit? I’d be interested in seeing what the pieces inside the box look like.
Cheers,
C.

I have never seen this kit. I’d like to. I saw one on eBay about a year ago but it sold for a few times my annual model budget!

That Phantom Mustang was special to you and your dad, no doubt.

1:50 scale? It’s a wierdo now but back in the 1960s and early 70s, it was the standard aircraft scale for most Asian model companies. Tamiya, during my early modeling days of the early 1970’s, had a substantial line of 1/50 Imperial Japanese aircraft, the 1/50 Japanese Aircraft Series. Introduced in 1963 by the growing model company Tamiya Plastic Kogyo Co., these 1/50 aircraft were quite impressive for the time. They featured predominately raised rivet and panel lines and fit as well as any other model makers’ products. The scale is 4% smaller than 1/48 and contained as much detail as 1/48 offerings. The scale fit European die-cast models of the era. It converts easily in both metric and Imperial systems. It is interesting that concurrently Tamiya released a series of 1/48 armor models, mainly NATO AFVs, and a pair of World War Two Soviet favorites. As the standard for scales sorted itself out, 1/50 fell to the 1/48 onslaught which was taking a stranglehold on the hobby.

I think the history of scales is interesting. Why didn’t military models standardize to 1/32, which Airfix and Monogram were scaling their models, and was the same as a large range of aircraft? Because Tamiya kitted their Panther; Mr. Tamiya wrote in his company history that they made the Panther big enough to use a gearbox they had for motorizing it, and that size scaled out to 1/35. So Tamiya scaled their kits to 1/35, the world loved Tamiya, and the rest is history. I wonder how much the metric system influenced Asian companies in picking some scales but I have never read nor figured out a correlation - and I’ve tried! Did Tamiya/Fujimi/Hasegawa/Aoshima choose 1/700 for their ships because the biggest ship fit into a standard box, e.g., “box scale”, or because it was close to 1/720? If anybody has solved that mystery, I don’t know the answer.

But I enjoy pondering it.