I’m sure most of you are familiar with Lieutenant General Hal Moore, probably through either the best selling memoir We Were Soldiers Once…And Young (written with reporter Joe Galloway) or the Mel Gibson film We Were Soldiers.The film is very good but the book is even better and goes on to describe more combat actions than the film delves into.

This bust from Dolman Miniatures is based on one of the better known pictures of Lt. Gen Moore taken while he was a Colonel in Vietnam. In it he is smoking a cigar and looking over to his left. 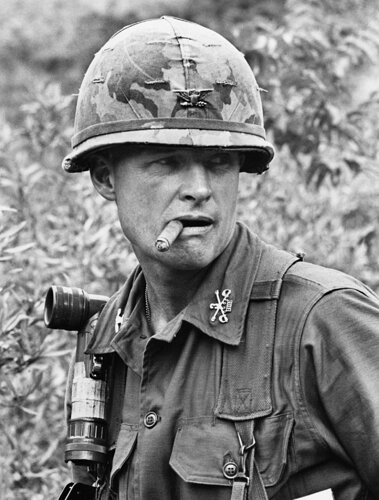 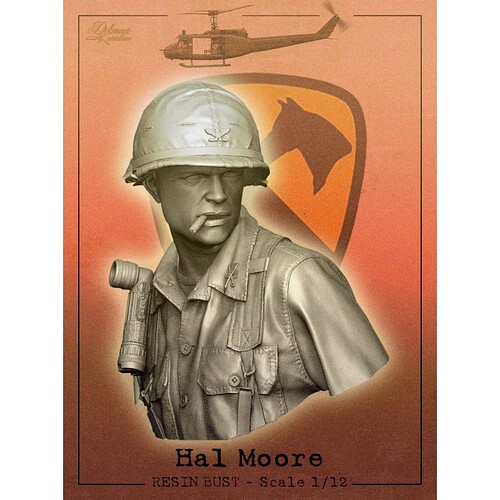 The bust came in 3 resin and 2 metal parts- the resin being the head, body and helmet with the flashlight and cigar cast in metal.
Details on all are well sculpted and cast and I think they capture the look of the picture pretty much exactly. 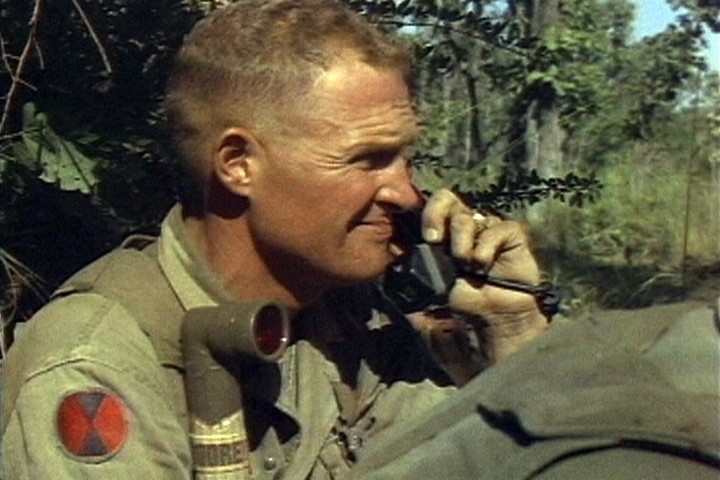 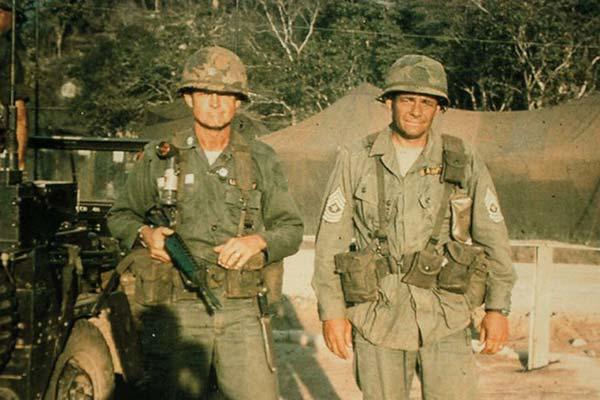 I used these color pictures of Lt.Gen Moore as a reference for how his uniform and equipment looked. Helpfully these pics also gave a good view of his skin tones which can be mostly guesswork if a black and white photo taken from a little distance is all you’ve got to go on. They also helped me out in regards to what appeared to be a name sticker spelling out ‘Moore’ around the bottom of his flashlight. From the color pics it seems to be a kind of white-yellowish masking tape.

I also tried to find more views of his helmet cover- now in a museum-and found some useful refs here.

I tried to capture the Mitchell camo pattern on the helmet as it was in the picture upon which the bust is based but the back 1/3 or so was guesswork and I have to say I found it a difficult pattern to paint. 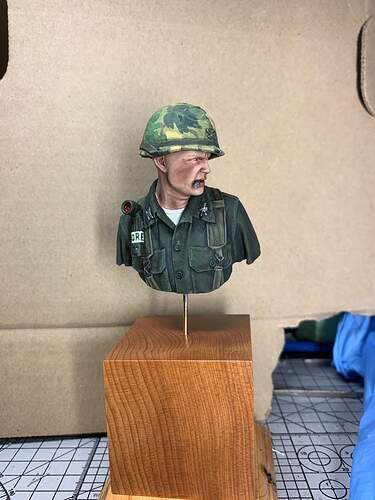 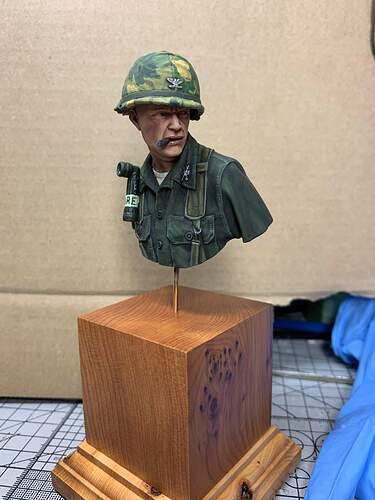 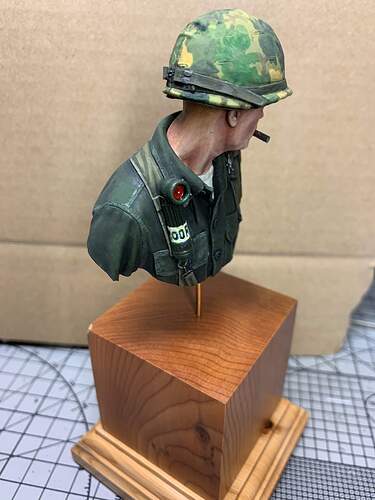 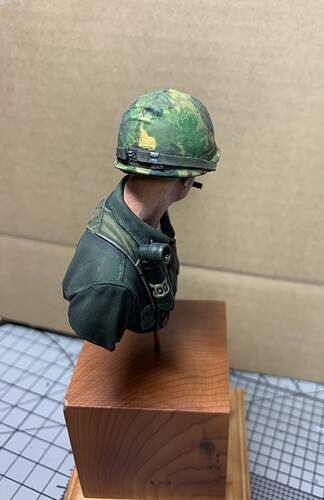 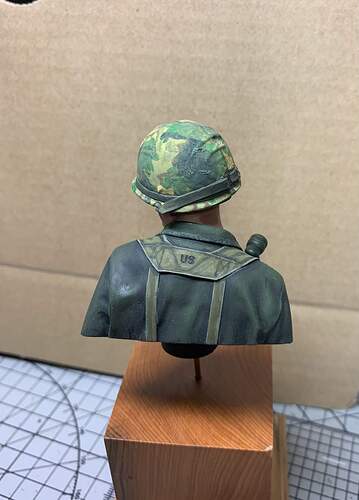 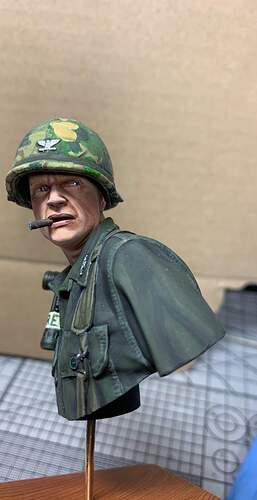 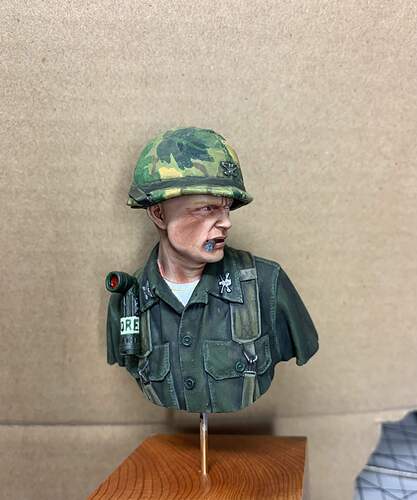 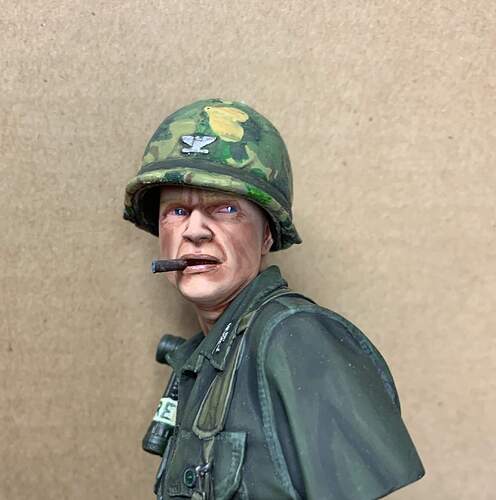 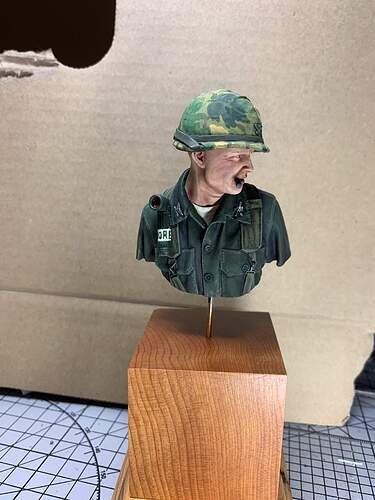 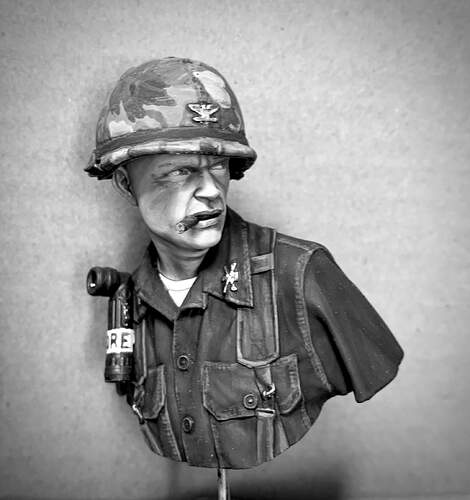 In terms of the uniform I think I have gone too dark in my choice of green when compared to the color pics above. I chose Olive Green ( Scale 75 Artist Acrylic) and it seemed a decent match but I think I went wrong in my mixing choices for shadow colours. Still getting used to these paints and, in any case, I find with every bust (and model) I paint (and build) comes a new lesson.

The torch was another paint issue- I thought I had picked the right color but think it may be a tad too dark.

Overall this was a nice bust to paint but I feel a few details could have been added in the sculpting to give it a little more interest- the previous combat unit service patch (7th Infantry) and current unit service (7th Cavalry) on each shoulder would have been nice as would the name and ‘US Army’ tapes above the breast pockets as is seen in some photos of Moore. But despite that it was and is a nice sculpt that captures the subject extremely well.

Any comments, criticism etc are more than welcome.

it looks great to me. I have to agree on the green uniform paint, a bit dark, but everything else looks good!
Cheers!
L

It looks really nice. I thought this rank badge was for a full colonel.

Very nice work. I particularly like the camouflage on the helmet, you captured it perfectly.

Karl you did an excellent job on it. The helmet camo came great.

The rank badge depicted on his helmet is of a Colonel yes, one rank above the title of the piece. Some soldiers refer to it as a “Bird” Colonel, some even calling it a “Full bird”.

Thank you Logan, very nice of you to stop by- I appreciate your feedback about the uniform

Thanks for taking the time to have a look and comment Olivier.

Thanks for stopping by Charles, very nice of you to say about the helmet camo.

I appreciate your kind words, particularly about the helmet camo as you and @creading mentioned.

My dads Navy issue flashlight that was the same as col Moore’s his that old white masking tape with inked on name. It was indeed masking tape and it yellowed really quickly so you were spot on with your guess. I remembered growing up and playing with that flashlight in the 70’s and it still had that faded yellowed masking tape on it all those years later, stuff was 10x better than todays masking tape…

Thanks a lot for explaining this- now I understand why I was thinking about it being a ‘Major’ insignia on the helmet in the museum.

Really nice of you to stop by and share that- it is very much appreciated.

Also thanks to @HeavyArty for editing the title for me.

just as important as Mr. Moore was in the photo, that’s SGT. Major Basil Plumey standing next to him. That man was a well known “beast!” We called his kind tough!
gary

Yes I read the book and the SGT Major was definitely what I would call a bad ass.
Ken as I said before you did an excellent job with it. The uniform is fine I think. I thought someone made uniform patches in this scale but can’t remember. They wouldn’t be that hard to paint . Easy for me to say lol

Yeah I still have that flashlight that I was issued many moons ago. Still works