Also known as either Netopyr or Lebedenko Tank, it was Russian armored vehicle developed, built, and tested early years of the First World War. The project was cancelled in 1915 following trials that showed the vehicle to be underpowered and vulnerable to artillery fire.

This is partial text from the full article (usually with photos) at https://armorama.com/news/copper-state-models-tsar-tank
Landships August 14, 2022, 1:52pm #2

Wow! Well done Copper State Models! I recall Stephen Zaloga’s efforts on a 1:72 version in Military Modelling way back when and thinking “All that etch?” No way. I should think the same challenges are likely to apply with a 1:35 version, but hats off to Copper State Models for something truly different.

Look very Steam Punk. It´s looks as if it could fight against H.G. Wells Martians or the mechanical spider from Wild,Wild West movie.

Please tell me it won’t have individual spokes for those giant wheels.

To be honest, given their expertise in moulding spokes, I suspect (hope) not; that said, I don’t intend getting hold of one, merely that I’m impressed that it looks like they’re going to tackle it.

Beautiful. I had a go designing one of these for Miniature Scenery a while back, but closer to 1/50. 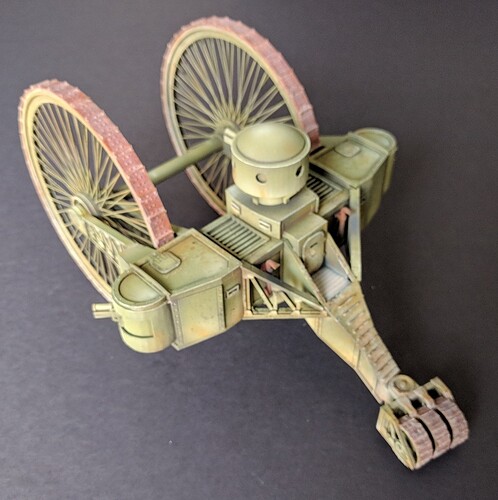 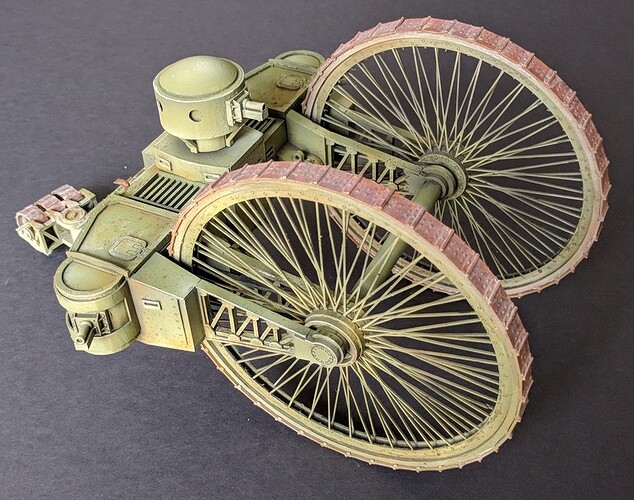 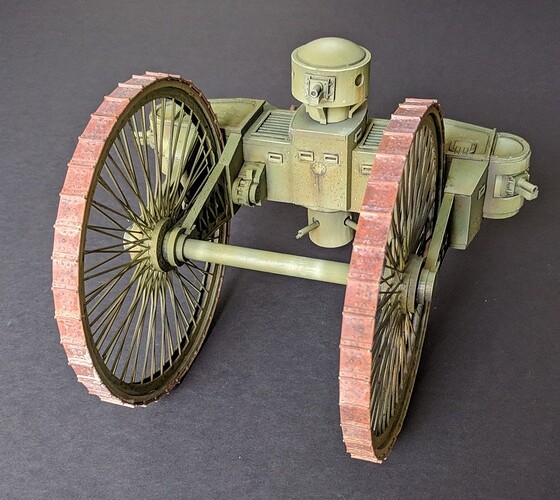 It’s an interesting challenge working from about 3 existing photos and a ton of conflicting reference. If I had to guess, I’d go with pie shaped sections of photo-etch spokes for the wheels, but would also be impressed by a price under $200.

I must admit I find it quite interesting in that it pre-dated trench warfare (up to a point) so one could just see how it might prevail on the then battlefield, those massive wheels rolling over barbed wire, trenches, craters etc, yet at the same time drenching everything with MG and cannon fire; hmmmm. Of course, I suspect it would have needed a more effective engine - power to weight ratio and all that - than it had, but one could sort of see the possibilities. Just imagine half a dozen of these looming out of the smoke, gas etc once the artillery barrage had ceased. You’d run a mile!

Now there’s a diorama that would impress(!)

Some comments on the model:
1 Nice to see the wheels finished off with wooden tracks and not metal as we have seen on other tanks;
2 It would appear that the large springs on the rear wheel have been dispensed with - that detail never made any sense without a hinged joint.
3 The steps on the way up to the cabin do not tie in with the photographs at all! They look very clumsy for a 1/35th scale tank. Neither is there a hand rope on the side.
4 The rear wheel is again shown in three pieces. Looking at the photos, it would appear to be one piece.
5. The spokes seem very thick!!

There are many things about my model that are not quite right. There are certainly many details that are simply made-up, but seemed logical to me at the time. The final drive housings, for example, add a fun bit a detail.

Most importantly though, is that this kit design is quite limited by the materials we produce kits in (3mm MDF and 1mm Card) , making for a chunkier experience overall. There are a few 3D printed parts, but they’re confined to things like the guns (yes, a bit late in pattern…) and the citadel dome.

I’m hugely looking forward to the copper state kit. They will have been able to do things that I couldn’t.