I need your help to identify a tool I remember seeing at a ship modelers workshop a long time ago (in the eighties). He had a mini lathe that could make identical copies of cannons or masts, from blueprints or from physical examples. It used a C shaped tool with the top end of the c being a knife for the lathe and the bottom was a stylus he would run along the blueprint (or maybe a wooden form?).

Now I was young at the time, so this may all be a figment of my imagination, and various internet searches provided nothing (there are mechanical copy lathes but they are too big and expensive).
Does this thing exist?

Woodsmith sell plans/instructions for building a contraption for woodworking: 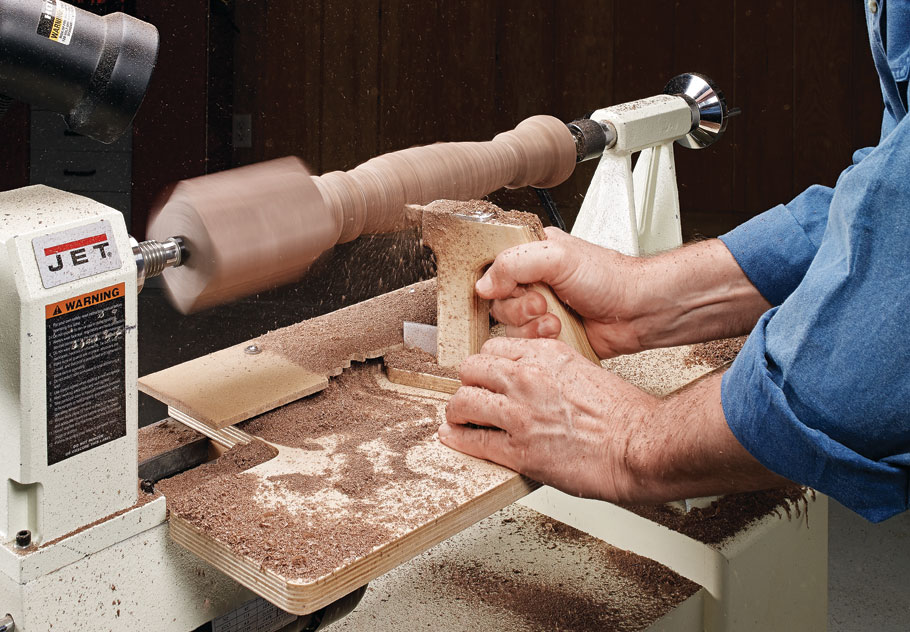 When it comes to making duplicate parts on a lathe, like legs for a table, getting them all to look the same can be a real challenge. The simple design of this duplicator takes the guesswork out of turning copies. It mounts to the bed of your lathe...

Should work with styrene as well and possible maybe if for soft metals but I doubt it.

Thank you both for the replies, the link Robin sent looks the most like what I remember, just smaller. Now if someone would know if the same can be done on a mini lathe and for soft metal stock… 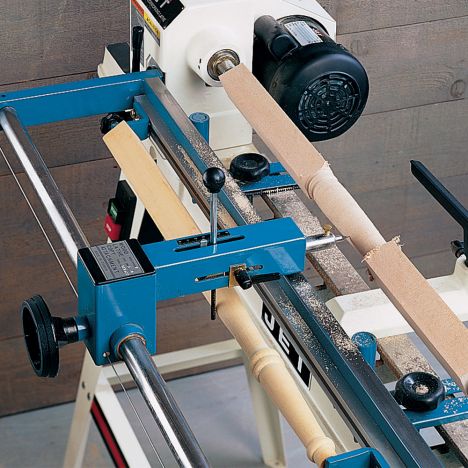 One good turn deserves another! Create precise duplicates of spindles, table legs and other turned projects.

For a mini lathe it is “simply” a matter of scaling it down.
Soft metal will be trickier.
Take a look at the tool holder on your mini lathe. It holds the tool
at the correct elevation and some handwheel or similar moves it in-out.
The tool holder can probably also be rotated.
To copy a profile you need something to guide the in-out movement of the tool.
Bypassing the original mechanism is probably not possible and would require you to
replace it with something equivalent → basically a non starter.

What might possibly work is to attach some kind of template tracker to the tool holder and use it to guide You when turning the handwheel to move the tool holder.

Considering the amount of work to construct and use such a tool
I think that good quality calipers, a good drawing with measurements,
some “production planning” and working methodically is an easier,
cheaper and more reliable solution.

For small parts, like cannons, I’d suggest going the route of turning a master on your lath and then casting resin copies using an RTV mold. There are also high-temp RTV’s that can be used for white metal casting if metal is actually required (although once painted…).

Making a tool for a miniature lath small enough, precise enough, and durable enough to do this sort of job would require considerable machinist skill. It could certainly be done, though. I’ve been using a Unimat lath and milling machine for model making since the mid-80s, and I don’t think that I have the tool and die making skill to make something like this that would be precise enough to satisfy my own modeling standards.

On the other hand, I know that I could turn the masters and cast them in resin (or get them cast for a reasonable fee since purchasing the casting supplies is often much more expensive than just paying someone who does casting on commission).

For small parts, like cannons, I’d suggest going the route of turning a master on your lath and then casting resin copies using an RTV mold.

Particularly because parts of a cannon – in particular, the trunions, and depending on scale, the lock or the relief around the touch-hole – will be inconvenient to do on a lathe. Mounting trunions on a master and molding that will be faster than adding trunions to each turned piece.

There’s also the option of 3D printing the objects; cannon barrels with an FDM printer (again depending on scale) you could have problems printing the trunions unless you split them in half, but a resin printer should be able to print a small forest of them standing on the muzzle.

Thank you for all the replies, I always preferred the turned barrels over any resin castings, and i have always wondered how some of the companies can make turned barrels at such a low price (RB models for example). Considering what you guys told me, they are probably using a CNC lathe, and for small scale production a 3d Printer is the better/cheaper option. I never was a fan of resin castings for machine parts, as they never look straight/angular/mechanical enough due to casting limitations, but they are great for figures/organics.