What is it officially? Forget about photographs, especially in the bright sun, because I see a gazillion shades. Anything official? There are a gazillion light tan hobby paint colors too.


This is the US Federal official. The most widely used I believe is the Tan 686 camouflage and Dark sandstone camouflage. Though they have more sand/tan and any of them would look good for me.
1 Like
Stikpusher December 12, 2020, 3:44am #3

The closest model paint color I have found is FS33531 Sand. To my eye, it matches current vehicles perfectly.

I used to use actual MilSpec spray paint that matched perfectly. Unfortunately what’s perfect for a 1:1 vehicle is not necessarily appropriate for a 1:35 vehicle. Scale effect is a very real phenomenon. You can see it for yourself just by looking at two vehicles at a car lot that are different distances away. (I recently re-tested this when looking to purchase a sand colored Tacoma. Too bad they dropped it from their 2021 line up)
The FS numbers listed above work - I’ve use them. But you’ve still got to play around with them to get the look you want.
I’ve got thousands of photos of sand vehicles, and of those, many parked side by side that are different. This isn’t due to the sun, or my camera, they are simply two different shades of sand. While I don’t have time today to search for them, I’ll show this one from Ft. Carson. Not only are the two vehicles different shades, one exhibits two shades on the same vehicle. I don’t beat myself up over color much. I just do what looks right. 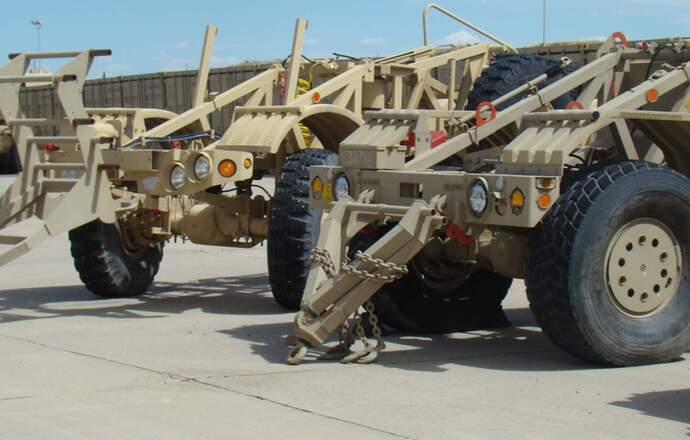 That darker one almost looks like 30277 Sand, the color used in MERDC. It is a bit darker and grayer than the CARC Sand.

I actually live not far from an Illinois National Guard base, where some smaller vehicles such as Hummers are kept. The colors do vary slightly, so I can fudge a wee bit when it comes to color choice.

In 1/35 scale, I use either Model Master enamel 1963 Modern Desert Sand or Tamiya acrylic XF-78 Wooden Deck Tan as a base, pin wash with raw/burnt umbra, then either dry brush or use pastel chalks for highlights. I’ve been happy with results compared to pics of vehicles in the field.

I decided already to go with the Wooden Deck Tan. I have a M117 Guardian now and will have an Egyptian M1A1 Abrams later.

Recall that U.S. Sand Color also depends on the lighting in the model’s scene, meaning you can vary the tone of the color if it’s cloudy in your vignette or bright and sunny. A little tone variation can make your collection look more interesting than kits all painted in the same U.S. Sand Color.

Searching through my reference photos for other things I’ve discovered it’s damned near impossible to not find examples of different shades. I don’t even have to look as they’re so prevalent.
This one I found this morning - two shades on one vehicle: 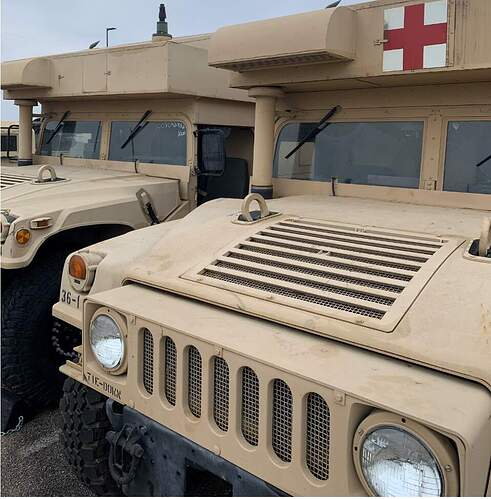 image958×974 116 KB
Or even mo’ betta, three shades on two vehicles, all in the same photo - base HMMWV shades differ, and ambulance superstructure yet a third, slightly darker shade: 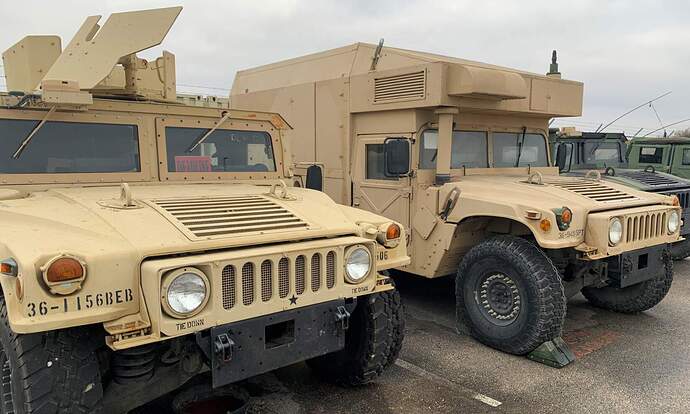