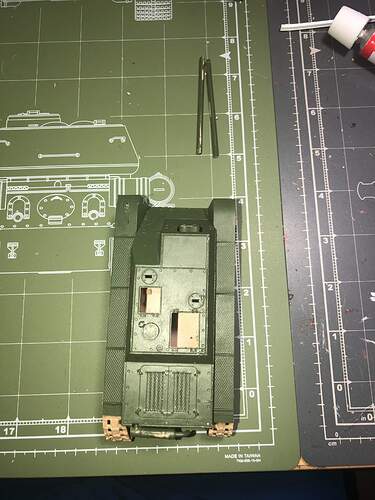 image3024×4032 906 KB
I am presently fixing this kit from my butchered state. I started it in 2020 and got the road wheels and suspension buffaloed. I got to where I was ready to put the track on it and then realized that I had messed something up because I didn’t have enough track for one side let alone 2. So everything stopped until I could find my mistake.

Finally I realized I had put the suspension on wrong placing the vehicle to high off the ground! So I cut everything off and put it away for a good while. I started on it again last week and over roughly 5 days and probably about 5 hours a night I super glued everything back on into approximately the right position and then started playing with the kits track links which are small for my sausage fingers and immediately started to worry about the number of links I had. Possibly some went into that convenient dimension that takes our parts. So started looking to my collection of spare parts and found the track for a panzer 2 Ausf F/G that I have from Tamiya that I have metal track for so I figured that it’s a paper panzer anyway and rather tiny looking at it not really sure what the designer was on at the time but I don’t think it would be very nice to be in anyway. It mounts 2 88’s I think

not really sure on that one. But I got two barrels for it although now I’m not sure if I’ll change them for a couple of metal barrels I have here for my various projects. Actually that thought just happened because I’m just finished cleaning up the barrels.

What I am looking at since obviously

I butchered the suspension and used the better part of CA glue and accelerator to get it somewhat resembling the manufacturers picture even with the borrowed track and that was certainly no fun assembling either although faster than what the metal one will go.

I think the instructions and the images in them are themselves lacking continuity. But it maybe

user error also. So keep in mind this is a rescue mission in process and the colour scheme is undecided at this point. I am heavily leaning towards adding schurzen from a Stug that I completed without. I have way to many of those along with Sherman’s, Churchill’s, and panzers from the mark 4 through the king tiger and all the main sp guns at least for AT… 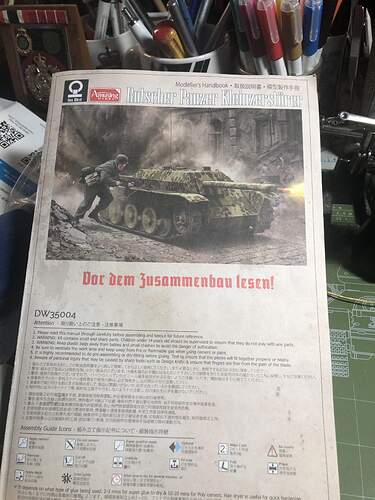 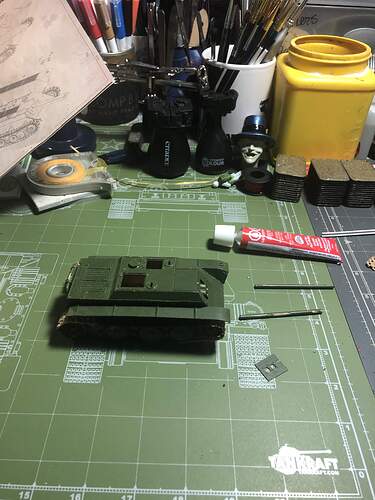 Apparently as far as I could see on Google as the planets aren’t aligned for my internet. This was supposed to have two 75 mm stuk 40 L/43 or some sort of fin stabilized mortar shell an 8 PAW or something to that effect. Anyway they term it as an E-5 type of anti tank sp gun. Don’t think it would hold much in the way of crew. Pretty small.

Looking good. I have been working on the same kit for bit also. My limited understanding is it was to be like first gen recoilless rifle. Crew was to be two members. I have mine as allied captured with two Dragon figures.

Well this morning I decided that I would keep at it. I didn’t really like the barrels so I found a pair of 50 mm KwK 39 L/60 originally for a VK 1602 Leopard and I added a coax MG 34 to it. Can’t really go to far off the tracks being a paper panzer.

@Tank_1812 I hope you had an easier time with the suspension! I’ve been kicking myself for a good 10 months or so for such a rookie error. I must’ve crossed some wires between instructions and installation.

@Chris_Bryan appreciate the support definitely will keep it going now I got the wind back in my sails!! 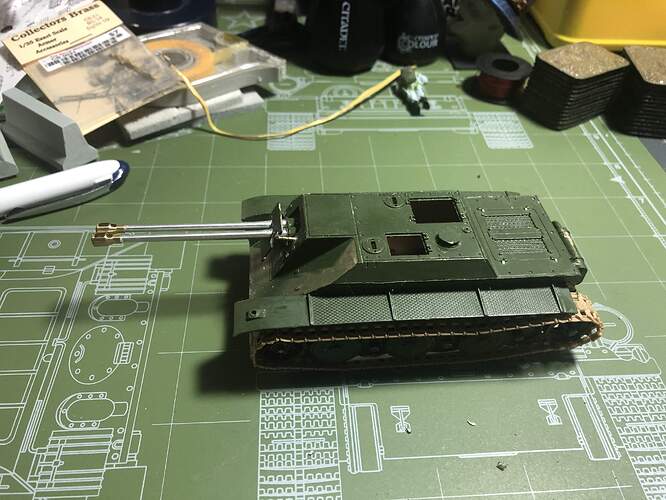 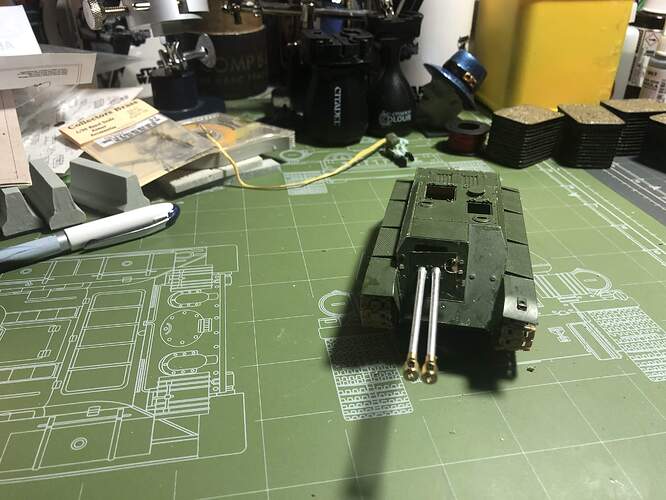 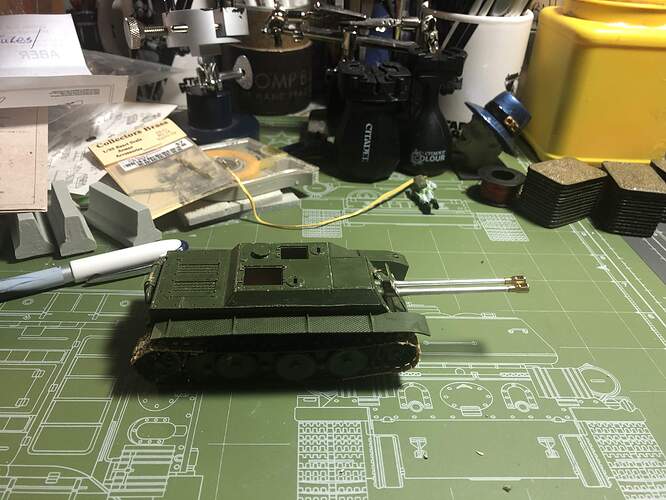 I don’t recall to many issues with build. Hope you don’t mind. 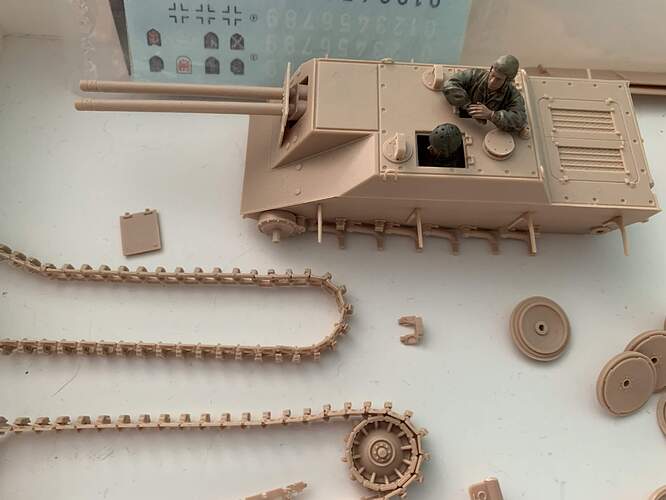 Not at all it’s nice to see another in progress. I haven’t figured out what figure I want to put into it as of yet. Also it’s nice to know I’m not the only one that enjoys Amusing Hobbies kits since they definitely have a lot of strange kits. I’ve got several in my rather extensive stash. Although lately I’ve been a sucker for Bren gun carriers, helicopters and of all things orks from the war hammer universe.

My eye wonders to much sometimes. Usually my wife is pretty tolerant of my addiction to all things styrene. My daughter is getting me back into rocks and polishing something I haven’t done since I was a kid. To many projects and not enough time in a day.

No problem anytime you want to update your progress your very welcome to jump in here. Maybe one of us will think of something the other didn’t!!

My one recommendation on the figure is to check its fit before joining the halves. The hatch is small for the Dragon figures especially the driver.

The other Das Works kit I have is the Wanze, it will be a Russian machine. That one is not a paper panzer.

I closed it up way to early so the driver is buttoned up and for the gunner I reversed the hatches so I can have the guy sitting out of it. Just working on the brackets for the Stug schurzen of course I can’t spell it so opps! I’ll look for some smoke grenade launchers or something along that line. I’m figuring on mounting a roof machine gun. Not quite sure what else then I will have to decide on a scheme for it. And find appropriate decals. I have picked up the majority of kits from amusing. I’ve done the VK-7201(K) panzerkampfwagen VII put a 120 mm gun on it, I have the tracks to do on the big mortar they have on the 38t chassis.

I’ll give you a couple of shots of those. But I’ve picked up pretty much every interesting one they’ve released so far. Lots to do for sure. 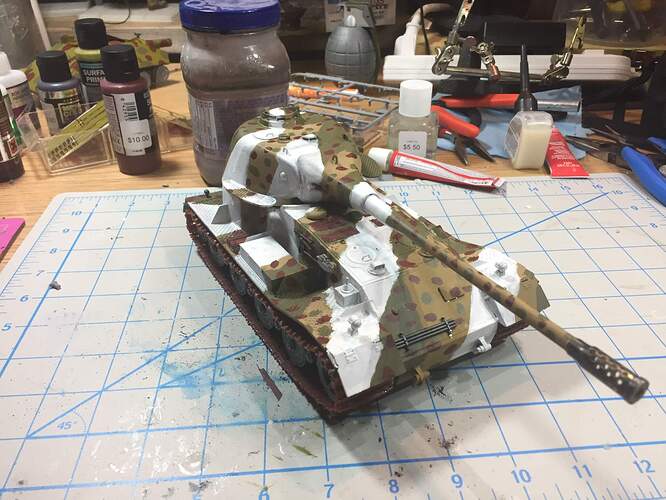 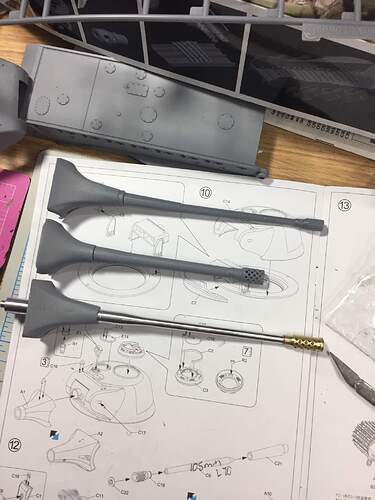 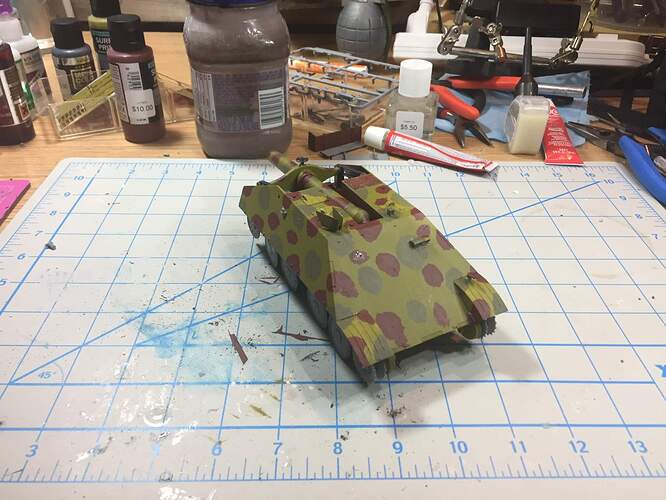 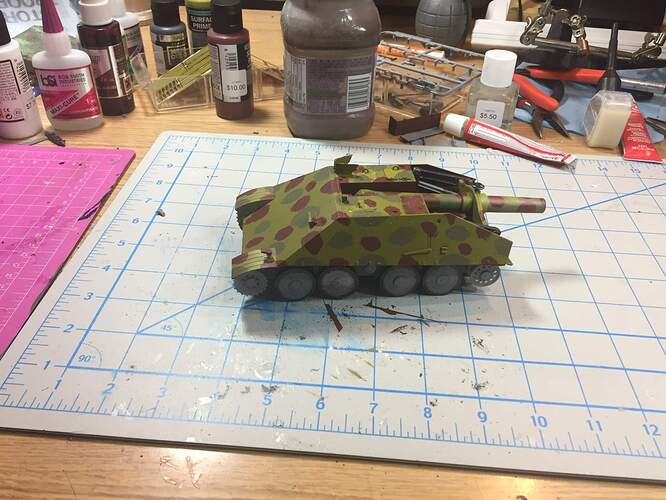