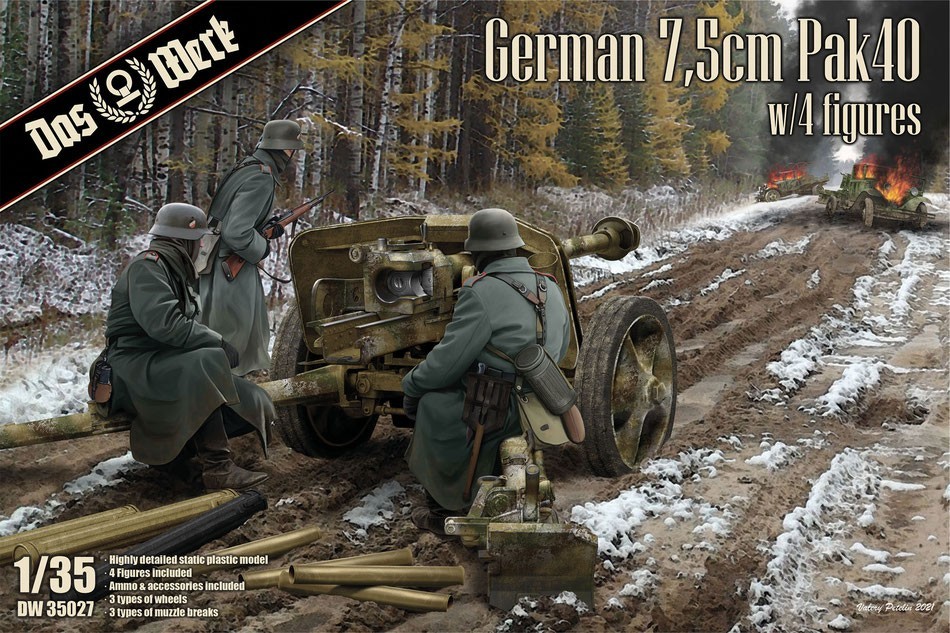 This is partial text from the full article (usually with photos) at https://armorama.com/news/das-werk-german-7-5cm-pak-40-gun
2 Likes
BringupthePIAT February 4, 2022, 9:38am #2

Its always a strange feeling to see an iconic model from your childhood replaced and superseded. I reckon every single person who reads this has built at least once the Tamiya 80s classic of this gun and I still maintain it holds up okay even now if you do it right.

But I have little doubt this will be a much superior kit now as it should be. It would have been cool to have the option of the spoked wheels instead of the metal ones just to give a different look but the ones with the kit look good.

I do wonder if we might see an updated Tamiya release as they did with their Kettenkraftrad recently. They have a few long-in-the-tooth WW2 German subjects that are sorely in need of a redo now, not least their 88mm Flak36/37 and their sd.kfz.251 and StuG IV. They’ve already redone the Kettenkraftrad, Jadgpanzer IV, Jagdtiger, Panzer IV ausf D etc. More surely to follow.

We’ve seen Border in particular go after these kits pretty hard - their new Mobelwagen is a brilliant kit and I have no doubt their Jagdpanzer IV will be excellent too, the 88mm am not sure as it is based on an older Dragon offering.

I’d love to see Tamiya really do the business on a remake of the iconic 88mm and perhaps their Pak-40 too. These are like old childhood friends to me now.

I believe I did the old Italeri kit back in the eighties… Memories, memories

This kit is in all likelihood the Dragon kit, based on other recent releases from Das Werk (M48 AVLB, RSO). Dragon’s Pak 40 had three types of wheels and three different muzzle brakes as well, and included a sprue of shells, ammo boxes and ammo canisters complete with decals.

Not a bad thing, as Dragon’s kit is/was the best available, but not without some minor issues like most kits.

As far as I know, and from what I have read, AFV Club kit is better than Dragon…
I have not built Dragon Pak40, but AFV Club is definitively close to perfection.

Love the figures on the box art.

The first Dragon kit had issues that were subsequently fixed in later releases. AFV Club’s kit is better with regards to the gun shields and some of the finer details, but Dragon provides far more options for wheels, tires (worn or not, which are also included it appears in the new Das Werk release), muzzle brakes (and the muzzle brake detail is better then AFV), cradle end cover, optional heights for the wheels/axle, etc., plus of course the ammunition.

So if nothing else I consider them equal, but the options that Dragon gives pushes me towards those kits, since I can easily fix some of the minor issues they still have.

By rumours I have heard that Das Werk has a deal with Dragon regarding mold sharing. That would explain the Kettenkrad as well as the re-release of the RSO and other new kits from Das Werk. Consequently this PAK 40 kit might be a re-release also of a Dragon kit.

Yes, same here; but where’s the fourth figure in the box art?

And yes, I built the Tamiya one. One the Dragon one. And the Italeri one. Those were the days.

The forth figure is just out of view, pointing at something.

Sorry for the bad joke

The figures are a modified set of Dragon’s # 6190, Frozen Battleground (Moscow 1941).The figures were modified like this before, in Dragon’s 1/35 6640 7.5cm Pak 40/4 auf RSO kit. The NCO is not holding his MP-40. The left-most kneeling figure has had his rifle removed, presumably because he is operating the gun. The two figures on the right have had their rifles replaced with shells.

Love it. Laughing at all the “Pointing Germans” never gets old. You would think the figure companies would be listening. No other army in 1/35 has come close to their pointing prowess.

Here’s what Das Werk stated on its site:

In cooperation with a well-known manufacturer, we present the best model of this gun in a new edition.

This is the old Dragon kit reboxed.

Lots of Polish guns on the market these days (versions of Schneiders, Skodas etc) but little in the way of gun crews. If the box art is anything to go by these guys could easily be converted to Poles.

I like the AFV combined with K59 extensive upgrade. Wheels are easy, either go to Hussar which has Pac40 wheels, or raid another kit. However, AFV has several in the kit. Back in the old days there were great reviews coming out of Australia and here is a bit of one from PMMS if you want accurate lengths.
The two trailing arms attached to the rear of the lower carriage have separate rear spades, grab handles and other fittings but comparing these to 1/35th scale plans in the Nuts & Bolts Vol.18 Marder III book and scaled up Bellona 1/48th plans plus the corresponding parts in the AFV Club and Tamiya PaK 40 kits sees the Dragon trails some 13mm (1/2in) longer, that’s 13mm in real size not a scale 13mm which is quite some discrepancy ( see image ).
The AFV Club trails incidentally were spot on to the Nuts & Bolts plans with the Tamiya only very slightly longer while both the AFV Club and Tamiya trails also have the weld seam that runs the length of the trail arm but this is not on the Dragon trails.

As per the notes in the PMMS review, Dragon correctly the trailing arm lengths (and other parts) in the subsequent releases of the Pak 40.